Yes, that really just happened on "House of Cards" 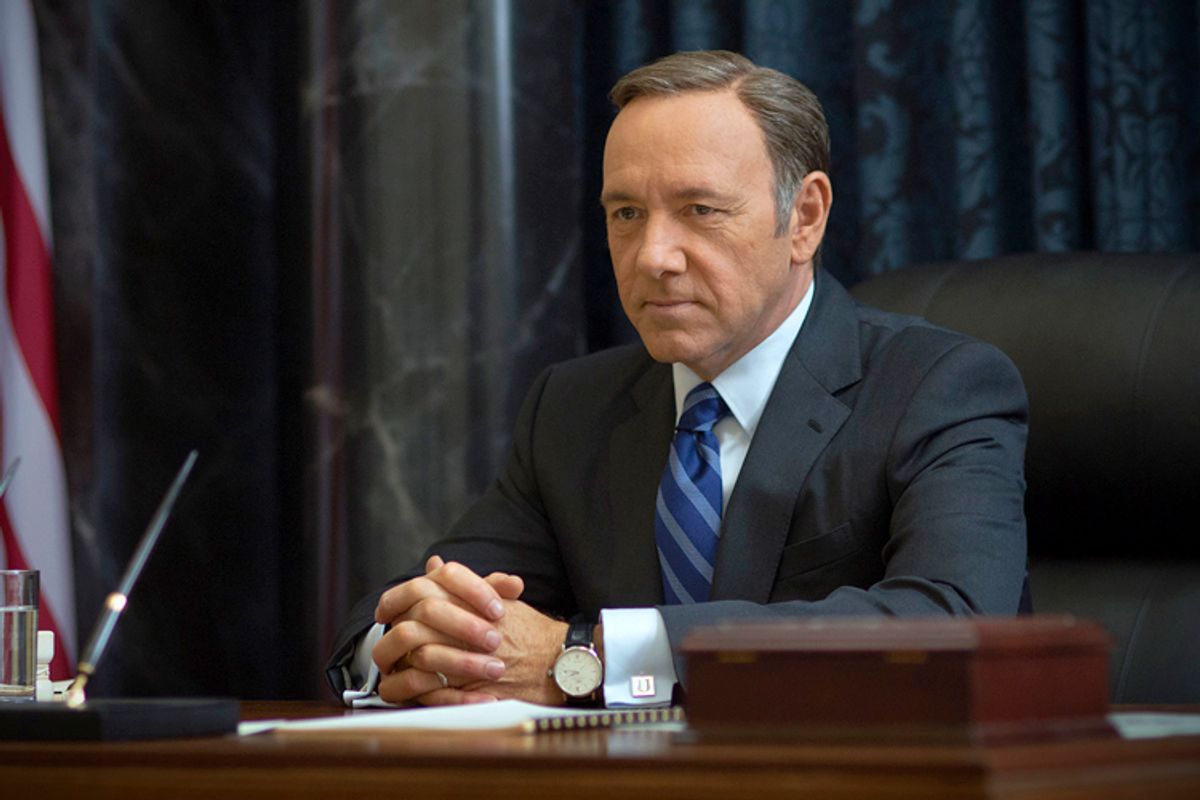 "House of Cards" has kicked off its second season with its biggest shock yet. We're going to go into details about what happened and what it might mean going forward, so those who haven't streamed the season's first episode yet, stop reading now.

Seriously, I mean it.

That's right -- as reporter Zoe closed in on the story of Frank's connection to the death of Peter Russo last season, he asked her to meet to strengthen their partnership. She was willing to delete their past correspondence to prove her loyalty, but her questioning after that made Frank more and more nervous. The fact that their meeting was in a secluded subway station, just on the edge of the platform, made his work easy.

This is a talker of a moment for various reasons, not least because Zoe, played by Kate Mara, was the breakout character of the first season. Mara sat for profiles to promote the new season that ran in New York magazine and GQ quite recently. Her and Frank's relationship -- one that was alternately or all at once transactional, paternal and sexual -- resulted in both characters rising in their fields and a twisted sort of chemistry blooming. The show will feel her loss deeply, and it's hard to recall a show that dispensed with such a pivotal character with so little fanfare. This is as though "Breaking Bad" had killed off Jesse, the junior partner in that show's central relationship; that show's creator famously decided the chemistry was too good to let Jesse go early.

The act also would seem to reinforce a growing desperation in Frank Underwood, played by Kevin Spacey. Over the course of the first season, our protagonist groomed Peter Russo as another supplicant, and when it was more convenient that Russo die, Underwood set the whole thing up, but it felt methodical, the result of considering all the options. It was a turn in the plot that made a sick sense, and the pleasure (such as it was) was in seeing how Russo's death had been, in retrospect, unavoidable. At least as framed in this episode, Underwood's is a split-second decision, one whose consequences he may not have fully considered. One of, now, the most famous politicians in America killing Zoe in public and then striding away only partially obscured seems, on first watching, a foolhardy decision.

Netflix front-loading such a "water-cooler" moment, though, raises new questions about just how one can talk about a streaming TV show. Many, many people have attempted over the years to set forth rules about spoilers -- here's perhaps the best instance -- but it's generally agreed-upon that viewers of a narrative drama series should get a little time to catch up, but not that much. How can a "House of Cards" viewer speak to a friend who also watches the show but, confronted with a 13-episode monolith, decide to wait until later in the weekend to commence? Presuming that the season continues to up the ante and that eventually Friday night people went to sleep and restarted the series on scattered times Saturday and Sunday -- and some, as you read this, want to start watching but haven't had a chance yet -- when will any of us know when it's safe to discuss whatever's going to happen in episode 6, or 11?

The answer seems to be that this is uncharted territory. There's no safe way to talk about the events of "House of Cards" -- at least without a lot of advance warning. Released before a three-day weekend during which many will be huddled up, alone, against the cold, toggling through it at their own respective paces, "House of Cards" and its undiscussable twists perfectly match our era of isolation.