Dunn created the confrontation, then made it deadly. Under Florida's insane laws, the prosecution was still limited 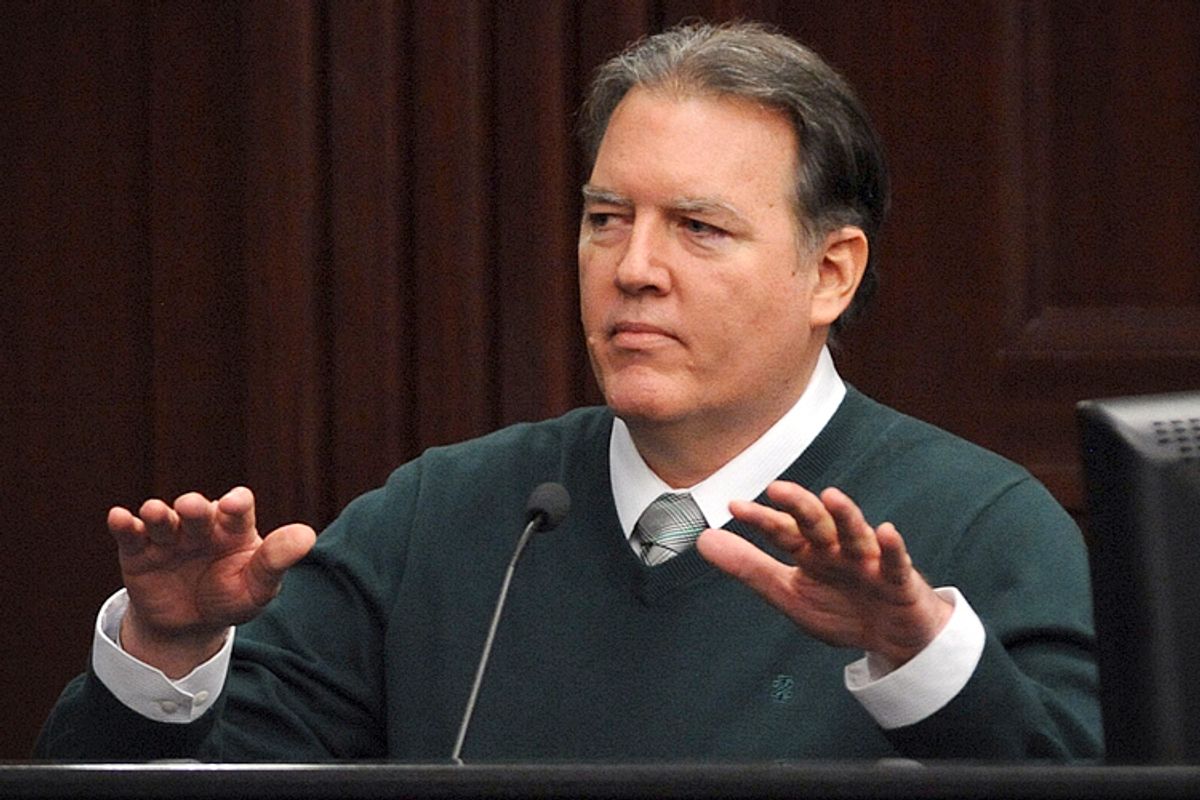 The failure to convict Michael Dunn for shooting Jordan Davis to death in the course of an argument over whether the 17-year-old and his friends were playing their car stereo too loudly illustrates that, as a practical matter, hot-blooded murder is often perfectly legal under Florida law – and that of many other states as well.

Criticisms of the jury fail to appreciate that the prosecution was faced with an almost impossible legal burden in this case, and only Dunn’s decision to fire three more shots at a fleeing vehicle (after he had already emptied seven of the bullets in the gun’s clip when killing Davis) kept him from escaping any punishment at all.

Unlike the George Zimmerman trial, the Dunn case featured a straightforward application of Florida’s "stand-your-ground" law. That law works like this: If Dunn had a reasonable fear that he was about to suffer “great bodily harm,” then he had a legal right to shoot Davis to death, rather than, for example, choosing to protect himself by driving away, even if Dunn knew that driving away would have protected him from harm.

If you think that sounds crazy, you haven’t heard the half of it. Because the "stand your ground" law creates an affirmative defense for criminal defendants, the prosecution had to prove beyond a reasonable doubt that Dunn’s claim that he had a reasonable fear he was about to suffer great bodily harm was false. Such laws, in effect, put the victim rather than the killer on trial, which is exactly what happened in this case.

Consider how these laws work in the context of Dunn’s actions. Dunn chose to create a confrontation with a group of four young males. He is a middle-aged computer programmer. A middle-aged man who chooses to start a verbal altercation with four teenage boys in a convenience store parking lot on a Friday night knows that he is running a non-trivial risk of suffering great bodily harm, or in non-technical terms, getting his ass kicked.

But because this is America, Dunn has a trump card: the nine-millimeter handgun in his glove compartment, with 10 bullets in the clip, which he has every legal right to bring to the confrontation he chose to start.

And because this is America, the fact that Dunn is white and the teenage boys are black – black boys playing loud “thug” music, to use Dunn’s description – makes it seem “reasonable” to him that the confrontation he started is about to escalate to a point where he will suffer great bodily harm. (In America, being a black teenage male playing loud “black” music in an SUV in a convenience store parking lot on a Friday night makes you a fearsome figure to a middle-aged white man like Dunn).

Furthermore, because this is America, it’s reasonable for Dunn to fear that the scary black boys playing the scary music are armed. After all, there are more than 300 million non-military firearms floating around out there between the purple mountain majesties and the amber waves of grain. That’s no doubt one reason why Dunn has gone to the trouble of securing at least one of them for himself, and (again, perfectly legally) sticking it in his glove compartment, so that it’s within easy reach should he choose to get into a war of words with some black teenage boys in convenience store parking lot on a Friday night.

In sum, under the laws of the state of Florida, it was always going to be extremely difficult for the prosecution to prove beyond a reasonable doubt that Dunn wasn’t in reasonable fear of suffering great bodily harm. And if the prosecution couldn’t prove that, this means Dunn had the legal right to choose to kill a teenage boy – to “stand his ground” -- rather than to retreat from the confrontation Dunn started, even if retreat was a perfectly viable option (which to all appearances it was).

As a practical matter, Florida’s laws give people like Dunn a license to kill anyone they are “reasonably” afraid of. This means that, since the prosecution could not prove beyond a reasonable doubt that Jordan Davis was not guilty of the crime of being a black teenage boy playing loud music in a convenience store parking lot on a Friday night, Davis’ murder will, at least for now, go unpunished.