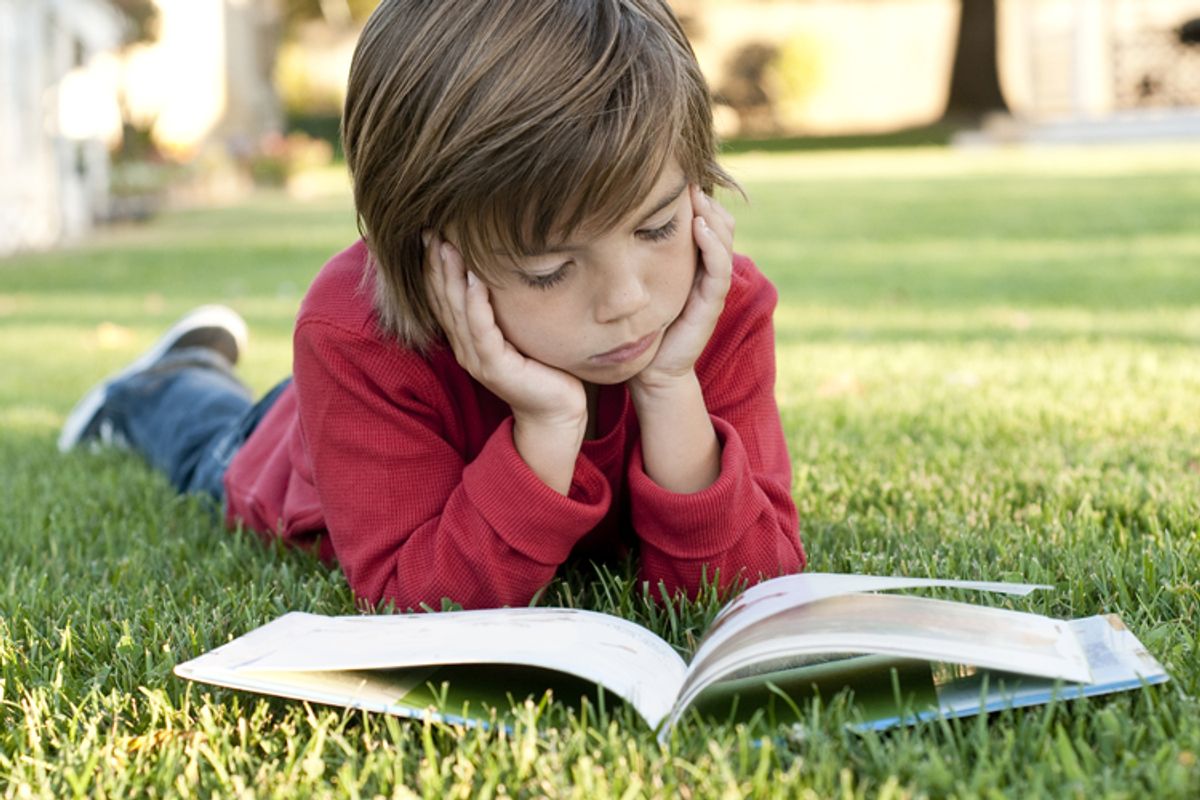 If you’ve been out of school for a while, your memory of time spent in classrooms may be bathed in a nostalgic glow. In reality, though, you probably spent a lot of your time looking at the clock, bored out of your mind. Most students are expected to sit in chairs and pay attention for as many as eight hours per day--and that is even before taking homework into account. Considering these long hours, it’s no surprise that many students report feeling bogged down by drudgery. An Indiana State University study found that nearly half of students feel bored everyday, half of students report skipping school at least "once or twice," and 20 percent consider dropping out entirely. Disengagement is -- and perhaps always has been -- one of education’s greatest quandaries.

But what if the problem with school is the building itself, the brick-and-mortar structure wherein rows (or sometimes semi-circles) of desks face an oppressive whiteboard?Erin Kenny, the founder of the U.S.’s first “forest kindergarten,” Cedarsong Nature School, thinks that is exactly the problem. She established her “forest kindergarten” on Puget Sound's Vashon Island in 2007. Rain or shine, the school operates entirely outdoors, serving children ages two to six. Every day, parents drop their children off at the trailhead, and the kindergarteners proceed to a day of place-based, naturalist education on Cedarsong’s five acres of forest. Kenny reports that engagement is high and credits the student-led, outdoor curriculum.

“As soon as they are interested in a subject and they light up about that,” said Kenny, “that’s when you want to move in and dispense accurate naturalist information because that’s when the deep learning is taking place.”

At Cedarsong, Kenny explained, each season offers a new opportunity for naturalist study. In October, the students observed that the insects disappeared, the trees lost their leaves, and an abundance of mushrooms and seasonal mold covered the forest floor. They spend much of their time in free-play. “The mud puddle is a huge draw for kids, of course,” she said.

Kenny got the idea for Cedarsong while trying to find a preschool for her own son that provided the kind of outdoor exploration opportunity that she had grown up with in Canada. At first, she wasn't sure how the public would react. “We’re such an indoor culture,” she said.

Six families joined Cedarsong in its first year. The next year, enrollment doubled. Currently, the school operates at maximum enrollment, serving 48 families, two-thirds of whom commute from off island. This kind of educational experience is part of a growing outdoor movement in the United States, one that includes names like Montessori, Waldorf, and Reggio Emelia.

Increasingly, there are programs aimed at older students as well. Through the Edible Schoolyard, children at the Martin Luther King Jr. Middle School in Berkeley, California, engage in hands-on environmental learning in a community garden, and apply this knowledge to their traditional academic subject areas. (For example, chemistry is taught in the kitchen when students bake wholewheat soda bread.) The program has inspired affiliate programs in New York, New Orleans, Los Angeles, San Francisco and Greensboro, North Carolina.

The Mountain School gives high achieving high school juniors the opportunity to work on a farm in Vermont for a semester; and at the Millbrook School in New York, students learn biology at the school’s zoo -- which houses 180 exotic and indigenous animals. Expeditionary Learning Outward Bound works with over one hundred schools in the New York to transform classrooms into centers of “expeditionary learning,” and 94% of their 2013 graduates of “high need” students were accepted to college.

Similarly, Deep Springs College exemplifies successful integration of hands-on outdoor work and rigorous academics. Nestled deep in the Deep Springs Valley of California, the college is a two-year program that sends many of its graduates on to Ivy League universities and counts a federal judge, a congressman, several novelists and CEOs among its graduates. The school is so locationally remote that Internet is received by satellite, and cell phones are utterly useless. Its program centers on three pillars: academics; the labor program in the garden, ranch, or farm; and self-governance. “Deep Springers,” as the students are called, rise before sun-up, take classes between breakfast and lunch, and spend the afternoons doing assigned chores.

Jared Daar, who went on from Deep Springs to graduate from Harvard in 2012, explains that in addition to a traditional education “grounded in the great books,” he worked in the labor program as a dairy farmer and an irrigator, helping to grow the ranch’s alfalfa crop. Although Daar has no plans to pursue a career in ranching (he currently works at a law firm), there were relevant takeaways from this work -- most notably, “the ability to ask questions judiciously” and “working collaboratively.” Deep Springs, he explained, “invites you to be self sufficient in a totally different way.”

“In the labor program,” he went on, “things break and you’re put in situations where no amount of talking is going to fix them.” For example, “your dairy cow could get mastitis and you have to figure out how to administer the right treatment.” Asked which was more rigorous, Harvard or Deep Springs, he answered without hesitation: “Deep Springs.”*

Author and environmentalist Richard Louv is one of the major advocates of outdoor education. In his books, he argues that children and adults in the United States suffer from “nature deficit disorder,” and cites a study conducted by the American Institutes for Research of at-risk students, which found a 27 percent improvement in science-related test scores after they spent a week in outdoor education programs.

Other research presents similar conclusions. A study by the State Education and Environmental Roundtable of found that students participating in nature-based learning programs did better than their peers 72 percent of the time in measures of academic achievement, and that their attendance was 77 percent better than the control group. Cornell University environmental psychologist Nancy Wells likewise foundthat being close to nature can boost children’s attention.

In Louv’s 2011 book, "The Nature Principle," he argues that outdoor learning works because it “demands better use of the senses.” He cites an 18-month study of 800 military personnel, which determined that the best bomb-spotters were people who lived in rural environments and regularly engaged all their senses. The children who “were raised on Game Boys," by contrast, "lacked the ability to detect nuances” in their environment, and were focused on the “screen rather than the whole surrounding.” Louv argues that natural environments promote “involuntary attention” or “fascination,” which enables us to be more alert.

Increasingly, studies are uncovering the behavioral benefits of time spent outdoors. Research out of the University of Illinois found that outdoor play can relieve the symptoms of attention deficit disorder. Louv cites Hotchkiss Elementary as another example. Before implementation of its environment-based program, teachers made 560 disciplinary referrals to the principals office in a single year. After the program was implemented, that number dropped to 50, and Louv quotes Gerald Lieberman, director of State Education and Environmental Roundtable, saying that “both the principal and teachers attribute these decreases in behavioral problems to students’ increased engagement in learning.”

Angela Duckworth, a leading education specialist based at the University of Pennsylvania argues that “grit,” or the ability to work diligently toward a long term goal, is the greatest indicator of future success, both academically and professionally. To understand the nature of grit, I shadowed an 11th grader at a private high school in Washington, D.C., whose students are unquestionably gritty. They sit still in class all day, respond thoughtfully to the teacher’s prompts, play two to three sports per year, and are engaged in extracurriculars. At lunch, a group of five students told me that on average, they do about three hours of homework per night. They are also busily preparing for the SATs. One girl had traveled to an “SAT bootcamp” in Boulder, Colorado, and plans to work with a private tutor during the year.

There is a line of argument that runs like this: Results can only be achieved through extreme discipline; and, as a result, perhaps a certain level of boredom is to be expected in education. However, an essential facet of grit is the ability to self-regulate, to manage emotions and delay gratification. And, as psychology researchers from Notre Dame point out, “The right brain, which governs much of our self-regulation, creativity and empathy[...] grows through full-body experience.”

While the classroom may be making these students “grittier” -- preparing them for their probable futures as office-bound desk jockeys -- it is simply not good for them physically. A 2010 study by the American Cancer Society indicates that men who sit for more than six hours a day have a 20 percent higher mortality rate than men who only sat for three hours per day. In women who sit for six hours, that number goes up to 40 percent. By my measure, on the October day when I visited that private high school in D.C., the students sat for just under seven hours. Three hours of homework would jump that figure to ten.

If we can extrapolate from the 11th grader whom I had shadowed, those hours are riddled with boredom. Even though said teenager is “a good student,” she explained that her parents are “the ones keeping me on track" -- constantly monitoring her performance on tests, quizzes, and papers.

"They definitely nag me,” she said.

But what of students whose parents don’t (or aren’t in a position to) keep track of every quiz, or lack the funds to send their children to SAT bootcamp? In schools that cater to “at-risk” youth, engagement is considered the frontline in this education battle. The Office of the State Superintendent of Education reports that over 40 percent of D.C public school students drop out. Nationally, the dropout rate for black students is currently being measured at 38 percent. That figure is 32 percent for Latino students.

As students progress through the educational system, engagement problems worsen. Gallup recently released a survey of 500,000 public school students that reports steep decreases in engagement from 61 percent in middle school to 41 percent in high school.

Heeding these warnings, some schools that cater to this “at-risk” demographic are implementing hands-on nature-based education in the hopes of boosting engagement. Richard Louv highlights an effort in New York to enliven the study of biology by linking 10 inner-city schools with eight upstate schools who work on a joint project to raise trout and replant streams. They raise the fish from eggs, monitor their well-being with a “trout-cam,” and cultivate their habitats. In the spring, all the schools meet in the Catskills to release the survivors into the wild. Like the “Deep Springers,” these students are motivated by community mission that has real-world implications.

One of the main drivers of engagement is this feeling of relevancy, the sense that what you are learning has a relationship to the real world. When I asked the student I shadowed at the private school what her favorite subjects are, she answered that they were environmental science and Spanish, for exactly this reason. “I can apply it to my life outside,” she said.

Carol Carpenter, communications director for NYC Outward Bound, explained to me that her organization's network of public schools seeks to make the curriculum taught in schools relevant to the students’ world. Since many of the kids in one of her schools live near the Gowanus Canal, students learn about the canal’s water quality in science class; about the sociological effects in the humanities classes; and about the canal’s design in art class. “We believe in field work,” said Carpenter, “in getting out of the classroom and getting your hands dirty.”

The most glaring unknown from all of this is whether this model is scalable. We built schools with a particular model in mind -- a brick one to be exact. Is it impractical to try something so radically different? Carpenter argued that this is very scalable. “[Outward Bound] is a part of a national network of around 165 schools," she said.

"This is already happening.”