Giving climate science deniers like Marsha Blackburn a platform isn't a debate, it's a joke 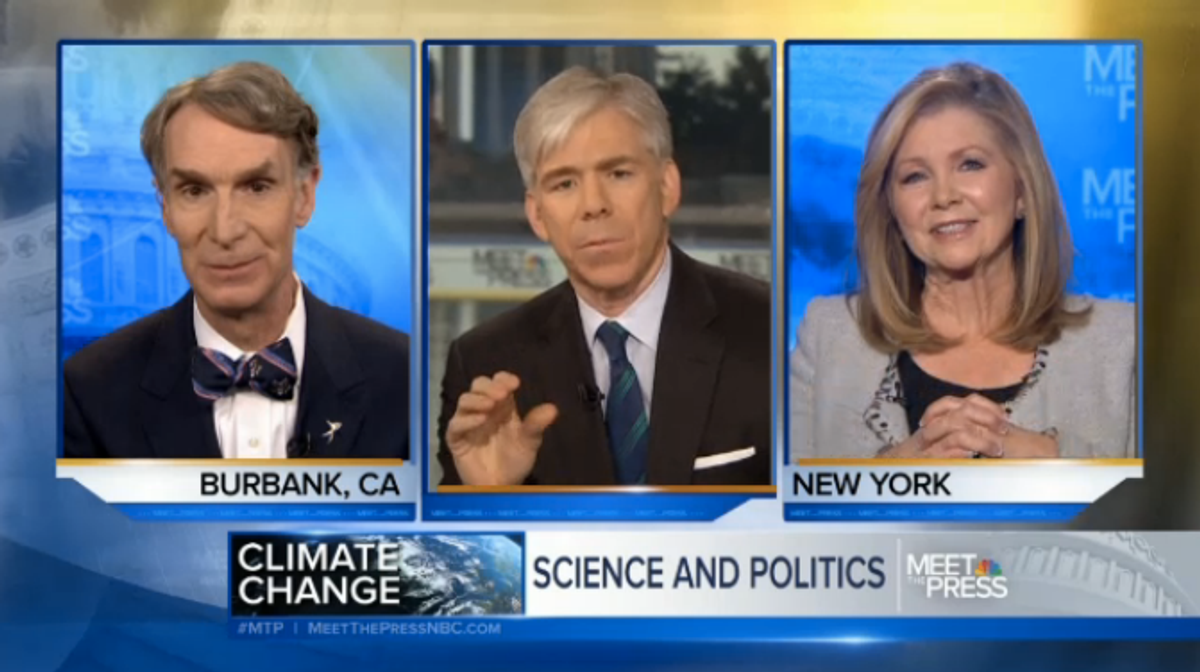 Why did "Meet the Press" call what transpired Sunday between Bill Nye and Marsha Blackburn a debate?

What actually happened was Nye, a children's television host who is a science educator but not a climate scientist, spent 15 minutes trying his very best to convince Blackburn, a Republican member of the House with zero scientific credentials, that she should listen to the 97 percent of climate scientists who have concluded that human activity is warming the planet and that the consequences of that warming are going to be catastrophic in the relatively near future.

Before we get into their "debate," let's pretend for a moment that David Gregory invited Nye and Blackburn to "debate" the actual weather, and not, as he put it, "the politics of weather." Nye, citing 97 percent of available thermostats, argues that it is 30 degrees in Washington, D.C. Blackburn, citing 3 percent of thermostats which have been proven faulty in the past, counters that it is 110 degrees. Gregory, who wore a thick winter coat and narrowly avoided ice slicks on his way into his D.C. office, then facilitates their "debate" on what the actual temperature is, being very careful to make sure both sides are given equal room to make their point.

We would never indulge such inanity about actual weather, and yet we continue to pretend climate science deniers hold credible ideas that are worthy of being heard and considered. And we continue to take people like Blackburn -- who unlike Nye, has actual control over our climate policies -- seriously rather than putting them to bed.

So back to Sunday, which was a disaster.

If you watched Nye "debate" Creation Museum founder Ken Ham, then most of what he said will sound familiar. But even if you didn't watch Nye in conversation with Ham, his position should be familiar because, again, it is supported by 97 percent of climate scientists.

"[Congresswoman Blackburn] is trying to introduce doubt. Doubt in the whole idea of climate change," Nye said in response to Blackburn's false assertion that there is not majority consensus around climate change, which was indulged repeatedly by Gregory, who noted that "climate skeptics" agree with Blackburn.

"So what I would encourage everybody to do is back up and let's agree on the facts," Nye continued. "Would you say that the Antarctic has less ice than it used to? When you asserted, Congresswoman, that a change from 320 to 400 parts per million is insignificant, my goodness. That's 30 percent. I mean that's an enormous change. And it's changing the world. ... There is no debate [about that] in the scientific community. And I encourage the Congresswoman to really look at the facts."

Blackburn repeatedly bristled at Nye's appeal to "really look at the facts," which surprised precisely no one. “There is not consensus there,” said Blackburn, who cited two climate scientists to make her point. But as Ned Resnikoff at MSNBC points out, one of these scientists was described as “wrong about nearly every major climate argument he’s made over the past two decades,” and another recently acknowledged the very real impact of carbon emissions, saying, “it’s clear that adding more carbon dioxide to the atmosphere will warm the planet.”

Perhaps realizing that Blackburn would never concede the point (and perhaps also realizing that giving Blackburn a platform to spew pseudoscience was an embarrassing joke), Gregory pivoted to the existential question at hand: What is to be done?

According to Blackburn, very little to absolutely nothing. Because averting climate disaster could be kind of expensive. (So is war, among other horrible policies that Blackburn supports with some regularity, but why even make that point, I guess?)

Then Blackburn called carbon emissions a good thing. "Now, you know, when you look at the social cost of carbon, and there is a lot of ambiguity around that, what you also need to be doing is looking at the benefits of carbon and what that has on increased agriculture production," she said.

At this point, Nye's eyes got wide and it looked like he was going to throw up. (Check the video, he really looks faint around 10:44.)

Blackburn further explained that she believes taking action to address climate change is probably pointless because she isn't sure if such action will work fast enough to prevent disaster. To which Nye replied, sensibly and earnestly, bless his heart, "The longest journey starts with but a single step. We all have to acknowledge that we have a problem.  And I think it would be in everybody's best interests ... to get going.  To just do, as I like to say, everything all at once."

The entire exercise was a joke, of course. But to be fair to Blackburn, she did make one solid point during the "debate," pointing out that neither she nor Nye are climate scientists. She's right. Nye has his evidence down, and is an earnest advocate with the support of climate scientists, but the fact that a children's television host is leading this "debate" only enhances the impression that the entire issue is a joke.

Nye is a smart guy with great intentions, but he should not be the face of this movement. But that isn't on him, it's on "Meet the Press" and others who are willing to treat climate change like some spectacle sport and not a global catastrophe.