The school shooting that wasn't: When a lockdown isn't worth it

A news investigation put my kids' school on lockdown. Where's the line between keeping kids safe and scaring them? 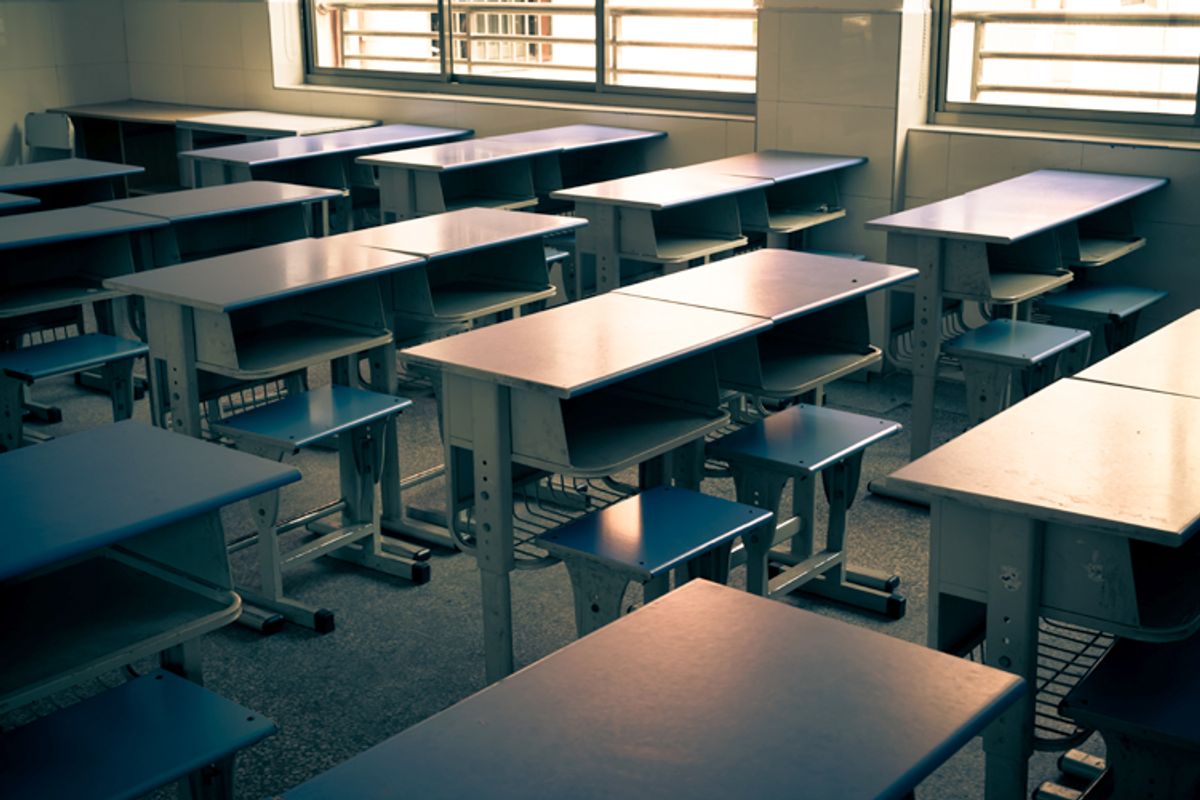 A week before Christmas my children’s school called. An automated voice said police were sweeping the Kirkwood High School campus. There had been a report of shots fired. If my children had not left home yet, they were to stay there. If they were en route, they were told to turn back.

My kids were on the brink of departure. Backpack slung over her shoulder, my daughter came into the kitchen. Hearing our conversation, my younger son emerged from the basement. The three of us stood in a circle and blinked.

We sat in the living room. The lights from the Christmas tree blinked, colorful tips marking the seconds as the wait dragged on. My son worried about a friend who had gone in early for a makeup test. My daughter browsed the Internet, refreshing the feed for our local news station. Putting on a show of calm, I pretended to grade papers.

To react strongly to the morning’s phone call, I reasoned, would only exacerbate their stress. Academic and social pressures in high school are real, especially as a student adjusts to a new city. Our family had relocated to Kirkwood, Mo., a suburb of St. Louis, just before the start of the fall semester. The last thing they needed was more uncertainty.

Not wanting to dismiss their worries, I sat nearby listening to what they said. My daughter talked about the policies at Kirkwood High School. “If there’s even the slightest possibility of danger, administrators call for a lockdown,” she said. “It’s probably a false alarm.”

My son agreed, “The rational response is to assume it’s a precaution.”

Kirkwood High School has seven buildings and nearly 70 doors. A college-style campus with 47 acres, it took police over an hour to clear. Another call arrived: No gunman had been found. Students should leave for school. Parents could expect an explanatory email shortly. I hugged them goodbye and sat at the computer, researching the price of bulletproof backpacks ($250 plus). When the email arrived, it said a shot-like sound had been made by a box of helium bulbs falling from a shelf in the chemistry lab.

When my daughter returned home she said one of her teachers had exited the gym to find herself surrounded by a SWAT team. Guns pointed at her chest, she was treated as a suspect before establishing herself as a teacher. “She’s lucky she didn’t get shot by mistake,” we said.

In 2012, 10 school shootings took place in the United States. The following January, eight more came in quick succession. With gun-control reform stalled in Congress, schools are increasing security. The result is tension. An entire generation of children submitted to warning systems like their great-grandparents during the Cold War. What the boogeyman was for these kids as toddlers, the school lockdown is for them now.

Counting only actual lockdowns, I’ve received three automated messages in two months. The first scare happened a few days before Thanksgiving. An anonymous caller phoned Yale security to report a gunman on campus. Our older son, who attends school there, had just landed at Lambert St. Louis Airport for his holiday visit home. He texted his international friends, who had stayed on campus, to see if they were OK. Barricaded in their dorm rooms, they said they were taking the warning seriously without getting too freaked out.

The second was the light-bulb incident. The third was actually precipitated by a local news station, KSDK St. Louis.

Apparently, the NBC affiliate had decided to conduct an investigation on school safety and sent an undercover reporter with a hidden camera to Kirkwood High, as well as four area elementary schools (KSDK has not responded to Salon's request for comment). The elementary schools, housed in traditional buildings with fewer doors, had their entrances locked.

Not so at Kirkwood High, where the reporter’s investigation wreaked havoc. He entered the front of the building, passed several open classrooms on his way to the office, and signed in as a visitor. He left his name and phone number and asked to speak with security. When staff members told him he needed an appointment, he asked for a bathroom and was observed walking toward it before quickly turning down a hallway in the wrong direction.

The school soon placed an emergency call to parents that a suspicious man was roaming the high school. As a precaution, students would be locked and/or barricaded in their rooms.

The investigation was a victory for KSDK. The reporter had exposed Kirkwood High School’s vulnerability. Picking my children up during the day, I’d noticed open doors, students walking outside to go from one class to another. I’d been tempted to drive into the front parking lot and enter the front door, just as the reporter did. But security guards were always watching, the doors and the students, and signs posted on the barricades at the front parking lot instructed visitors to drive around back and use the rear entrance.

Obviously, a gunman desiring to hurt people would not obey security directives and I have to thank the reporter for exposing flaws in Kirkwood’s system. It turns out the security guards have been taking lunch together all year, thereby creating a reliable gap of unguarded time for intruders to enter.

Yet I also feel upset with KSDK’s investigation, because after the reporter went the wrong way to the restroom, he refused to answer his cellphone. School administrators rang him repeatedly. They listened to his voice mail, which identified him as a reporter for the local NBC news affiliate. Seeking to confirm his employment with KSDK, they called the station but were denied information. Administrators warned the news station that they were about to put the school on lockdown, thereby scaring hundreds of parents and students, yet the news station still refused to confirm their employee’s presence on campus.

Thus our children sat in lockdown, some fearfully texting parents, others making jokes. It took district officials 40 minutes to confirm that the episode was a false alarm. In the meantime, police carrying high-caliber rifles searched the school’s hallways, wasting taxpayer dollars again.

In a St. Louis Post-Dispatch story the following day, students are quoted as saying: “My teacher told our class that he would step in front of the person and let us all leave.” And: “We were scared that something was going to happen to us, like at Sandy Hook.”

Far from addressing the stress our children face as shootings increase, leaders in our community have forced them into roles as guinea pigs. Rather than address the violence as a nation, we turn the page and move on. As this story begins to fade in the St. Louis area, I ask myself how many other news stations will breach their code of ethics to create a similar story in the future. How did KSDK decide on what schools to enter for their safety investigation? Did they look far enough ahead in their planning to realize that there might be a lockdown? Would it not have been better if they called to tell Kirkwood High administrators about their investigation immediately after the reporter got his footage and knew he had exposed flaws in the system?

These seem to be basic questions, yet KSDK did not seem to ask them prior to its actions at our school. I’m concerned, not only as a parent, but as a citizen, that we care so little about holding the station accountable. What happens when a reporter’s tactics become the news rather than the social ill he is purportedly covering?

Aside from issues of reporting ethics, community responses and the mental stress our children are experiencing (whether that stress induces ulcers or a Boy Who Cried Wolf cynicism), lockdowns bring in guns and guns result in accidental shootings. False alarms, whether they are caused by criminal hoaxes or media investigations, are identical in this way. They increase the chance that a shooting might occur. What if someone, mistaken for the perpetrator, had been shot in KSDK’s media investigation?

I’ve asked my two children to describe what happened several times now: how they felt, what they saw. My son shrugs, “The kids who were texting their mothers were teased. Everyone figured they were overreacting.”

My daughter, who works as a reporter for the school newspaper, informs me that the school district is now talking about putting in card-swipe entrances at a price of $17,000 per door. She think it’s ridiculous. She says the money should be spent to improve education and that school shootings are a gun control problem rather than a security problem. She says she doesn’t want to feel locked up in high-security buildings and she is unforgiving about the recent lockdown.

“Why would a news station publicize how easy it is to commit a crime at our school? Doesn’t it seem ironic?”

It is ironic. To protect our children, we make them more aware of the potential for violence. Yet as their awareness increases they grow anxious, less emotionally stable, and more prone to outbursts of anger themselves. Grown-ups grow anxious as well, and after each school shooting people purchase more guns. In the time it took to write this essay, a fatal shooting occurred at Purdue University. Next week it will be the same story in a different location. As a nation, we argue for and against gun reform, yet we rarely discuss the root of the violence. What conversations in America are being silenced that such frustrations emerge so often? Our identity as a democratic nation seems to prevent us from admitting we are a psychologically disturbed community raising stressed-out kids.

I am pleased my daughter has become invested in the gun debate. I am pleased my son can throw his worries aside. I believe their responses are age-appropriate. I want my children to grow into confident rather than cowering adults, and I hope their hair stands on end if, God forbid, they are ever in the midst of real danger. But how long can I hide behind an illusion of safety? I’ve never been an activist and I admit that part of me wants to forget these three lockdowns and behave as if school shootings can only happen in other communities. Why? Because I want to believe Kirkwood is safe. I want to think we’ve come to live in a picturesque and ideal place, the first American suburb built west of the Mississippi.

“In the good old days,” I hear people say with nostalgia, tying their longing for safety to memories of a less violent past. But isn’t this part of the illusion and problem itself? The notion that America ever had a less violent past? Maybe our collective boogeyman rests in our own amnesia — our ignored, unspoken and festering histories — and thus the scourge of school violence is just another chapter in our refusal to hear one another speak.

Deborah Taffa's work has appeared in Prairie Schooner, Drunken Boat, Best American Travel Writing, and beyond. A professor of creative writing in St. Louis, MO, she is finishing a collection of stories titled "Almost Yuman," a bildungsroman about her childhood on the reservation. She lives with her husband, children, dog, hermit crabs, and Venus flytrap in a house with too many Girl Scout cookies. Follow her on twitter @deborahtaffa.