Was my breast reduction a mistake?

It seemed like the only way to find peace in my body. In a new era of curvy acceptance, I wonder: Was I right? 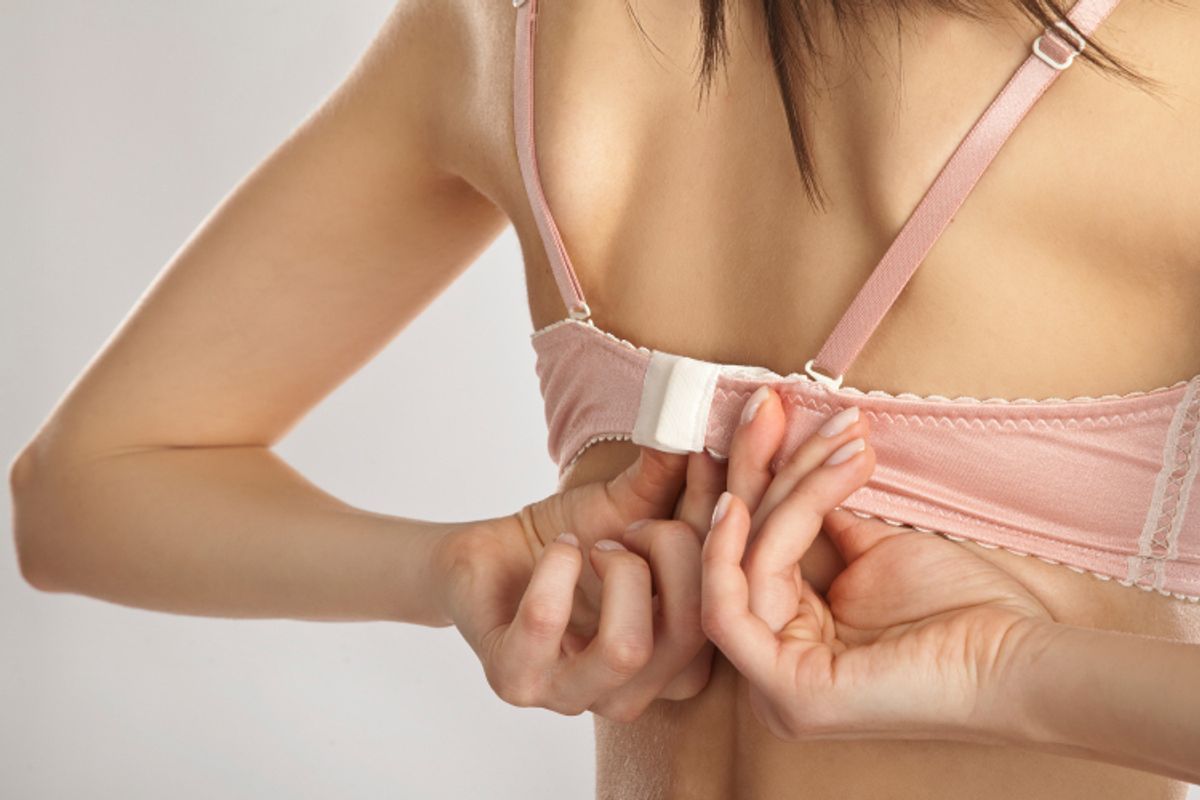 “Your breasts are very large,” the doctor said.

I was 23, halfway through my annual exam, and it took me a good half-minute to respond. I wasn’t offended, exactly. I liked my gynecologist. A man in his late 60s, he was attentive, pleasant, always willing to answer questions. Now, he was examining my double-D-size breasts and saying what I’d known since I was 12 but had never heard stated so matter-of-factly.

“Have you ever thought about a reduction surgery?”

Sure, I thought. Every time I tried to wear a button-down shirt or go for a run or lie on my stomach. But I didn’t think I could actually go through with it. It was major surgery, after all. And permanent. And besides, I didn’t always hate my chest. There were some advantages. They certainly drew attention, not all of it unpleasant. When I finally got around to losing 20 pounds, they’d get smaller, wouldn’t they? And what about breast-feeding if I had kids? And what about the scars? And what about sex? I was still engrossed in this conversation with myself when the doctor handed me a card of a friend of his who ran the university’s main plastic surgery practice. “Feel free to give him a call.”

A few weeks later, I was in the surgeon’s office discussing back pain, and a few months after that, I opened my eyes in the hospital’s recovery room. My breasts, now reduced in half, were bound and bleeding, a throbbing, sutured wound wrapped with gauze. But even beneath the pain and fading anesthesia and tightly fitted surgical bra, I could feel the difference. They felt so small, so light, so ... normal. They were the perky, bouncy, non-pendulous appendages I’d always dreamed of. I was certain I’d made the right decision. At least, I was certain at the time.

I was 10 when my breasts first appeared, and I was already painfully conscious of my weight. I wasn’t fat, but I wasn’t thin, and when I began to develop, it felt like the universe was adding insult to injury. By the age of 12 I was a big, tall, voluptuous woman, though of course, I wasn’t a woman. I was 12! And as my breasts emerged, I don’t think my adolescent self could incorporate the idea that there was now a part of me, an extremely prominent part, that had no clear function, that would serve no purpose in the foreseeable future, that resembled and yet was distinct from the other parts of my body that I was always wishing and hoping would become slimmer and smaller.

I remember one afternoon, walking home from seventh grade along a bike path and realizing as I came around a curve that I was being followed. I looked up to the top of an embankment to a footbridge where a group of older boys stood above, laughing and jeering. As I turned my back, I heard one of them call out to another, “I can’t tell if it’s big tits or if she’s just fat?”

Ashamed, I never told anyone about the incident, but I did go on to ask myself the same question at least a thousand times over the next five years. A friend of mine who also had a reduction surgery described a similar experience, how she began to hate her triple-D chest at an early age, slouching and doing anything she could to hide them, because every day as she walked through the high school cafeteria, the football players would yell “boobs” as she passed. And another friend says, “Getting big boobs at the age of 9 completely warped me. It felt like my body was out of my control, werewolf-style.” She notes how “secondary sexual characteristics are very cruel in the sense that they make these tender body changes so public.”

For me, though, my breasts were not only a source of embarrassment and discomfort, they were also a problem that needed to be solved. And surgery was the solution.

I spent one night in the hospital, then returned to the apartment I shared with my soon-to-be husband, where I recovered quickly. None of the risks I’d been warned of — infection, bleeding, discoloration — came to pass. The pain was manageable. The decrease in sensation didn’t bother me much. And the scarring, while visible, wasn’t as prominent as I’d worried it would be. During my follow-up appointment, the plastic surgeon joked that I’d still be able to do topless dancing if the impulse ever struck me. And a month after the surgery, I began what I now think of as my honeymoon phase.

I went into Victoria’s Secret and bought a lacy little underwire number in my new size, 36 C, of which there were so, so, so many items in stock. I wore tank tops and camisoles around town, the kinds of shirts that before might have gotten me arrested. I went jogging with a single sports bra instead of my usual trio. At night, in the bathtub, I lay for an hour, watching them float, feeling their lightness, experiencing what I can only describe as an almost religious elation at my new form, at these things that were now a part of me, these delicate, dainty, light-as-feathers breasts.

For the next several years, I relished the change. I was able to nurse, though not well or easily, not without near-constant pumping to keep up my milk supply. I was able to find clothes that fit and to exercise, and to wear a bathing suit that looked like a bathing suit. I even became a sort of breast-reduction proselytizer to any big-chested friend I made. Often, they confessed to having considered the surgery themselves, and my usual response was unequivocal: “Do it,” I told them. “I can’t recommend it highly enough.”

But then, as I entered my 30s, something strange happened. The large-chested women I knew -- women who in their 20s might have been as ready as I was to declare that they hated their breasts -- weren’t hating them anymore. They were flaunting them, and reading fashion blogs like GabiFresh and girlwithcurves, sites where young, plus-size women posted gorgeous pictures of themselves with articles about how to dress fashionably at larger sizes. They were watching Christina Hendricks kick ass in emerald, body-hugging dresses and pencils skirts, or delighting as plus-size models made their way onto magazine covers and runways. Everywhere I looked, there seemed to be a new generation of women who were willing not just to accept themselves at larger sizes, but to celebrate a more womanly shape. Out with Carrie Bradshaw, in with Lena Dunham. And now, I felt strangely left out, just as I had as a double-D during the diet-crazed, thin-at-all-cost culture of the '80s and '90s.

I found myself wondering if I still would have had the surgery if these types of role models had been around then, these soft and curvy women who seemed simultaneously powerful, smart and intensely sexy.

One of the hardest parts of developing large breasts at an early age is that it invariably garners sexual attention, attention that might be welcomed or tolerated or seen as a mild nuisance to a woman of 25 or 30, but can be deeply unsettling to a girl of 12. I began to wonder if there was a part of me at 25 (when I had the surgery) that had never completely gotten over the ickiness and inner turmoil of having a sexualized self on display before I was psychologically ready. And if this was the case, was the surgery, at least in some small part, a way to de-sex myself, to “fix” something not because it was broken but because I was young and had bought into societal assumptions that big breasts are for bimbos while nice, smart, serious girls don’t sport cleavage?

A friend of mine who considered but chose not to have the surgery tells me how she “knew a lot of girls who got it, and the surgeons always said it was for medical reasons. (Big breasts were bad for your back.) There was something ‘noble’ and ‘healthy’ about reduction -- whereas ‘boob jobs,’ i.e., inflating your rack, were seen as vain and shallow in our academic circle.”

But now, when I look at my breasts or the scars beneath them, when I think back to the difficulty and frustration I experienced trying to breast-feed with them, or consider the way that, despite their smaller size, they’re still flattening out and drooping as all non-saline enhanced breasts eventually do, I wonder if my surgery was really any “nobler” or “healthier” than another woman’s implants, or if I was simply trying to conform to conventional beauty standards, no different from the girl who gets the bump smashed out of her nose or the curl fried out of her hair.

I don’t regret the surgery, exactly. Smaller breasts are more comfortable. But I suppose there’s a part of me that wants to see if the 35-year-old woman I am now could pull off what the 24-year-old girl couldn’t: accepting my body as is, maybe even seeing my “huge” breasts as kind of awesome, and not giving a crap about anyone who thought otherwise.

When I try to remember what it was like to have a large chest at 16, 20, 23, I invariably remember a feeling of embarrassment. I might have disliked other aspects of my appearance, but I was embarrassed by my breasts. And it wasn’t just that that they were uncomfortable. They made other people uncomfortable. I think this must be what my friend means when she describes others viewing a reduction as the “sane” choice.

But in hindsight, I can’t help but thinking, screw them.

What was so wrong, anyway, with a body that was big and full and feminine and curvy, a body in which I felt uncomfortable, at times, yes, but also sexy, and unique, and like myself?

I look at old pictures sometimes and hardly recognize the busty girl in them. I remember old dresses that hugged my curves, past lovers’ expressions of admiration, the sense that my body, disproportional and top-heavy as it might be, was uniquely, and irrevocably, my own.

I remember an acting teacher in college who tried to help me overcome my physical awkwardness onstage by urging me to wear long, swishy skirts, form-fitting dresses, more feminine clothes instead of my usual jeans and baggy sweater. One day, in a private conference, she said, “I think it’s time you made peace with your body. It’s a womanly body,” she told me. “And it is what it is. You can’t make it into something else.”