We must give the land back: America's brutality toward Native Americans continues today

Americans have unjustly taken vast tracts of land. This Presidents' Day, let's uphold our treaties and return it 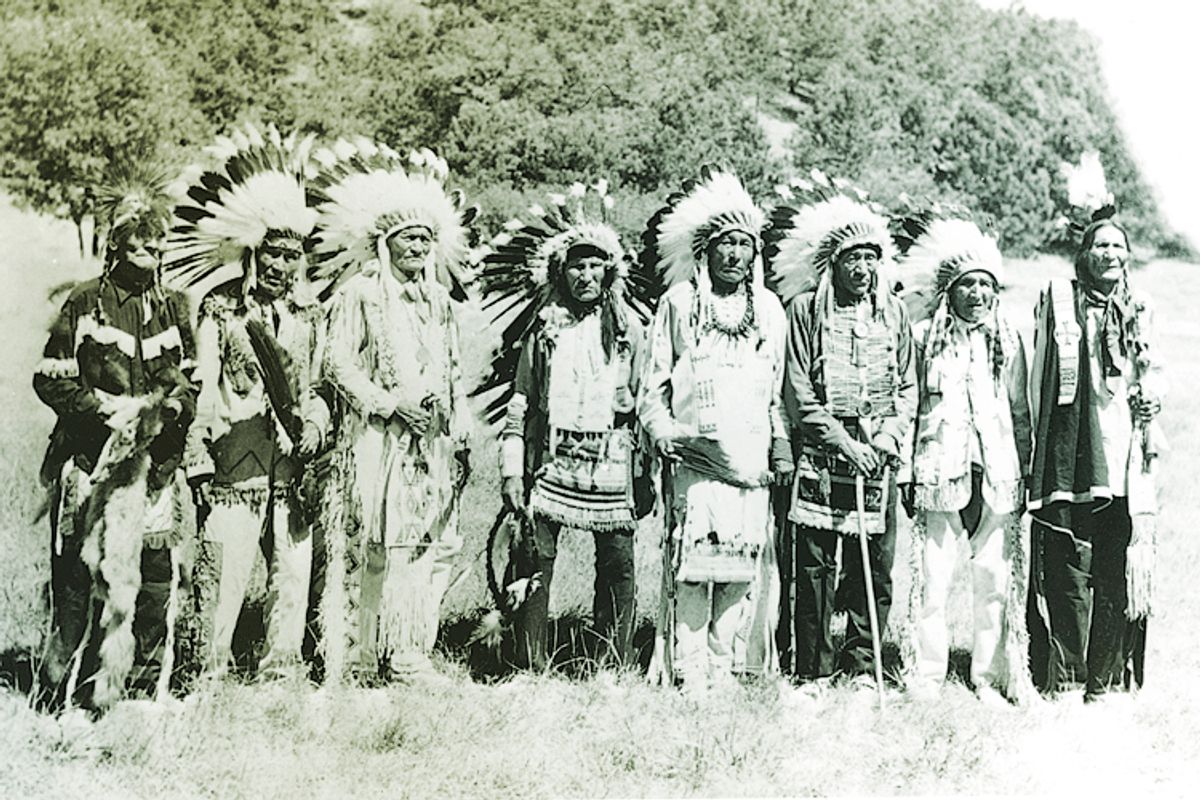 Sioux Indians, six of whom were present at the Battle of Little Big Horn, gather in Custer State Park in the Black Hills area of Custer, S.D. on Sept. 2, 1948. (AP)
--

I write often about liberating Palestine from Israeli occupation, a habit that evokes passionate response. I have yet to encounter a response that persuades me to abandon the commitment to Palestinian liberation.

I have, however, encountered responses that I consider worthy of close assessment, particularly those that transport questions of colonization to the North American continent. You see, there is a particular defense of Zionism that precedes the existence of Israel by hundreds of years.

Here is a rough sketch of that defense: Allowing a Palestinian right of return or redressing the ethnic cleansing of Palestinians in 1947-49 is ludicrous. Look what happened to the Native Americans. Is the United States supposed to return the country to them?

Israeli historian Benny Morris puts it this way: “Even the great American democracy couldn’t come to be without the forced extinction of Native Americans. There are times the overall, final good justifies terrible, cruel deeds.”

This reasoning suggests a finality to the past, an affirmation of tragedy trapped in the immutability of linear time. Its logic is terribly cliché, a peculiar form of common sense always taken up, everywhere, by the beneficiaries of colonial power.

The problems with invoking Native American genocide to rationalize Palestinian dispossession are legion. The most noteworthy problem speaks to the unresolved detritus of American history: Natives aren’t objects of the past; they are living communities whose numbers are growing.

It’s rarely a good idea to ask rhetorical questions that have literal answers. Yes, the United States absolutely should return stolen land to the Indians. That’s precisely what its treaty obligations require it to do.

The United States is a settler nation, but its history hasn’t been settled. Yet most people invoke Natives as if they lost a contest that entrapped them in the past — and this only if Natives are considered at all. As a result, most analyses of both domestic and foreign policies are inadequate, lacking a necessary context of continued colonization and resistance.

For Natives, political aspirations aren’t focused on accessing the mythologies of a multicultural America, but on the practices of sovereignty and self-determination, consecrated in treaty agreements (and, of course, in their actual histories). Treaties aren’t guidelines or suggestions; they are nation-to-nation agreements whose stipulations exist in perpetuity. That the federal government still ignores so many of those agreements indicates that colonization is not simply an American memory.

One of the most famous violations is the Treaty of Fort Laramie (1851, 1868), which guaranteed the Lakota possession of the Black Hills. The American government seized the Black Hills nine years after signing the treaty, in 1877, having discovered sizable deposits of gold and other precious minerals.

In 1980, the U.S. Supreme Court ruled that the federal government had unjustly appropriated the Black Hills (the ruling doesn’t use the word “stolen,” but it’s an accurate descriptor of what occurred). The Court awarded the Lakota $15.5 million (now well over $100 million with inflation) for the adjusted value of the appropriated land, but the tribe has consistently refused the monetary settlement, preferring instead to retain entitlement to its historic territory.

To clarify: Vast portions of five U.S. states — North Dakota, South Dakota, Nebraska, Wyoming and Montana — are Indian land according to a treaty to which the American government voluntarily assented. The highest legal authority in the United States has acknowledged that a significant portion of the land in question is rightfully Lakota. The American government refuses to return that land.

Let’s therefore drop the quaint notion that the colonization of Natives is a tragedy limited to the days of yore.

A comparable example of continuing U.S. colonization (unfortunately, this could go on a while) exists in Hawaii, the youngest American state. Hawaii became an American possession in 1893 due to a coup d’état led by colonist Sanford Dole, cousin of James Dole, who, not so coincidentally, made a fortune growing produce on the islands.

President Grover Cleveland commissioned an investigation into the overthrow of the Hawaiian monarchy, led by Georgia congressman James Henderson Blount. The Blount Report condemned the annexation of Hawaii. The condemnation ultimately did no good. American businessmen and politicians saw too much value in the new property to constrain their avarice. To this day, the Kanaka Maoli (Native Hawaiians) do not recognize the legitimacy of the annexation and consider themselves subjects of foreign rule.

(For an excellent analysis of these matters, please read J. Kēhaulani Kauanui’s "Hawaiian Blood: Colonialism and the Politics of Sovereignty and Indigeneity.")

While American tourists enjoy hula dances and Mai Tais on stolen land, the Kanaka Maoli, victims of a conquest that in no way has passed, continue to organize for liberation.

Colonialism is present across North America in less obvious ways, though the lack of obviousness doesn’t mitigate its relevance.

Corporate malfeasance is especially harmful to indigenous communities in the Americas (and across the world). Native nations have dealt with an uninterrupted expropriation of resources for over a century and now experience an inordinate amount of disease and pollution. At present, Natives and their allies in both Canada and the U.S. are working to stop the Keystone XL Pipeline, a project that portends environmental damage and serious health concerns.

Natives have encountered violence in attempting to exercise their hunting and fishing rights. (Does the phrase “save a fish, spear an Indian” ring a bell?) Police brutality is acute in Indian Country. Natives, women especially, are murdered at an epidemic rate, with the majority of cases unresolved. And many communities are still waiting on various institutions to comply with federal legislation requiring the return of artifacts and human remains to their rightful owners.

Nor should we forget that the forced sterilization of Native women and the kidnapping of children to be educated (read: brutally assimilated) in government boarding schools, where many were sexually molested and subject to countless other abuses, were still happening within the past half-century.

The inveterate omission of these realities in analyses of American politics constitutes an erasure of indigenous histories and illuminates why it is so easy to conceptualize the United States as historically settled. If we recall the existence of dynamic Indian nations, though, we have no choice but to rethink the commonplaces of American virtue.

It is a foolish conceit to suggest that history has ended in the United States. No amount of ignorance (willful or unwitting) will invalidate the vigorous efforts to decolonize the North and South American continents.

When Israel’s apologists invoke the dispossession of living communities on those continents as a rationale for colonizing Palestine, they betray a profound disdain of indigenous humanity, the sort of contempt that renders the oppressor’s psyche so unsettled.