The new "Tonight" host has made Mike Tyson a big part of his first two weeks. It's a familiar, dispiriting sight 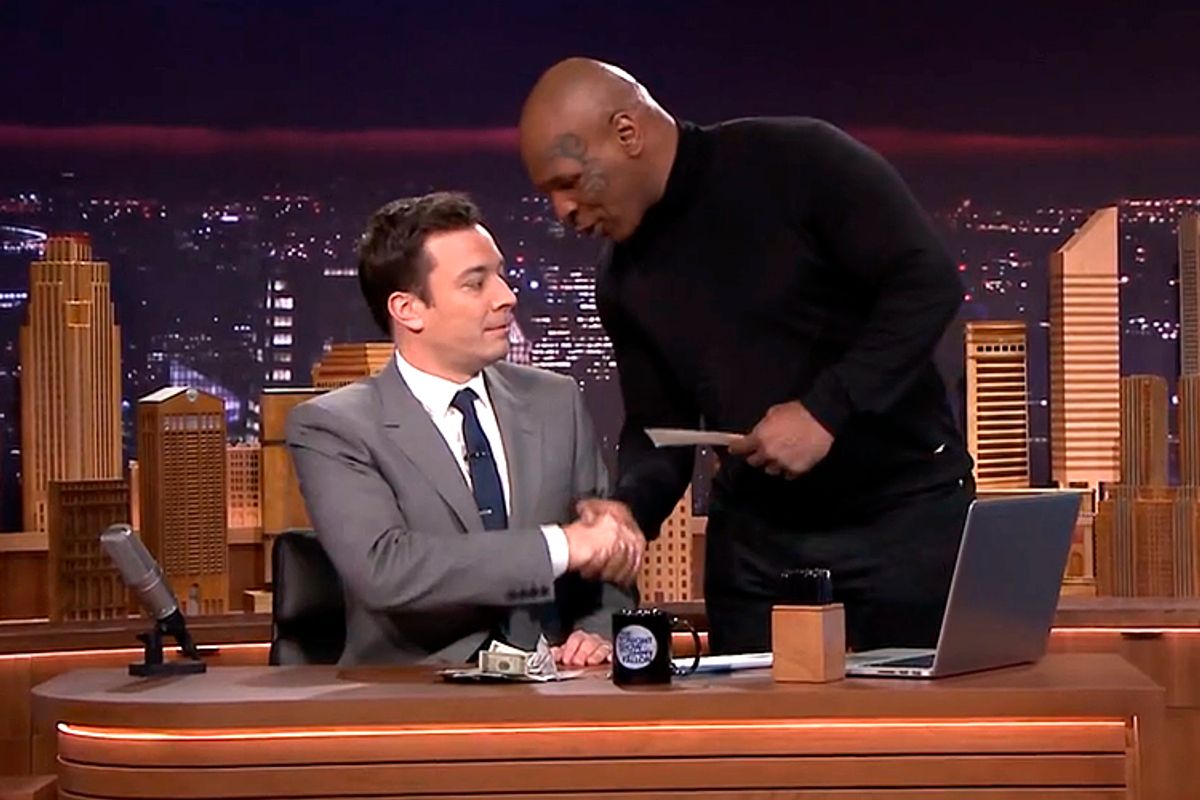 Last night saw a cavalcade of stars welcoming talk show host Jimmy Fallon to his new berth at the "Tonight Show," including Kim Kardashian, Sarah Jessica Parker, Joan Rivers -- and Mike Tyson, the former boxer. Though Fallon's act has always been about inclusiveness and allowing everyone to have fun, his inclusion of Tyson in his opening comedy bit, and his booking of Tyson as a guest next week, are disappointing signs.

Mike Tyson, who served out a prison sentence for rape in the 1990s, is entitled to make a living. But his existence as the perpetual object of the joke isn't good for him or for the nation. Tyson, whose 2013 memoir (written with a ghostwriter) thoughtfully dealt with his lifetime of substance abuse all while vindictively mocking an ex-wife whose alleged abuse is not funny. And yet he keeps getting put into situations where his presence is the joke itself, from "The Hangover" movies to the opening of the Tony Awards to Fallon's show. Tyson, a man with a personal history at once deeply sad and wrenchingly unsympathetic, shouldn't be in this situation, but he is! Ho, ho. There's an uncomfortable element to the laughter, the sense that all we're laughing at is a black man neutered.

Fallon's intention in booking Tyson for two appearances on his new "Tonight" may not be to position the pugilist as a figure of fun -- but what, exactly, are the two going to talk about? There's little in Tyson's memoir that's funny at all; indeed, the whole thing is suffused with the threat that, at any moment, Tyson could relapse, as he discussed in a press conference this summer during which he said, "I'm trying to kill myself."

Tyson is a historically and semiotically significant figure and one who deserves to be covered by the serious-minded media; I'd love to see a "60 Minutes" segment, for instance, that dealt in a rigorous way both with his substance abuse and his treatment of women. But the former is likely to be minimized and the latter not touched at all in an interview on a comedy show, a disservice to both Tyson and the audience.

Fallon is not late night's strongest interviewer, and it's difficult to imagine him going to any tough places with Tyson; in an interview with Tyson on "Late Night," Fallon's previous show, the host toothlessly just kept repeating how nice Tyson was. If Fallon leaves out the specter of drug abuse that haunts Tyson, he'll be showing a very limited picture of a complicated figure who has been trying, in his book and press conference, to tell the public about the struggle he's undergoing. If Fallon leaves out the boxer's rape conviction or the allegations against Tyson made by Robin Givens, he'll be doing precisely the same thing that actors who appear in Woody Allen films have lately been pilloried for, ignoring alleged misdeeds to honor a popular figure.

But Tyson's popularity stems entirely from a profitable but demeaning public image as the ever-game fellow able to smile and say the lines and physically occupy exactly the space he does. It's enabled him to make money and move past the controversies and misdeeds of his past a little too easily, merging the ease with which Americans are able to forget alleged crimes against women by popular figures and the desire to laugh at minorities.

Fallon's "Tonight" is inclusive, sure. But by extending two invitations to Tyson, it's disincluding those who take Tyson's struggles and his misdeeds with any level of gravity.