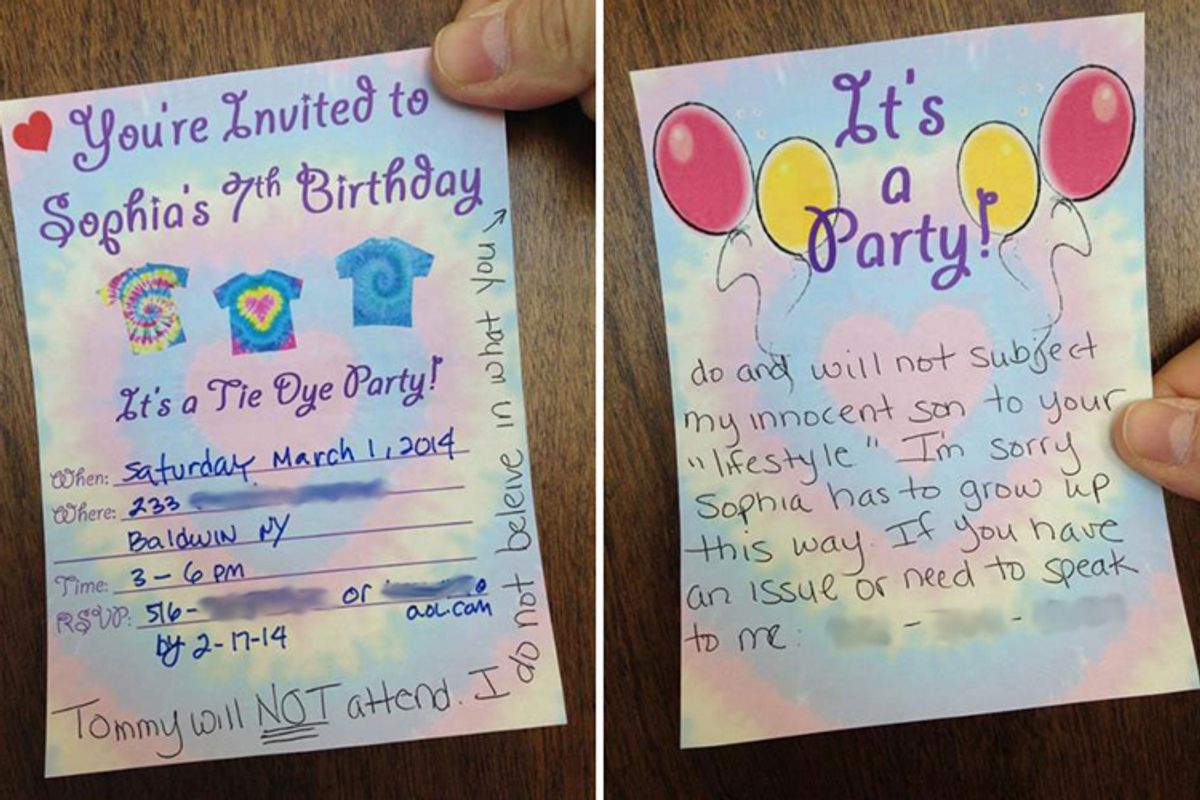 Did you hear the one about the terrible homophobic parents who wouldn't let their child go to a gay family's party? Well, here's another one. It's about how Long Island DJs Steve Harper and Leanna Karlson have issued a public apology -- and been suspended from their morning gig at K98.3 FM.

Even if you don't know the names Harper and Karlson, you're probably familiar with the story they spun earlier this month. As the DJs first detailed earlier this month – and outlets like the Advocate reported on -- an invitation to a little girl's 7th birthday party was met with a gruesome response. The photograph the station posted on its Facebook page showed the sorry reply: "Tommy will NOT attend," a local mom wrote to Sophia's two fathers. "I do not believe in what you do and will not subject my innocent son to your 'lifestyle.' I’m sorry Sophia has to grow up this way. If you have an issue or need to speak to me." The photo even included Tommy's mom Beth's phone number, and a message that she "gave us permission to post her phone number and said anyone who has a problem with what she wrote can call her, too!" But the number is a nonworking one. And there is no Tommy. No Beth. No Sophia. No two dads in Baldwin, N.Y.

In a new message from the station with the music that "makes you feel good," management now admits that "The story, presented as a real event, was, in fact, fictitious" and that "In an effort to move forward, K-98.3 has been speaking with local community organizations, such as the Long Island GLBT Services Network, to ensure the fabricated story does not result in further damages with respect to the GLBT community." The DJs, meanwhile, have explained that "We were attempting to spur healthy discourse on a highly passionate topic but we made a mistake." The "healthy discourse" included asking on Facebook, "Do you think she was right to write this? Would a simple phone call RSVP'ing 'no' been better?"

Here's a programming suggestion. There's really no "healthy discourse" to be had around the question of, "Is it okay to be a jackass to a child with a gay parents?" Seriously. That's not an actual debate to have. You want to have a "discourse"? Here it is. Homophobia is wrong. Ta da!

And you know what else is wrong? Creating pretend homophobia in a world where we're not exactly running out of real homophobia. Making stuff up. And the K98.3 DJs aren't alone among those who seem to have fabricated encounters with imaginary stupid people to attract attention. Last fall, New Jersey waitress Dayna Morales said she'd been the recipient of a similar note from a patron, who wrote, "I’m sorry but I cannot tip because I don’t agree with your lifestyle & how you live your life." But a few days later the family who'd paid the bill in question came forward to say they'd never written any such note, and Morales soon parted ways with her employer. In December, Andrea Brazier, the Massachusetts mother of a former high school football player, reported racist graffiti on her home -- and the team's season was canceled. Soon after, though, Brazier emerged as the prime suspect. The local DA declared in January there was insufficient evidence "a crime has been committed by a particular person." Let's not even get started on that whole population of dedicated cancer fakers.

And then there are the apparent radio stunts. In 2012, North Dakota station Y94's "Morning Playhouse" went viral with an authentic-sounding call from a concerned woman named Donna, who wanted a local deer crossing moved to a less traffic-dense area. A year later, a woman named Cheryl -- with a voice very similar to Donna's -- called in to say she'd be handing out fat shaming letters to obese trick or treaters.

Not all hoaxes are created equal, and an individual's peculiar cry for attention isn't the same as the staffers of a radio station making up news in some sad attempt to go viral. But the desperation of Harper and Karlson to create a stunt, to do something exciting, carries with it a whole raft of similarly sheer juvenile brattiness. It takes a special kind of arrogance to just make up garbage to get an emotional reaction, whether you're James Frey or two morning radio clowns from Long Island. Imagine them, having a conversation in which they decided to make up a mean mom bullying a gay family – and then writing a fake note and talk about it like it was real. Picture carrying out that whole act. Wow. That's not how you promote discourse. But I guess you can use it to foster consensus – because you'd be hard-pressed to find anyone who isn't appalled at their brazen idiocy now.