Martin Scorsese: "You can't make pictures to be liked" 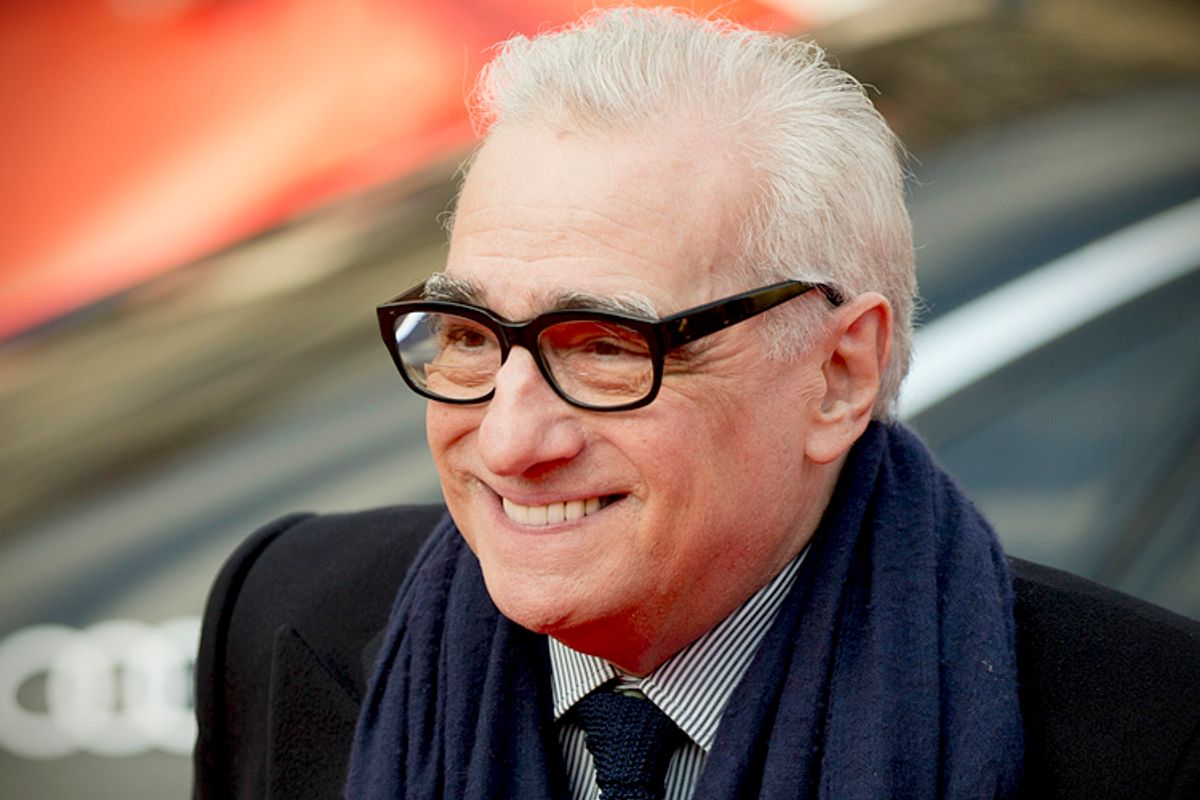 Martin Scorsese has barely slowed his pace as a filmmaker in the latter portion of his career, if indeed it has slowed at all. Counting his music documentaries and the pilot episode of “Boardwalk Empire,” Scorsese has made 11 films since 2000, with several more in various stages of preparation: A Bill Clinton documentary for HBO, an adaptation of Japanese novelist Shusako Endo’s “Silence,” a reunion with Robert De Niro and Al Pacino for a crime drama called “The Irishman.” And whatever you may think of Scorsese’s “The Wolf of Wall Street,” it does not feel like the work of a man in his 70s who's content to rest on his laurels.

But for some time now Scorsese has evidently not just begun thinking about his own legacy but the larger legacy of cinema. More than 20 years ago, he founded the Film Foundation, a nonprofit that has helped restore and preserve more than 500 rare or forgotten films that might otherwise have been lost. That in turn led to the global efforts of the World Cinema Foundation, also co-founded by Scorsese, which has worked to restore endangered masterpieces from all over the world, ranging from Ousmane Sembène’s 1963 “Borom Sarret” (probably the first feature film made by a black African) to a film made in pre-war Hungary by André de Toth, who would go on to direct the 3-D exploitation classic “House of Wax.”

As that suggests, Scorsese has always been a voracious cinephile who draws little distinction between high art and popular entertainment, a range reflected in the almost mind-boggling riches of “Masterpieces of Polish Cinema,” a series of 21 newly restored films from the 1950s to the 1980s, personally selected by Scorsese. Although Scorsese has no personal or family connections to Poland, he had long been fascinated by its rich, diverse and visionary tradition of national cinema, one that nearly matches France or Italy in the European context but that remains nearly unknown to American viewers (beyond, perhaps, the brief art-house moment of Krzysztof Kieślowski’s “Three Colors” series in the 1990s.)

When Scorsese received an honorary doctorate from the national film school in Łódź a few years ago, he began discussing with Polish officials how the Film Foundation could help with the digital restoration of the classic works of Polish cinema from the Communist years. That led in turn to this retrospective, which stretches from internationally famous works like Andrzej Wajda’s Oscar-nominated “Man of Iron” (1981), the story of the Gdansk shipyard strike and the birth of the Solidarity movement, to the historical epics “Black Cross” and “Pharaoh” (yes, a film in Polish, set in ancient Egypt!), to Jerzy Kawalerowicz’s 1960 metaphysical thriller “Mother Joan of the Angels,” two early Kieślowski films, and Wojciech Has’ three-hour freakout “The Saragossa Manuscript,” which … well, I’ll let Scorsese tell you about that one.

I was bursting with questions to ask Scorsese about Polish cinema (and about “Wolf of Wall Street”) and emailed him just before the series launched at New York’s Lincoln Center a couple of weeks ago. I was warned I might not hear back, soon or ever. There were future projects to plan, visiting Polish directors to meet-and-greet and — although he probably wouldn’t put it this way — an Oscar campaign to manage for his friend and collaborator Leonardo DiCaprio, who deserves the best-actor prize for “Wolf of Wall Street” but probably won’t get it. (Scorsese, I would wager, is fully aware this movie has little chance of winning best picture or best director.) Just as I was giving up hope, and just as  “Masterpieces of Polish Cinema” was wrapping up its run in New York, I got my answers. But here's the good news: Scorsese's Polish series will soon launch a 30-city tour of North America over the next 18 months, with specific dates and venues still to be announced.

Can you remember your own personal introduction to Polish cinema? What movie was it, and what effect did it have on you?

Like many people in America, the picture that really introduced me to Polish cinema was “Ashes and Diamonds” (1958) by Andrzej Wajda. I didn’t know what to expect, and it left me speechless. It was passionate, despairing, romantic, cynical and cinematically stunning. It was quite an introduction! [A restored print of “Ashes and Diamonds” is included in the retrospective.]

Sometimes it seems artificial to speak of a national cinema having defining characteristics – but still, we can’t resist it! What strike you as the central characteristics of Polish film, either formally, thematically or both? To make the question impossibly broad, what can American viewers of 2014 find in Polish cinema now?

First of all, the level of craft is extremely high — you’re looking at a national cinema created by artists who have been trained to think visually in the film school at Łódź, or who have come to do so by other means. This isn’t true of all cinemas: Some cultures are more visually oriented than others. Then, there’s a certain sardonic quality, coupled with a profound love of freedom: That might seem like a contradiction, but it’s two artistic and moral impulses that seem like direct outgrowths of life during the Communist era.

As for the second part of your question, the answer is simple: inspiration, excitement, beauty, surprise, tenderness, horror … a living response to the world through images and sounds. It’s a precious cinema.

Probably the two greatest Polish directors, and the only two who are widely known in the West, are the late Krzysztof Kieślowski and the great Andrzej Wajda, who is still very much with us. At first glance, their work could hardly be more different: Kieślowski was a European intellectual, interested in the rhythms of private life, who left Poland for expatriate life in Paris; while Wajda has stayed in Poland and painted from recent history, on a broad social and historical canvas. How do you see the relationship between the two? Are they two sides of the Polish character, or is there a kinship that’s not evident on the surface?

I know Wajda a little — we’ve met a few times. I last saw him when I visited Poland two years ago — and Kieślowski I know through his films. I suppose you could say that Kieślowski’s pictures are a little more cerebral and meditative, Wajda’s more emotionally expressive from moment to moment. Two sides of the Polish character? I’m not so sure. It’s difficult to compare them because Kieślowski was so young when he died [in 1996, at age 54] and got to make so few pictures, while Wajda, who turns 88 in March, has made dozens, including a brand-new picture about Lech Wałęsa.

Are there any less known or “undiscovered” gems in this retrospective that are particular favorites? Anything you’d urge cinema buffs who admire your own work to check out?

Anyone who hasn’t seen “The Saragossa Manuscript” by Wojciech Has should definitely check it out. It’s a wild, hallucinatory experience. It had a real cult following back in the ‘60s and ‘70s — Jerry Garcia was a huge fan. You should also see “Pharaoh” by Jerzy Kawalerowicz, a historical epic set in ancient Egypt — three years in the making and a truly mesmerizing picture.

What relationship do you see between the situation Polish filmmakers faced under a Communist regime in the ‘60s and ‘70s and your own generation of American directors, who embraced a nonconformist, anti-establishment stance? Is it important for artists to rebel against authority or resist it? And — leading question! — has that been lost in our own era?

There’s no way to compare our situation with Wajda’s or Zanussi’s or Andrzej Munk’s, trying to live and get their pictures made under totalitarian rule with the Soviet Union right on their doorstep. We were able to make our choices in a free society; they weren’t. We never faced the possibilities of arrest or going into exile; they did. To answer the last part of your question, I think that every good picture, really all good art, defies authority. If P.T. Anderson or Richard Linklater took orders from higher authorities, they wouldn’t be making pictures like “The Master” or “Before Midnight.” The same goes for a really young guy like Benh Zeitlin and “Beasts of the Southern Wild.”

Lastly, to bring things back to right now: Is it invigorating or frustrating to hear people disagreeing so vociferously over the message and meaning of “The Wolf of Wall Street”? Yours has always been a cinema of “strong reactions,” which reminds me of several movies in this retrospective. You seem to want to galvanize a powerful emotional response, even if it may be a negative one. Why is this important?

This leads back to your last question. I’ve never made a picture just because I think it will provoke a strong response from the audience. I’ve made the pictures I’ve been drawn to make, and I’ve tried to translate my own reactions to the material into images and sounds, into an experience for the audience. In certain cases, the nature of the material will provoke controversy — it happened with “Taxi Driver,” with “The Last Temptation of Christ,” with “Goodfellas” and now with “The Wolf of Wall Street.” But in none of those cases was I making a movie just because I wanted to provoke a controversy — I was drawn to make the picture and then prepared myself for a possible controversy because of the subject matter. In this case, I was trying to deal as honestly as I could with people in the financial industry. We could have included a scene in which Jordan Belfort [DiCaprio’s character] suddenly realizes what he’s done and begs for forgiveness, but that would have been false: No one in the industry, from Jordan Belfort to anyone who was involved in the most recent financial meltdown, seems to be terribly sorry about what they did. On top of that, they all had a lot of fun along the way — in fact, you could say that having fun is the only thing they knew how to do. Does so much excess get exhausting? I guess so, but then there’s always more money to pay for more fun. So we made the picture as honestly as we could, and people are responding passionately. That’s always a good thing. You can’t make pictures in order to be liked by everybody — or rather, you can, but it doesn’t interest me. You make the ones you’re drawn to, the best way you know how. Once they’re released, they’re out of your hands.