American bobsledders end the day in first, a snowboarder bounces back from a coma, and more from Sochi 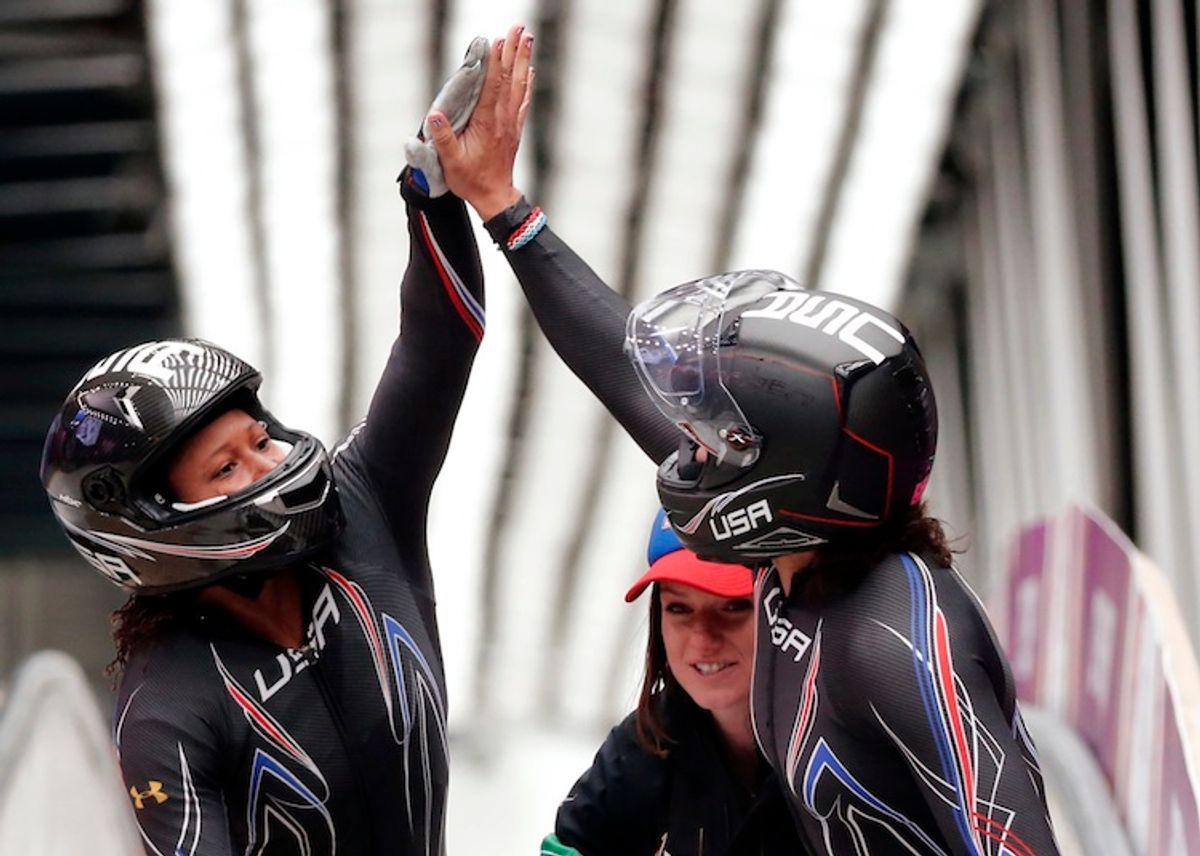 Let’s not mince words: Tuesday’s prime-time Olympics broadcast was dull, the TV-watching equivalent of getting drenched in a rain-snow mix while standing on the sidelines of an alpine skiing event. Hey, there’s a bright side. At least we home viewers were able to stay dry while we slogged through a night of events -- early runs in women’s bobsledding, men’s snowboard cross, women’s giant slalom and men’s halfpipe skiing -- that delivered only intermittently compelling moments.

This isn’t anyone’s fault. The athletes are there to compete, not put on a show for us. And NBC can only pick and choose what to air based on what happens in a given day. But it goes to show that even the Olympics -- which is supposed to be a dramatic, emotional depiction of the thrill of victory and the agony of defeat -- can have just an average, not hugely eventful day. (The Olympics: They’re just like us!)

It’s also proof that the games are always, always better when they involve hockey or figure-skating. But we knew this. Clearly NBC knows it, too. That’s why last night’s prime-time programmers included two previews of the women’s individual skating competition -- including one, happily, that involved skating commentators Tara Lipinski and Johnny Weir -- and a profile of defending gold medalist Yuna Kim in which Ryan Seacrest actually put on a pair of ice skates. Desperate times apparently call for trying to knock Seacrest on his butt on national television.

And things did indeed get desperate during certain points in last night’s coverage. Lolo Jones, the summer Olympic hurdler who has somewhat controversially become a bobsledder, only managed an 11th place ranking in the first two rounds of competition. American Julia Mancuso’s legs just gave out in the giant slalom event, prompting her to stop skiing midway down the mountain. Multiple dudes zipping their way through the snowboard cross bit it during their runs, often knocking fellow competitors out of contention in the process. Poor Lyman Currier took a bad spill in the halfpipe ski; it turned out he had torn an ACL. It was a night when anyone could get knocked out, discouraged and dragged down. But even on such a night, yes, there were some winners/heroes who must be recognized.

Lauryn Williams and Elana Meyers: Williams, the other track-and-field Olympian to turn to bobsledding during these Winter Games, ended the first day of competition in first place alongside her partner, Meyers. So apparently, it’s not completely impossible to transition from summer Olympic running to successful winter Olympic sliding.

Alex Deibold: This American managed to stay standing during those crazy snowboard cross races, winning bronze. He reached that medal-winning status after a semifinal run in which he literally slid his way, by the slimmest of margins, to third place over fellow American Trevor Jacob. The lesson: If anyone says you can’t win an Olympic medal by scooting on your butt, they are wrong.

Paul-Henri de Le Rue: This French snowboarder, remarkably, made it to the Olympics one month after being in an induced coma following a severe fall. We know this because seemingly every 10 seconds, the announcers would say, “This guy was just in a coma and now he’s going for gold.” Or: “Here’s de Le Rue, trying to go from coma to medal podium.” Or: “Oh, look, here comes coma guy, still breathing and ready for another run.” In all seriousness, it was quite impressive that he was able to get out there and compete, even more so since he ultimately finished in fourth. That obviously wasn’t enough to earn hardware, but it was definitely enough to prompt NBC announcers to praise his post-coma athleticism, over and over again.

David and Lexie Wise: David Wise was a winner because he won the gold medal in halfpipe skiing. His wife, Lexie, was a winner because she stood outside, under heavy wintry precipitation, to cheer for her husband while holding a huge picture of their 2-year-old daughter’s head attached to a stick.

Tina Maze: The Slovenian Beyoncé took home another gold medal, this time in giant slalom. But the real victory was ours, because, thanks to NBC, we got to watch part of her music video again.

The camera operators: With rain, snow and the combo platter -- the dreaded wintry mix -- splashing massive droplets onto camera lenses, the people capturing the competish in Sochi still managed to press on and continue filming. There’s no gold medal for Olympic coverage cinematography. But we viewers appreciated their efforts, even if the often humdrum action they captured may have driven at least a few people back to their ongoing "House of Cards" binges.

Tomorrow is another day, one that allows us to move onward, upward and back to the never humdrum world of ladies figure-skating.