$16 billion for a smartphone app is an awful lot of money. Is this how go-go booms start to blow up? 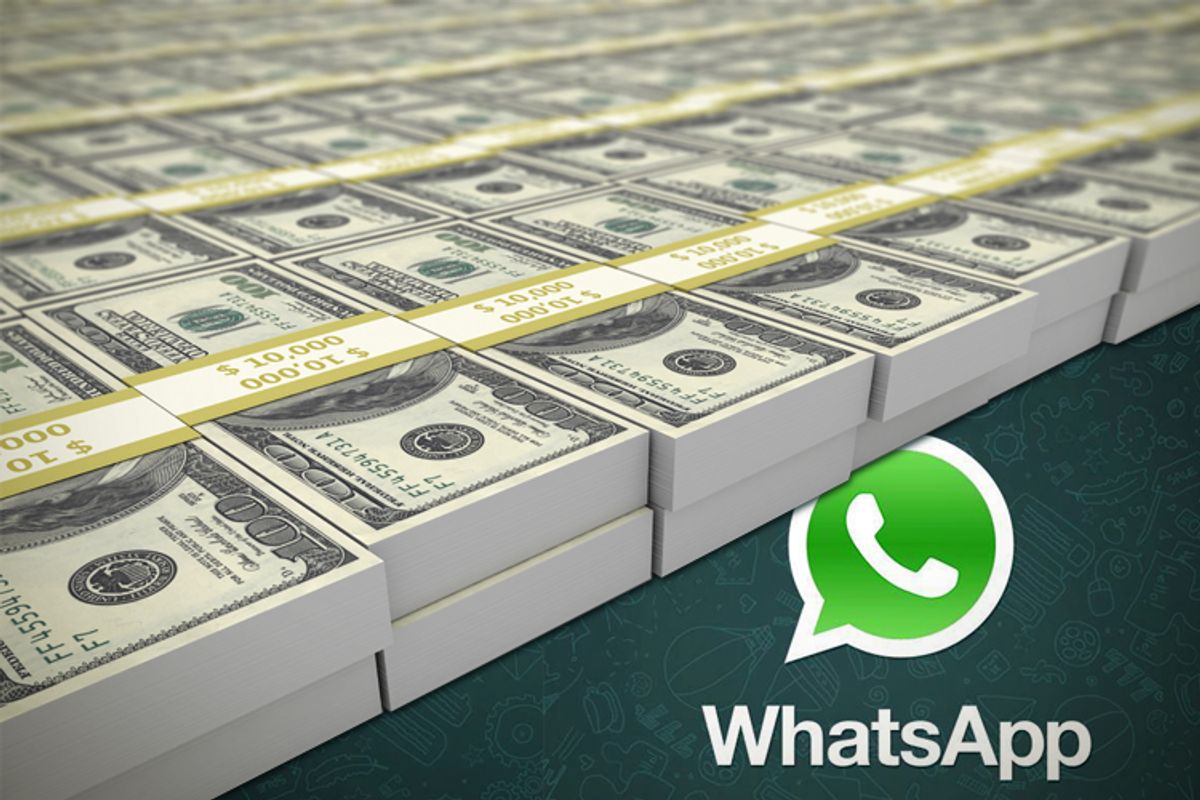 So this is what it feels like to smash into a new historical epoch. There was the day before Facebook bought WhatsApp, a popular -- and very profitable -- messaging service, for $16 billion (plus $3 billion more in restricted stock grants). Back then, a $4 billion offer for SnapChat seemed outlandish, and Google's purchase of a smart smoke alarm maker for $3.2 billion seemed more than a little frothy.

And then there was the day after, when everyone in the tech economy shook their heads, trying to clear the haze and daze from a paradigm-resetting explosion. The numbers associated with the WhatsApp purchase are eye-opening. It is, as the WSJ reported, by far the biggest deal ever for a venture-backed company. WhatsApp has only 32 employees, which means each of them is now valued at an average of half a billion. Remember when Facebook bought Instagram for $1 billion? Strangely, that seemed like a lot of money at the time for a picture app. Now it seems like a pittance!

WhatsApp is a legitimately popular service -- 450 million people use it every month for a very simple reason. It's a way to send text messages over the Internet without paying SMS charges to the phone companies. There are no ads at all on WhatsApp (at least for now!) -- just a $1 fee per year. An older generation with unlimited texting plans on their iPhones may never have even heard of WhatsApp, but you can bet that teenagers who have to pay for their texts know all about it.

In the increasingly high-stakes game of King-of-the-Internet that we are watching play out between Google and Facebook and Apple it may even make sense, strategically, to throw so much money at a mere messaging company. In 2014, it's grow or go bust. If it is true that teenagers are losing interest in Facebook, then I guess it make sense to just go and buy the service that the teenagers are supposed to be leaving Facebook for. If you can't keep 'em, buy 'em again!

It's a bold move, but maybe, just maybe, there's also a whiff of desperation in the air?

There are surely a great many start-up investors and entrepreneurs exulting in Silicon Valley today. More deals and more big paydays are on the way, and massive inflation is the order of the day. But I wonder if there isn't also a sense of fear beginning to penetrate the self-satisfied glee. There are only so many times that our minds can be blown before we start to hear the sound of bubbles popping. If you live in the San Francisco Bay Area, every single day you see more evidence of how the fountain of wealth creation here is warping the local economy -- astronomical rents, high-tension culture wars, the rococo efflorescence of decadent foodie culture. It all seems a bit crazy.

And then you see a smartphone app get sold for $16 billion and, well, you realize, yes, it is completely insane. Vast fortunes are being spent to hold the attention of the most fickle audience on the planet -- middle-class teenagers. The arms race for your smartphone clicks has gone thermonuclear. It is now time to legitimately wonder: How long can this keep going on?