Addicted to my cycling class

I used to make fun of people like me. Now, I can't believe how much money I've spent for one simple workout 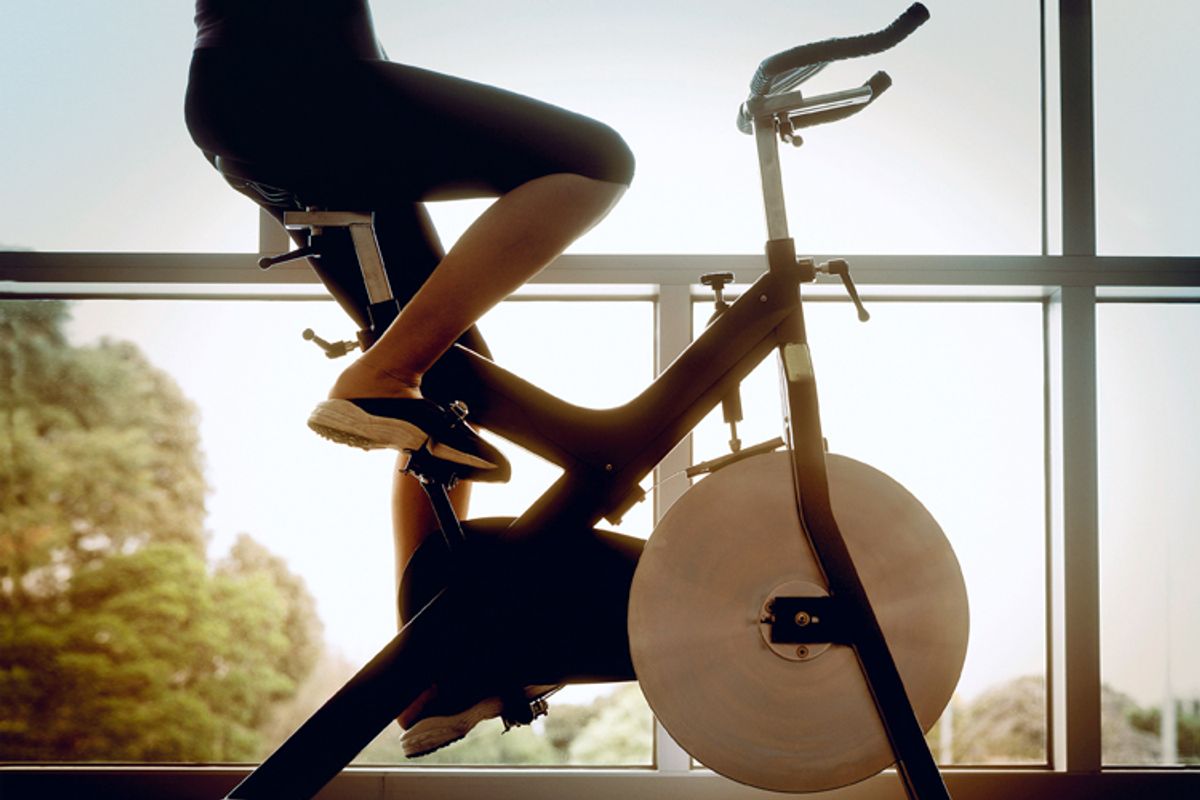 It was the socks that pushed me over the edge. I’d forgotten mine that day, and my cycling class demands that socks be worn under rented shoes, which are often still warm and damp (but somehow never smelly) from the last user.

The desk worker handed me a pair branded with the name of the company, SoulCycle, and he asked for my bike number, which is how you conveniently give them all your money without touching your wallet. This was the third time I’d bought socks, so it was time to find out how much they cost.

"Fourteen dollars" was the reply. Fourteen freaking dollars for a pair of socks. I had now paid $14 -- on three different occasions -- for some flimsy cotton?

And that’s when I snapped.

“That is obscene," I seethed to a group of stunned employees in head-to-toe SoulCycle gear. “Where do we draw the line, people?! Fourteen dollars? That just shows how overpriced everything else here is. Do you just make up these ridiculous prices and laugh when we actually pay them?!" The clerk exchanged a "yikes" look with a co-worker. Other customers quietly filtered into the studio behind me. Eventually, I sighed and did the same; I’d already paid for the class.

But I swore I was done with SoulCycle that day. I lasted a week.

I first read about SoulCycle in a New York magazine article that painted the spinning class as a cultish workout craze. I was intrigued. The article bowed in awe of SoulCycle's massive success while mocking its cheesy skull imagery, its "athlete-legend-warrior-renegade-rockstar" affirmations, and its instructor idol-worship. The whole spectacle seemed extreme and bizarre and silly. I couldn’t wait to experience it firsthand.

With exercise, I'm an extreme kind of gal. When regular yoga got boring, I upgraded to hot yoga. I got so hooked on it that I completed a 30-day challenge, posing and stretching in a sweat lodge for more than 10 hours a week like it was a part-time job. I did the aerial classes, and the Pilates reformer. I hiked the four-day trail to Machu Picchu and the far more terrifying Ciudad Perdida in the Colombian jungle. I pry myself from a perfectly warm bed at 5 a.m. on Sundays to run half-marathons. Exercise has to push the boundaries a little, otherwise it's just another Zumba class. Yawn.

Fast forward one year, and SoulCycle is my tormentor and my solace. This is not a cry for help. I'm complacent in the relationship.

It's almost scary how little it took to hook me. Tiny details like amenities -- the soft, fresh towels, the good hair dryers that are nicer than mine at home, the locker rooms stocked with Q-tips and hair ties and razors and lotion -- were enough to get me paying $34 per class ($39 with shoe rentals and water). Everything smells nice. Everyone is nice. Everyone looks nice. All around, signs encourage you: We aspire to inspire. Change your body / Take your journey / Find your soul. Corny? Maybe. But I relished this comfort.

The classes themselves have the feel of a dark, sweaty, cramped, loud club -- an environment I'd normally avoid. But here it's like walking into The Zone. Even if I want to roll my eyes when an instructor commands me to "leave it all on the handlebars" or to "ride through my fear," the constant validation seeps in, and I walk out punching the air. Once I visualized myself riding a bike up the side of the office building I'd be interviewing for a job at later that day. (I didn't get the job, but I walked in reeking of confidence.)

People will do a lot of crazy things to get that feeling. Rational Erin, who works in the not-so-lucrative field of journalism, and who is supporting her slightly underemployed boyfriend, would never pay $39 for 45 minutes of convenience, amenities and feel-good vibes. When I was 23 and pulling a stupid-low salary, I couldn't afford to spend $39 on food for the week. Even eight years later, one class costs more than I would prefer to spend on an entree at a nice restaurant, a pedicure, a cab to the airport or a week's worth of laundry.

Before my first class, the instructor said, "Start setting aside a part of your paycheck now, girl. You're going to be hooked." I nodded, thinking, “Haha, sure. Like I'm one of these lemmings."

I’d met these people, the SoulCycle addicts who get anxious if they can't go twice a day.Two times a day! They buy the "SuperSoul" package, which costs an utterly insane $70 a class, just to get early access to sign up for classes. And of course, there is the woman from the magazine article who spends more than $26,000 a year on classes. This is crazy balloons, I thought. I will not become this person.

So I set boundaries: I would only go once a week, when I wasn't traveling or training for a race. That's $136 a month, which I justified with the fact that my gym, a total dive called "Richie's" on 53rd Street in Brooklyn, costs just $180 a year.

But this class was not designed for setting boundaries. Riders sign up for classes via the company's slick website, where just one click buys you a whole series and one more click reserves you a bike. Just one little click. Boop, you're enrolled in this class. Boop, you're in another one. Boop, there's a third. "Your SOUL is confirmed," an email declares for each one. (The reward for buying in bulk is $1 off.)

Even with no boundaries, I never felt resentful about the money. Sure, my credit card is hovering dangerously close to its maximum limit, and sure, I might notice my bank balance is frequently down to double digits right before payday. But I never attributed any of that to my very expensive spin class habit. While most indulgences, like a fancy meal or a pricey accessory, might come with some guilt attached, that doesn't happen with this class. The validation is built-in. Each time you go, you're improving yourself. Isn't that worth it?

But as in all relationships, mine hit turbulent waters. Like the day I forgot to pack a shirt, so I grabbed a plain white tank top from the studio's shop. That set me back $44. But OK, fine, whatever. Then came the incident with the $14 socks. Whoops.

After that, I didn’t want to show my face. Partly because I was embarrassed by my outburst, and partly because I felt like a sucker. It's just a stupid spin class. It is not a "lifestyle," or an inspiration or even a cult. I am being ripped off, plain and simple, and I'm not of an income bracket that can afford to be ripped off.

But it lured me back in. I can't stop. Deep down, I don't want to stop. I keep asking myself why it's so hard to stay away, and my answer each time is simply that "it works." Unfortunately, I am in great shape.

I could have achieved that any number of less costly ways. Running is free. Yoga classes are half the price. More important than effectiveness, I've realized, is the fact that the class isn't actually that hard. At just 45 minutes, I rarely think about an upcoming class the way I dread a long run. And I rarely have those "OMG THIS SUCKS" moments when I'm in the class. That's no accident, either. The whole thing is designed to feel like a dance party -- a fun group of girlfriends getting together for a fierce night on the town. The intimidation factor, along with the likelihood of skipping a class once you've paid for it, is zero.

It occurred to me that I get sucked into these extreme forms of exercise because I don't actually like exercising. I'll do anything -- climb walls, tap dance, hike a mountain -- to trick myself into getting a workout. Exercise is tedious and grueling, but the masterminds behind SoulCycle have designed a manipulation machine for lazy exercise-haters like me. Every Monday at noon I get a reminder to sign up for a week's worth of classes, and every Monday at noon, I obediently do just that. This is how so many perfectly rational humans like myself have found themselves handing over thousands of dollars to our SoulCycle cult leaders. They are just that good, and it's infuriating.

And fine, I'll admit it: I bought into the spiritual angle, too. The idea of finding confidence and peace in an overpriced exercise class may sound like a pathetic cliché, and that's why I'm so hesitant to cop to it. But if it didn't work, I wouldn't keep bankrupting myself for it. The high goes beyond a jolt of adrenaline. The instructors preach validation and discipline, and I am there with an eager "Amen."

Before writing this, I was scared to add it all up. But now I know: I spent $1,922 last year. Last month the company emailed me with a free class, as a thank you gift for being such a loyal SoulSister. At $1,922 down, that's less generous than a loyalty punch card from my local sandwich spot. But by now I've stopped fighting it. I've thrown all rationality out the window, and with it, a large chunk of my paycheck. Whatever it gives me, I’m willing to pay just about any cost.

Erin Griffith writes about tech startups for Fortune magazine. Her work has appeared in Adweek, BBC, Cosmo, and BUST. Follow her on Twitter: @eringriffith.