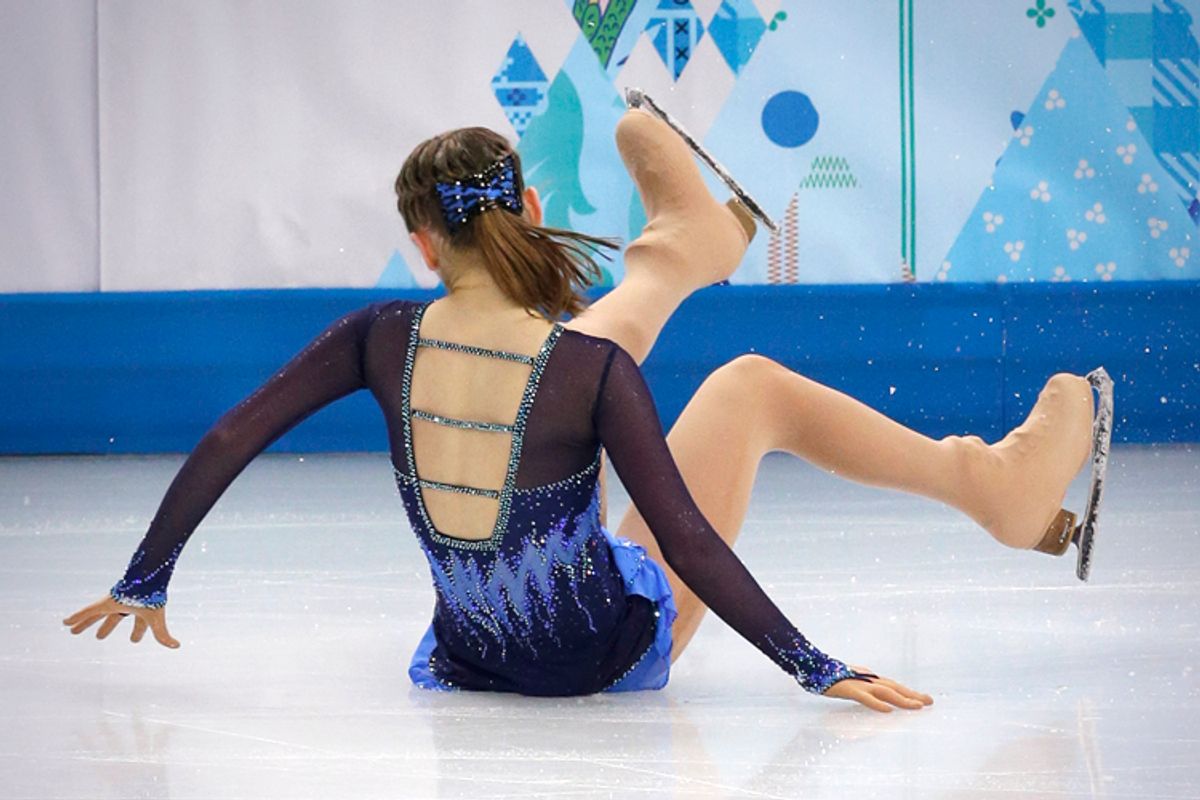 Yulia Lipnitskaya, the Russian figure skater who stole the hearts of viewers around the world during last week’s team competition, was poised to become the darling of this year’s Olympic games. At 15 years old, Lipnitskaya has been hailed by the media as a child prodigy, barely old enough to qualify for competition. She beat the cutoff by just 26 days. 1998 gold medalist Tara Lipinski predicted that Lipnitskaya would be the surprise of this year’s Olympics, but Lipnitskaya’s rise to prominence proved little shock for Russia, where she has become a symbol of the country’s figure-skating renaissance. Credited for her form and flexibility, Lipnitskaya balances the elasticity of youth with a mature professionalism and reserve.

However, predictions of Lipnitskaya’s dominance proved premature, as the young skater suffered a devastating tumble in yesterday’s short program, dashing her hopes of a gold medal. After a characteristically flawless routine, Yulia Lipnitskaya capped off the contest with a botched final jump that sent her crashing to the ice. Lipnitskaya’s coach chalked it up as a “technical error,” and the skater finished in fifth place in the competition, while South Korea's Yuna Kim nabbed first.

Lipnitskaya is hardly the first media darling to come up short in the women’s skating competition. Michelle Kwan struggled for years to live up to outsize expectations, settling for a silver medal in the 1998 Nagano Olympics. 2002 would prove her last chance at redemption, and Kwan suffered a devastating slip during a routine triple flip. Kwan became a punch line, the moment remembered as the fall heard around the world.

If it’s any consolation to Michelle Kwan or Yulia Lipnitskaya, neither can hold a candle to France’s Laetitia Hubert, who fell four times in 1992’s Albertville games. The clip is available on YouTube and it’s torture to sit through, like watching "Jaws" take place on the skating rink. At the end of her routine, Hubert bows in a moment of resignation and despair, knowing that she’ll go down in history -- but for all the wrong reasons.

At the Winter Olympics, figure skaters rule the games, dominating press coverage and media attention. Female figure skaters become household names, whether due to victory, as in the case of the aforementioned Lipinski, or infamy, like Tonya Harding, whose scandal proved irresistible tabloid fodder, dominating gossip rags for years. The details are Olympic legend: The 24-year-old Olympic hopeful allegedly hired her ex-boyfriend and bodyguard to attack competitor Nancy Kerrigan, bruising her leg with a baton. After healing from the injury, Kerrigan would go on to place second, while Harding finished in eighth. Despite not actually winning the event, both women are more widely remembered than Kristi Yamaguchi, who actually won gold in 1992. The two short program broadcasts in 1994 pulled in Super Bowl-size viewership, averaging over 70 million viewers.

Harding and Kerrigan were the perfect example of our national obsession with watching pretty young women fall from grace. Figure skaters are so mesmerizing to American audiences in part because they're consummate athletes whose sport also performs traditional femininity. A skater is everything a woman is taught to be, graceful and elegant, an ethereal figure reduced to the very fact of her body. She can seem more than human, almost angelic, until the moment she is brought down to earth. Ashley Wagner’s “bullshit” reaction to her lower-than-expected score last week perfectly broke that fourth wall. In that moment, she became human again. The result lives on in GIF form for all eternity.

The fall from grace was literal in the case of Yulia Lipnitskaya, who dealt with her own underperformance not with outrage but tears. Our fascination with her spill, and others like it,  embodies our complicated relationship with women. From "Revenge" to the "Real Housewives" series, our media culture revels in seeing women torn apart, whether relieved of their hair extensions or exposed for their flaws. A figure skater executing a perfectly graceful routine until the moment she slams into the ice satisfies this obsession perfectly.

On Thursday, Lipnitskaya will be fighting an uphill battle during the finals, almost 10 points behind Yuna Kim in the standings. As USA Today’s Christine Brennan predicts, the two women will have a “few more skaters between them when the evening is over,” and Ms. Lipnitskaya is a long shot for a medal. But she's already secured herself a place in our collective memory of these Olympics, perhaps as much for what she symbolizes as for what she does.

Correction: An earlier version of this story misstated Yuna Kim's nationality. She is competing for South Korea.