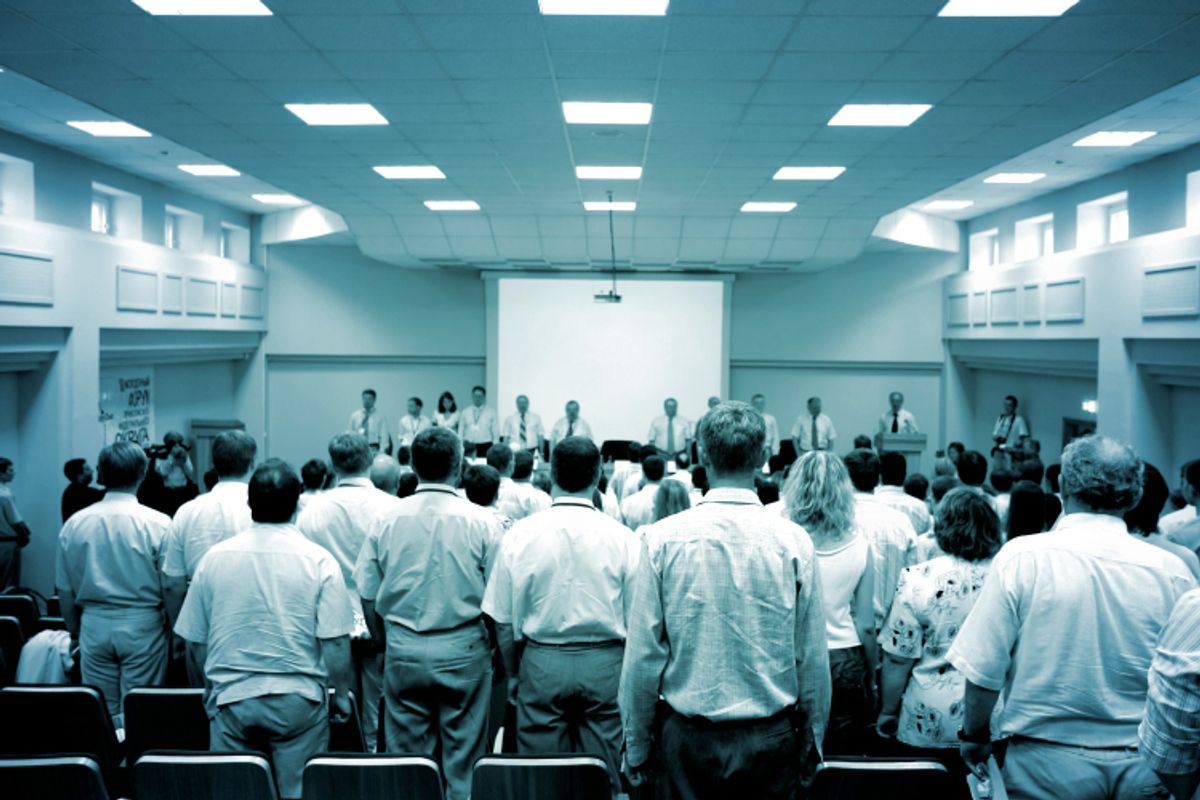 Bias against women in science reared its ugly head last week when the preeminent conference for theoretical chemistry posted a list of two dozen confirmed speakers without including a single woman.

A group of female scientists promptly called for a boycott, but faced backlash from a prominent chemist who dismissed their efforts as “nonsensical” and “trendy whining about supposed 'gender inequality.'"

More on that in a bit, but first some background. The International Congress of Quantum Chemistry is held by the International Academy of Quantum Molecular Sciences and scheduled for June in Beijing next year. When the conference revealed its initial speaker list (since taken down from the website), every one was male.

“It happened again -- another major theoretical chemistry conference features an all-male program,” reads the boycott petition, which was written by theoretical chemists Anna Krylov, Emily A. Carter and Laura Gagliardi and received 835 signatures within a few days.

The writers of the petition contend that the male-dominated gathering is not an isolated incident.“ICQC/IAQMS is a part of a much larger problem,” explained Krylov, a professor at USC. “Biases against women in science are pervasive; they are well quantified and well documented.”

Notably, there are only four female scientists among the 110 living members of IAQMS, which elects new candidates by internal vote. Ten out of 102 talks during the previous three conference were given by women, and only two female chemists have been awarded medals over the past decade, according to the instigators of the boycott.

“These numbers do not reflect the proportion of women active in the field,” said Gagliardi, who is a professor at the University of Minnesota. “Some 50 years ago the gender distribution in Quantum Molecular Sciences may have been so skewed, but nowadays things have changed.”

Conference organizers responded to the boycott almost immediately. Zhigang Shuai, a professor at Tsinghua University in China and chair of this year's ICQC, wrote a letter to explain that one woman had been among the original invitees, but had not responded, and that he had already reached out to industry leaders to recommend more female scientists for the remaining 11 or 12 speaker slots that hadn't yet been awarded.

IAQMS President Josef Michl spoke up to apologize for “the premature public release of a partial speaker list “ and promising that “the gender representation among speakers at the Beijing ICQC will be balanced,” noting that many of the people on the original list were obligatory selections.

The creators of the petition acknowledged the apology while reiterating, “It is unacceptable to invite women as an afterthought, after 'real speakers' are invited. Given the remarkable achievements of female scientists, this is unjustified.”

Not everyone was supportive of the proposed boycott. James Kress, a member of the Worldwide Who's Who for Excellence in Science and Engineering, a nonprofit dedicated to cancer treatment research, took issue and aired his grievances on CCL. Here is Kress's original message, in its entirety:

Has anyone determined the number of black/ Hispanic/ Asian/ American Indian etc. speakers to ensure there is no "racial inequality"?  How about the number of speakers from every country on the planet to ensure these is no "ethnic inequality"?  How about the height of the speakers?  Has any ensured there is no "vertical inequality" by making sure that people of all stature are "properly" represented.  What about weight?  We wouldn't want to promote "Girth Inequality", now would we?  What about age?  Hair color?  Shoe size?  Marital status?  Claimed sexual orientation?  Eye color?  Nose length?  Ability to hear?  Ability to see?  Ability to walk? Ability to talk?  Every other "disability" status?

As one can see, once CCL starts down this path there is no end to the amount of whining and complaining that the list will have to endure.  It will render CCL a wasteland of "Political Correctness". Perhaps CCL should dedicate a part of their platform to related social issues such as these."

If people want to discuss "gender inequality" they should start a forum on LinkedIn or Facebook or any of the many Social Media sites; or a WWMWICCL (We Want More Women I Computational Chemistry List) email list to which interested people may subscribe.

If you INSIST on discussing this on CCL, the please place an identifying header on all your emails so that those of us who care about SCIENCE, as opposed to trendy whining about supposed "gender inequality" and other fashionable modes of Political Correctness can at least have a hope of filtering out all of the nonsensical content and peruse the SCIENTIFIC content.

Kress immediately took criticism from colleagues pointing out decades of scientific research on the implicit and explicit biases that women face in STEM fields. “We are all creatures of our culture and, worldwide, there is a culture in science that works against women that reflects hundreds of years of history and tradition,” wrote Chris Cramer, a University of Minnesota professor (and Gagliardi's husband) in a public response to Kress.

“Do I think that the IAQMS is ridiculously dominated by old white guys?,” wrote Cramer, a self-described old white guy himself. “Well, yes, I do.”

The problem goes beyond a lack of diversity for its own sake. “One of the beautiful things about conferences is that they provide a platform for showcasing a large group of people working on a problem. If you omit an entire population, then you not only hurt those you omit, but also yourself and your own opportunities to learn and develop a research program, not to mention recruiting new talent to our programs,” Aurora Clark, a chemistry professor with Washington State University, wrote on the Computational Chemistry List, or CCL, the industry's international electronic forum. “What if the next Einstein is an undergrad working in your group and she decides she wants to go into Biology because she doesn't see anyone that respects her ideas or believes in her potential?”

The 1999 book by Virginia Valian “Why So Slow? The Advancement of Women” collected research showing that unconscious assumptions about gender lead to skewed results in perceptions and evaluations of performance that disfavor women. And a Yale study released last year found that given identical resumes, professors at six major research institutions gave higher ratings and suggested higher starting salaries to applicants with male names than those with female names.

Janet Koster, executive director and CEO of the Association for Women in Science, said of the uproar over the conference, “As we say at AWIS, you are probably part of the problem if you don't think there really is one!” AWIS recently published a book, Equitable Solutions for Retaining a Robust STEM Workforce, which included research showing that all-male committees picked female conference speakers at a disproportionately low rate to the percentage of experts in a particular field.

“So, bias may play a role in the representation of women at conferences, which is one more way that women wind up appearing marginalized in the STEM fields and thus publically presenting fewer positive role models as well as limiting their own career networks,” the book concludes.

Kress stood by his position over the phone. “It's a shame that scientific discourse has to dissolve into this socio-political discourse,” he said. “It's a real tempest in a teapot.” Kress said he had received emails both in support and opposition to his position, and “only one really obscene one”-- from a UC Irvine student who called him an asshole.

“Inequality is a fundamental characteristic of any collection of more than one human being,” he said, and suggested that if people don't like the current conferences they should start their own. “You're not entitled to excel. You have to earn it. I guess that's kind of an old fashioned perspective but it's certainly mine.”

Kress doubled down in a followup email. “Given that everyone has unique DNA, it is scientifically certain that no two people will be identical in terms of capabilities,” he wrote. “ALL SORTS of differences in capabilities exist in Chemistry, Physics, Biology, Math, etc. Those who work harder, overcome their capability deficient and make themselves equal to or better than their colleagues. Hard work is the way to address the capability issue and thus achieve equality.“

Meanwhile, the boycotting scientists vow to continue to advocate for more inclusive representation, in the conference and the field in general. “It really was only the tip of an long-floating iceberg,” Gagliardi said. “We are concerned that the status quo has persisted for so long with no proactive efforts to achieve change, or even acknowledge that bias may exist.”