The Salon interview: How Seth Meyers got ready for "Late Night"

"I tried to hire as many people as I could find that were funnier than me," Meyers told Salon of his new staff 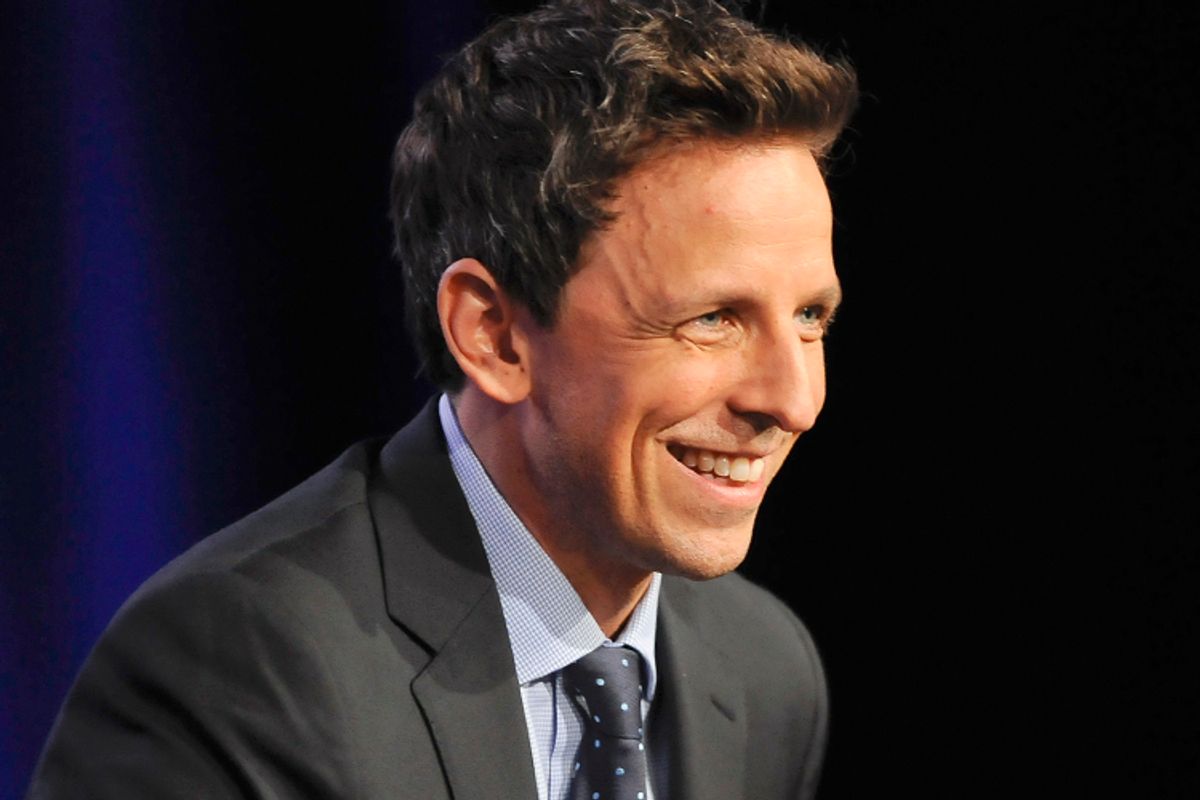 On Feb. 24, former “SNL” head writer and “Weekend Update” co-anchor Seth Meyers will become the fourth man to host one of the most prominent mainstays of late night television. And while hosting an hour-long show that runs four nights a week is already a significant challenge, Meyers inherits the show from former “SNL” colleague Jimmy Fallon, who turned “Late Night” into a variety show and viral video hit machine.

New York Times national media reporter and bestselling author Bill Carter, who has covered the turbulent past of late night television in “The Late Shift,” and “The War for Late Night,” told Salon over the phone that Fallon will be “a tough act to follow.” Fallon, who has had a gangbusters week at “The Tonight Show,” closed “Late Night” with a finale that pulled in the show’s biggest audience in more than 10 years.

But Carter is quick to put the shift in perspective. “I thought Conan [O’Brien] felt like it would be almost impossible to follow [David] Letterman, and Fallon thought it would be almost impossible to follow Conan,” Carter recalled. “So it's kind of a strange run of history but you know the guys who leave, leave behind big popular shows and Seth is well aware of that.”

Meyers will have to brand the show as his own, but talking to Salon over the phone, the host was hesitant to provide too many details as to how he will do that. “It just feels so strange to talk about comedy before you do it,” he said.

We do know, however, that he’ll be leaning heavily on his “SNL” experience. His former cast mates won't be too far from his new office, which remains in NBC’s 30 Rockefeller Center. Former “SNL” cast member Fred Armisen will lead the 8G Band, and, from time to time, the show will call back to Meyers’ “Weekend Update” days with fake guest interviews. (Bill Hader's iconic Stefon, for example, is likely to be a guest.)

Though he is not looking to reinvent late night television, the 12-year “SNL” veteran does hope to take some risks with the show. “The nice thing about having a nightly show at 12:30,” he explained, “is the previous hosts have all shown that it's a piece of real estate where you can try to be as creative as possible and take some risks that you probably can't take in prime time, and to some degree maybe can't take at 11:30.”

Crucial to maintaining this philosophy will be the show’s writing staff, many of whom are also performers. Meyers said that his “biggest takeaway” from “SNL,” where he was a sketch performer in 2001 before he transitioned to the writing staff in 2005, was that “I enjoyed being out onstage with someone else and it was often helpful if that person was funnier than me.” For "Late Night," he said, "I tried to hire as many people as I could find that were funnier than me.”

Another unique aspect of “Late Night With Seth Meyers” is that it boasts a diverse staff, reportedly the first network late night talk show to hire a black female writer. The consideration is, at least from the public’s perspective, in line with “SNL” executive producer Lorne Michaels’ recent push to bring black women to the show in 2014.

For his part, though, Meyers stated that he didn’t specifically look for diversity in his staff -- it just sort of happened. “I have to say the field of applicants for these jobs is becoming more diverse, I've just noticed in my 12 and a half years of doing this,” he said. “Certainly, you know we have diversity in our new writing staff, but it wasn't because we went out and looked for it. It was just because some of the many funny people we saw, it was a very diverse field.”

But the biggest challenge for Meyers, whose screen time has been largely limited to monologue-type jokes on “Weekend Update” for the past eight years, will be interviews. “The interview part of the show is the thing I have the least experience with, and I feel like it's a skill you have to learn by doing,” he says. “I'm just looking forward to starting doing it because I feel like I'll make a lot of mistakes along the way but I can't make them until we start.”

The test shows in the two weeks prior have helped calm the future host’s nerves a little bit, at least. “I thought those were going to be really stress inducing,” said Meyers, “but they've kind of had the opposite effect of giving me a sense of how the actual show will feel.” The truly stressful part, the future “Late Night” host explained, has been the anticipation and buildup after he found out about the gig in April (the news was announced in May). “When you consider April to late February, that's almost a year that I've had this job coming and the stressful part is just having to talk about it, seeing that I had no idea what it was going to be,” he said.

“So now that it's getting closer, I'd so much rather show people the show than tell people about what it's going to be and that to me will be a stress reliever,” Meyers added, though over the phone he sounded both excited and at ease. “With that said, come Monday the 24th, I might be there talking to Joe Biden thinking to myself, ‘Well this is a more stressful part than any of that other stuff I was worried about.’"

He's gotten good advice, he says, from his predecessor, Fallon, and mentor, Michaels: "You have a plan as to what you accomplish in that first night, and first weeks, and first months. And obviously you're going to miss a few times, but you shouldn't over-course correct based on the first couple times out."

“SNL” has become a launchpad for the iconic role -- the show has produced the last three “Late Night” hosts, including former writer Conan O’Brien. And Michaels, who also executive produces “Late Night” and now “The Tonight Show,” has served as the mysterious puppet-master behind the scenes. Meyers got to know Michaels when he became a writer for “SNL,” “because that meant we talked a lot more about problems on the show and the best approaches on how to fix them."

But the comedian, who remained at “SNL” until just a few weeks ago, hadn’t considered the “Late Night” host gig until Michaels more or less offered it to him last year. He thought "Weekend Update," another "iconic desk job in television, was the last one of those I'd ever get, and I certainly never foresaw this happening.

“I don't think anyone can succeed at the show if they're worried about their next step,” he explained. “['SNL'] is too hard, it's too hard to sort of succeed week in and week out with that show while you’re focusing on anything else, it takes 100 percent of your focus to crack the ‘SNL’ nut week in and week out.”

Carter, for one, thinks Meyers is likely to succeed in his new role despite the high bar set by Fallon. “I think he has a really good chance to succeed because he's a really talented, funny guy -- very high intellect, very smart, extremely capable and he's also mature,” he observed. Citing his appeal from “SNL,” Carter added that “the audience is ready to embrace him as long as the show is funny, and I think he knows how to make the show funny.”

To succeed, however, Meyers will need the freedom to experiment with the show's format, style and voice. And it helps that Michaels, whom Meyers considers a “friend” and “supporter,” encourages creative risks without imposing any numerical goals or targets. “There may be someone in a glass tower somewhere that has those targets for me,” Meyers joked. “They've been kind enough not to share them.”

“You know one of the real benefits of staying at NBC and staying in the building and staying with Lorne is you believe people when they tell you that they're going to be patient,” said Meyers. “With that said, patience could go out the window with results. Hopefully we'll justify their patience with us."