They really are concrete jungles! Why you'll never think about cities the same way again

While urban development might seem like a blight on the environment, the truth is actually much more complicated 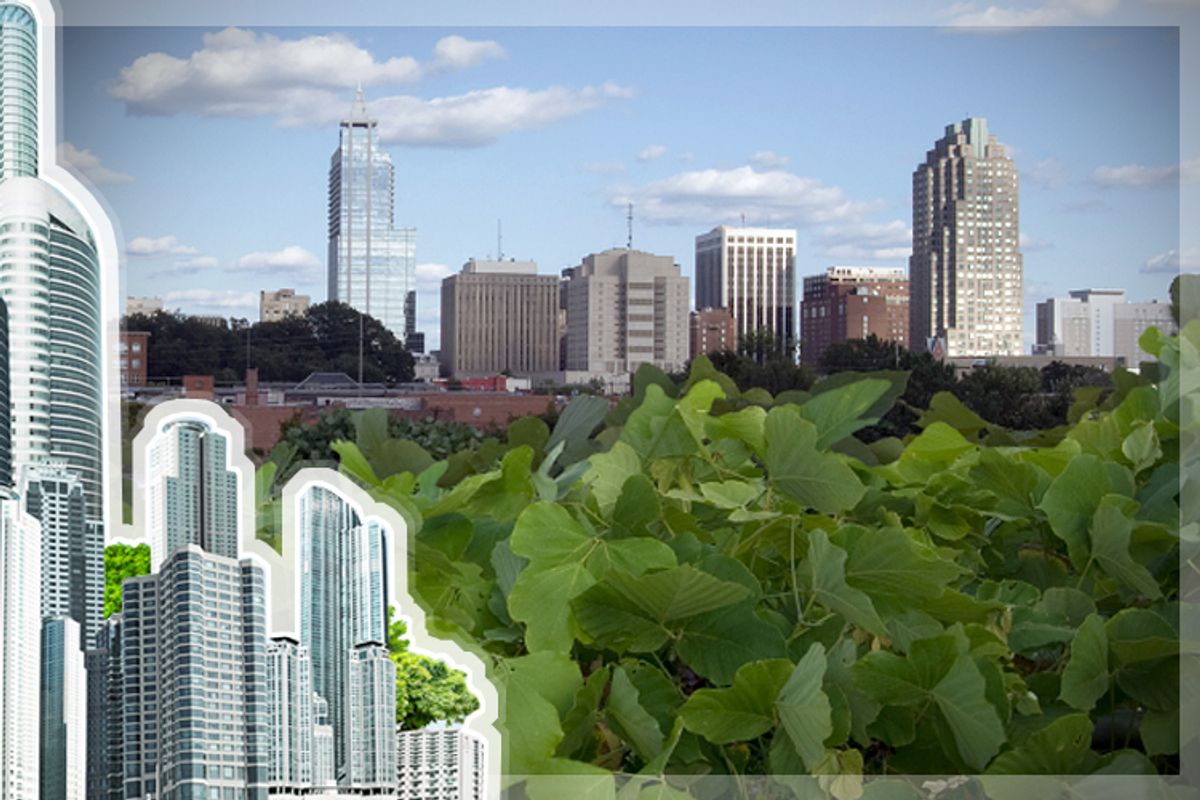 Last summer, bird-watchers confirmed the discovery of a new species of bird in Cambodia: Orthotomus chaktomuk, or the Cambodian tailorbird. It was not an event of particular biological significance (15 new species of birds were discovered in the Amazon in August alone) but it was striking for one reason in particular: This species of tailorbird was discovered not in an unspoiled rain forest but within the limits of Cambodia's capital, Phnom Penh -- a city the size of Philadelphia.

We don’t typically think of the city as a likely habitat for natural life -- save rats, roaches and pigeons (but more on them later) -- let alone as a hiding place for an undiscovered species of bird. But a new paper, published last week in the Proceedings of the Royal Society B, belies that notion. A team of 24 researchers has surveyed birds and plants in 147 cities, and found that cities much more closely resemble their native habitats than they resemble each other. The flora and fauna of East London, for example, would be more familiar to a farmer who had lived on the Thames a thousand years ago than to a modern-day visitor from Brooklyn or Hong Kong. While this might seem like a minor discovery to some, it's one that actually forces us to reconsider the environmental impact of the city.

The idea for the study, led by Myla Aronson of Rutgers, was simple: Compare urban data on plant and bird species with range maps to see how closely a city reflects its ecological birthright. (Anything intentionally planted doesn’t count.) With help from University of California Santa Barbara’s National Center for Ecological Analysis and Synthesis, the researchers compiled the largest-ever global data set of urban birds and plants, from cities in 36 countries and on six continents.

What the researchers found was a stunning level of native diversity in cities. The median city in the study has about 110 species of birds, of which over 95 percent are considered native; and 766 species of plant, 70 percent of which would have been growing there before urbanization. Ecologically speaking, cities are not replicable, concrete monoliths. Rather, each has a unique “bioprofile” -- a kind of ecological fingerprint -- that belies the notion of an environmental dead zone.

That doesn’t mean that cities are a great substitute for the natural habitats they replace. Generally, only a small number of species (one in 12 birds; one in four plants) survive urbanization in place. This has conservationists worried. The pace of urban growth worldwide is the equivalent of building a city the size of Vancouver each and every week. Between now and 2030, we will urbanize a portion of the globe the size of Mongolia. And because the most successful human settlements tend to occupy fertile and fragile lands -- river deltas, estuaries and boundary ecosystems of all kinds -- the ecological impact of a city is disproportionate to its size. But then, too, the absence of nature in cities is to be expected. Creating an environment free from the twisting vines, buzzing insects and predatory beasts of the wild is kind of the point.

“Yes, there’s bad news: We’ve lost species,” says Madhu Katti, a professor of ecology at California State University, Fresno, and one of the study's co-authors. “And yet, these are not national parks we’re talking about; these are concrete cities. And there are still plenty of species.” Singapore -- hardly a rugged and untamed metropolis -- alone harbors 12 threatened species of birds and 41 threatened species of plants inside the city. On the whole, that's good news, even if it also places greater pressure on cities to consider their role in the ecosystem.

Not only are cities not ecological steamrollers, they show surprising internal variety. “As the world becomes more global and more homogenous, we’re creating very similar environments worldwide,” notes Frank La Sorte, an ornithologist at Cornell and co-author. “There’s potential to go more and more in that direction as cities become bigger, as population grows. As goods and services are transported around the globe, you’re going to be transporting invasive species as well. [But] right now that doesn’t appear to be the case. It’s certainly less homogenous than we had expected.”

Of course, it’s also true that in the world of birds and plants, as in human society, there is such a thing as a cosmopolitan – the city-dweller who feels equally at home in San Francisco, Milan and Beijing. Four birds occur in more than 80 percent of the cities studied, and 11 plants occurred in more than 90 percent of the cities. On the plant side, those include phragmites, meadow grass, shepherd’s-purse; weeds, all of them, and seemingly spread by European colonization. In the air, it’s the usual suspects: the rock pigeon, the house sparrow, the barn swallow and the European starling. “These four have become completely adapted to urban life,” Katti says. “That’s not much of a surprise. But they don’t actually dominate as much as we think they do.” Those species -- representing the closest thing we have to a pan-urban bio-profile, occurring in cities across the globe -- represent only a small fraction of a city’s natural diversity. Invasive species have not conquered metropolitan ecology.

Not all cities are equal stewards of native flora and fauna, though. One of the biggest predictors for a city’s biodiversity is its urban design. Territory as varied as backyards, street trees and highway medians can play important roles in greening a city. In fact, the amount of green space is a stronger predictor of the density of biodiversity than a city’s size. A metropolis with a sizable network of parks can contain more species per square mile than a much smaller but more compact city.

That finding endows urban designers with power and responsibility, and makes Katti feel optimistic. “Our data show that even cities which are never built with biodiversity conservation in mind still provide habitat for a fair number of native species, including endangered species,” he says. "It’s true for birds, it’s true for plants, it’s true for mammals — coyotes or foxes in California, primates in tropical cities in Asia and Africa. Even though nobody built with green design in mind until recently, cities provide habitat for so many species. Imagine what we could do if we became more ecologically conscious in designing cities going forward.”

Building for biodiversity brings several advantages. A diverse city is a powerful resource for education and research. It’s often associated with parkland and other green space, which in addition to various health benefits can help relieve overburdened water infrastructure. Introducing or encouraging native species can rejuvenate natural environments like marshlands, a frontier that cities are cultivating to protect themselves from storm surges. (For a powerful example of ecosystem restoration, watch what happened when wolves were brought back to Yellowstone National Park.)

Finally, in a world where architecture, food, language, fashion and commerce are increasingly globalized, a city’s native flora and fauna constitute a kind of civic identity. There may be neighborhoods in London and Paris that resemble Singapore or Hong Kong; but no one would confuse Prospect Park with Chapultepec. Cities are converging, but their natural environments stand defiantly apart.