GOP's "damaged-goods" primary: Why Christie and Walker are staring each other down 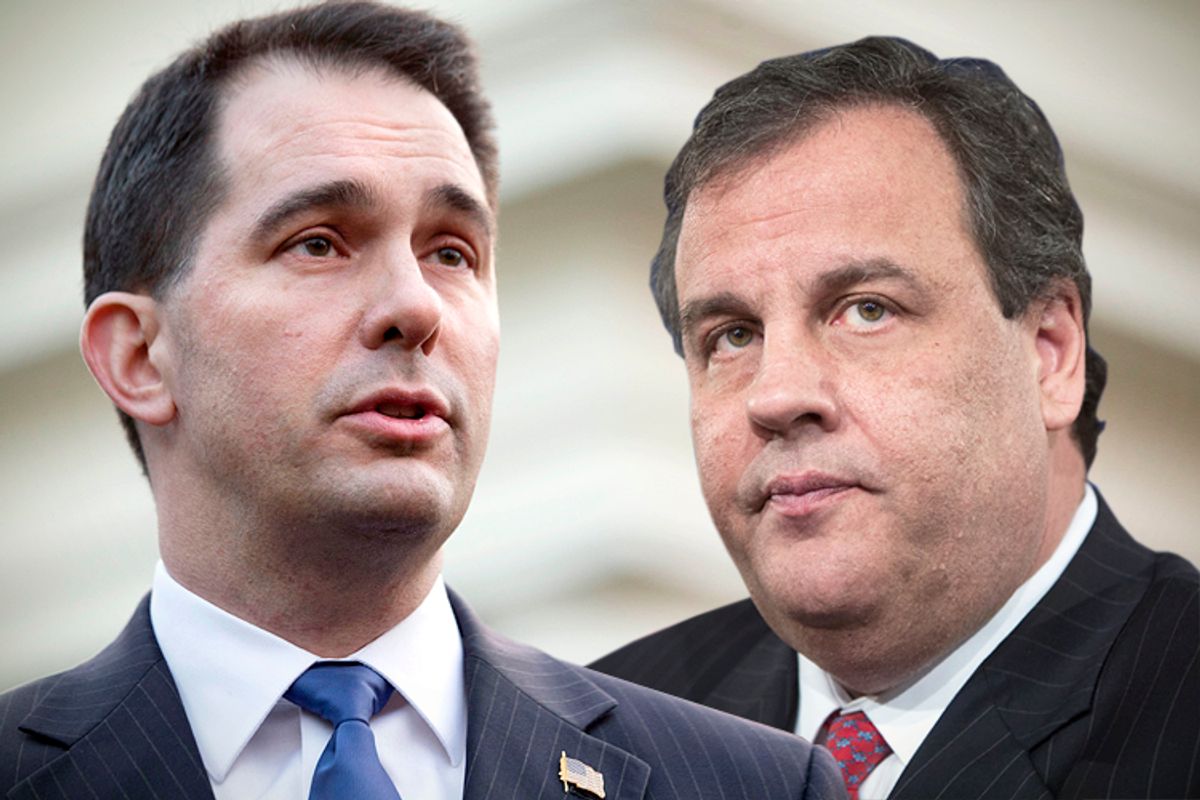 You’ve got to hand it to Wisconsin Gov. Scott Walker: He’s enduring his current political troubles defiantly, even going on the offensive this weekend by tweaking New Jersey’s embattled Gov. Chris Christie over Bridgegate. Christie’s troubles are “just beginning,” Walker slyly told reporters at a Republican Governors Association event this weekend, while his own, he claims, are behind him. “A Democrat district attorney looked at it and he’s done. It’s done.” Christie, by contrast, has “ the legislature which is not on his side politically, and they’ll probably drag it out for some time.”

In other words: Scott Walker to big GOP establishment donors: “I’m your guy!”

Typically, though, Walker took his claims a little too far: While one investigation into campaign law violations is closed – after six Walker aides and associates were convicted – another is ongoing. And Walker made a big mistake when he tried to feed his “it’s old news” line about his troubles to Fox News’ Chris Wallace. Wallace shot back: “Because of this dump of 25,000 documents, it’s new news to a lot of the people in the state and it’s been big news in local papers in Wisconsin.” (It was actually 27,000 documents, and they showed, among other things, that Walker’s aides set up a secret email system so campaign workers and Walker’s county employees could coordinate their work.)

Then Wallace set to grilling Walker about details, but it turns out Walker doesn’t do details:

WALLACE: In one email that was released this week, your then chief of staff Thomas Nardelli, let’s put this up on the screen, writes campaign and county workers that you wanted to hold daily conference calls, “to review events of the day or of a previous or future day so we can better coordinate sound timely responses,” and in another e-mail county administrative director Cynthia Archer suggests that colleagues should use a private e-mail account. “I use this private account quite a bit to communicate with SKW,” that’s you, “and Nardelli, the former chief of staff.” Question: if county workers were doing nothing wrong, why should they be using a private e-mail account?

WALKER: Well, but that’s exactly to my point. You had a Democratic district attorney spend almost three years looking at every single one of those communications, interviewing people, talking to people and closed the case.

WALLACE: Did you have your own private e-mail account?

WALKER: It’s one of those where I point out district attorney has reviewed every single one of these issues.

WALLACE: But sir, you’re not answering my question.

WALKER: No, because I’m not going to get into 27,000 different pieces of information.

Maybe Walker can be forgiven for thinking his deflection would be accepted in the friendly confines of Fox, but his dodges were so artless they offended Wallace. Beltway pundits may have declared Walker’s troubles a “snooze,” but Chris Wallace wasn’t snoozing on Sunday.

Still, Walker had a better weekend than his 2016 rival Chris Christie. Although the New Jersey governor has ignored the suggestion that he step down as chair of the Republican Governors Association until his bridge troubles are resolved, he kept an unusually low profile as the nation’s governors gathered in Washington this weekend. He only appeared at a couple of official events, seeming “uncharacteristically quite and reserved,” according to Time magazine, and he ditched the media the whole weekend, as he has since his two-hour pity party/press conference over a month ago.

Christie didn’t attend either Sunday night’s White House dinner or Monday’s meeting with the president. Louisiana Gov. Bobby Jindal was slated to lead the Republican delegation visiting Obama as well as the closing press conference. Jindal's own 2016 hopes have been dashed by his unpopularity in Louisiana, but maybe that's a sign of Bobbymentum.

So far I’d have to say that Walker is surviving his scandal with more aplomb than Christie, but it’s not over. That other John Doe investigation, into whether Walker’s recall campaign illegally coordinated with outside right-wing groups that flooded the state with money, continues. Reporters and Democratic operatives continue to delve into those 27,000 documents released last week. Walker is brazenly asserting that voters have no right to know more about his staff’s secret email system or other oddities in the new emails, including the racism of his top aides. He seems to think that “unindicted” is the same as “unscathed.” But most people have higher standards than that for their governor and their president.