The Latin American revolution will not be televised 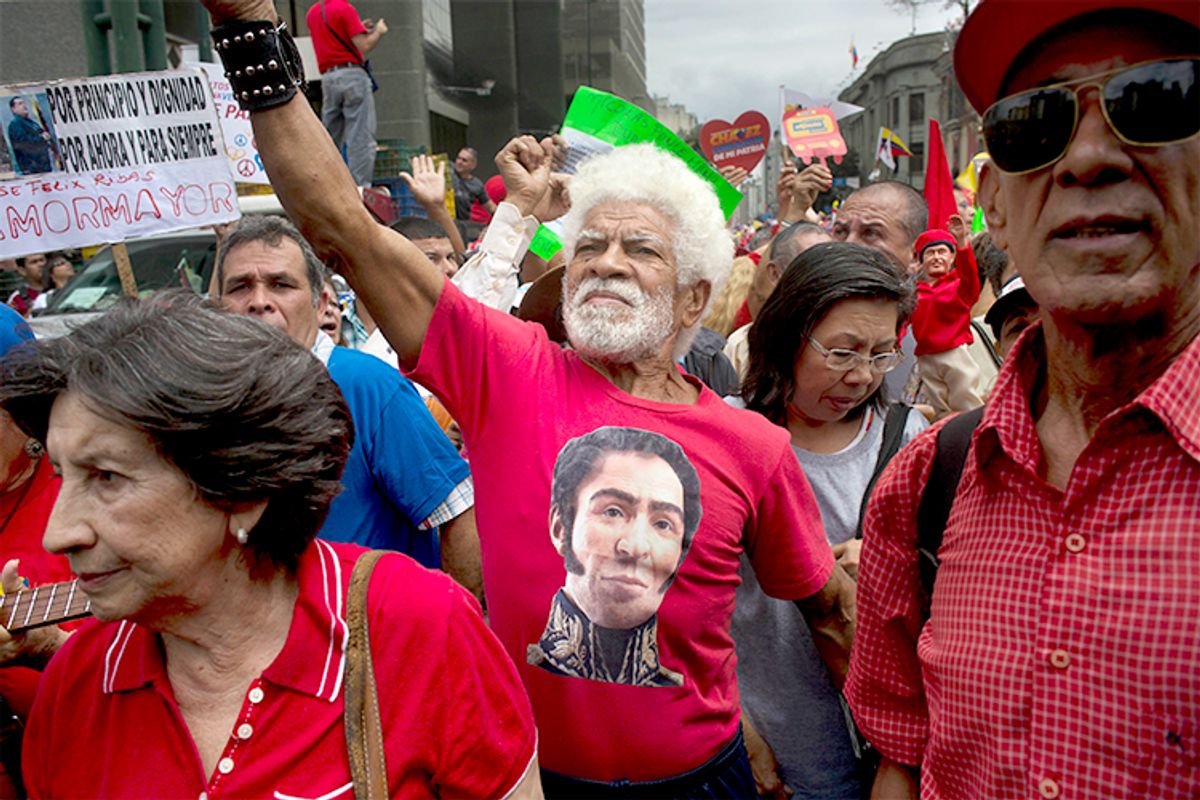 I spent my 30th birthday booking flights to Brazil. I couldn’t wait to arrive in Rio de Janeiro, and had dozens of daydreams about running on the beach, the waves crashing against my lithe body as I frolicked across the sand. But that’s not actually a great interpretation of the trip, my body or Rio. You see, I landed in the middle of an attempted coup, the basis of which was explained to me by my cab driver, a helpful fellow who kept chanting, “one moment please,” as he took a speaking break to figure out the words he wanted to communicate in self-taught English. From the airport all the way to Copacabana, I was entertained with an honest look into local politics, courtesy of a native.

“We are planning for tomorrow. It is going to be the biggest demonstration ever in Brazil.”

He switched topics briefly to ask about America. He’d been saving money from every paycheck to try to take his family to the states.

“We save and we save ... and they build more stadiums.”

My driver, like many citizens, was unhappy with the government decision to focus on tourism dollars for the 2014 FIFA World Cup and 2016 Summer Olympics in Rio rather than on hospitals, schools and public works programs. I was captivated by his candor, enough so that I gave him an American-size tip. I listened to his goodbyes as I climbed out of his tiny car and walked up Rua Barao de Ipanema, past the beach and to my adopted home. I walked to my apartment just in time to greet my host as she hurried out the door to a meeting, leaving me with her son and his colleagues, who were filming for what I later learned is one of the most popular YouTube shows in Brazil. When the scene is complete, we perch on stools in her small kitchen, sipping strong coffee from porcelain cups, and talk in a stilted Portuguese/English mix about online videos, Twitter and Facebook. Brazil is one of the largest growing casual users of the mobile Web and they are very smart about online video. The boys warn me against taking the train in the morning. They spit out names and reasons I couldn't follow in my basic interpretation of their language, but there's excitement in the warning. "Stay away from Downtown," they say with pride creeping into the upturned corners of their mouths.

The following morning I learned that most of the country had taken off for a national day of protest, the largest in Brazilian history, leaving many storefronts closed, bus stations unattended, and businesses shuttered for the day. I checked the Rio section of the online social community Reddit, /r/riodejaneiro, and found a few posts about the protest my friend the cab driver had mentioned. From there, I was able to search for a few reliable news sources -- the main news organizations of the country were not to be trusted to accurately display the protests, according to my host's son -- and the hashtags being used for organizing activists on Facebook, Instagram, Vine and Twitter. Following #ProtestoRJ on Twitter, I quickly learned which trains in Rio were no longer running, and where groups were gathering. I learned about the proposed rise in bus fares, and the unsafe conditions on transportation, including accidents and curb jumping. I also learned about labor groups and their cries of unsafe working conditions. Photos of broken glass on storefront windows, and injuries from rubber bullets replaced baby pictures and food photos on my Facebook feed, now that I had searched for #ProtestoSP, the hashtag of organization in Sao Paulo. The entire country was angry for a million different reasons, and were all, it seemed, airing their grievances live on social media.

Over the next few days, the country went back to work but the protests continued. I was able to maneuver around Rio, staying on the fringes of the fighting, and booking bus tickets to head further north. The riots continued, but numbers dwindled compared to previous days, and most of the coverage shifted completely to social networks, heavily featuring videos of police brutality by a group of rogue journalists called Midia NINJA, or Independent Journalism and Action Narratives. NINJA's Livestreams kept the action alive, and reminded isolated groups of protesters that others were out there, too.

Up north, in Itaunas, it was much quieter, and I participated in the Forro de Itaunas festival, one long week of dancing on a warm beach. I ate fresh fish and slept in hammocks, and eventually, regrettably, flew back to New York, but was able to follow the ongoing strife on social back channels. A governor had abused financial privileges, a man from the fevelas had disappeared after speaking with police, and World Cup work was causing clashes every day, but no one in the U.S. was covering the story any more. Life outside of Brazil had moved on.

Last week, a handful of my expat friends began sending panicked tweets out of Caracas. Photos and videos that had been posted to Twitter were disappearing, they said. Tweets weren't publishing. Wi-Fi connections had problems. After some Internet detective work, several social media users connected the dots to CANTV, a Venezuelan TV and Internet service provider of over 10 million mobile subscribers, that was renationalized in 2007. Any images, videos or avatars that were being used to encourage or shed light on the ongoing protests were taken offline, although many benign images and text messaging-like mobile apps were also affected. And with that mighty outcry at the possibility of having communication ripped from their hands, the Western world got their first major glimpse into the current reigning conflict in Venezuela.

Political drama is nothing new to Venezuela. Indeed, President Nicolas Maduro has followed in his friend Hugo Chavez's footsteps of claiming assassination attempts, crying wolf on localized terrorism and is often held responsible for overall inflation throughout his tenure. But the gatherings of the last month have held more power than is typically felt by student movements, and has led to a fast-moving chain of events within the government, including detaining opposition leader Leopoldo Lopez on terrorism charges, with Maduro comparing the opposition to an infection. Lopez, who may have organized some of the larger gatherings, was formerly charged with murder in connection with the deaths of three protesters, but the charges have since been reduced to arson and conspiracy. His detainment, as well as government speculation that the United States is spearheading a movement to destabilize the Venezuelan government, drew the attention of Amnesty International, which accused Venezuelan officials of "scapegoating." Similarly, following the story on international news outlets has been confusing, as the information being received depends largely on which network you decide to follow along with.

And while major networks are being threatened for glorifying anti-government gatherings, falling silent, or are expelled from the country altogether, there is major dialogue forcing through on social media.

In the past 30 days, social media measurement tool Topsy.com has captured more than 18 million tweets mentioning Venezuela, and almost 900,000 referencing Nicolas Maduro alone. Opposition token Leopoldo Lopez has earned 2.4 million Twitter followers, and a photo of injured protesters and police violence tweeted by actor Jared Leto was shared 25,122 times. On Feb. 13, BuzzFeed, darling of the viral Web, wrote a post highlighting social media users who had their images blacked out. The post earned 1,500 Facebook likes. Hashtags like "#VZLAUNIDACONTRAELFASCISMO" and "#SOSVENEZUELA" show both heated discussions between conflicting sides and information on gatherings. They also highlight the problems of independent media in their attempts to cover the developing story. A Google image search of those terms reveals Photoshopped images of police brutality and government officials with the words "fascista," or "fascist." CNN's user-generated news system, iReport, claims to have received 2,700 reports from Venezuela, with 120 of them verified.

According to the Venezuelan embassy in D.C., cellphone use is up over 100 percent, meaning there are more cellphones than citizens in the country, and Venezuelans sent over 59 million text messages in 2012. With such stunning mobile user growth, and a protester base of student activist groups, one would expect a certain amount of information share on social channels, but in the case of Venezuela, it seems that almost all the information leaving, and entering, the country is coming from these grass-roots methods. It's a reminder of my time in Brazil and the lack of coverage in the Western world during those protests. Scanning the pages, channels and websites of the major information sharing networks, the uprising in the Ukraine has taken center stage and Venezuela is reduced to a side note.

So, what is it about certain regions that attract coverage in the U.S. while others are relegated to DIY sharing? Is the conflict in Kiev so devastating that we can't peel our eyes away, or are we captivated because of the ties to the problems of Sochi and deep-seated U.S. hatred of all things USSR?

Have we simply come to expect conflict in Latin American countries, and so, don't bat an eyelash or lean a click toward headlines about such issues? Or, thanks to independent reporting on the Arab Spring, have we come to utilize social media as a legitimate news feed, satisfying our want for intelligence where this story is concerned? If so, is there a danger in becoming too dependent on unverified media, or perhaps becoming too desensitized to raw images and live streams of killings? Will we eventually look away?

Whatever the reason, it seems evident that some revolutions will never make it past the Web barrier, while others will demand every ounce of attention that we have and feature prominently on the evening news. Social media brings us a lot of fluff, a lot of pomp-and-circumstance and too much information we feel we don't need. However, it also makes the world considerably smaller, creating a human connection between the graphic images we view on the news and the people who are affected. While my smartphone pings with headlines from Sao Paulo, Caracas, Istanbul, Kiev and Sochi, I wonder if we will soon see a day when we can renounce the clutter, broadcast where necessary, and combine these channels to truly activate the visions of change happening around the globe.