The new opiate of the masses: Netflix

A deal with Comcast has net neutrality fans raging, but do video streaming consumers even care? 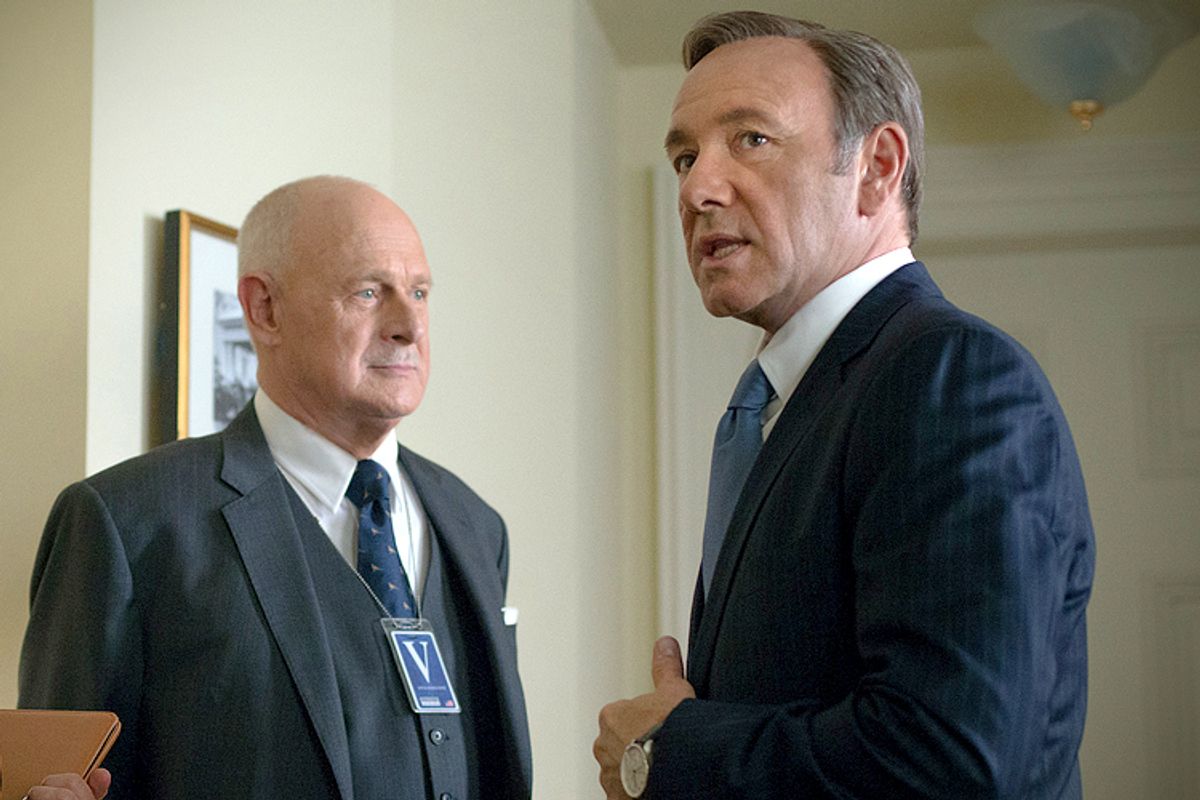 As a Comcast subscriber who spent a good portion of the past 48 hours binge-watching the second season of Netflix's "House of Cards," I feel like I am personally responsible for the weekend's big Internet infrastructure news: the deal in which Netflix will pay Comcast to directly connect Netflix traffic to Comcast's Internet pipes. My addiction to quality streaming video is what this story is all about! And now that there are no more episodes left to watch, I'm left facing an uncomfortable question. What do I care more about: the future of the Internet or being able to watch Kevin Spacey and Robin Wright without buffering or screen freezes?

The spectacle of a content provider like Netflix paying for faster traffic is exactly the kind of thing that advocates of "net neutrality" have been warning about for years. The principle of net neutrality is that Internet Service Providers should not be able discriminate between different types of traffic -- thus giving the small and puny (and potentially politically controversial) a level playing field with the high and mighty.

When the D.C. Court of Appeals struck down FCC rules aiming to enforce net neutrality one month ago, the alarm bells started ringing louder. A few weeks later, when Comcast announced its plan to buy Time-Warner Cable, which would give the company control of  a vast swath of the nation's consumer broadband market, the hollering became deafening. And when the news broke of the Comcast-Netflix deal, half the Internet yelled, "I told you so."

It makes for a tidy package, but the truth is a good bit more complicated than a straight-out net neutrality violation. Good explanations of what is going on can be found here and here, but basically, the Netflix deal actually allows the streaming video colossus to avoid the crowded Internet infrastructure where everyone else is sending their traffic and instead cut straight through to Comcast's network. So-called paid peering arrangements are not uncommon. And when one source of content is responsible for an amazing 30 percent of Internet traffic during prime time, it's not surprising that one-to-one arrangements would be made between the relevant market players. That's a lot of traffic.

But whether what's happening really qualifies as a net neutrality violation is moot. Comcast's proposed Time-Warner buyout will give it enormous leverage over content providers of all kinds. Monopoly or quasi-monopoly power over broadband access could easily lead to Comcast charging higher and higher prices to the Netflixes of the world, and those costs will inevitably get passed on to consumers. Does it even bear mentioning that Comcast's own On Demand service is a direct competitor to Netflix? How Comcast will resist the obvious conflicts of interest involved here is difficult to see.

But will the people care? For Comcast Internet subscribers, the result of the Netflix deal will be a higher quality of Netflix experience. That hardly seems like an insubstantial consideration. I'm not aware of polling data on this issue, but I will guess that there are far more Americans who get highly irritated at Netflix buffering than who care about "net neutrality" or monopoly telecom consolidation. That's a constituency not to be trifled with. Suppose the FCC took steps that screwed up our streaming? Can you imagine what Kevin Spacey's "Francis Underwood" would do with something like that? Impeachment proceedings would be started before you got to the 10 percent buffering sign.

The Netflix-Comcast story is important because it so dramatically illustrates what is at stake along with how difficult it will be to craft a policy response. Serving the appetite of consumers and serving the general welfare not only do not necessarily coincide but can actually work at cross purposes to each other.

It is discomfiting to be in the middle of this story. I recently moved back into my house and had to set up Internet access. I wanted to go back to my local independent ISP, Sonic.net, with whom I had been a loyal customer for more than a decade. But when I researched bandwidth, I discovered that Comcast was providing speeds almost three times as fast for essentially the same price. And in a house with a teenage gamer who may be watching one Netflix show on his laptop while I’m watching another in the family room, lots of bandwidth makes a big difference. As a consumer, I felt like I had no choice, even though politically I rue every minute spent in vassalage  to the largest cable company in the U.S.

And to be completely honest, I've been very happy with the quality of my streaming lately. So much so that I hardly noticed the big Netflix news of the weekend because I was so entranced by "House of Cards." Video streaming is the new opiate of the masses.

A helpless nation, drugged by online HD video streaming. Could there be a better demonstration of why we need more competition and not less, in the provision of our Internet access?