Why the mainstream media fails writers of color 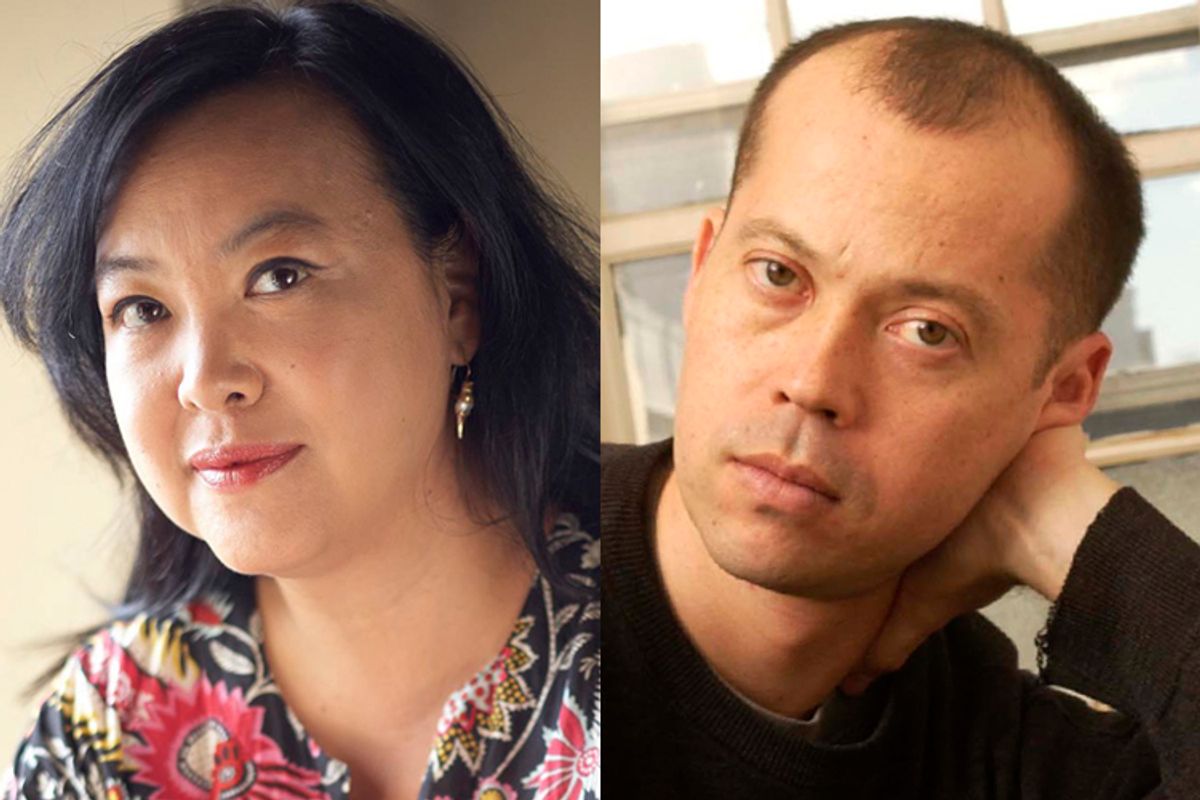 In 2003, before my first book came out, friends in the literary community warned me about how dire review coverage had become.

But no one I worked with at St. Martin’s Press on We Should Never Meet, a collection of short stories that involve “Operation Babylift” in Vietnam and its aftermath, ever mentioned that my ethnicity might play a role. Even now, it’s hard to imagine anyone in the publishing industry trying to explain the political murkiness and cold marketing statistics of landing book reviews to an elated debut author like me.

Few people read literary fiction, and those who do typically turn to critics to discover which books deserve their time. But if those critics are to be believed, few writers of color make the cut. According to rough counts for 2011 to 2012 compiled by writer and teacher Roxane Gay and a graduate assistant, 90 percent of the books reviewed by the New York Times during that time period were by white writers, leaving a 10 percent sliver for writers of color.

These depressing estimates, first published in the Rumpus in 2012, confirm what many writers of color like me have always feared: that the words over which we’ve labored and sacrificed ourselves for years—the books we’ve written, revised, edited, and finally published in order to contribute to the literary landscape that’s inspired us—don’t matter to the influential gatekeepers of the reading population.

If mainstream critics, who are supposedly curating and recommending the most notable works of contemporary literature, aren’t paying attention to us, then who will know how to read us? While some readers may bristle at the idea of critics telling them how to read, authors of color know all too well the amount of interpretation required for their work to become accepted by mainstream audiences.

For some writers of color, the uniqueness of their background can result in better coverage. Cristina Henriquez, whose novel The Book of Unknown Americans will be published by Knopf this summer, told me in a recent phone conversation that she received generous reviews for her two previous books. Those critics, she added, seemed sincerely interested in her Panamanian subject matter.

Yet, writers who share an ethnicity with other well-known authors (Chinese American writers will always have the Amy Tan question to contend with), often end up competing with each other. I’ve heard writers complain about editors passing on certain manuscripts because “they already have a Korean book on their list.” If this kind of bean counting is occurring—and I think it is—the same attitude carries over to many of the elite literary magazines, which rarely publish more than one or two authors of color an issue.

We writers are not supposed to gripe about the number of reviews we get. We’re simply supposed to appear grateful for any attention in this glutted market. But after seeing Gay’s alarming numbers, I couldn’t help wondering if my subject matter—the Vietnamese diaspora—could have affected the coverage I received.

For We Should Never Meet, that coverage was modest but respectable, especially for a debut work, with reviews in several major newspapers and trade publications. By 2012, when my second book The Reeducation of Cherry Truong was published, most of the coverage appeared in trade publications, book blogs, and online magazines—a sign of the changing terrain for book reviews.

Still, I’m curious about what book review editors were thinking as they considered my galleys. Did the editors assume my appeal would only be limited to my community or those who already had an interest in Vietnam? That possibility disheartened me. Like most writers, I hope that readers will still want to invest in a good story, engaging characters, and beautiful prose regardless of subject matter.

What’s preventing books by authors of color from being picked up and assigned to a reviewer? While it would be easy to assume editors are lazy or uninterested, the answer probably has much more to do with fear.

As a creative writing teacher at an arts college in San Francisco, one of my most challenging and rewarding classes is Asian American literature. My students of color often relish the readings, but some white students say they feel anxious about discussing unfamiliar cultures. They don’t know how to speak about the topics with any depth, they tell me, and are afraid of saying something politically incorrect.

In short, they’re scared to talk about race.

I understand this uncomfortable silence well: It’s what I and many other writers of color have experienced in creative writing workshops, when our professors and classmates fumbled with giving feedback to us. So, the reluctance to evaluate work by authors of color may begin early for many white critics.

I spend weeks coaxing my students out of such insecurities, assuring them they can approach the subject matter with careful reading. I explain that characters in novels such as No-No Boy by John Okada and Blu’s Hanging by Lois-ann Yamanaka, whose ancestors may have been born in different countries, share many traits that are part of the human experience. I argue that it’s through critical analyses that Asian American literature—and any literature of color—can create understanding and empathy across ethnic lines.

Of course, writers of color are not responsible for promoting cultural awareness through their works. Within any ethnic literature, there’s a broad range of writers who experiment with form and subject matter. While my sources of inspiration do happen to share my ethnic makeup, other Vietnamese American authors write plenty of stories and novels that have nothing to do with their race. But if their characters don’t share their skin color, those authors are often questioned for their audacity in doing what white writers have done for centuries.

When Monique Truong published her second novel Bitter in the Mouth (Random House, 2010), the book’s official synopsis contained no mention of the protagonist’s racial identity—a crucial reveal in the plot. This clearly confounded some book critics, including Roy Hoffman from the New York Times Book Review, who spoiled this information in his opening paragraph:

It seems only fitting, 50 years after the publication of ‘To Kill a Mockingbird,’ that a Vietnamese-born author who came of age in the United States has written a Southern novel with an Asian-American protagonist who likes to cite Harper Lee.

This reviewer fails to recognize that such a disclosure will significantly alter the reader’s experience of the work. Instead of respecting Truong’s attempt to challenge preconceived notions of identity and the tensions of growing up in the American South, he clearly felt the need to assure readers that this author wouldn’t dare to write a Southern novel with a protagonist of another race than her own.

More recently, Bill Cheng published his first novel Southern Cross the Dog(HarperCollins, 2013). The review by Dwight Garner in the New York Times cited Cheng’s lack of experience in its headline: “Imagining a Past That Isn’t His Own.” By the second paragraph, Garner points out his young age and ethnicity:

The blues in American fiction is a strong spice, easily overused. It’s worrisome too that ‘Southern Cross the Dog’ is set in Jim Crow-era Mississippi and is mostly about the lives of black men and women. Mr. Cheng is a 29-year-old Chinese-American from Queens. Until this month he’d never set foot in Mississippi.

After such reviews, ALIST Magazine columnist Matthew Salesses and Kartika Reviewfiction editor Christine Lee Zilka engaged in a thoughtful discussion with Cheng about the critical reception of his first novel. This conversation, which appeared inALIST last August, highlights the issues many writers of color grapple with in navigating the public response to their work. For instance, when asked what he hoped his work would do for “APIA [Asian Pacific Islander American] literature,” Cheng said:

[N]othing specific to APIA literature. As a whole, I want writing to be better. I want it to be important and outward looking. I want literature to plumb not just the easy truths, but the hard ones. I want American writers to recognize that their work exists on a world stage. I want us to challenge ourselves, to grow.

And as for other Asian-American writers? My father once told me that words like chink and gook and chinaman are only hurtful if you give credence to those words. If you let it define you. If you believe in some way that you are a chink or a gook. Your days of letting people tell you what you are and what you aren’t are over. Write what you want, and don’t apologize for it.

Cheng, Salesses, and Zilka all offer smart, if differing, suggestions for addressing the lack of diversity in book reviews. ALIST Magazine, whose website states that it’s “dedicated to bringing mainstream attention and interest to Asian American leadership and excellence,” is a noteworthy example of the diverse media outlets that now provide a critical space for literature by authors of many backgrounds.

Other magazines like Hyphen, Diacritics, and Color Lines—along with a wide range of book blogs and literary arts organizations such as the Asian American Writers’ Workshop and Cave Canem—highlight writers of color who are often ignored by the mainstream media. Recently, Ron Hogan, founder of the literary site Beatrice (“introducing readers to writers since 1995”) and former senior editor of Galleycat, launched Beacon: A More Diverse Book Review.

But that doesn’t let other book review publications off the hook. Far from it. The majority of the reading public still consults the New York Times and similarly white-dominated bestseller lists for help with choosing which books to read—and buy.

Gay’s statistics have sparked responses in the Nation, Flavorwire, PolicyMic, and other outlets. Some editors have acknowledged the lack of diversity in their newsrooms and freelance contact lists. There’s an obvious solution: Hire diverse critics to write book reviews. Yet, this poses its own problems. It puts the responsibility for promoting the work of writers of color on other writers of color. And regardless, few authors of color are being asked to write reviews.

While Gay, Zadie Smith, and Alexander Chee have established themselves as critics who write about a wide range of topics, Truong has told me by email that, since the publication of her award-winning novel The Book of Salt more than ten years ago, she’s received only one invitation to review a book—and that was for a Chinese immigrant memoir. Henriquez also reported in our phone conversation that she’s never been solicited to write reviews, despite two acclaimed books to her name.

“We need reviewers,” Chee noted in an email exchange with me, “but we also need more book editors of color.... [T]he editor is where the message begins"— especially in meetings where new story ideas and assignments are discussed. "It's not that white editors can't do the job at all," Chee added, "but that our contributions to that launch meeting can make an important difference.”

Above all, Gay makes clear that white editors need to recognize this disparity and the importance and benefits of reading broadly. When I asked Gay by email recently about her plans for compiling a 2013 count, she said she isn’t sure she’ll have time this year. But Gay shouldn’t have to make the time. It’s not on her to be the only one watching, counting, and writing about literary racial inequality.

Writers of all colors and the literary organizations they support should band together to systemize a count, much as VIDA has done in tabulating the bad statistics for female authors. Once more of us are observing, tallying, and voicing our dissent, editors—as well as the reviewers they assign books to—will have to respond.

After all, we're their readers, too.

Aimee Phan (www.aimeephan.com) is the author of "The Reeducation of Cherry Truong" and "We Should Never Meet." Follow her at @aimeephan