14 protest videos that went viral and changed the world

From Iran's Green Revolution to Occupy Wall Street, scenes of brutality have altered the course of recent history 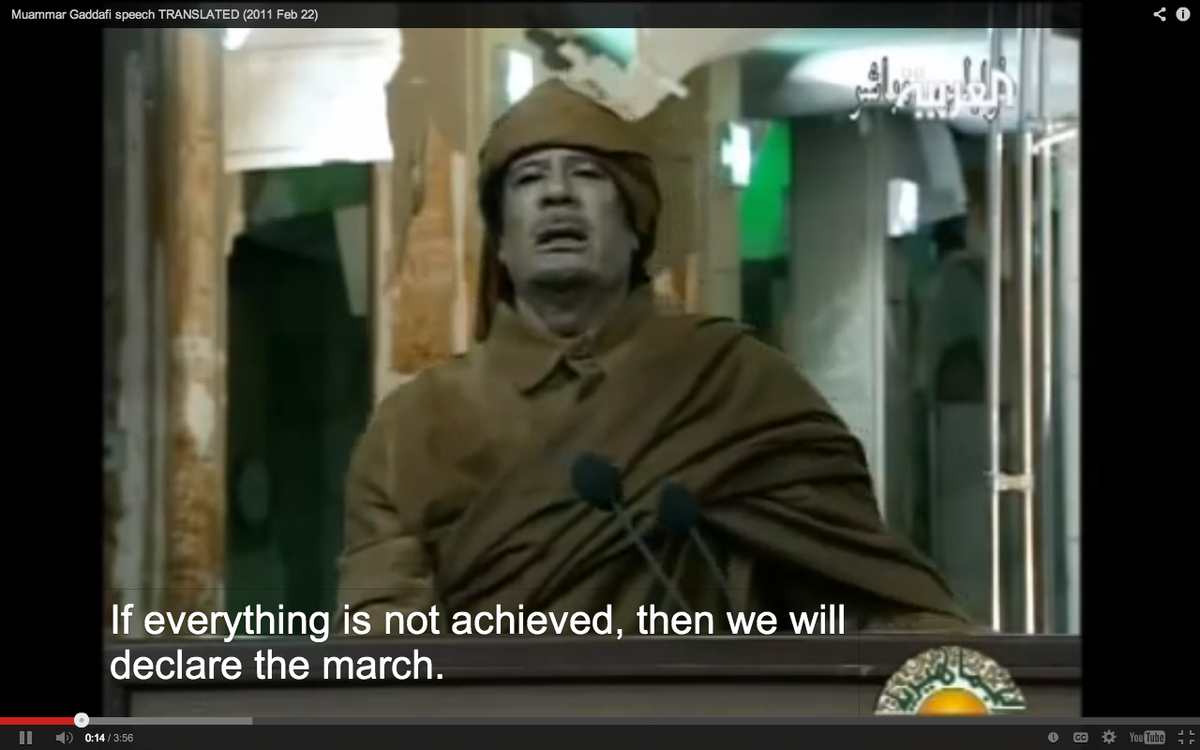 Social media have played a direct role in recent civil uprisings around the world. The videos below galvanized movements. They captured the world's attention. They changed history.

It might be too early to know which images and video footage will define the present uprisings in Ukraine and Venezuela or Thailand. But the videos below defined recent uprisings in Iran, Bahrain, Egypt, Libya, Montreal, Syria, and elsewhere around the world.

Some are graphic and disturbing. Others are inspiring and beautiful. All of them made a difference.

(WARNING: some of the videos are very, very graphic. Skip to No. 9 for videos that are relatively non-violent.)

Iranians rose up after presidential elections in 2009, when then-President Mahmoud Ahmadinejad defeated opposition candidates Mir-Hossein Mousavi and Mehdi Karroubi amid claims of vote manipulation and election rigging. The resulting protests became known as the Green Revolution or the Persian Awakening. Nedā Āghā-Soltān, 26, was shot in the heart by a Basij militia member while en route to join the protests. She immediately became a symbol of the uprising.

As we know now, the ouster of former Egyptian President Hosni Mubarak was just the beginning of the Egyptian Revolution. In December of 2011, protesters in Tahrir Square, Cairo were demanding that the Egyptian military cede control of the country to a civilian administration. Amid the demonstrations, military police seized a young woman, beat her unconscious, dragged her through the street, and stripped her of her abaya. The video ignited more protests against the military regime and raised global attention to the place of women in the new Egypt.

Hamza al-Khateeb, 13, was detained, tortured, and killed by Syrian government forces in the early stages of the civilian uprising that turned into the present civil war. His family filmed his disfigured body and distributed the video to the press. It quickly went viral, sparking demonstrations across the country.

Early in Bahrain’s protest movement — which began in 2011 and has simmered ever since despite violent crackdowns by security forces — government forces shot live ammunition into a crowd of demonstrators marching peacefully down a street. More than 2 million hits on YouTube to date.

In late February 2011, less than a week after the Libyan uprising began, Libyan leader Muammar Gaddafi gave a speech in which he promised to retake the rebellious city of Benghazi, “inch by inch, home by home, alleyway by alleyway.” It became known as the “zenga zenga” (“alleyway by alleyway”) speech. Those threats prompted the United Nations to support a NATO-enforced no-fly zone, which soon led to direct intervention and Gaddafi’s death.

NYPD officers surround a group of women, pen them in using a plastic fence, and pepper-spray them. This was at the heigh of the 2011 Occupy Wall Street protest movement in theUnited States, which began in Manhattan and spread across the country.

Less than a month after the pepper spray incident in Manhattan, a university police officer at the University of California, Davis (a public university) pepper-sprays a line of seated, peaceful student protesters. The two videos went viral and helped galvanize the protest movement, which mainted permanent camps in some cities for months.

In 2012, students in Montreal were protesting a 75 percent increase in state university tuition. Violence between protesters and the police led to fires, rioting, mass arrests, and injuries. A teacher, François-Olivier Chené, wanted to find a way to ease tensions. This video is what he came up with.

“Everyday I’m capuling” became a rallying cry for anti-government protesters demanding the resignation of Prime Minister Recep Tayyip Erdogan. “Capuling,” which means “raging” or “pillaging,” was a response to Erdogan, who had called the protesters "looters."

Erdem Gunduz became known as the “standing man” after he started a silent protest in Istanbul's Taksim Square.

Hisham Fageeh, who describes himself as a Saudi activist, rewrote Bob Marley’s “No Woman, No Cry” to call attention to Saudi Arabia’s ban on women driving. It worked.

Manal al-Sharif, a 32-year-old IT consultant in Saudi Arabia, protested the driving ban with a more direct approach: she got behind the wheel, illegally drove around, and posted the video on the Internet.

In the ongoing saga of change in Egypt: A 12-year-old boy speaks out against Mohammed Morsi and the Muslim Brotherhood. “We didn’t get rid of a military regime to replace it with a fascist theocracy."