The best thing about Seth Meyers on "Late Night": His funny friends 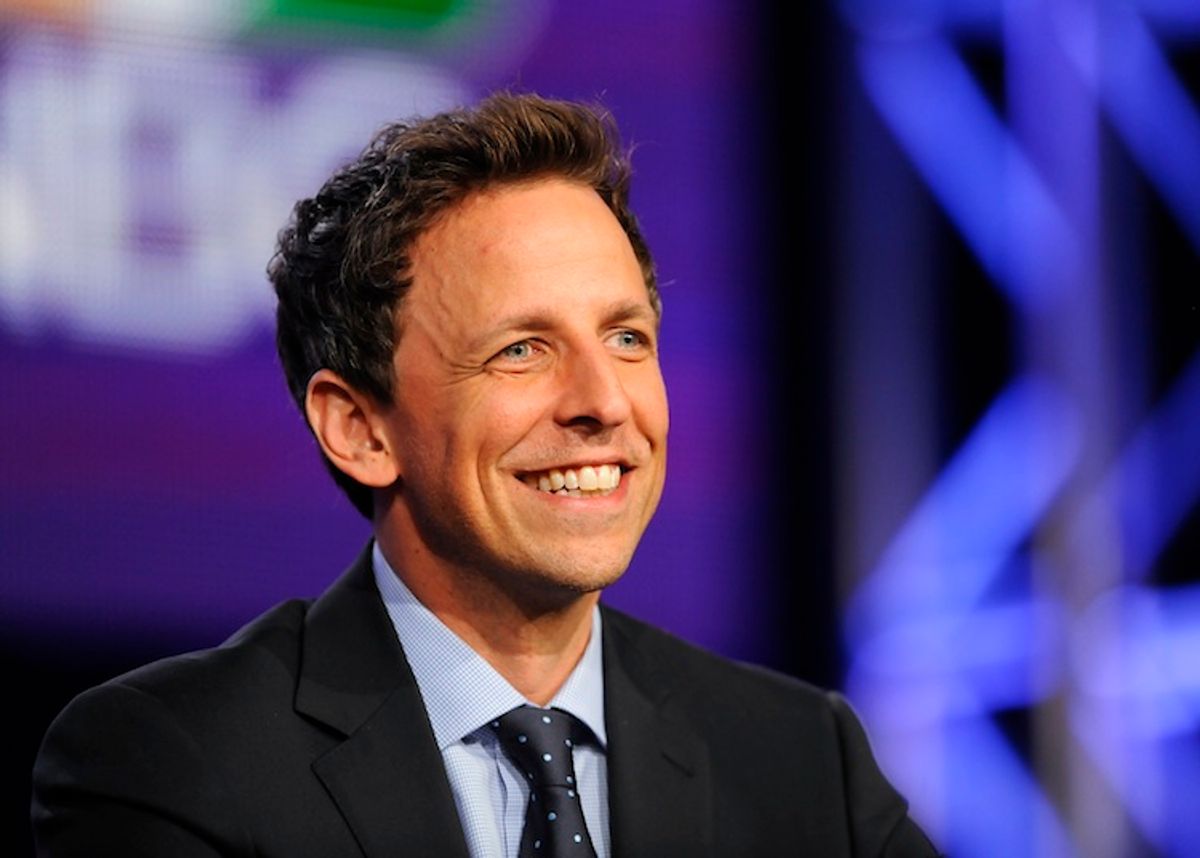 Some time after midnight, during his inaugural monologue as the host of “Late Night,” Seth Meyers openly admitted defeat at the hands of a joke.  “All right, our first bomb,” said Meyers, grinning mischievously, after the audience responded to a bit about a congressman masquerading as a UPS driver with meager laughter and only a smattering of applause, “I’ll take it. I’ll take it.”

I figure the concession was only a gambit on Meyers’ part to demonstrate humility, since this was neither the first nor the last gag to garner a lukewarm reception. Seconds later, after the audience either missed or simply didn’t care for his punch line regarding the man who found a rat in his store-bought cake, Meyers hammered it home unnecessarily because, he said, “I really like that joke.” Soon after, he held the audience’s gaze an extra beat to make sure they reacted satisfactorily to an easy Taco Bell jab.

It’s a thing Seth Meyers does and has done since he took over the Weekend Update anchor desk on “Saturday Night Live.” He likes the jokes he writes. He likes the jokes his writers write. So, he waits. Some might say he milks the moment. He’s certainly not the first comic to do this, but the tactic works particularly well for Meyers because, well, often he really comes across as an eager teenager desperate to make everyone laugh together. Even if the bit is half-baked – or overwrought like the Venn diagram routine that followed the monologue – you don’t want to deprive him of that.

In general, the new “Late Night’s” written stuff was uneven. (One day after the Olympic closing ceremonies, Sochi humor already feels way stale.) Meyers seemed a little uneasy on his feet and better behind a desk. The best moments were those in which he seemed most at home, including – naturally – riffing with friends and fellow "SNL" players Fred Armisen and Amy Poehler. Poehler’s appearance as his first guest was clearly intended to ease Meyers’ transition into the role of true interviewer and not just the guy who feeds lines to Stefon. Poehler even stuck around as her former co-anchor softballed Joe Biden, bringing to bear their familiarity from the vice president’s previous appearance on her show “Parks and Recreation.”

Judging from the mileage he and Meyers eked out of tossed off references to the History Channel, Fred Armisen’s presence as Meyers’ bandleader might be the most promising thing about this incarnation of the talk show. If Questlove’s deadpan can double Jimmy Fallon’s worth, imagine the spin a seasoned comedian-slash-weirdo like Fred Armisen can put on the old host/bandleader banter protocol. Hell, if I had my druthers, the "Portlandia" frontman would most certainly resurrect Nick Fehn for “Late Night.”

I like Seth Meyers. I am among those who frequently wished that Weekend Update would go on a couple minutes longer with him behind the desk. I like that he brings a writers’ room, just tryin’ shit out aesthetic to his new dominion. But the late night talk show arena is crowded with plenty more polished product. Dave Letterman did the rough-hewn thing to perfection years ago. And even Craig Ferguson’s controlled chaos is somehow more refined than what Meyers trotted out last night. As far as I’m concerned, there’s room for everybody. So, hopefully, Seth Meyers will hit his stride soon enough. In the meantime, he’s got funny friends, a great lead-in from Fallon, and a wicked smile that promises, "Wait, there’s more."