The right's ugly food-stamp obsession is back! Why lying dog-whistle politics returned

Cheney says Obama prizes SNAP over the military, while Fox claims slackers use food stamps on strippers. Here's why 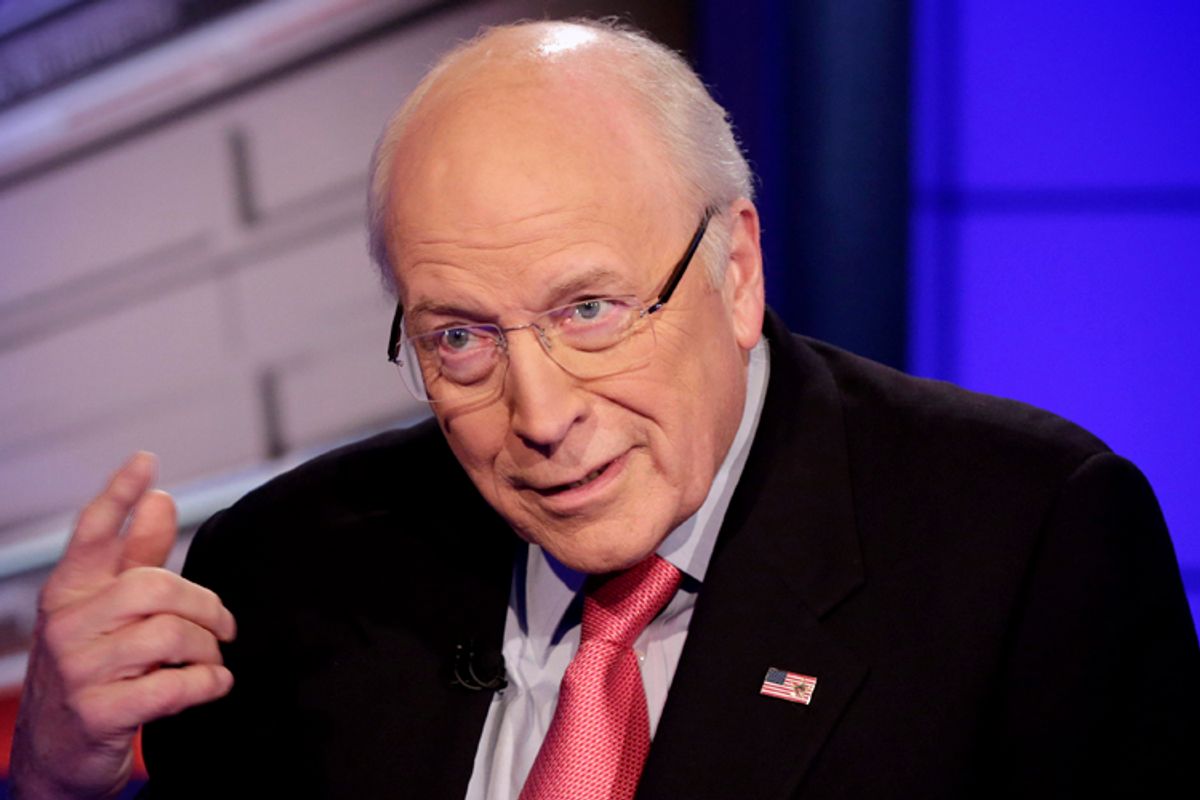 “He's playing the system, he's stretching the rules to their limits,” Bolling told Fox’s angry, fearful, mostly elderly viewers. “But what would you expect with a $105 billion program that's almost tripled under Obamanomics? That's what you would expect, right there, take a look at it. But what's next? Strip clubs, liquor stores, pot dispensaries? Oh, that's already going on, folks. Welcome to Obama's America.”

Bolling’s rant came a day after Dick Cheney visited Fox and attacked Defense Secretary Chuck Hagel’s military cuts, telling Sean Hannity, bizarrely, that Obama “would much rather spend the money on food stamps than he would on a strong military or support for our troops.”

The right just can’t leave that old dog-whistle alone. It’s 2012 all over again – Newt Gingrich will be reviving his claim that Obama’s “the food stamp president” any minute now. In “Obama’s America,” the right is determined to make the president the tribune of a moocher-rewarding, ever-expanding welfare state, even if they have to lie to do so.

Of course in Obama’s America (and everyone else’s) SNAP regulations prohibit buying alcohol or tobacco with food stamps, let alone drugs, and they can’t be used at restaurants or bars, let alone strip clubs. But Bolling wants Fox viewers in a perpetual state of moral panic, and the notion that slackers like Greenslate are “livin’ large” – Fox’s term -- on the public dime just works, the facts be damned.

Cheney’s rant was in some ways more offensive. Charging that the cuts proposed by Defense Secretary Chuck Hagel are “really devastating,” Cheney went on: “It does enormous long-term damage to our military. They act as though it is like highway spending and you can turn it on and off. The fact of the matter is he is having a huge impact on the ability of future presidents to deal with future crises that are bound to arise.”

Of course, as Think Progress noted back when Cheney began lobbying against defense cuts in 2012, the former vice president himself presided over a 25 percent cut to the defense budget back when he was defense secretary under George H.W. Bush. The fighting force was reduced by 500,000 active-duty soldiers, a move that was blessed by Joint Chiefs of Staff chair Colin Powell.

That was then. These cuts are the work of Obama’s team. So not only must they be attacked as dangerous, they’ve got to be framed as something the corrupt Chicago “gangster” is doing to reward his coalition of slackers, moochers and lazy white surfers.

In fact only 1 percent of SNAP funds are wasted in fraud. Three-quarters of SNAP households include an elderly or disabled person or a child, and fully 42 percent of adult recipients are also working, but making too little to feed themselves and their families. Among the nation’s food stamp recipients are almost a million military veterans, who were slurred by Cheney, and thousands of active duty military too. Military families spent $100 million in food stamp funds at military grocery stores in 2013.

Fox and Cheney don’t want you to think about the veteran or the soldier or the single mother or the disabled senior on food stamps. They don’t want Fox viewers to ask why 42 percent of recipients make such low wages that they qualify for food assistance, or why so many veterans and even active-duty soldiers need help. To distract from an economy that’s increasingly hoarding rewards at the top, they point to a cartoonish moocher and blame Obama.