Green Swag: Play-Doh for grown-ups who want to fix things

Can a "magic" putty give broken things a second life? 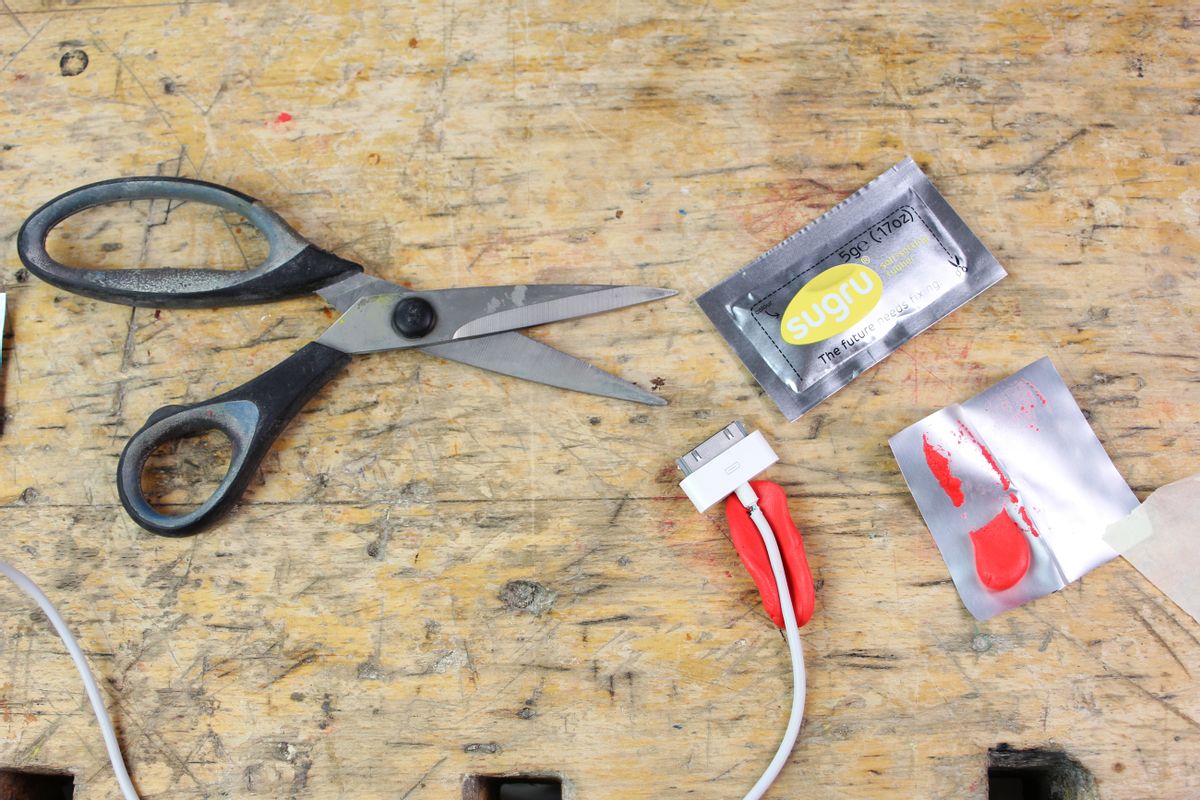 One of the most significant attributes separating humans from the rest of the animals (aside from the scale of destruction of which we’re capable) is our ability to use tools.

It’s one of those things that go way back to our origins as a species: Tools enabled us to hunt and cook, to build shelters, settlements and, eventually, cities. Fast-forward a few million years and you'll find me, confronted with a wonderful-but-kind-of-shabby new apartment filled with things that don’t quite work, and entirely at a loss as to what to do about it.

At some point in modern history, a popular narrative goes, we forgot how to make things for ourselves. Even worse, we forgot how to fix the things we’ve already got. Enter sugru: a moldable, pliable putty that promises to make fixing simple again. Sugru comes in small vacuum-packed sleeves of funky-smelling clay, in primary colors that reinforce its resemblance to Play-Doh. Also like Play-Doh, it hardens when left alone. In this case, though, that's exactly the point, as it transforms into a durable silicone rubber that adheres to most surfaces. It’s intended to make repairs, plug gaps, cushion rough edges and generally make old, broken things new again.

“It’s just really frustrating to see so much waste being created,” says Jane Ní Dhulchaointigh, who created sugru in a lab and is now its tireless spokesperson. We live in a world, she explained to me, where if one small part of a refrigerator breaks, we then have to go out and buy an entire new one. In a nutshell, her philosophy sounds something like this:

The world is filled with a lot of crap. Sugru is the stuff that can be called in to improve it.

Of course, nothing is ever that easy. My very first pack of sugru, due to some unfortunate packaging flaw, was already dried out when I opened it. The second I awkwardly molded into a lumpy blue bumper to cover the jagged, broken mouth of a mason jar. (Green Swag update: I'm still very into my mason jars.) It was inelegant, to say the least, but it erased the safety hazard posed by broken glass. Next, taking inspiration from the many projects listed on sugru’s website, I created two yellow (also lumpy) hooks and attached them to my wall an iPhone’s distance apart from one another, figuring they could be used to hold my phone while it charges at night. (Kind of like this.) When, after a day of curing, they seemed a bit too flimsy to trust, I used a third pack to reinforce them. I can’t call them attractive, but so far, they seem to work.

“So, what skill level do you recommend people have to use this stuff?” I asked Ní Dhulchaointigh, when we got together over Skype to talk sugru. By which I meant: Is it me, or is there a reason why my fixes aren’t coming out as polished as the projects I saw in pictures?

“It’s interesting that people who don’t make things regularly always sound a little nervous,” Ní Dhulchaointigh responded, sounding a bit sad for me. “It’s like drawing, or singing. A lot of people get in their heads that they’re not able to do these things, then they’re surprised when it takes a little time” to figure out.

It turns out, even though sugru is, per its fans, “science-fueled DIY magic,” it isn’t actually magic. Fixing things remains a skill. As Ní Dhulchaointigh characterized it, the putty appeals to the desires of people who “sit in their office all day and do stuff on the computer, and then have nothing to show for themselves" -- people who have discovered that being able to fix and create things is a valuable commodity.

So even with sugru, you do need to take the time and put some actual effort into fixing things. But it’s not impossible. “People are natural hackers, fixers and improvers. We’ve just gotten out of the habit of it,” Ní Dhulchaointigh explained. As a full-time office sitter who doesn’t always have much to show for my hours spent on the computer, I resolved to practice.

On Ní Dhulchaointigh’s suggestion, I decided to try something simpler. She proposed a number of small fixes: I could create little ridges on my hangers to keep my clothes from falling off (definitely a problem). I could pad the bottoms of mugs. I could buffer rattly things to quiet them down.

All great ideas, but I decided to go with the loose hinges on the paper towel holder above my kitchen sink. It had been driving me crazy: use anything but the gentlest tug to pull off a sheet, and the whole roll would go tumbling into the unwashed dishes. On my first attempt, I attempt to fashion a buffer of sorts to keep the hinge from swinging open, but it didn’t stick. On the second try, I went with what I now think of as the "bubble-gum method": I jammed the sugru into the hinge and spread it around. Once it cured, it stayed flexible enough for the hinge to still work. The paper towel hasn’t fallen off since.

I decided to save my last two packs for when a fix was really needed. But as I was writing up this review, I got a text message from my roommate informing us that a small, plastic part of our fridge was broken. Since getting an entire new fridge wasn't really an option, he proposed getting some duct tape to attempt to repair it.

My fix wasn’t perfect -- I still had trouble figuring out how best to place the sugru, and repeated visits to the fridge led to the shelf being knocked down while the sugru was setting, preventing it from holding fast. Having gone through my final two packs, I was forced to back up my fix with some duct tape after all. But the important part is that I was able to do it. After all, Ní Dhulchaointigh told me, part of the whole fixer ethos is accepting that things don’t look perfect.

That point was driven further home the very next morning, when our glass kitchen table went crashing to the floor, shattering into a thousand unfixable pieces. Even if I had some sugru left over, there are some things that no amount of the stuff can put back together. At least now I better understand the difference.

I should point out that sugru itself isn’t “green” as the term is typically defined. A synthetic rubber, it’s mostly formed from inorganic materials. And unlike something like a plastic water bottle, it’s nowhere near common enough for there to be an infrastructure in place for recycling it.

Even when my fixes failed, I definitely felt empowered just knowing I was equipped to try. As someone without a proper toolbox, I think Ron Swanson would be a little less disappointed in me now.

-- I wondered whether the bright, primary colors were supposed to be some sort of psychological trick to make people who shy away from the hardware store more confident in their fixer abilities. According to Ní Dhulchaointigh, though, they're more about fixer pride. "Repairing things shouldn’t be something we’re ashamed of,” she explained. Part of the spirit of it is being able to say ,"‘Yeah, I fixed it. That’s who I am.’"

She acknowledged, though, that such self-advertising might not be for everyone, which is why sugru also comes in white and black. You can also use this chart to blend the colors into a more nuanced shade.

-- Sugru is non-toxic, but it can cause skin irritation for extra-sensitive people. It's also not food-grade, so putting it on the lip of a jar I drink out of probably wasn't the best idea I ever had.

-- Sugru is still hard to find in the U.S., but it's already amassed a dedicated following. Lifehacker, the blog that caters to makers and fixers, has been singing its praises for years, and has come up with some really creative uses for it.

The creators of sugru wrote their own "Fixer Manifesto," which appeals to environmentalists (“If we double the life of our stuff, we halve what goes to landfill”) and libertarians (“fixing means freedom and independence”) alike. This should be one of those cases where not having to go out and buy something new, or pay for costly repairs, appeals to everyone.

The starter pack I was sent to try out came with eight pieces of sugru in different colors (seven of which were usable). It costs $18 online; if you choose to forgo the bright colors, it'll cost you $2 extra. If used wisely, the initial investment can be far less than the cost of professional repairs -- but it might take some practice before you get your money's worth.

Sugru makes it (relatively) easy to repair things that are expensive, or even seemingly impossible, to fix. Like most tools, its true power lies in what you decide to do with it.