Harriet the Spy: The most unlikable hero in children's lit

Behind the lasting appeal of the "abnormal, ill-adjusted and egocentric" 11-year-old 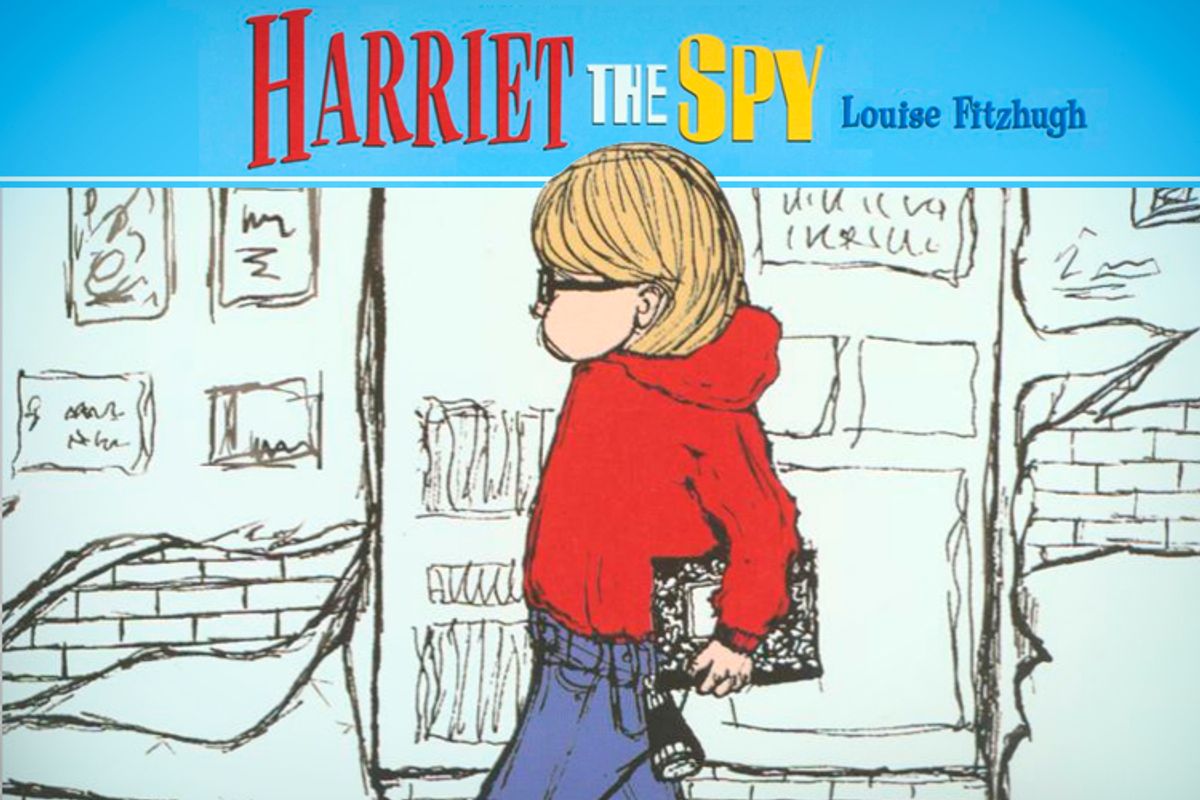 A lot has changed since 1964, when "Harriet the Spy" was first published and then tiptoed its way into the canon of 20th-century children's literature. A lot hasn't changed as well. In 1964, the Horn Book, a respected review of the genre, condemned Louise Fitzhugh's debut novel for depicting characters who are "abnormal, ill-adjusted and egocentric." You can find plenty of concurring reader reviews on Amazon, by parents who complain that the book is "so outspoken negative, mean, and awful." Nevertheless, to this day "Harriet the Spy" commands a devoted multitude of fans and can usually be found near the top of lists of the greatest kids' books of all time.

If you've never read "Harriet the Spy" (poor you!), know that it's the story of an 11-year-old tomboy who lives on the Upper East Side of Manhattan. What Harriet wants to be when she grows up is, alternately, a spy or a writer, but given the long history of spies-turned-novelists and even the handful of novelists-turned-spies, she may not have to choose. She carries a composition notebook with her wherever she goes, recording everything she notices about the people she sees and hears, as well as her own thoughts ("I WONDER WHAT IT WOULD BE LIKE TO BE A TABLE OR A CHAIR OR A BATHTUB OR ANOTHER PERSON"). She also patrols a "spy route," secreting herself near windows, skylights and even, memorably, inside a dumbwaiter, so she can eavesdrop on her neighbors.

The second half of the novel recounts what happens when Harriet loses her notebook during a game of tag and the classmates who find it get to read what she really thinks of them. She becomes an outcast at school. This isolation is made more painful by the earlier loss of her beloved, Dostoyevsky-reading nanny, Ole Golly, who leaves her job to get married. Yet Harriet remains defiantly committed to her notebooks, and even after she finally apologizes to the class, reconciles with her two best friends, Sport and Janie, and gets a gig editing the school paper, her takeaway from the whole affair is "Ole Golly is right. Sometimes you have to lie."

Make no mistake, Harriet is not a nice girl. In her defense, Gregory Maguire writes in an essay included in the special 50th anniversary edition of "Harriet the Spy," "Harriet was honest, which is not the same thing as mean." That's debatable, given, say, how much of Harriet's vituperation is directed at the unfortunate Pinky Whitehead, a classmate who offends chiefly by being "so pale, thin and weak that he looked like a glass of milk." Of the fundamentally harmless Pinky, Harriet writes, "DOES HIS MOTHER HATE HIM? IF I HAD HIM, I'D HATE HIM."

For these and many other reasons, I'm going to call Harriet mean as well as honest. There's a frisson to Fitzhugh's frankness about this -- or at least there used to be, when we lived in a world in which people hesitated to express their most uncharitable thoughts in public. In an age of Internet comments threads and Facebook bullying, the willingness to describe other people as "disgusting" and "repulsive" seems a lot less unusual and refreshing. Still, Harriet voices the secret opinions and loathings of many a child, the ones that adults would much rather believe children are too innocent to harbor.

Harriet also sneaks around, peeking in windows to watch people unawares, which makes her protestations that her classmates have invaded her privacy by reading her notebook a bit rich. So she's kind of creepy and something of a hypocrite. She may be the most unlikable hero in any children's book, yet children, by the millions, insist on liking her.

What's Harriet's appeal? As Jonathan Franzen says in a blurb printed on the new edition, "I don't know of a better novel about the costs and rewards of being a truth teller, nor of any book that made more readers of my generation want to become fiction writers." (You can certainly see why the story of someone who writes tactless things and ends up being reviled by her peers would speak to him.) Writers, as a rule, find Harriet's story profound and at times painfully familiar. But Harriet also represents a constellation of vocations that feature prominently in our favorite forms of entertainment: not just spies and writers, but journalists and detectives.

Nosy types, in short. Their work is to find out the things we most want to know, yet we remain ambivalent about how they do it and the effects of their discoveries. (The hated paparazzi who try to photograph celebrities' kids are a manifestation of the public's weird obsession with seeing what those kids look like, after all.) When Harriet finally gets the chance to print some of the observations she's made on her spy route in the school newspaper -- "JACK PETERS (LAURA PETERS' FATHER) WAS STONED OUT OF HIS MIND AT THE PETERSES' PARTY LAST SATURDAY NIGHT" -- her schoolmates gobble them up. Given that Harriet is the missing link between Jo March and Janet Malcolm, it's surprising so few writers have tried to imagine her adulthood. I'm aware of only one example: A little-known story by Jonathan Lethem, "The Insipid Profession of Jonathan Horneboom," in which a grown-up Harriet is a private eye caught up in a surreal case involving a kitsch painter with an alter ego.

Above all, though, Harriet's spying is a function of her age. All children are spies, constantly surveilling adults for the information they need to figure out what's really going on and how to grow up themselves. Adults prove themselves chronically unwilling to level with kids, so what else can they do but eavesdrop and snoop? They learn to pay less heed to what we tell them outright and more to the things we try to hide from them. Even if they have no interest in writing any of this down, they all know just what Harriet is up to. And that's why they'll never tire of her story.