The one problem with Spike Lee's gentrification argument

Lee's right to be concerned about the expulsion of New York's minorities. The irony is he may have helped cause it 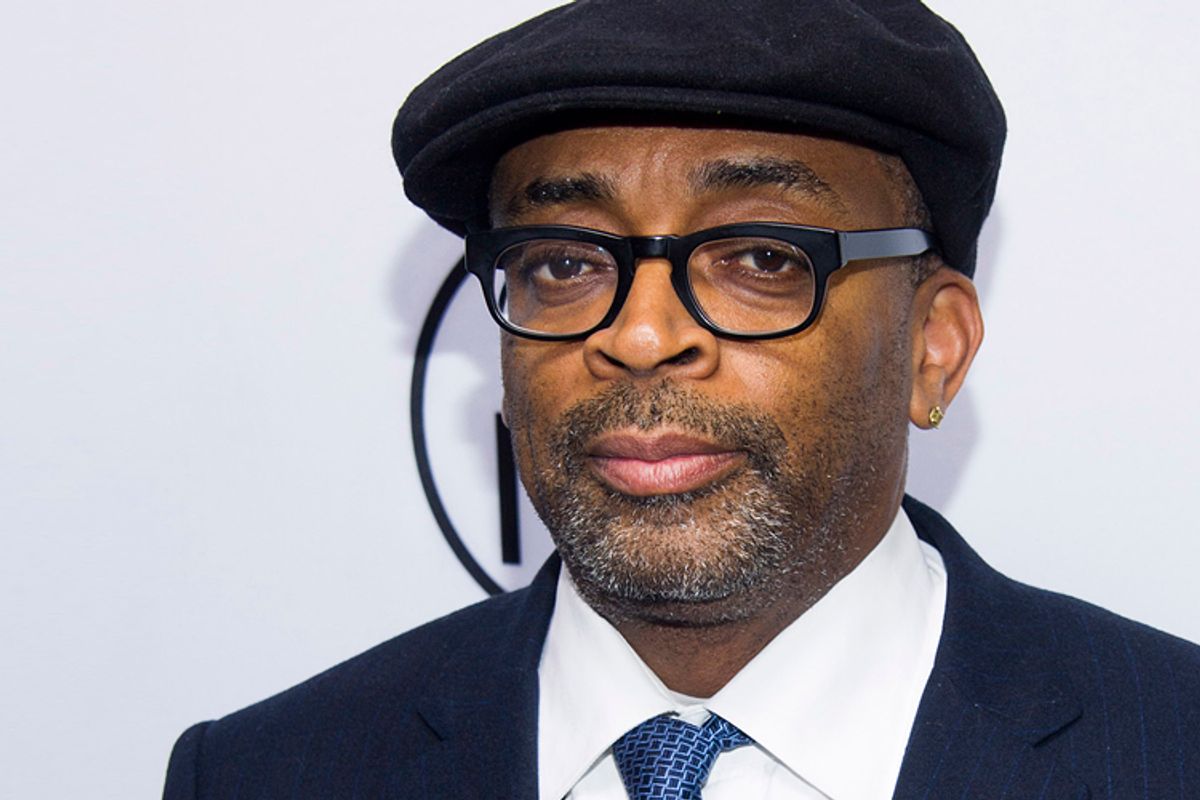 This article was originally published by PostBourgie.

Last night at Pratt Institute, some poor dude asked Spike Lee if he might see “the other side” — that is, the good side —  of  Brooklyn’s gentrification.

While I don’t know for sure that Spike’s sleepy eyes got big and buggy, I like to imagine that that’s what happened as this went down.

Here’s the thing: I grew up here in Fort Greene. I grew up here in New York. It’s changed. And why does it take an influx of white New Yorkers in the south Bronx, in Harlem, in Bed Stuy, in Crown Heights for the facilities to get better? The garbage wasn’t picked up every motherfuckin’ day when I was living in 165 Washington Park. P.S. 20 was not good. P.S. 11. Rothschild 294. The police weren’t around. When you see white mothers pushing their babies in strollers, three o’clock in the morning on 125th Street, that must tell you something.
[Audience member: And I don’t dispute that … ]

[Audience member: Can I talk about something?]

Nah. You can’t do that. You can’t just come in the neighborhood and start bogarting and say, like you’re motherfuckin’ Columbus and kill off the Native Americans. Or what they do in Brazil, what they did to the indigenous people. You have to come with respect. There’s a code. There’s people.

You can’t just — here’s another thing: When Michael Jackson died they wanted to have a party for him in motherfuckin’ Fort Greene Park and all of a sudden the white people in Fort Greene said, “Wait a minute! We can’t have black people having a party for Michael Jackson to celebrate his life. Who’s coming to the neighborhood? They’re gonna leave lots of garbage.” Garbage? Have you seen Fort Greene Park in the morning? It’s like the motherfuckin’ Westminster Dog Show. There’s 20,000 dogs running around. Whoa. So we had to move it to Prospect Park!

I mean, they just move in the neighborhood. You just can’t come in the neighborhood. I’m for democracy and letting everybody live but you gotta have some respect. You can’t just come in when people have a culture that’s been laid down for generations and you come in and now shit gotta change because you’re here? Get the fuck outta here. Can’t do that!

And then! [to audience member] Whoa whoa whoa. And then! So you’re talking about the people’s property change? But what about the people who are renting? They can’t afford it anymore! You can’t afford it. People want live in Fort Greene. People wanna live in Clinton Hill. The Lower East Side, they move to Williamsburg, they can’t even afford fuckin’, motherfuckin’ Williamsburg now because of motherfuckin’ hipsters. What do they call Bushwick now? What’s the word?
[Audience: East Williamsburg]

That’s another thing: Motherfuckin’… These real estate motherfuckers are changing names! Stuyvestant Heights? 110th to 125th, there’s another name for Harlem. What is it? What? What is it? No, no, not Morningside Heights. There’s a new one. [Audience: SpaHa] What the fuck is that? How you changin’ names?

You can (and should) listen to their whole exchange here:

(I love Fort Greene. I’d wanted to live in Fort Greene since I was like, 11 or 12, but that was mostly because I wanted to solve mysteries with the Ghostwriter team. And before I moved to DC last year, I’d lived in Brooklyn for a decade, five of those in Fort Greene. It’s the place that most feels like home to me as an adult. But that neighborhood — area code 11205 — saw its share of white inhabitants jump from 20 percent to 50 percent between 2000 and 2010.)

One irony here is that a lot of folks might understandably lay the gentrification of Fort Greene at Spike Lee’s feet.

Nelson George’s documentary Brooklyn Boheme sketched out the crazy mini-black/boriqua boho Renaissance in Fort Greene in the late ’80s/mid-’90s. The film is a love letter to that era, as George was very much a part of that scene.

Wesley Snipes was just a young buck who threw wild, sweaty-ass parties in his brownstone in the summertime. The glorious Rosie Perez, who still lives near the park, remembered how she used to roll up to Snipes’s parties, but would leave because of to all the holleration and ribaldry.

Pre-SNL Chris Rock was a struggling comedian renting out another brownstone on Carlton or Clermont for $300 a month just around the corner, and recalled when some burglars tried to break down his door with a sledgehammer.

The photographer Lorna Simpson was there just getting started out, as was the writer/theater director Carl Hancock Rux.

Everyone tried to get at this baddie named Halle Berry, who moved to the neighborhood for a summer for a bit part in one of Spike’s movies.

Vernon Reid, who went to Brooklyn Tech, stayed in the neighborhood after graduating high school and started his rock music career in earnest.

Guru and Premier were just young dudes who were trying to get put on, and they rented a room upstairs from a young Branford Marsalis, who had just moved up North from Louisiana. (Apparently, Jazzmatazz came out of this proximity.)

A little bit later, Erica Wright — the Queen Badu! — would move there to perform poetry at Brooklyn Moon on Fulton, along with locals who went by Mos Def and Talib Kweli. (Badu still owned a studio apartment there as of a few years ago.) Saul Williams moved to the city after he graduated from Morehouse and fell in with that set.

It was the kind of place where a random photo from the early ’90s might capture a super-young Black Thought kicking it with some folks and a super-young Laurence Fishburne just hanging out in the background.

For a long time, Spike was at the center of this scene; it’s no accident that Snipes, Perez and a bunch of other people from the neighborhood all appeared in Spike’s early films.1

One theory of gentrification is that artists and creatives are a key part of its early stages, because they make an area more desirable for young people, and they have a lot of free time and the inclination to make old homes and neighborhoods pretty. Once those neighborhoods become cool, trendy places to live, the money follows.  It’s not hard to see Spike as being implicated in that, even indirectly.

In Boheme, Spike said that his wife tired of having random neighborhood folks knocking on the door of their brownstone right off Fort Greene Park at all hours of the night. According to Lee, she told them that he had to choose between staying in the beloved neighborhood where he grew up and everyone knew him or her and their daughter, Satchel. He obviously chose his family, and so they moved and sold their brownstone for a million dollars — a then-unheard of sum for a neighborhood that was still run through with crackheads and crime. Real estate agents quickly noticed that something was afoot in Fort Greene when they could fetch a million dollars for homes in a neighborhood still rife with crackheads and crime. Thus, George posits, Spike’s sale of his brownstone was the beginning of the Park Slope-ification of Fort Greene.

1. At the screening for the documentary that I went to, Nelson George told a  story in which Branford Marsalis recalls walking down Washington Avenue with his five-year-old son when a crackhead approached him. “I’ll suck your dick for five dollars!” the crackhead said. Marsalis then called up Spike sorrowfully, saying that he knew it was time for him to leave the neighborhood. That moment — or the “suck your dick”  line, at least —  ended up in Jungle Fever.↩