The beloved doodles get a challenge to broaden their honorees 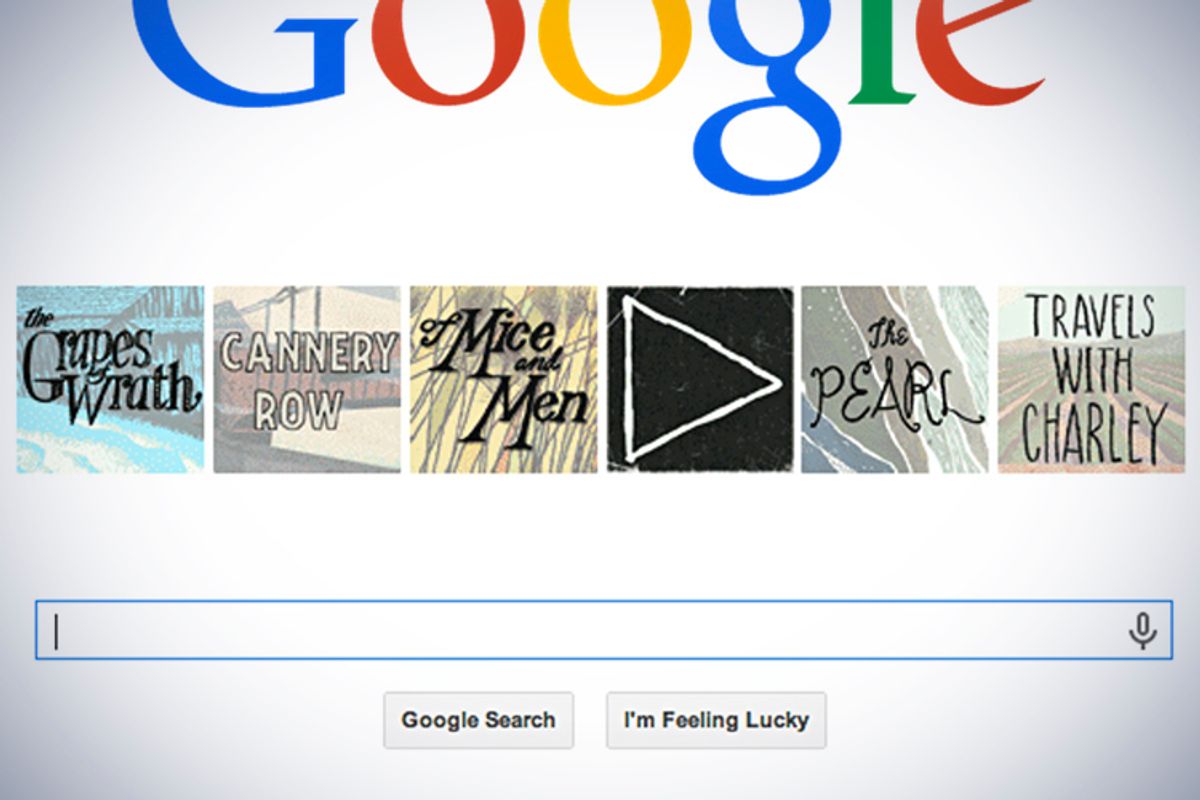 Was it John Steinbeck, of all people, who was the tipping point? On Thursday, just as Google was celebrating the birth date of the Pulitzer and Nobel Prize-winning novelist with a beautifully illustrated interactive journey through his most famous works and quotes, the activist group SPARK Movement was launching its own set of graphics. In lines simple and easy to read as any doodle, the organization revealed that of the 445 individuals Google has celebrated worldwide with its famed doodles, "an overwhelming 357 of those people were men–and 275 of those men were white."

The numbers are stark, if not exactly shocking. Since their inception, there have only been 19 doodles honoring women of color – and the first woman of color to be honored with a global Doodle (one seen by users worldwide) was Ella Fitzgerald, just last year. Women made "up only 17% of Google doodles honoring people from 2010 to 2013," and "White people made up 91% of global doodles and 74% of total doodles honoring people from 2010 to 2013." And as SPARK says, "This is a big problem ... We want Google to correct this imbalance. We’re asking them to #DoodleUs–to get real about history and to stop contributing to the dangerous fiction that white men built and did everything worth remembering." To try to change that perception a bit, SPARK has come up with a terrific new Tumblr of suggestions for more diverse doodle honorees.

Despite its self-effacingly casual name, the Google doodle has tremendous impact. Doodles reliably go viral, and they inspire casual Internet searchers to stop a moment to learn about individuals of achievement. They get your kids interested in history. They inspire. They entertain. Sure, the world does not lack for white heterosexual men whose deeds merit praise. Frankly, my personal favorite Doodle is and always will be the Pac-Man. It had "Man" in its very name! But SPARK's call to change is not about cranky females being cranky about seemingly trivial stuff. Believe me, we get tired of pointing this crap out too. But here it is again: continually singling out the same kinds of humans again and again -- whether it's on Sunday morning talk shows or in New York Times book reviews or in movie screen time -- is plain lazy. It reinforces the prevailing notion that we live in a world that is white and male and straight. And yo, look around, we don't.

Earlier this month, Anil Dash wrote a candid and challenging piece for Medium about his own realization that he'd been retweeting men far more than women – and his yearlong quest to change that by only promoting tweets by females. It was a call to "Give it a try ... try being mindful of whose voices you share, amplify, validate and promote to others," one that I have since been imperfectly but consciously trying to emulate, by expanding the range of individuals I follow and "amplify."

These things take thought, I know. But they're also not impossible. It is not a monumental effort to shift the landscape. It just takes being, as Dash says, mindful. And it's one of the best ways in which we can use social media to change the world.

No one is suggesting there's an evil Google conspiracy to ignore the accomplishments of women and individuals of color and other groups. Google did, after all, just this month strike a conspicuous stance for LGBT rights with its elegant tribute to the Sochi Olympics. But the prevailing, overwhelming story of honoring the same types of people again and again keeps happening, largely because that's the narrative we've all been given and the easiest one to cling to. That's not so much racist and sexist as purely unimaginative. As dead white male John Steinbeck once said, "There ain't no sin and there ain't no virtue. There's just stuff people do." But given the chance, shouldn't they try to do better? Because as SPARK asks, "When all you hear is about other people's achievements, how are you supposed to believe you can do the same?"