Suffering from hobbit withdrawal? These tracks will give you a Middle-earth fix 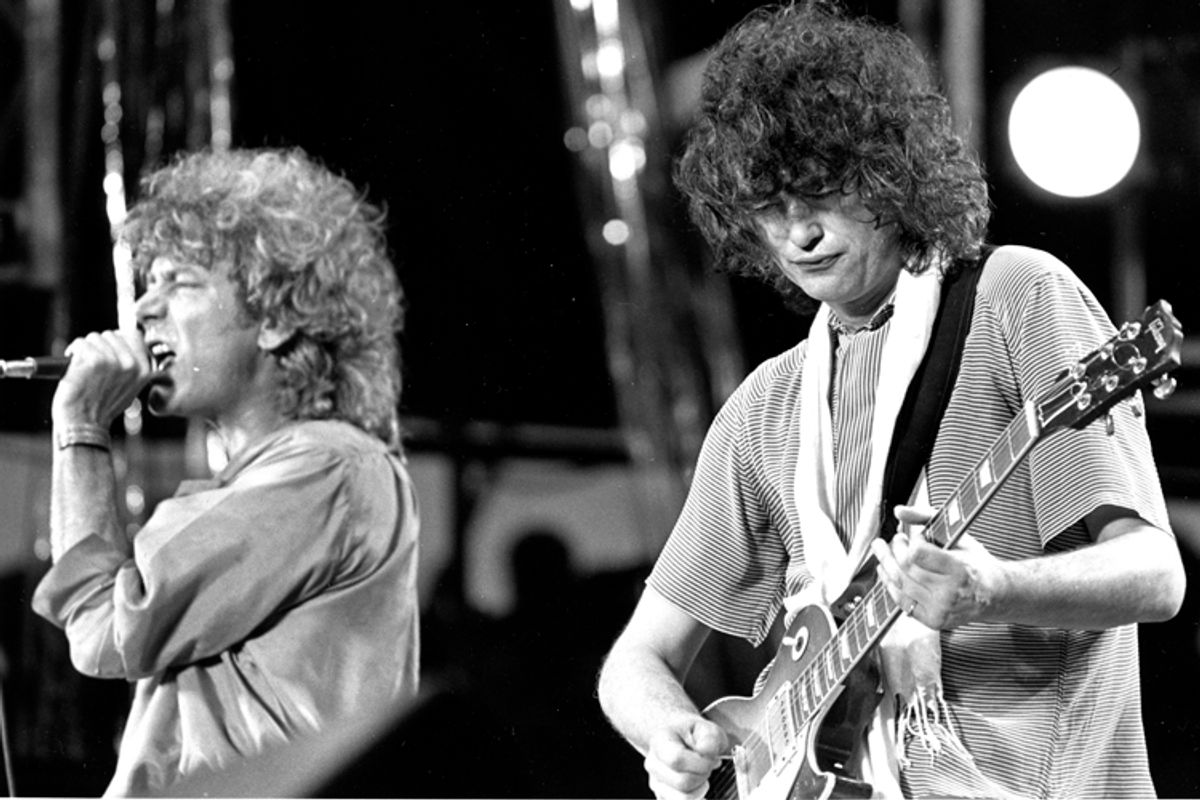 Outside the Bible and other religious texts, Tolkien's Middle-earth has probably inspired more music than any other written thing. "The Lord of the Rings" and "The Hobbit" are filled with songs and poems themselves, but performers have also taken inspiration from the metal snarl and grunt of orcs, the twee folk-frolicking in sylvan glades, and the towering orchestral clashing of armies. Below are a smattering of favorites for the geeky Gollum in everyone.

Probably the single most famous Tolkien allusion in history is Zeppelin's preposterous, woozy tribute/desecration, in which a generic peripatetic quest for some lost love or other takes a sudden turn into Middle-earth.  " T'was in the darkest depths of Mordor, I met a girl so fair. /But Gollum, and the evil one crept up and slipped away with her, her, her ... yeah." You can see Robert Plant sitting there one night, hunched over a worn copy of "Return of the King," suddenly sitting up and turning to Jimmy with wide-eyed inspiration so intense he almost falls out of his leather pants.  "Wow — the One Ring — it's just … it's just all about love, in't?"

Vision, "5 AM in Toronto" freestyle cover

You don't usually think of Tolkien and hip-hop together, but Saurons and Bagginses do pop up from time to time in various lyrical flows, as you'll discover if you search the amazing Rap Genius site.  Vision's fleet-lipped freestyle over Drake's "5 AM in Toronto" is, I think, the best Tolkien riff I found: "My archive begins from the heartbeat/And ends with a part 3, like ... / Lord of the Rings/Return of a King/But gotta keep your eyes on Gollum/Smeagol sneaking through your saga/What's a Smeagol to a Hobbit?/What's a Hobbit to a goblin?/what's a goblin to a Gandalf?/Grey to white, I saved their life create a line you can't cross." Probably the only time Jose Canseco and Poseidon have both been in such close proximity to Aragorn.

Nuclear Rabbit, "The Pimp the Bitch and the Magical Bean"

California avant-metal weirdos Nuclear Rabbit perused the Riddle Game and came up with the obvious single-entendre, Beavis and Butt-head answer for what has it got in its pocketssss. Some lascivious freak shrieks "Bilbo Bulbous Dildo/Hairy Hobbit Hero," while the bassist demonstrates how much he's been damaged by Mike Watt and J.R.R. Tolkien spins erratically in his grave. It's all unseen but by one eye, don't you know.

Burzum, "En ring til aa herske" (One Ring to Rule)

Norwegian black metal pioneer Varg Vikernes is best known for being a murderer and arsonist, but among his less unpleasant accomplishments is Tolkien geekery. Burzum means "darkness" in the Black Speech, and Vikernes' stage name, Grishnackh, is taken from one of Tolkien's orcs. This track about the one ring certainly sounds like the sort of thing that Sauron would have programmed on his iPod in Mordor — the grimy drone punctuated by tortured, throat-tearing screams.

The pioneering California Heavy Metal sloggers took their name from the path into Mordor guarded by the repulsive Shelob. This track off their classic 1984 album "King of the Dead" seems to suggest that they don't exactly know what their name means, though; they keep insisting that Cirith Ungol is a tower of fire. Still, they get the general atmosphere right. "Try to run, try to hide/If you don't you'll surely die," and "Demons circle the smoky skies/Your fate hangs before you, on a wheel of fire/As you stand revealed to Satan's eye." Maybe they thought Satan was more universal than Sauron … or maybe they feared lawsuits from the Tolkien estate.  Or possibly it's just hard to think with those doom sludge riffs chasing you through the prog changes like so many bloated, oozing arachnids.

Sally Oldfield, "Songs of the Quendi"

Sally Oldfield's blend of New Age and British folk makes her particularly suited to go wandering mistily through Lothlorien and environs. "Quendi" is "elf" in Tolkien elvish. Oldfields' warbling, semi-operatic hippie fortune-cookie dramatic pronouncements ("let go the hands that you hold/they'll just imprison you/till you are old") trip lightly into uber-twee keyboard uplift as her high voice goes impossibly even higher. Is "Three rings for the elven kings," really supposed to sound quite so cheery? In any case, as one of the commenters on YouTube says, "Try riding your horse to it … amazing!"

Australian jazz composer and multi-instrumentalist John Sangster recorded five double albums inspired by Tolkien's work. I've only listened to the first "Lord of the Rings" set … which honestly is a little too impressed with its own cleverness to wear well over a full hour and a half plus. Still, by itself, the strutting "Gandalf the White" is an enjoyable effort. You can see the white wizard riding boldly across the heath, sword flashing — or sitting back and blowing smoke rings to Graeme Lyall's hip bop soprano sax solo.

Billy Boyd's mostly a cappella elegy is the musical highlight of Peter Jackson's trilogy. It's a tribute to the brilliance of the Foley artists as well, as the chewing sounds and the creak of the bows being drawn form a queasily ugly backdrop for the purity of Boyd's lament.

The great Indian Bollywood composer A.R. Rahman wrote music for a stage adaptation of "The Lord of the Rings." This song is a fitting ode to the magical voice of Saruman, with the singers' vocals wrapped and twined around each other, keening, intricate and unworldly.

Ernest Kinsolving and Kristoph Klover perform the lyrics Bilbo Baggins recites at the conclusion of the Hobbit when he sees the Shire again after his journeying. The bit at the end where they turn the song into a round seems like an especially hobbitish moment. The music is by Marion Zimmer Bradley, Kristoph Klover, & Margaret Davis,  who wrote tunes for a whole CD worth of Tolkien songs.  Richard Cook helpfully listed other versions of the walking song here, in case you have a particularly long journey ahead of you.

Tom Rapp's setting for Tokien's Ring poem is all slow-motion dissonance and creeping wrongness. The voice after the scratching feedback is a trumpeter who was at the Charge of the Light Brigade, mixing Tennyson and Tolkien into an unsettling British fantasist bolus.