Best moments of the Oscar front-runners: The dazzling breakthrough of "Gravity"

It's a history-making work of digital artisanship and a clunky adventure yarn. Can it break Oscar's sci-fi taboo? 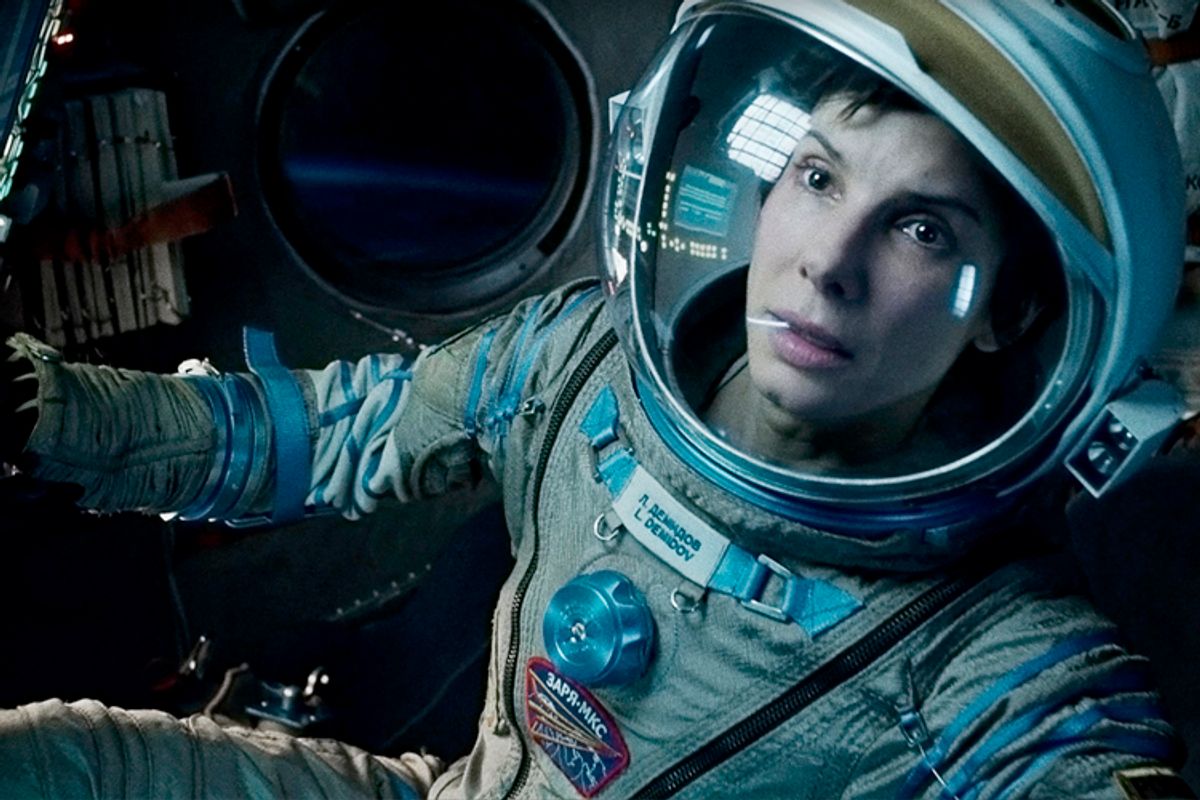 “Gravity” is a movie set in space and a movie about space, a movie that uses the physical and imaginative space of the movie screen in new ways, using the maligned 3-D format to reproduce a three-dimensional realm without up or down, right or left. It has made much more money than any other major Oscar nominee (a dazzling total of $700 million-plus, most of that outside the United States) and has a 100-percent rating from the “top critics” on Rotten Tomatoes, present company included. This is a picture that has claimed the elusive devil’s-candy combination every Hollywood filmmaker dreams about — commercial success and artistic credibility — like nothing else made in 2013. Can director Alfonso Cuarón and his collaborators overcome Oscar voters’ evident bias against effects-driven sci-fi spectacle and cap off this triumphant run with a best-picture prize?

Most Hollywood tea-leaf readers appear to think not, although in a race that’s likely to be decided by a tiny margin, and shaped by the academy’s preferential-voting system, even the best-connected insiders are just guessing. As I wrote earlier this week while pondering “American Hustle,” this year’s Oscar race reaches the finish line as an unprecedented three-way tie, and almost any outcome remains plausible. I’m less interested in the accuracy of all these prognostications than in figuring out how they help us think about this movie, and what they tell us about the film industry’s current self-understanding. Many observers are predicting that the impressive technical achievement of “Gravity” will be rewarded with the best-director prize, but not with best picture. Although this is regarded as an unusual outcome, exactly the same thing happened last year, when Ang Lee won best director for “Life of Pi,” a special-effects showcase that, like “Gravity,” consists largely of human actors pasted into CGI environments.

This may reflect the widespread perception that one anonymous Oscar voter expressed to the Hollywood Reporter in cynical and highly entertaining terms, that being the idea that “Gravity” is a feat of engineering or a planetarium show rather than a movie in the old-fashioned sense. In my initial (and largely positive) review, I compared “Gravity” to a roller coaster ride or a Rube Goldberg machine designed to demonstrate Murphy’s Law with every clank of the gears. Watching it a second time — on DVD, rather than in 3-D on a big screen — I was struck even more by the clunky, exaggerated storytelling beats, and by the way Ed Harris’ godlike “Houston” voice supplies crucial plot details without which the whole thing becomes a near-abstract art film. There isn’t much talking in the domino-effect, action-packed screenplay (written by Cuarón with his son, Jonás), but almost every time Sandra Bullock or George Clooney opened their mouths, I wished they hadn’t.

After two viewings of “Gravity” I’m still not entirely sure how to feel about it, although there’s no question it’s a cinematic landmark. If this is a planetarium show, it’s a remarkably gorgeous one that was created by a master craftsman of cinema and a team of artisanal technicians who skillfully elide the distance between engineering and art. The unanimously positive reviews, to my mind, reflect the amount of overthinking among movie critics and many film buffs over the transition from photochemical film to digital video, and from physical or optical effects to CGI. “Gravity” is a film made at the absolute cutting edge of digital technology, and more than anything else we were relieved to find out that all that money and machinery can produce something that looks beautiful, something that rewards the eye, something that does not involve blue New Age indigenous peoples.

Indeed, Cuarón and cinematographer Emmanuel Lubezki even throw a not-insignificant bone to old-school photographic film loyalists. (Do I have to be clear about this? OK, I do: Spoiler alert!) Most of “Gravity” was shot on the nearly ubiquitous Arri Alexa, the high-end digital camera of the moment — and since much of that footage was digitally constructed, it only counts as “photography” in a virtual or metaphorical sense. But the final scene, with Bullock’s terrestrial splashdown and her straight-outta-Terrence Malick aquatic rebirth, was shot on location at Lake Powell, Ariz., using the near-defunct 65mm film format. (Actually, there are numerous recent examples of an all-digital production incorporating a few images of old-school film for visual or thematic contrast. The future of the photochemical medium, at least in the Hollywood context, may be as a flavoring ingredient, the cumin of movies.)

My problem with “Gravity” was that I got bored with its cascade of nested, melodramatic disasters, and its predigested nuggets of imported spirituality, long before we got to that scene of Sandy swimming with the froggies. At the end of the film, Cuarón is clearly aiming for a revelatory and mysterious vision, a literal and figurative regeneration somewhat akin to the concluding images in “2001: A Space Odyssey.” But he gets there by way of an overwrought tale about a maiden tied to a railroad track, one who — despite her bravery and knowhow and male-coded given name — requires the last-minute intervention of a white knight to save her life. Yes, the white knight is a ghost or a hallucination or a projection of her own ego onto the universe. But he still looks an awful lot like George Clooney.

That scene, two-thirds of the way through the film, is the only one in the entire movie where Clooney and Bullock interact in the same physical space. (The space-capsule interiors are sets constructed at Shepperton Studios in England, with some digital effects added.) Just as Bullock’s Ryan Stone has decided to shut down the compromised Russian capsule where she’s taken refuge and give up hope, Clooney’s Matt Kowalski, the mission commander who untethered himself and drifted away many hours earlier, appears outside, knocks on the door and lets himself in. (This movie has several technical gaffes, by the way, but the idea that you could open a capsule briefly without disaster is not one of them. The exploding eyeballs seen in many sci-fi films are hyperbolic, and a few seconds of exposure to the frozen vacuum of space probably wouldn’t kill you.)

As a moment of epistemological rupture in a film whose primary mode appears to be scientific realism, this scene is ingenious. Of course it’s wildly unlikely that Kowalski could have survived that long in space, and pretty much impossible that he could have found his way to Stone aboard the Soyuz. But for at least a few seconds, we sit there struggling with suspension of disbelief: Is Cuarón seriously proposing a miracle, and are we willing to go along with it? Kowalski’s spectral return immediately follows Bullock’s biggest acting showpiece, the mutually unintelligible conversation with a Greenlandic radio operator where Stone gets to hear dogs barking, a baby crying and a father singing a cradle song, all presumably for the last time.

While Clooney delivers the scene in his best mode of casual bonhomie, digging out a hidden vodka bottle and toasting the Russian cosmonaut whose space-walk record he has just broken, he’s boxed into a cornball angelic-visitation role that seems to have teleported in from a Frank Capra movie. I’ve watched the scene four times, and I find myself actively resisting the dialogue, which amounts to: “So your kid died! Buck up! That’s no reason for you to die alone out here in space!” As if the apocalyptic scenario of “Gravity” and the main character’s solitary and desperate predicament weren’t enough, we have to throw in a dead child and some vague musing about fate, faith and randomness. (If this woman is emotionally damaged and has a death wish, that doesn’t say a lot for NASA’s psychological screening.)

But if that scene exposes the weakness and incoherence of “Gravity” as drama, the film’s very first scene — a single, extraordinary “virtual shot” that lasts almost 13 minutes, in a movie that clocks in at just over 90 — nearly makes up for it. It begins with a breathtaking vista of the earth, seen from orbit, proceeds through the easy banter and technical jargon of the astronauts, abruptly shifts into a mood of emergency and impending disaster, delivers a harrowing set of shocks and ends with Stone, alone and disoriented, spinning away into infinity. It contains all the ideas, all the thrills and terror and all the ambiguous balance between oblivion and transcendence that Cuarón struggles to deliver, in more literal and linear fashion, throughout the rest of the movie. That first shot is “Gravity,” a mesmerizing but chilly accomplishment that has altered the course of cinematic history. Everything that follows is clumsy exposition. What happens on Sunday night will reveal how Hollywood insiders understand that equation.