How "Breaking Bad" and "House of Cards" killed the Oscars 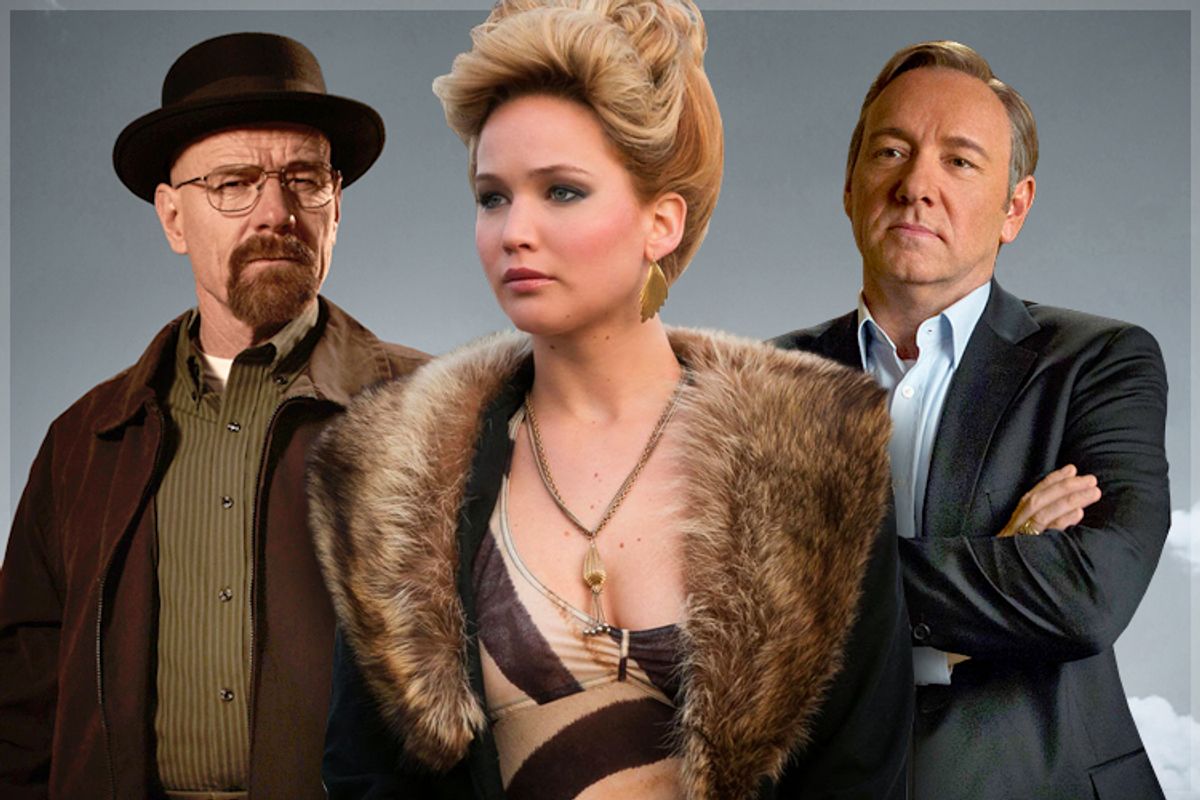 Excerpted from "The $11 Billion Year: From Sundance to the Oscars, an Inside Look at the Changing Hollywood System"

The best movies get made because filmmakers, financiers, champions, and a great many gifted creative people stubbornly ignore the obstacles. The question going forward is how adaptive all these people are. How long will they struggle before they give up on the film business and take their talents elsewhere? And how flexible is the industry itself?

As AMC’s TV drama Breaking Bad took over the water-cooler conversation in 2013, and television critics dominated Twitter in a way that no movie debaters did, it served to reinforce the fact that film’s glory days are over. In today’s omnivorous world, it’s no longer about seeing the new movie opening on Friday or waiting eagerly for the next New Yorker review. Cinephiles go to film festivals for their fix, or to SnagFilms, Criterion, Indieflix, Fandor, Mubi, or Turner Classic Movies. Why schlep out to the new Dumb and Dumber sequel when the glories of Hollywood’s Golden Age are easily Netflixed? (As of this writing, Netflix boasts “38 million members in 40 countries enjoying more than one billion hours of TV shows and movies per month, including original series” even partnering with Marvel on four new live-action MTV series) Even the New York Times film critic A. O. Scott admitted that he was according many of his weekly viewing hours to television—just like everyone else.

There was a time during the golden age of the studio system when Hollywood churned out hundreds of quality films for grownups. In many ways 2012 boasted the best crop of films since the banner year of 1939 that yielded Gone with the Wind, Mr. Smith Goes to Washington, Wuthering Heights, Stagecoach, The Wizard of Oz, Ninotchka, and Dark Victory.

Six of the nine 2012 Best Picture Oscar nominees passed the $100 million mark—the biggest numbers, even with ticket-price adjustments, in recent box-office history. All six were released in the later part of the year. So why don’t the studios finance even more quality “prestige” films—by proven directors, at high budget levels—and aggressively back them, aiming for mass audiences all year long?

Admittedly, this is hard to do. It demands confidence and risk-taking. In late 2012, the studios released a group of films that were made by directors who had won Best Picture and/or Best Director (Steven Spielberg’s Lincoln, Sam Mendes’s Skyfall, Ang Lee’s Life of Pi, Robert Zemeckis’s Flight, Kathryn Bigelow’s Zero Dark Thirty, Peter Jackson’s The Hobbit, Tom Hooper’s Les Misérables), and all but one of those films were released initially in over 2,000 theaters, rather than platformed like the majority of top Oscar contenders in most other years—which is the usual sign of high awards expectations. And they all not only earned consensus rave reviews but made a healthy profit. (Specialty Oscar nominees Amour and Beasts of the Southern Wild took the usual slow-release route.)

But despite 2012’s bountiful harvest of strong, substantive films and action and animated blockbusters that scored record global box office, from Brave to The Hunger Games, there’s precious little optimism about the future of movies. The Best Picture Oscar nominees (whether in 2012 or 2013) are always exceptions that prove the rule, from outsiders jumping over the wall at Sundance (Beasts of the Southern Wild) to insiders willfully refusing to play by the rules (12 Years a Slave). Sure, the studios will permit a few top-of-the-line filmmakers to chase adults in the fourth quarter, but no wholesale changes are in store.

No wonder Spielberg was pissed off. He saw a crowd pleaser in Lincoln. And he was right. It was the top-grossing Oscar contender ($182 million), the eleventh most successful domestic performer of 2012. Why was it so difficult to get traditional studio financing? Like many independents these days, Reliance-backed DreamWorks cobbled together presales on territories overseas (via Twentieth Century Fox, which also took home-video rights) and brought in an outside investor (Participant Media) to fund the movie, which was released by DreamWorks distributor Disney.

The old days of studio largesse are over—even for Spielberg, arguably the most powerful and versatile filmmaker in Hollywood. And if he has to hustle, what about the hordes of less prepossessing talent who find themselves frozen out by the studios? They’re heading where the money is: foreign financing, television, cable, HBO, or Netflix.

While the studios could build on these year-end successes and try to make more of them, they won’t. While they could try to diversify and make movies for underserved constituencies like Hispanics, African Americans, adults, and women, they won’t. They’d rather stick to what they know: cookie-cutter movies for families and young men, and throwing millions of dollars at building a bigger mousetrap. Truth is, the more expensive a movie, the tougher it is for it to have any noticeable personality: all the edges get shaved off. By default the picture has to appeal to the widest number of people—all over the globe. That’s how genre formula, nonstop action, and eye-popping pixel effects keep trumping witty dialogue and old-fashioned storytelling.

To the winners go the spoils. But 2013 revealed the hazards of the tentpole, all-or-nothing approach. Just as Spielberg predicted in his June 12, 2013, panel at USC, six costly would-be summer blockbusters tanked domestically, although a few were barely bailed out by their international grosses. 2013 proved the cyclical theory held by the late A. D. Murphy, a Variety box-office analyst and professor at USC’s Peter Stark program. He declared that it’s perilous to follow the trends of what works at the box office, because when the studios throw imitations of recent hits at moviegoers, moviegoers inevitably get bored. Tom Rothman, an eighteen-year Fox veteran and Fox chairman and CEO until January 2013, who during his tenure backed such risky films as Peter Weir’s Master and Commander and Ang Lee’s Life of Pi, concurs: “Movies struggled this summer because they were, essentially, all the same and the audience was bored. No longer can an audience be pounded into attendance by dint of spending. Now, exactly because of how much great work there is on television, films have to raise the bar, to be more original, more complex, more imaginative, more daring. That is hard because of the huge cost/risk involved, and cost often has an inverse relationship with creativity. But I am fervently optimistic. We can make the films for less, sell them for less, and push creative boundaries more. And when we do, the audience will set the DVR, go out of the house, and come to the theaters. As long as we don’t underestimate them, they will reward us.”

In Hollywood you have to keep moving and stay ahead of the trends. And being able to adapt to digital is key, as is the recognition that consumers’ viewing habits have irrevocably changed.

From the point of view of the seven major studios, the migration of film talent to television isn’t an issue, because their corporations are not losing income; they own pieces of that business too. If HBO makes money, that’s good for Warner Bros. Viacom and Paramount want MTV, VH1, and CBS to succeed. Comcast owns Universal and NBC; Disney owns ABC and ESPN; Sony produces Breaking Bad, Jeopardy, and Wheel of Fortune; and Lionsgate roots for its own shows on AMC Networks.

Tellingly, three studios (Disney/ABC, Twenty First Century Fox, and NBC Universal) decided to hang on to their online streaming service, Hulu, instead of selling it. Finally, they recognized its value—and didn’t want anyone else to get it. Hulu has conducted valuable experiments in what audiences want, even if it’s mostly TV shows. But challenging the studios’ dominance in entertainment are digital powerhouses Google, Apple, Amazon, and Netflix. They are encroaching more and more on the studios’ territory—as Apple did in the music business. Mobiles are the new window into viewing content, and everyone knows it.

Netflix and Amazon are all about giving their customers what they want by constantly tweaking complex algorithms to determine how to anticipate consumer desires. That’s how Netflix knew their subscribers would love a remake of House of Cards, directed by David Fincher and starring Kevin Spacey, and banked $100 million launching their own content division. They probably won’t spend that much again, but they were right. Their high-stakes gamble paid off and made them a potentially strong competitor to HBO, Showtime, FX, and AMC.

While the studios are trying to hang on to their market-share dominance, they are keenly aware that smaller, more nimble companies with less to lose have more freedom to experiment. They saw the music industry’s rapid decline, reinvention, and ascension. The indies can take advantage of new funding sources like Kickstarter and IndieGoGo, produce microbudget films that can make back their money by reaching out to burgeoning online fanbases, and figure out the video-on-demand paradigm as the old windows model eventually falls away. The new indie entrepreneurs are getting their scripts rated on Spec Scout or The Black List. They are connecting with potential investors and sales agents through Slated. They’re going to Seed & Spark for marketing expertise, hiring the best marketing and distribution experts, and using on-demand theater-booking service Tugg to predetermine audience interest in seeing their film in specific markets before making a booking as they control their medium and message.

Digital is winning, even inside the studios. Kevin Tsujihara grabbed the reins at the Warner Bros. studio, knocking out his rivals from TV and motion pictures. Comcast’s Steve Burke let go the movie-bred chairman of Universal, Adam Fogelson—even after what looked like a successful year in 2012—in favor of cable guy Jeff Shell. After a rocky box office in 2013, Sony replaced their marketing chief with their digital marketing pro. And innovative digital-marketing guru Amy Powell—who pioneered Paramount’s on-demand booking of movies—continues to rise in the executive ranks at that studio.

The motion picture CEOs aren’t stupid. While they may be hanging on tight to the old ways so that they can grab as much short-term cash as possible via top-down models that manipulate consumers by telling them what to buy, they know the ground under their feet is unstable. In order to survive they will have to learn to listen to their customers, find out what they want and how to best serve them. The old strategies in the movie business are disintegrating, as the ownership model gives way to one that is all about access. Adapt or die.

From the book "The $11 Billion Year: From Sundance to the Oscars, an Inside Look at the Changing Hollywood System" by Anne Thompson. Copyright 2014 by Anne Thompson. Reprinted by permission of It Books, an imprint of HarperCollins Publishers.