How to survive a future without water

As history-defying droughts become more common, Americans will be forced to cope with the reality of water scarcity 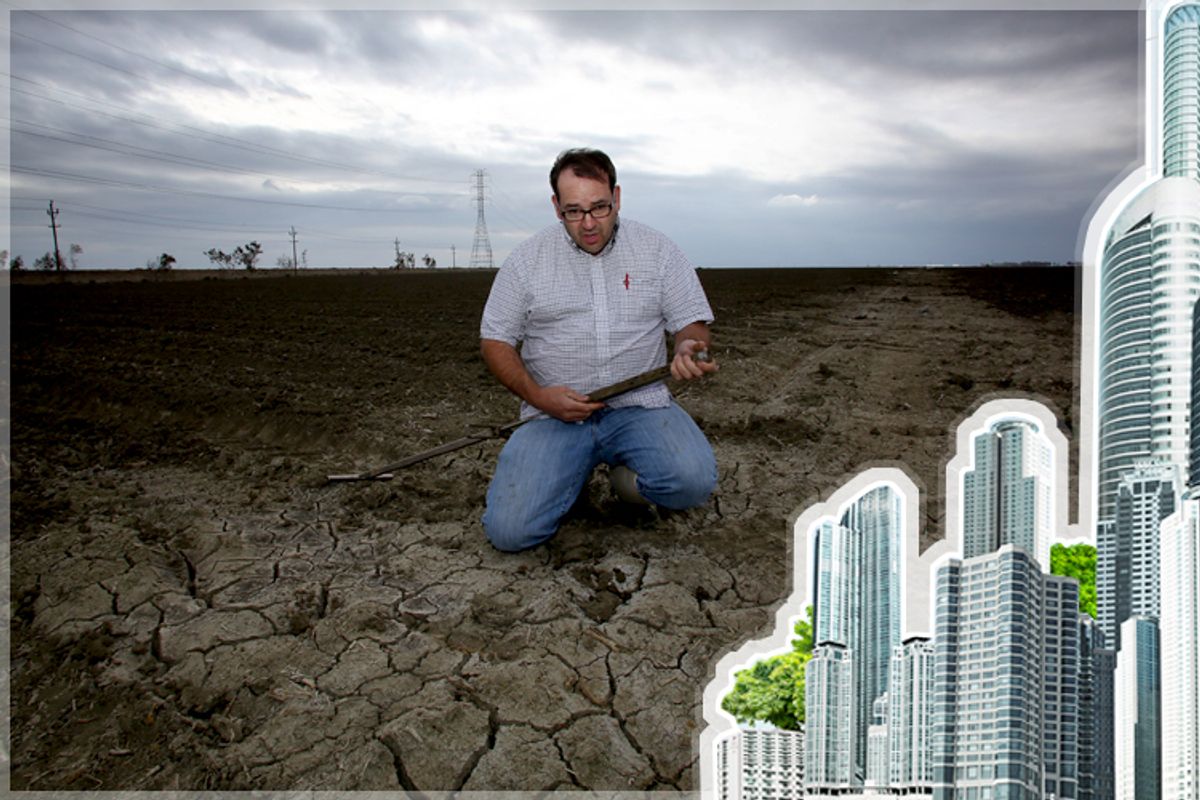 The rain finally came to California this week, and not a moment too soon. Last year was the state's driest year in a century. Over the past two weeks, the percentage of California territory in an “exceptional drought” — the drought monitor’s highest rating — has expanded from 15 to 26, while over 90 percent of the state remains in “severe drought.”

On Jan. 31, 2013, the State Water Project (SWP), the network of pumps and aqueducts that supplies water to 25 million people from Napa to Coachella, issued a historic 0 percent allocation. Translation: Of the 4 million acre-feet of water requested by its constituent water districts, the SWP, for the first time in its 55-year history, can promise nothing.

But what does that mean for the SWP’s largest contractor, the Metropolitan Water District of Southern California -- which includes Los Angeles and San Diego and requests over 1.9 million acre-feet of water? Are they still taking showers in Hollywood?

Even as California’s very dry rainy season comes to a close, the biggest sacrifice L.A. residents are making is to water their lawns every other day. Folsom Lake looks like Mars, the Sierra snowpack is at 25 percent of normal, and the State Water Project, which is supposed to supply two-thirds of the southern California's water imports, has turned off the tap. But lawns are still green in La Jolla.

It’s a sign of how much Southern California’s policies of water management have evolved over the past few decades. For 150 years, the dominant question prompted by California’s water scarcity has been: How can we get more of it? The answers came largely from civil engineers, who ushered in the Anthropocene era of the American West with pumps, aqueducts and dams – more than 1,400 of the latter in California alone. These days, people have started to ask: How can we use less of it?

“The story of Southern California overall is really quite different than what you might have thought if you had last looked at it 20 or 30 years ago,” says David Sedlak, a professor of civil engineering at UC Berkeley and the author of Water 4.0.

That doesn’t mean California doesn’t have serious water problems. There are more than a thousand agencies and departments involved in distributing water in the Golden State, and some are truly running out. A century of water diversions has devastated the state’s freshwater fish populations.

But for an industry whose purpose is not just to provide water, but to sell it, the management of this historic drought signals the extent to which the debate is turning a corner. The financial impulse of the water industry to move more and more product is slowly being curtailed by environmental reality.

The history of water use in Southern California and the Central Valley is best expressed by three gargantuan projects. The first was the Colorado River Aqueduct, a 242-mile conduit that opened in 1939 and carries water across California's Colorado Desert toward the coast. The second is the Central Valley Project, a network of dams, pumps and power plants that began the same year as the Aqueduct and today irrigates 3 million acres. The third is the State Water Project, which was begun in 1960 and typically doles out 2.4 million acre-feet every year, except, in years like this, when it doesn’t.

All three of these systems supply the drier areas of California with imported water. They are among America’s greatest works of engineering. (As Alexis Madrigal notes in a long and excellent history of hydraulic engineering in the Sacramento-San Joaquin Delta, the SWP and the CVP alone account for nearly 5 percent of the entire state’s energy use.) But as continuing population growth and dire climate change predictions fuel new debate about California’s water security, these support systems are viewed by experts as an infrastructural crutch that needs to be shaken off. “It’s not a question of if we need to transition away from imported water,” Sedlak says. “It’s when.”

So even as Jerry Brown plots to increase the imported water supply through a massive tunnel project beneath the largest estuary on the West Coast, Southern California is already looking to break its addiction. The L.A. Dept. of Water and Power, for example, plans to reduce its dependence on imported water by 35 percent by 2035. A 2009 law calling for a 20 percent statewide reduction in urban per-capita water use by 2020 has also forced cities to wean themselves off imported water.

That is no small task: Excessive water use is inscribed into development patterns here. The largest crop in America is lawn, and California grows its fair share of them. “By farming this tremendous annual crop of Kentucky bluegrass, we contribute to the annual amount of water that needs to be supplied,” notes Michael Kiparsky, a director of the Wheeler Institute for Water Law and Policy at UC Berkeley. It’s estimated that half of residential water in the state is used outdoors.

Institutional pressures have also contributed. There is systemic resistance to change in the water industry, and it attracts far less venture capital than other fields of clean technology. There’s also a hydrocratic bias (from water commissioners on up to governors) toward monumental projects — like the CWP, or the new Delta tunnel plan. (Nobody names anything after anybody when people use less water.) Finally, there is no impulse to curtail water use except in times of extreme shortage.

“The original sin of the water business is to get a bunch of revenue from selling water,” says David Zetland, an economist and expert on the MWDSC. “If they conserve water, they get no money. If they sell it all, they run out next month. It’s a very perverse problem.”

When Zetland talks about the future of water use in Southern California, it’s similar to how many people talk about oil and gas in America: Cut down on imports, reduce dependence, charge more, eliminate subsidy for bad policies. Municipal development protocol, for example, has played a pernicious role in creating Southern California’s recurring water crises by failing to properly charge developers for sprawl. It costs cities money in infrastructure and services – but they seldom pass those costs on to builders. The low density of sprawl means more people living far from water, less shared green space and more dry lawns in need of daily sprinklers. In the 1960s, nearly 60 percent of California residential construction was multi-family homes. In the 1990s, that number had fallen to 23 percent. In fact, Zetland says, water utilities have traditionally offered incentives to developments that need a particularly large amount of water — a bonus for buying in bulk.

These days, water companies are doing the opposite. The new deal is called block-rate pricing, and it resembles progressive tax policy: the more water you use, the higher your rates. Two-thirds of southern California residents now pay block-rate pricing, and a new study of the Eastern Municipal Water District (which serves 700,000 people east of Los Angeles) has shown that this policy reduced water use in 13,000 sample households by about 15 percent.

The trend holds true across California cities. According to a 2009 paper, “Myths of California Water — Implications and Reality,” led by researchers at the Public Policy Institute of California, urban per capita water use has fallen significantly across the state since 1995, with especially strong drops in inland California, which uses the most water. There’s still a ways to go: The average California resident uses 200 gallons of water per day. In Australia, that number is 130; in Italy, it’s 100; in Israel, it’s 76.

That international disparity is remarkable, but it’s perversely good news for conservationists: It’s not unimaginable that California residents could one day use half as much water as they do today. Together with advances in desalinization, wastewater treatment and other supply-side innovations, that would greatly relieve pressure on the state’s natural resources.

And just as there’s something of a buffer within Californians’ own water usage — in tough times, they water their lawns just every other day — the state has a much larger buffer in its massive agricultural sector. Three-fourths of California’s water is used on crops (not including that famous Kentucky bluegrass), and about 15 percent of those crops are grown for export. As one vituperative California water blogger puts it, "if we are growing 750,000 acres of nuts for the rest of the world, then we’re shipping 2.25 [million acre-feet]/year of water away in the form of pleasant snacks. Fuck that.”

That’s nearly four times the annual water usage of Los Angeles in exported nuts. In this regard, Sedlak notes, California is in a decidedly better place than some other dry areas of the world. “It seems unlikely that S.C. cities get to the point where they turn on the tap and nothing comes out,” he says. "That’s not true everywhere in the world. [Southern California] doesn’t have its back up to the wall in the same way that Perth or Brisbane did during their extended drought a few years ago.”

In short, they’re still taking showers in Hollywood. But for once, Los Angelenos will be happy this weekend if it rains.