How to debate climate change deniers (without scaring them off)

To reverse our planet's destruction, we need more than scientific data. We need to refine our message to the masses 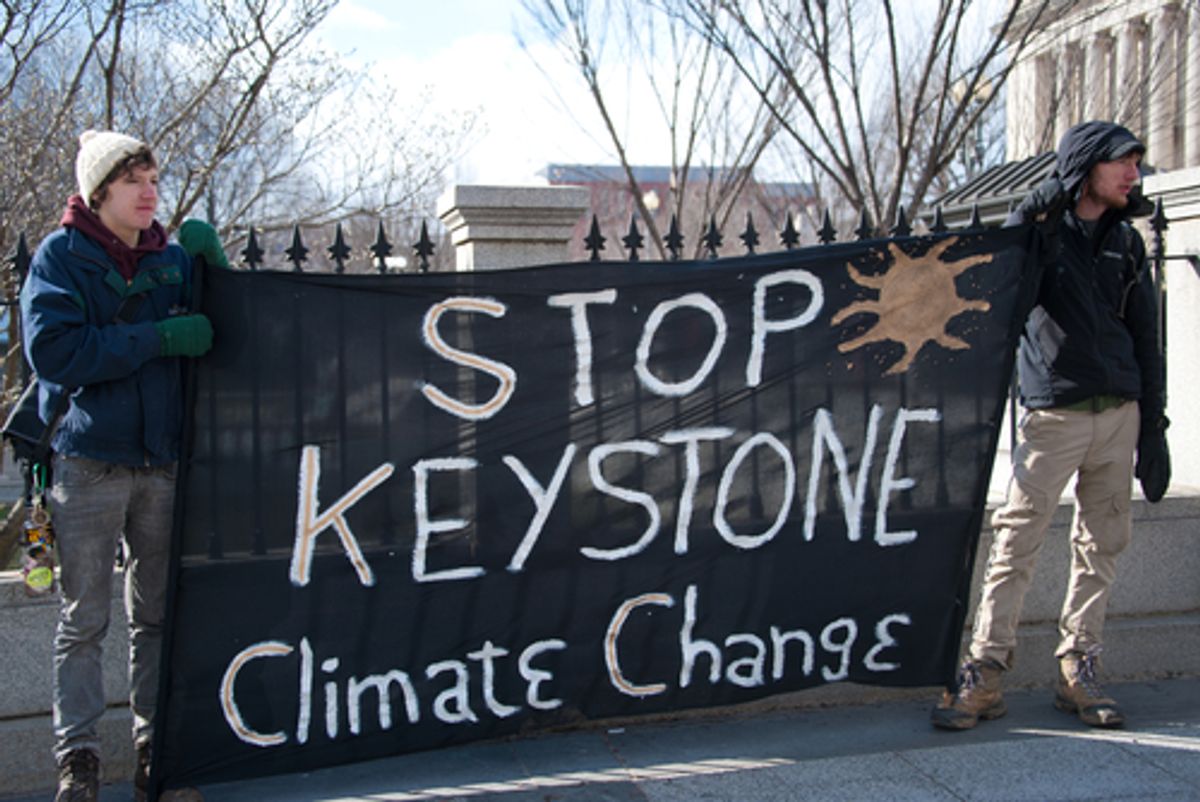 If you want to see an expression of pure despair, ask a college freshman to parse Rachel Carson’s rhetorical choices at 8:00 in the morning. That’s what I’m doing this semester for a composition class I’m teaching at the University of Virginia. The course is called “Representing Climate Change,” and our collective goal is to discover and deploy effective methods of talking and writing about our looming environmental crisis. The task is daunting. Climate change is at once really easy and really hard to write about. It’s easy because there is so much to say, and hard because progress toward a solution is so slow.

But what do I know about the fossil fuel industry? I study literature. I am not a scientist. My specialties are agrarian novels and Modernist aesthetics, not cloud formation or sea ice. When making arguments, I have to trust the vast majority of scientists who agree that humans are changing the climate, that the changes will have huge and unpleasant effects, and that we should really get our act together and fix the problem. The scientists’ job is to perform and publish the research that supports these claims. My job — and my students’ job — starts where peer review ends: we need to make scientific evidence digestible and believable to a general audience. Since solving climate change requires mass engagement, how we talk about the problem matters as much as the science that confirms its urgency.

Few scientists are interested in this public communication project, with notable exceptions. Climatologist Michael Mann, author of the famous “hockey stick” climate model, recently penned an op-ed about the importance of speaking out as a scientist. Peter Kareiva, chief scientist for The Nature Conservancy, has been calling for a “new environmentalism” with a more positive, collaborative tone. And James Hansen, former head of NASA’s Goddard Institute, has long been outspoken about the climate crisis. He threw the Keystone XL controversy into the national spotlight by calling the proposed pipeline “game over for the planet.”

And that’s just it: Hansen’s phrase is what galvanized action, perhaps more than the science behind it. Words have just as much force as ideas; in fact, the two are inextricable. Scientists might occasionally make verbal magic, but writers have to do it all the time. It should be no surprise that Bill McKibben, the founder of 350.org and the country’s most outspoken climate activist, began his career not as a scientist but as a New Yorker writer.

Most people in the English department think of teaching writing as grunt work. We would rather be gushing about Milton’s meter or Woolf’s rhythms than explaining how to write academic arguments. But teaching basic composition skills has its benefits. Learning to write also means learning to think critically, and it is exciting to participate in that Ur-goal of a college education while thinking through an urgent contemporary issue. And because composition is a requirement for graduation, my writing class is much more diverse in terms of race, gender, and culture than most English classes here, which tend to be dominated by white women. My composition classes are geographically diverse, too. I have the usual contingent of Northern Virginians and out-of-staters, plus several students from Appalachian coal country in the west and the Tidewater in the east — both regions that continue to face serious threats from climate change and the fossil fuel industry.

My students are trying to figure out how their writing can contribute to the climate conversation. One tactic they love is finger pointing. In class discussion and in their papers, I come across a lot of “greedy corporations” and “soulless” oil companies and “people who just don’t care.” But is blame rhetorically effective? How should we use it? Working answers: sometimes, and its usefulness depends on the audience.

On the one hand, blaming big companies for climate change can come off as reactionary, strident, and disingenuous. After all, every individual has a carbon footprint and therefore contributes to climate change, even if she takes the bus and buys organic eggs. Who are we to blame companies for providing the consumer goods that we demand? I am part of the problem: I drive a car, fly to conferences, buy cheap clothes at Target. Who am I to point a finger at the oil, airline, and garment industries?

One of my students last semester came from a small town in the mountains of southwest Virginia; she sometimes apologized for her “hick accent.” Her father worked for the car parts manufacturing plant that employed much of the region: how could she blame the industry that kept her family warm and fed? And yet she recognized the urgency of mitigating climate change and wanted to take action.

For people like her, and for people acutely aware of their own complicity in the climate problem, allocating blame probably isn’t the best strategy. Instead, writers need to find a new tone — perhaps the one that Kareiva advocates in his talk “Failed Metaphors and a New Environmentalism for the 21st Century.” Kareiva claims — correctly, I think — that the current environmental message is overwhelmingly negative (“corporations are bad! Climate change is bad!”). He says the tide of public opinion will only turn when we can transform the message into a positive one: how can we work with companies to create a sustainable future? What good have we already accomplished? How might climate consciousness lead to economic prosperity? Removing the specter of blame would let a broader spectrum of people see how environmentalism could buoy their interests, not hurt them.

The blame-free method could work very well to convince auto workers, coal miners, and the fat cats of the business world that we must act on climate change, so it’s an important rhetorical strategy.

But it won’t work in all cases. Why? There are two reasons. First, because corporations will not make the necessary climate and sustainability reforms out of the goodness of their hearts (not that they have hearts, “people” or not). However much we “work with” corporations, some climate reforms will hurt their bottom lines, and corporations cannot take any action that will hurt their bottom lines. Rhetoric can only go so far. That is why we need Congress and the EPA to pass laws and regulations limiting the amount of pollution companies can put in the air: if they don’t, companies won’t. Until sustainable energy is cheaper than fossil fuel, corporations and environmentalists will be fundamentally at odds because the two groups will have different interests: profits on the one hand, sustainability on the other. Cozying up could be dangerous: companies might make a few environmental gestures for marketing purposes without effecting any serious change to their policies.

The second reason positivity won’t always work is that a lot of people like having someone to blame. It is psychologically easier to fight a concrete enemy with a name and identity than to fight a huge, unwieldy, abstract problem. Fairy tales operate on this premise. Lately, the climate movement has too. The New York Times recently wrote that the Keystone XL fight has been great for environmentalists precisely because it comes with a ready-made enemy: TransCanada, the oil company that wants to build the pipeline. To protest TransCanada, anti-pipeline activists have turned to civil disobedience; Bill McKibben and James Hansen have gotten themselves arrested at rallies around the country.

Last fall, several of my students and I heard the billionaire climate activist Tom Steyer speak in Charlottesville. Among other projects, Steyer put up $40 million to found the TomKat Center for Sustainable Energy and is trying to raise $100 million for NextGen Climate Action, a political organization. Researchers there, he said, found that voters respond best to three climate-related messages. One is that clean energy investments will create jobs, not destroy them. This is the “work together” message. Another is that Big Coal and Big Oil are trying to screw over the little guys, the “blame someone” message. These two claims seem to contradict each other, and maybe they do. Maybe each one is just targeting a different demographic. But they might also work in tandem: we do need to work with profit-hungry companies insofar as they help the climate cause, but we also need to recognize that mutual benefit takes us only so far before the public interest diverges from the private.

Steyer’s third message is less about climate change than about public health: it argues that the fossil fuel industries create air and water pollution that sickens local populations. This message certainly emphasizes blame over cooperation. And it takes the conversation in a new direction, reminding us that climate change is not the only negative externality associated with fossil fuels. Focusing on sickness brings climate and energy issues into the present tense. You can see pictures of icky contaminated water and hear people wheezing with asthma, and pretty easily associate these problems with pollution. Meanwhile, most of the population can’t yet associate flooding coastal cities submerged or parched California fields with climate change.

Just like blaming big business, rallying against pollution creates a concrete, recognizable Bad Guy. That’s helpful and apparently effective. But I am interested in ways of talking about climate change that take into account the uncertainty of the near-future crisis — ways that help us think in the long-term. My next post will delve deeper into the problem of uncertainty in the climate conversation. Things will get weird and apocalyptic. The languages of blame and cooperation are indispensible, but they can only take us so far in an issue as complex and contentious as a changing global climate.