In praise of the mani-cam, Oscar night's silliest device

It's the logical end point of Oscar red-carpet excess, and we might as well enjoy it 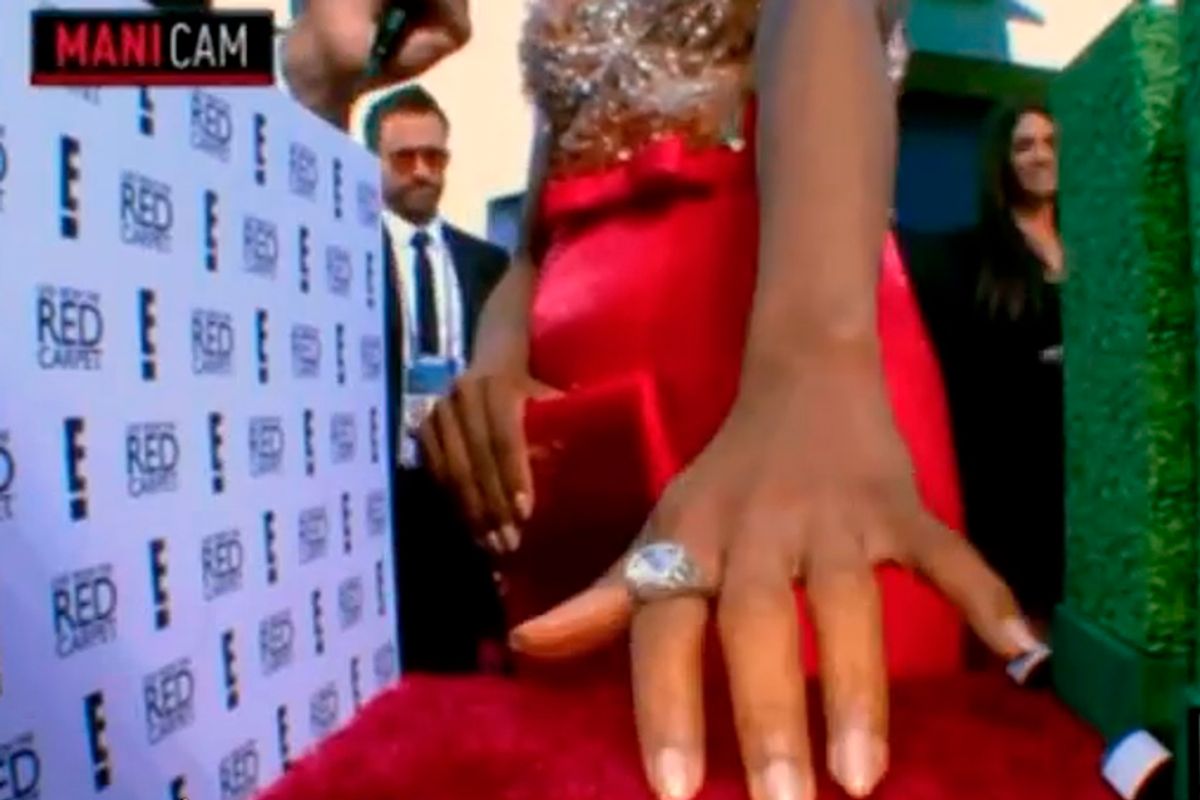 I come not to bury the mani-cam but to praise it.

The "mani-cam," E!'s camera designed to zoom in specifically on an actress's nails, is a fairly recent invention, and the high-water-mark of red-carpet stupidity. It's come in for criticism -- most recently at New York magazine's fashion blog The Cut, which said the camera "should die." If anything ought to die, it's the awards show red carpet as it currently exists; don't blame the mani-cam for just how overextended the cult of high fashion at the Oscars has become. If we're stuck with a fashion arms race at every awards show, it may as well be goofy and fun.

An alternate universe in which Uma Thurman failed to create modern red-carpet culture by wearing a Prada gown to the 1995 Oscars is a universe in which I'd like to live. Before that, even the biggest stars tended to wear less formal gowns by unknown designers or even off-the-rack, as this infographic shows -- the very biggest stars winning the best actress prize tended to dress a bit down for the ceremony. From this vantage point, that approach is deeply charming. Stars of the 1970s and 1980s, looking at today's fashion parade, would likely find it exhausting to contemplate. The stop at the mani-cam is just the final one

Consider the journey of one actress: The only things the relatively simple gold sack dress Meryl Streep wore when she won an Oscar for "Sophie's Choice" and the haute gold Lanvin concoction she wore when she won for "The Iron Lady" share are their wearer and their color. They tell a story of decades during which actresses, rather than models, became the standard-bearers for fashion. Wearing high-fashion duds hadn't historically been part of the job description of an actress, but the combination of more fashion-conscious actresses coming to the fore, the construction of an entire entertainment apparatus around awards shows like the Oscars, and the placement of movie stars on the covers of fashion magazines added up to an environment in which being named "worst-dressed" was a potential career-killer.

There's simply too much pressure to look not just good but model-perfect, on people whose job it is to act. Jennifer Lawrence has signed a multifigure contract with Dior, a fashion house whose elaborate and huge dresses overwhelm her, in order to keep up; Lupita Nyong'o has risen to acclaim as a well-dressed star in a manner that threatens to overshadow just how moving was her performance in "12 Years a Slave."

This shows no sign of abating. We're stuck in a culture where men sail down the red carpet relatively unbothered but women are pestered and dissected from hairdo to high-heel. So why not make the most of it with the one moment of spontaneity the awards have? Practically no one wears elaborate nail art to an awards ceremony. A mani-cam reveals nothing -- aside from E!'s awareness that the rigmarole it helped create has entered a decadent, ludicrous period. There's a certain wit to it, a sharp-edged knowledge that, as no one's manicure will look particularly different from anyone else's, none of this really matters at all. It's the only part of the red-carpet fashion parade that doesn't feel as though it's clawing the stars apart.