Yes, sometimes the dog pees on the lettuce. But gardening's still the most radical political behavior anyone can do 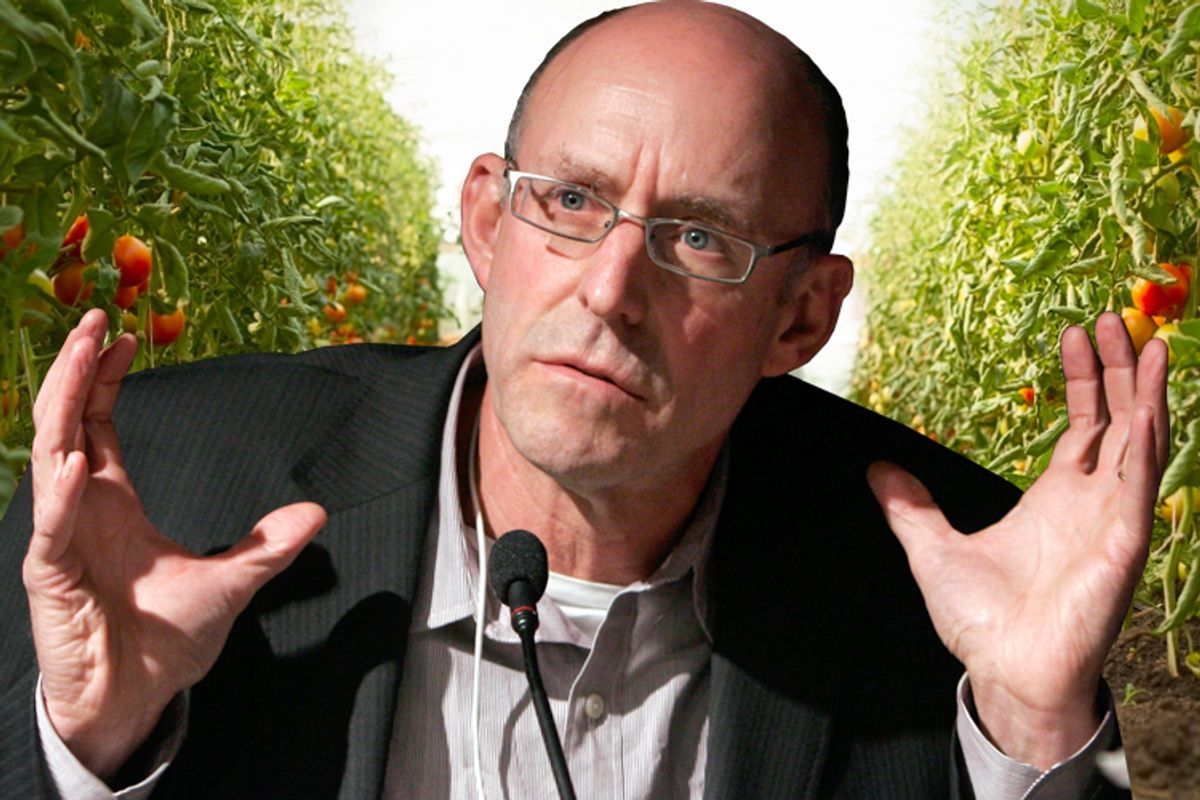 When my husband and I first moved to our house in downtown Raleigh, N.C., nine years ago, we were fascinated by the empty lot between our 1890s Victorian and the neighbor’s bungalow. “That’s where the victory garden used to be,” my neighbors said, pointing to a slightly shaded quarter of an acre.  This garden existed, of course, before the Krispy Kreme was built and the drunks used to sip 40s and eat glazed doughnuts behind our fence.

I’d never thought about the patriotism of gardening, and I didn’t again until we moved to Vermont and inherited two enormous gardens and a small orchard.  God, I thought.  Those look like a lot of work.

But five years later I’m obsessed. I read seed catalogs cover-to-cover, the way I used to look at fashion magazines in college, my hungry gaze raking over the pages: Can this knowledge change my life?  When the catalogs show up in the mail stack at the end of January it feels like an omen, a promise that spring will indeed come, that months from now we will sit at the outdoor picnic table with dinner plucked from the backyard: panzanella with crisp cucumbers and sharp red onions, blueberry and arugula salads, sandwiches piled with flame-colored heirloom tomatoes and smoky roasted eggplant.

For now, in the doldrums of winter, it’s thawed kale stirred into a Ribollita, the last of the summer strawberries made into a cobbler, dried beans soaking in the crock pot. The garden keeps giving year round if we’re smart about freezing and canning — I haven’t given anyone botulism yet.

For me, tending a garden is a liberating act.  I’m freer from the nutritionally void produce at the grocery store; studies show radical declines in the nutritional value of vegetables thanks to industrial, soil-depleting methods.  I feel less responsible for the millions of tons of endocrine-disrupting, life-killing pesticides dumped on soil.  Combining my garden yields with community supported agriculture, I know, really know, where a large percentage of my food comes from.  A home garden is a form of peaceful protest, a way of participating less in a corporate food culture I think is harmful to our health and the environment.

Planting diversely, as one does in a home garden, goes directly against the modern drive for efficiency, hence the rise of monocultures — big plantings of single species that result in faster, high-yield harvests.  Monocultures are hard on soil and susceptible to disease because of high-density genetic similarity.  According to Michael Pollan, 99 percent of Americans eat industrially produced food, much of which comes from corn monoculture.

Small-scale, heirloom gardening promotes plant diversity and sustainable practices like crop rotation and composting, and reduces demand for industrially grown food.  It seems like a drop in the bucket when faced with million-acre monocultures, but America has revolutionized the food system with home gardens before, and can do it again.  During World War II, home gardens accounted for nearly 50 percent of the nation’s food supply.  One of the challenges, however, is that many heirloom varieties are hard to come by, and corporations such as Monsanto are taking over the seed market.

Janisse Ray’s thoughtful, passionate book "The Seed Underground" points out that 94 percent of seed varieties found in 1903 are no longer available; this is an heirloom survival rate of 6 percent.  Sure, hybridization is natural and happens, but losing varieties at that rate is disastrous for agrodiversity.  Ray quotes E.O. Wilson: “The world’s food supply hangs by a slender thread of biodiversity.” Our food system needs people like you and me to grow diverse crops in our backyards, needs us to throw up our little rebellious plots of heirloom beans, nut trees and old-world squash.

Ray notes that Thomas Jefferson, himself a vegetable and seed enthusiast, didn’t think America could have democracy unless 20 percent of the population was self-supporting on small farms.  That’s right — one of our Founding Fathers felt that the best way to maintain a functional democracy was to have a group of people capable of self-sufficiency and real dissent.  We’re so far from this ideal; we’re chained to grocery stores and thus corporations who don’t breed vegetables for their nutritional content but with a bottom line in mind.

Ultimately, when we can’t feed ourselves, we lose autonomy.  First as individuals and families, then as communities, and eventually as a nation; as of 2008, the U.S. became a net importer of food.  So, if we were to run with the Jefferson agrarian ideal, producing your own food is patriotic.  Ideally, we should be a nation better able to feed ourselves.

On average our food travels between 1,500 and 2,000 miles to get to our plates, and this distance is a fast-growing source for greenhouse emissions.  Every ounce of food we produce for ourselves reduces our carbon footprint by shortening the path from source to table.

Commandeer some space.  You don’t need a huge amount of land; organic guru Elliot Coleman works an acre and a half.  Check out rooftops or container gardening if you live in the city, or join an urban farm initiative. Consider soil quality, sun exposure, and water flow when you choose your spot.

Buy or trade for organic, heritage seeds.  And no, not just because they’re pretty or make you feel good about yourself (though have you ever seen a prickly caterpillar legume or a dragon carrot? Gorgeous.)   One of the best ways to promote seed diversity is not only to freeze the little guys in a vault, but to find varieties that appeal to you, grow them in your garden, put them on your table, and exchange them with friends.  Also — know what thrives in your garden zone, and know that it is in flux thanks to global warming, or, as some say, global weirding.

Plan your garden on paper.  If you want your seeds to grow true in the future, you need to keep certain plants away from each other, or else you’ll end up with hybrids, fruits that may not look or taste like the parent crop.  Think square tomatoes or bizarro hook-necked squash.  Hybridization is natural, but it’s also a service to keep passing along true seeds, especially endangered ones like the German Pink Tomato or the Cherokee Trail of Tears bean.

Start your seeds.  Come April, my windowsill will be stacked with messy trays of seedlings, which I’ll shoo the cats away from and mostly remember to water.  We also make use of a small greenhouse/potting shed/spider refuge.

Do right by your soil.  (Here’s a guide from Mother Earth News.)  This is where rescue goats and an ornery mule earn their keep on our farmette:  manure and composting.  I have always believed in the power of good manure, but last year I saw the most glorious, accidental squash plant rise from a pile of mule poop in the barnyard, and I was really sold.

Find your optimal division of labor or barter.  My husband has to have vegetables in a straight line.  I don’t. My husband weeds more devotedly than I do. But I will stay up half the night freezing zucchini medallions, peeling ugly pears for jam, piddling around with batches of pesto, or making applesauce.  Sometimes we trade produce with friends, especially those years where we procrastinate and try to plant the garlic after the ground is frozen solid in fall.  It happens, just not to Martha Stewart.

Give away your excess produce to friends or people in need. Check in with your local shelter, soup kitchen or Meals on Wheels program to see if you can bring by spare zucchinis, or just take a page from the Vermont playbook and leave a basket of squash at your office or at the end of your driveway.

Can, freeze and dehydrate your produce.  Once you recognize the time that goes into putting up and putting away, you’re inclined to waste less food.  To those of you new to putting up food, just forgive the homesteading enthusiasts their use of comic sans and benefit from the exhaustive freezing and canning knowledge on the Internet.  We have a freezer in the basement full of frozen cider, blueberries, strawberries, stock, zucchini, broccoli, collards, kale and various jams.  And a snowman in a pie plate that my girls are saving.  Because, you know, winter just doesn’t last long enough in Vermont.

Save and share your seeds.  You can do no better than Susanne Ashworth’s book "Seed to Seed," or information from the Seed Saver’s Exchange website and catalog, the resources I’m using the most as I fall headfirst into this hobby/labor of love.  I dry most of my seeds on a ceramic plate and store them in envelopes and stapled coffee filters. A few friends and I are going to trade seeds before spring; I’m especially excited about growing and sharing the nearly extinct Sultan’s Golden Organic bean and Bear Paw Popping Corn that was developed in the '30s in Vermont and showcased at the World’s Fair.

Don’t be afraid of failure.  Gardening and preserving are all about tinkering and experimentation. We get flea beetles on our kale, Japanese beetles on the raspberry patch. I have burned maple sap and jam to the bottom of my cast iron pot a hundred times. Last year my morning glory vines choked the pool fence and light post but never bloomed.

I’m no expert, but one thing I like about gardening is the feeling of chasing knowledge.  Beginning a life of gardening — and I’m only a few years in — has stimulated intellectual curiosity geared toward what I feel is a noble outcome, the magic of feeding oneself and others.  When I researched victory gardens, one of the most interesting aspects of that initiative was the hope that gardening would increase morale.  Fill the Depression with Jam! Dig for Victory Now!  Our Food is Fighting!  In a contemporary context, there are less patriotic things we could do with our spare time than ease the burden on our planet’s finite natural resources and feed our families safe, whole food.  A garden, or CSA membership, is a vote for the food culture you believe is best for your community and family.

Yes, sometimes it’s a pain in the ass to grow a garden.  It’s hard work.  You might hurt your back or eat a caterpillar or five in your super fresh broccoli. Your toddlers might help you weed, and by weeding they mean pulling up all the pepper plants. You might need to scream at the dogs for peeing on your lettuce, but that’s what the salad spinner is for.  But you’ll be outside, and maybe your kids will come outside too.  And with your garden you’ll be sticking it to the man, for the man’s own good.