"Girls" recap: "I didn’t mean to make your life ridiculous and all about sex"

This week, we discuss characters who talk like the show's critics, and Dunham's take on mortality 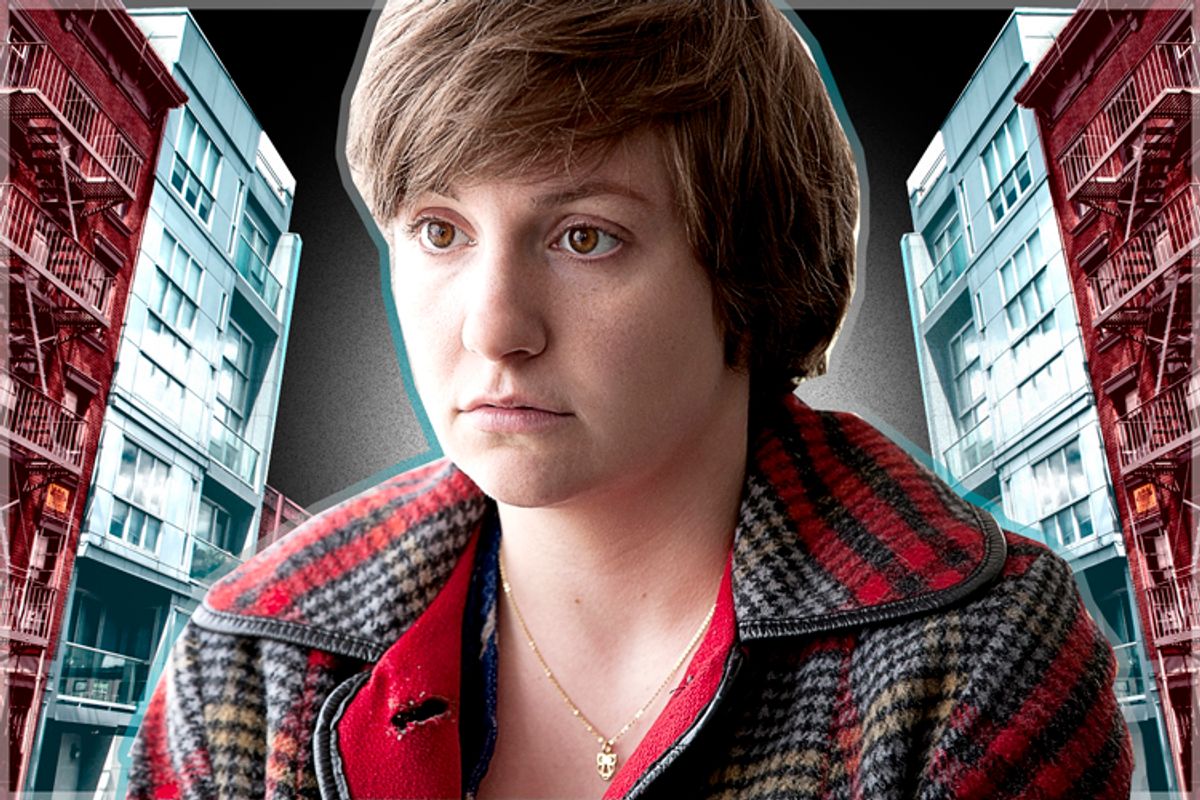 Last night, Hannah was called away from the city to visit her sick, aging grandmother who was thought to be on her deathbed. Despite the specter of mortality hanging in the air – a recurring theme on the show this season – the immediate drama centered around age-old beefs between Hannah’s mother and two aunts. Hannah was also reunited with her studious, humorless cousin Rebecca, with whom she  has a troubled history. In the end, familial affection prevailed over grudges, white lies, husbands, boyfriends, petty fights over who gets what, and car crashes. But love was not enough to stave off tragedy. I enlisted fellow Salon staffer Sarah Gray to help me parse this bittersweet episode.

This is probably one of the best-written episodes of the season. I always like the episodes where they take Hannah out of her usual environment.

I completely agree with you. After watching it, I think this was my favorite episode of the season so far. This season’s been a little lackluster, but I really liked it.

Could you tell me first what you think is lackluster about the season, and then we’ll talk about this episode?

I have a love/hate relationship with Hannah. I think that most people do actually. You see all of your bad traits in her, but you also see some redeeming things. The episodes at the beginning of this season, like the one where her editor dies, were just so uncomfortable and, I don’t know, she just was particularly awful. In this most recent episode she actually seemed really mature and sometimes more mature than the adults in the episode — the older adults because technically, at 25, she’s an adult.

Dealing with death is a recurring theme this season. I think that’s a good way to go because it grounds the show in reality. But I am a little surprised by it based solely on my personal experience. At that age, I didn’t really have to deal with death. I guess people’s parents die and their grandparents die at any age. My grandparents were dead before I was in my 20s, so I didn’t actually have to deal with their death as an adult. None of my friends or associates had died through my 20s, so it was never something I had to deal with. But people have different experiences, so it’s certainly a realistic thing to saddle her with. And in light of the fact that her friends are very self-absorbed, I guess death is one way to sort of pull them out of that.

It touched me. My grandparents are also alive, and so I have yet to experience the death of a grandparent. Hopefully, I won’t soon, knock on wood. I’ve experienced death of other family members. So it was sort of interesting to see how Hannah was going to deal with that and deal with it when it was somebody who was closer to her and it wasn’t about her for the first time. The death of her editor was like, “Oh no, what’s going to happen to my e-book?”

The other thing that was sort of interesting about this episode was the involvement of her aunt and her mother — basically the family relations. I actually also have three sisters, so I think they captured the dynamic fairly well. You have the sister who’s the martyr, the one sister who’s the strong-willed one. Do you have siblings and do you relate to any of these characters?

I have a younger sister and so I can really relate to both Hannah and her cousin’s interactions, even though those are cousins and not sisters. It was really interesting to see how her mom and two aunts -- even though they were all older and should seem more responsible – they sort of reverted back to really petty things. The arguments were so sister-like and so perfect.

You sort of wonder whether it’s them reverting to their childhood personalities.

Clearly the grief agitated their dynamic because it seemed like afterward — after they thought their grandmother was OK — all these expressions of love and affection and the sentiment of We need to spend more time together emerged. It’s as if the grief separated them and then brought them back together.

They were much more civil and actually kind to each other after that. It was interesting to see the way that grief played a role in their interaction and it made me think about that a lot.

By the way, that was Sarah Steele playing Hannah’s cousin. I always like to point out really strong New York actors when I get a chance, and Sarah Steele’s a great one. She was really fantastic in this movie called “Please Give” with Oliver Platt and Catherine Keener. Anyway, I like the way — I don’t know if it was deliberate; I’m starting to believe that it’s very deliberate — that Lena Dunham uses characters in certain situations to voice things that people say about her and her show.

It almost seems as if she’s reflecting public opinions. Like when her cousin gets mad at her for suggesting she might marry a doctor, Hannah apologizes, saying, “I didn’t mean to make your life ridiculous and all about sex.” Which is one possible criticism for the character of Hannah herself – at least in the earlier seasons.

Oh, definitely. And when they talk about writers being really self-absorbed it was a commentary on writers …

She says, “Writers are this ridiculous class of people who make everything about themselves.”

Hannah and her cousin were very much the polar opposites. One's this person studying to be a doctor who’s, like, “It’s better to have my boyfriend who I see once a week and who sees other people.” It was a very scientific manner of doing things versus Hannah’s very emotional, all-over-the-place writer, self-absorbed self. My sister’s the scientist and I’m the writer. We’re probably not each on those extremes, but I sort of related to that pretty well.

That’s a good point. Sarah Steele’s character is a type, as well. She’s like a Type A personality, very academic, sort of the opposite of the Hannah character. I didn’t really think of that. Do you think they would bring her back in future episodes?

I kind of hope so. She’s interesting.

I like how she asks Hannah, “Do you think that you’re funny? You’re not that funny.” One of my favorite running ideas about the show is that you don’t really know whether Hannah is good at her job. I think that that’s fascinating. It’s almost like Norm’s wife on “Cheers.” It’s just something you never see. Like, can she actually write? So, they also manage to squeeze a little Adam-Hannah relationship stuff in this episode, when she gets in the car accident with her cousin and he rushes out to see her. Prior to this episode, how did you feel about Hannah and Adam as a couple?

It’s hard for me to wrap my brain around how much their relationship has changed from the first season. I was thinking about this last night, about how distant and unapproachable Adam was and how it was more just a hookup thing that Hannah didn’t really get. Then, all of a sudden, he was so in love with her and Hannah pushes him away in the second season. Now they’re back together. And I’m really happy that they’re happy together, actually. It’s nice to see the sort of normalcy in that and I think that they’re really sweet. They’re almost sickly sweet right now. But I like it.

You mentioned something that I’ve never heard before in reference to their relationship. You said “normalcy.” Do you mean that they are comfortable together? There’s stability?

Yes. Yes, because, obviously, there is nothing really normal about Hannah or Adam in the sense of people or characters. They’re both extremes. But the fact that they’re so open and communicate with each other and that Adam would jump on the bike to go see Hannah after she texted him “car crash.” That’s what you would hope Hannah would have. You know? Compared to the Adam who just wanted her for sex and was really rude to her the first season. It’s really nice to see. I don’t know.

It’s funny because I feel like you’re echoing what the grandmother says to Hannah at the hospital: That it doesn’t really matter what they go through. They will go through a lot that is terrible, and their relationship will be strained, but the stability is actually important. She puts forth this grim proposition only to say that it will all pass.

She says you will “hate” him.

I feel like that is a very “of that generation” thing to say. My parents are in and around their 80s, and I think that is a sentiment they would share, which is, basically: It’s not all going to be good, but it’s better to be with somebody than to not be with somebody. Then, moments later, you hear Hannah’s mother express a very different sentiment. What do you think she was saying?

I think that she’s saying that Hannah could probably do better than Adam. Or that she doesn’t need to be with anyone at all. Which I think is pretty on par with Hannah’s mom’s generation. Sort of a different wave of feminism where it’s kind of like: You don’t need a man.

Hannah kind of presses her as to what’s so wrong with Adam, and her mom suggests that he is angry and uncomfortable in his own skin.  She also says that he’s “odd” and that she doesn’t want Hannah to spend the rest of her life helping him adjust socially …

I thought that was fascinating because I don’t think that Hannah is that well adjusted that she could even do that for Adam.

Hannah is so weird and so screwed up, but Adam loves her for that and helps her and deals with it. I think it would be less of Hannah having to mother them than them both kind of doing that together for each other. Maybe that’s just my idealistic view of it. Hannah could go back into OCD land; I don’t mean to trivialize it by calling it OCD land, but the mental illness could rear again. Adam was there and was willing to help with that so … You never know.

Well, the last thing, I guess, is the reversal at the end of the episode where you find out that, after all of this, Hannah’s grandmother actually does die. And Hannah, having just gone up to see her – having just got back — is unable to see it and be with her, which is pretty painful.

At the point where it seems the grandmother is going to live, the only thing I could think was, “Oh my gosh! Are Hannah and Adam now going to have to get married because they told her they were engaged.” So, I had this weird — this is so terrible — sense of relief that the sick grandmother was gone because it would mean that these characters would not be forced into this situation. But I thought that Hannah would at least like to see her grandma before she passed. It was kind of cruel to give her this false sense of everything’s OK and then throw her for a loop, making her jump right back on that train again.

Yeah. You could call that “cruel” because it’s a constructed world, and we know that there are writers involved. But I feel like what they were trying to do with that situation was emulate reality.