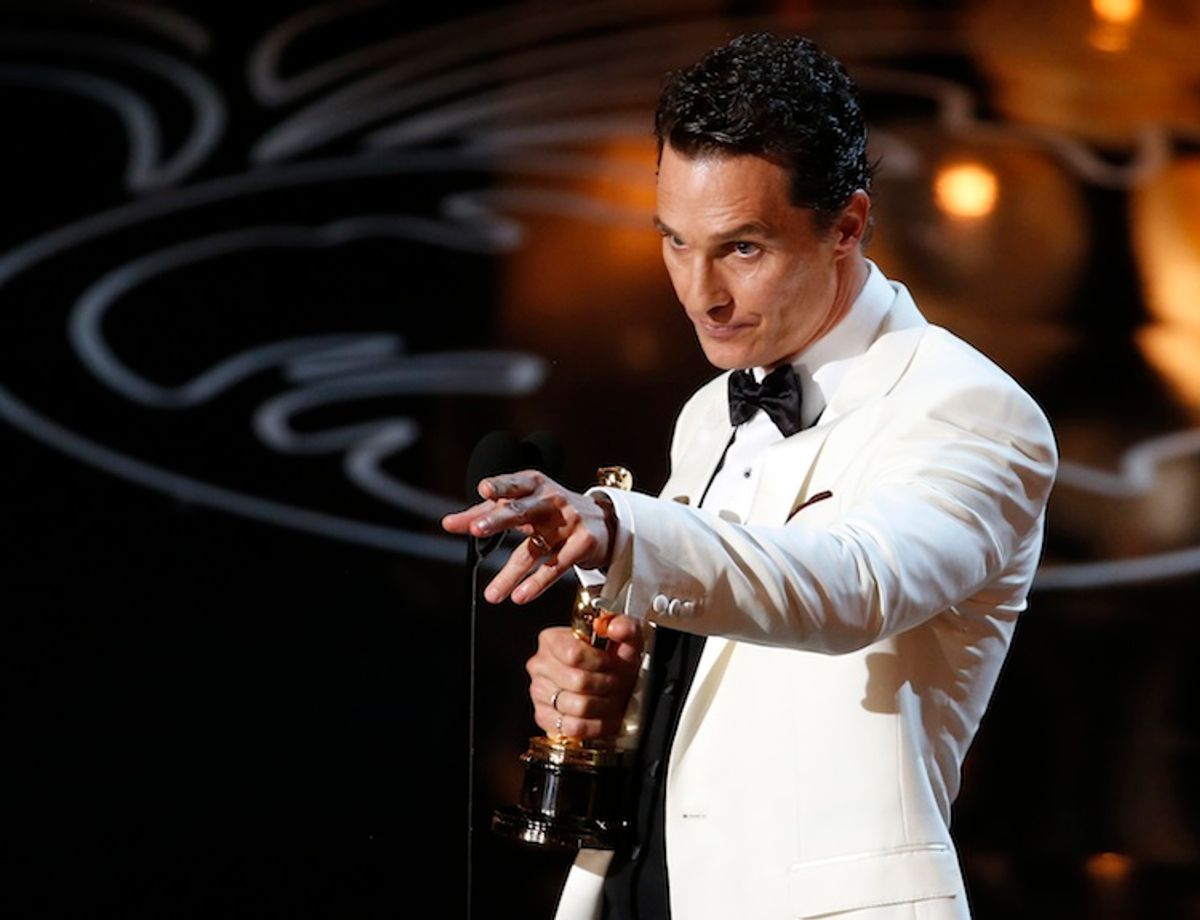 Matthew McConaughey accepts the Oscar for best actor for his role in "Dallas Buyers Club" at the 86th Academy Awards in Hollywood, California March 2, 2014. (REUTERS/Lucy Nicholson)
--

In many years, or most of them, the awards given out on Oscar night are almost an afterthought, and the entire point of the arduous evening once known as the Academy Awards (too many syllables! Sounds like school!) lies in the meta-spectacle: the weird in-jokes, the flubs, the gowns, the tearful sincerity, the generalized atmosphere of narcissism. Why else is the best-picture prize typically handed out in a panicked rush just before midnight strikes on the East Coast, while three hours earlier we’ve been made to sit through an extended second-rate comedy monologue, or some mysterious production number that seems to have been jointly devised by Richard Simmons and Marina Abramovic?

Even though the same template was observed this year, the 2014 Oscars may be mercifully remembered for who won what, rather than for Ellen DeGeneres’ labored pizza-delivery gag or the star-studded selfie that allegedly “broke Twitter” and may finally have convinced an entire generation of young Americans that social media is hopelessly lame. Mind you, DeGeneres was not half as terrifyingly bad as James Franco and Anne Hathaway were a few years ago, and did not piss off the entire universe the way Seth MacFarlane did last year. She has an affable, low-key delivery and she always seems calm and in control. She’s almost exactly like Billy Crystal, tuned 2.8 degrees cooler. She’s funny-ish, and she got Meryl Streep to say, “I’ve never sent a tweet!” (Seriously, are you surprised?) But she's not quite funny enough for three and a half hours of television.

Now, on the other hand: “Adele Nazeem,” or whatever the hell John Travolta called Idina Menzel – that was priceless. There were a lot of plastered, paralyzed, piss-poor introductions last night, but Travolta was doing OK – I’m including the fact that by that point in the evening we were all relieved to see a guy with too much plastic surgery – until he got to her name, realized he hadn’t a single fucking clue and hadn’t asked anybody about it, and just decided to wing it. “The beautiful! The talented! The amazing! Moomzbarhoomzibah.” (It’s amazing how bad skilled performers can be at that kind of thing. A couple of years ago I got to watch Robert De Niro give an award to Michel Hazanavicius, with similar results.)

Still, I just can’t resist Ellen’s glorious, glowing metaphor, since she just left it sitting there in the rain on Hollywood Boulevard. This Oscar night was a selfie, a goofy, drunken, zipper-down portrait that combined sheer silliness, painful earnestness and a bunch of people conspicuously trying to have fun. It captured a film industry divided between competing impulses, between pure entertainment, a retreat into technical isolation and an often clumsy or dunderheaded political engagement. It’s not quite fair to either “Gravity” or “12 Years a Slave” to claim that they represent anything specific, in ideological terms, but the pure-adrenaline, all-digital outer space thrill ride and the harrowing slavery saga clearly pulled Hollywood in different directions and (as most insiders predicted in the final days) the academy split the ballot. Alfonso Cuarón thus became the first Latino (and first Mexican) to win best director – one of many awards won by “Gravity” -- while Steve McQueen became the first black filmmaker to collect Hollywood’s biggest prize. (In a culture so obsessed with nomenclature as ideology, it’s not even surprising that several outlets described McQueen, who is British, as “African-American” in early tweets.)

As pedestrian and showbiz-professional as DeGeneres was, plenty of drama popped up throughout the broadcast. Cate Blanchett, the inevitable best-actress winner, got through the sentence in her rambling speech where she had to thank Woody Allen without incident. Right after that she tried to change the subject to “women’s movies,” which felt too much like some P.R. person’s brilliant idea. One aspect of the overheated news cycle these days is that it burns out quickly. We had a zillion Facebook flame wars about Woodygate, and last night was our official notification that all of that is over. Whatever you believe did or didn’t happen between Allen and his daughter 20-odd years ago, the truth will not be determined by plebiscite, Woody Allen will go on making movies (very likely bad ones) and things we cannot possibly know about for sure will go on being frustrating.

If there was a big loser last night it was David O. Russell’s “American Hustle,” which a few weeks ago struck many people (well, me) as a perfectly constructed Oscar movie with stars, costumes, comedy, music and just enough shreds of social relevance. It was nominated for 10 awards and won none, not quite breaking the 0-for-11 record apparently held by “The Color Purple.” There’s an interesting trajectory to trace there: Right now it feels as if the initial enthusiasm for Russell’s film faded quickly and it started to feel overly manufactured and a bit extraneous, next to a masterful technical construction that seemed to point the way toward Hollywood’s future and a challenging art film, made with old-fashioned craftsmanship, that served as a bracing corrective to its worst sins of the past.

Among the major awards, the only moderate surprise was Mexican-born, Kenyan-raised and American-educated actress Lupita Nyong’o winning the supporting actress prize for her role as the enslaved but unbroken Patsey in “12 Years a Slave.” (Jennifer Lawrence in “American Hustle” was seen as the favorite, even though Lawrence herself said she really didn’t need to win another Oscar right away.) Nyong’o came close to redeeming the entire broadcast by reminding us that Patsey is not exactly a fictional character but a representative of millions of women who lived and died in slavery and cannot tell us their stories. She was simultaneously composed, passionate, glamorous and humble. She’s a wonderful actress and she’s ready to be a movie star, and I think – and hope – that out in the audience we’re ready for that too.

While the “12 Years a Slave” team made a remarkable film, all does not seem to be harmony and light. Screenwriter John Ridley never thanked Steve McQueen, or engaged with the director in any way, when Ridley collected his prize for adapted screenplay. (McQueen applauded briefly but appeared not to rise from his seat.) Not long afterward, McQueen responded in kind, never mentioning Ridley among his long list of nervous thank-yous. Ridley appeared to be at the back of the group of people on stage for the best-picture presentation, about as far away from McQueen as he could get. Like most of you, I saw all of this on television and have no idea what’s going on; what I can say from experience is that McQueen is an awkward public speaker and a prickly guy who’s difficult to read. I will admit I’m dying to know what the beef may be between them – dudes, you both just won Oscars! – but they have successfully kept it out of the papers until now.

Moving from unexplained skulduggery to full-on alien invasion: Man, I love me some Matthew McConaughey when it comes to acting on the movie screen. All right all right all right! And I guess it’s the guy’s strange intensity that makes him so powerful when he’s playing a role. But can we have him not speak in public, please? What in the name of the living Christ was that? Was he auditioning for the Tom Cruise role in a remake of “Magnolia”? (“Give me that cherry pie!”) Or trying out his one-man, off-Broadway production of “Elmer Gantry”? Well, now we know that Mac’s hero is himself, endlessly receding 10 years into the future, becoming more spectral and insane until only his blinding white tuxedo jacket and his Cheshire-cat smile are left. At least he did not pretend that people in Ukraine give a crap. My hero is myself, five minutes into the future, when I don’t have to think about the Oscars again for, oh, almost six months.