Why Ellen is the perfect Oscar host

At the second most-watched TV event of the year, there's no shame in being a crowd-pleaser 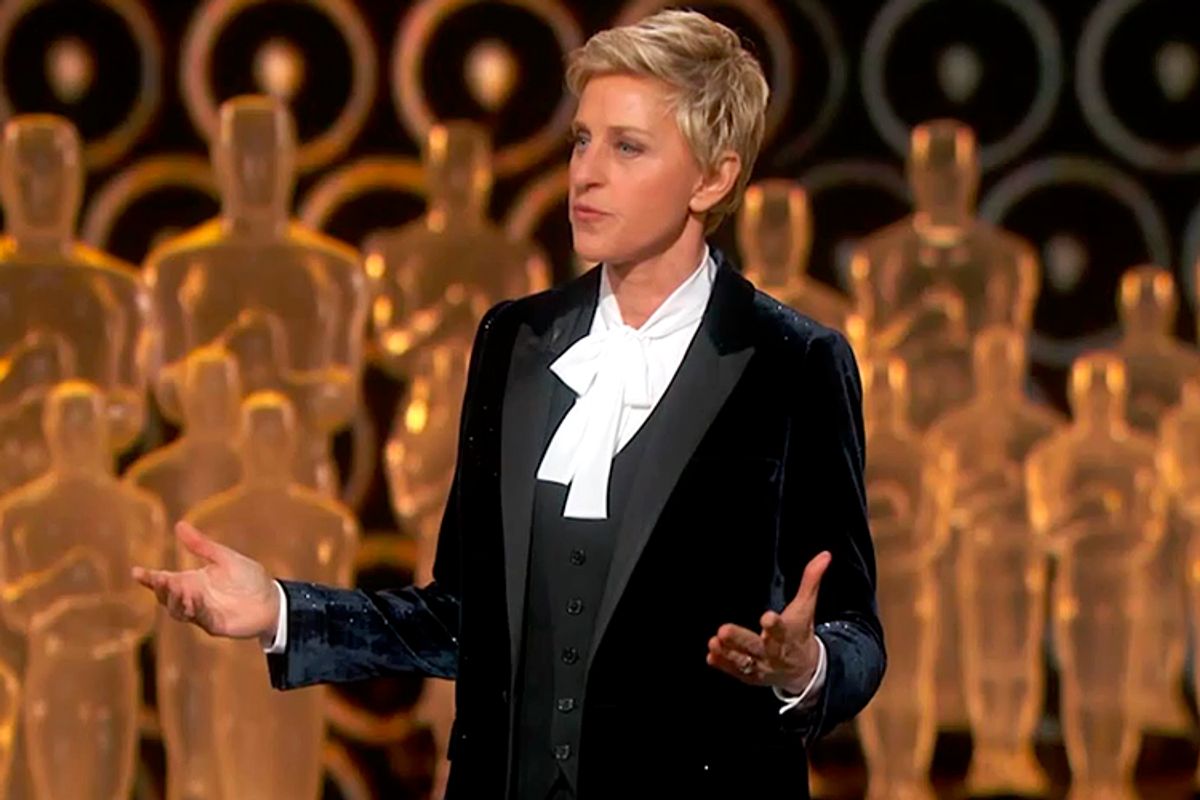 Up there with the vice-presidency, the job of Oscar host is one of the world's most thankless.

The ribald Whoopi Goldberg (a four-time host, if you can believe it) and the dead-eyed David Letterman have both been mocked for their respective reliance on costumery and acerbic humor, but the more recent history is even more gruesome. Chris Rock and Jon Stewart, two of the sharpest wits out there, both seemed, at once, out-of-touch with the evening's mood and slightly neutered. Hugh Jackman's song-and-dance act was well-executed but light on jokes.

But jokes can be risky, too! Billy Crystal, fondly remembered for his many stints in the 1990s and early 2000s, came to rescue the 2012 ceremony after Eddie Murphy quit and got pilloried for blackface humor that might have been a little more widely accepted in the '90s, or the '20s. Crystal's booking had been a reaction against the previous year's show, when the academy had been trying to court a younger audience with hosts James Franco and Anne Hathaway (you may recall how that turned out); the year after Crystal, the academy tried to go young again with host Seth MacFarlane, whose tasteless humor seemed a deeply poor fit for the room.

This year's host is unlikely to reprise MacFarlane's "We Saw Your Boobs" number -- it's Ellen DeGeneres, the amiable daytime host who last had the gig in 2007. Oscar hosts are usually asked back, if they're going to be, within only a couple of years, and it seemed a fair presumption that Ellen would keep dancing on daytime TV exclusively. But the seven years since DeGeneres' perfectly competent gig have seen enough host-related tsuris that, finally, "perfectly competent" seems good enough.

In her first hosting turn, DeGeneres offended no one, though she did nothing exceptional. Her 2007 opening monologue had more truisms about what the Oscars are generally like than it did specific references to any of the year's nominees, and as such felt both offensive to no one, and sort of soft. It perfectly matched DeGeneres' real-life persona, one so familiar that it's weird to call her "DeGeneres" instead of plain old "Ellen." The talk-show host's monologues lightly touch on the absurdities of life, and her interviews are even softer than her awards-show jokes. Her Twitter feed, which has some 25 million followers, is mainly her saying hi to celebrities or making wince-inducing puns like "It's a beautiful (Daniel) Day (Lewis)! Only 3 more until the Oscars."

DeGeneres has styled herself as the safest thing going: She's not abrasive to the more sensitive of sensibilities, like Rock, Stewart or MacFarlane. She's not liable to offend anyone as would Goldberg or Crystal. She's very good at telling jokes, but those jokes are so inclusive as to be amiably unspecific.

But that may be exactly what the Oscars need. Even the most successful of awards-show hosts at other ceremonies -- which is to say, the Golden Globes' Tina Fey-Amy Poehler pairing -- would likely seem mean-spirited on the Oscars' stage. Whether the viewer takes the ceremony seriously or not, the ceremony takes itself seriously, and the pomp of the whole thing isn't the sort that can be deflated by a sassy or snarky host. Instead, it tends to eat whole those hosts who don't pay sufficient tribute to their surroundings. Whatever one may think of the Oscars, the ceremony is some eight decades old and has honored everything from "Casablanca" to "All About Eve" to "The Godfather." You don't have to like it, but to mock it from beneath the proscenium is a good way to look unimpressive by comparison.

DeGeneres herself could be a more impressive comedian; someone with so much early promise guaranteeing herself a lucrative career by gently asking movie stars what's up these days and if it's time to roll a clip is somewhat dispiriting. The difference between DeGeneres' notoriously great 2001 Emmys gig and her 2007 Oscars is the difference between a comic going for broke and one who's realized going for a safe payday is a bit easier. Somewhere beneath the tweets about what a beautiful Daniel Day-Lewis today is, there's a sharper and more observant comedian.

But that comedian would be a terrible Oscar host. What people who complain about the host or the dance numbers or the long speeches at the Oscars fail to recognize is that the second-most-watched broadcast of the year is being watched by people unlike themselves. It's designed to be as appealing to as many as possible, which means that everyone is going to find parts of it a little dull. That's the contract you sign when you view a live event broadcast to a large audience -- not all of it is going to be uproarious to you, but presumably something will be interesting enough to keep you watching.

For all the flak Oscar hosts get, it's remarkable how small the job is; they deliver an opening monologue, then disappear for quite some time, reappearing either for a production number or simply to introduce various presenters. If we must have an Oscar host, Ellen is the perfect one. She will be fine, just fine, in her opening monologue -- no one doesn't like her! -- and more important, she will be forgettable. A host who's the most memorable part of an evening with both huge celebrities and untrained, un-camera-ready sound technicians giving extemporaneous speeches is a host who's goofed up. Ellen is, finally, a pro. Fans of edgy comedy would be advised to watch Louis C.K. on YouTube on Sunday night; the rest of us can wait out the monologue, which will almost certainly have the right, and rightly boring, mix of gentle ribbing and reverence.