Whether they know it or not, white women who practice belly dance are engaging in appropriation 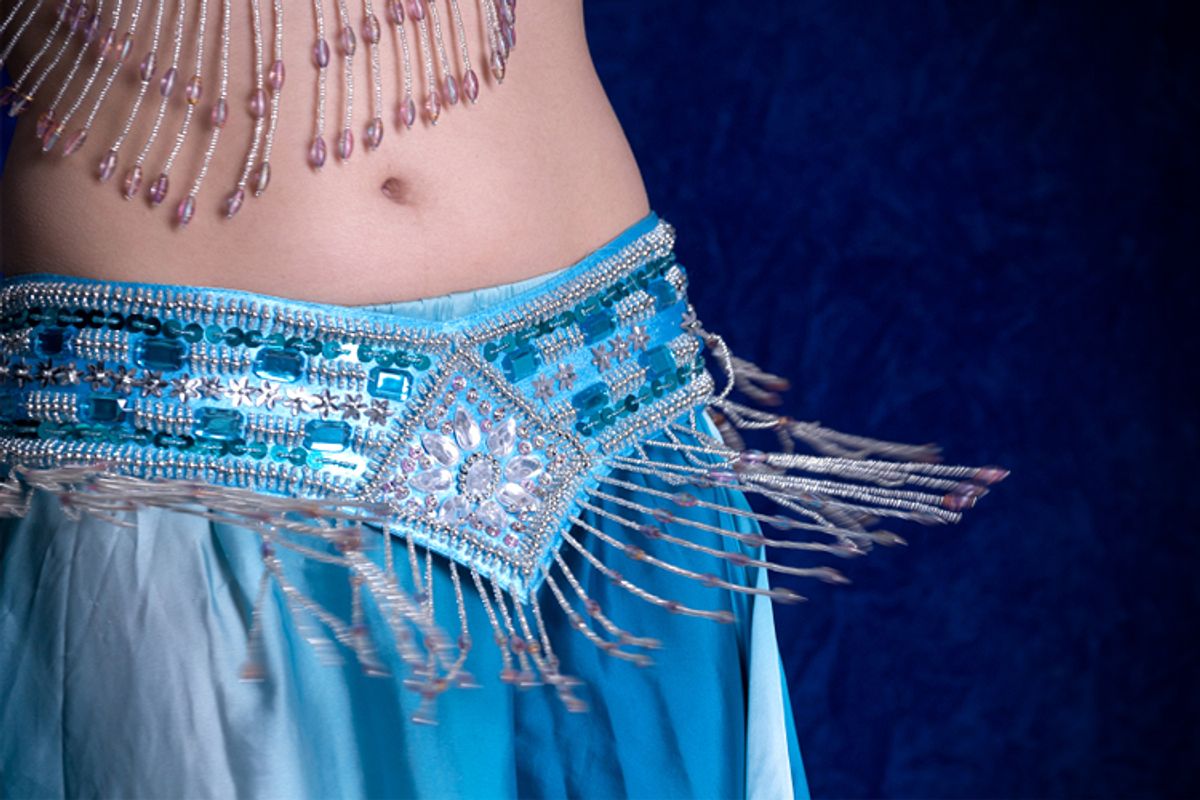 Google the term "belly dance" and the first images the search engine offers are of white women in flowing, diaphanous skirts, playing at brownness. How did this become acceptable?

The term "belly dance" itself is a Western one. In Arabic, this kind of dance is called Raqs Sharqi, or Eastern dance. Belly dance, as it is known and practiced in the West, has its roots in, and a long history of, white appropriation of Eastern dance. As early as the 1890s in the U.S., white “side-show sheikhs” managed dance troupes of white women, who performed belly dance at world's fairs (fun trivia: Mark Twain made a short film of a belly dancer at the 1893 fair). Many white women who presently practice belly dance are continuing this century-old tradition of appropriation, whether they are willing to view their practice this way or not.

Growing up in the Middle East, I saw women in my community do Raqs Sharqi at weddings and parties. Women often danced with other women, in private spaces, so that this dance was for each other. When they danced at house parties with men in attendance, the dynamic shifted. When women danced for women alone, there was a different kind of eroticism, perhaps more powerful, definitely more playful, or maybe that’s how it felt to me, as a child and teenager, wary of men’s intentions. At weddings the dancing was celebratory and flirty and beautiful, something a professional dancer would come in to do, and something that everyone else would continue engaging in. If there was a drummer present, all the better. At my wedding, I was my own dancer. I hired a band that specialized in Arabic music and danced with my family and friends, not all of whom were Arab.

One of the most awkward occurrences for me when I go out to an Arabic restaurant is the portion of the evening when the white belly dancer comes out. This usually happens on weekends, and I’ve learned to avoid those spaces then, but sometimes I forget. The last time I forgot, a white woman came out in Arab drag — because that’s what that is, when a person who’s not Arab wears genie pants and a bra and heavy eye makeup and Arabic jewelry, or jewelry that is meant to read as “Arabic” because it’s metallic and shiny and has squiggles of some kind — and began to belly-dance. She was not a terrible belly dancer. But she was incredibly thin and didn’t remind me, in any way, of Tahia Karioca or Hind Rostom or my absolute favorite Raqs Sharqi dancer, Fifi Abdo. Abdo used to dance in the expected bra and skirt but later danced mostly in robes that were somewhat shapeless and more traditional — a kind of relaxed housewear- streetwear dress that folks in Egypt rock daily. There are videos of her in these robes dancing at weddings and smoking sheesha while she dances. When I am having a particularly lousy day, I watch this video of her and dance along.

At a movie theater in Cairo in 2007, I argued with a male friend about why the lead actress wore a strange, baggy dress underneath a bra-and-skirt dancing ensemble. He suggested that she was uncomfortable with her body; I suggested that the country was becoming more conservative and she was too much of a media darling to appear with her skin exposed. Years later, the revolution happened, or tried to happen, and when the Muslim Brotherhood took over, and Western news outlets began publishing stories that claimed belly dancing was a dying art. Tell that to the women on the streets and on rooftops and in bedrooms and living rooms and weddings dancing their hips off. (See this video, for example, of actual working-class Egyptian women of all sizes and ages dancing in the streets.)  The one interesting thing about these stories is that they reported that Western, or white women, were beginning to take over gigs in Egypt. These women moved there out of an obsession with belly dance and are now appropriating it from local dancers.

“It’s Arab face,” my friend Nadine once said, pointing at an invitation from a white acquaintance of hers. The invitation was printed on card stock and featured the woman and a dozen of her white friends dressed in Orientalist garb with eye makeup caked on for full kohl effect and glittery accessories. We wanted to call these women up and say, “How is this OK? Would you wear a dashiki and rock waspafarian dreads and take up African dance publicly? Wait,” we’d probably say, “don’t answer that.”

The most disturbing thing is when these women take up Arabic performance names -- Suzy McCue becomes Samirah Layali. This name and others like it make no sense in Arabic. This, in my estimation, completes the brownface Orientalist façade. A name. A crowning. A final consecration of all the wrongs that lead up to the naming.

Women I have confronted about this have said, “But I have been dancing for 15 years! This is something I have built a huge community on.” These women are more interested in their investment in belly dancing than in questioning and examining how their appropriation of the art causes others harm. To them, I can only say, I’m sure there are people who have been unwittingly racist for 15 years. It’s not too late. Find another form of self-expression. Make sure you’re not appropriating someone else’s.

When I have argued, online and in person, with white women belly dancers, they have assured me that they learned to dance from Arab women and brown women. This is supposed to make the transaction OK. Instead, I point out that all this means is that it is perfectly all right with these teachers that their financial well-being is based on self-exploitation. As a follow-up, white belly dancers then focus on the sisterly and community aspect of belly dance. They claim that the true exploiter of belly dancing is Hollywood, and the Egyptian film industry, which helped take belly dancing out of women’s homes and placed it directly under the male gaze. Here, the argument white belly dancers try to make ignores the long history of white women’s appropriation of Eastern dancing and becomes that this, the learning and performance of belly dance, is not about race and appropriation, but about gender and resisting the patriarchy and how all of us belly dancing together is a giant middle finger to men and their male gaze-y ways.

But, here’s the thing. Arab women are not vessels for white women to pour themselves and lose themselves in; we are not bangles or eyeliner or tiny bells on hips. We are human beings. This dance form is originally ours, and does not exist so that white women can have a better sense of community; can gain a deeper sense of sisterhood with each other; can reclaim their bodies; can celebrate their sexualities; can perform for the female gaze. Just because a white woman doesn’t profit from her performance doesn’t mean she’s not appropriating a culture. And, ultimately, the question is this: Why does a white woman’s sisterhood, her self-reclamation, her celebration, have to happen on Arab women’s backs?