Gentrifying the dharma: How the 1 percent is hijacking mindfulness

As big corporations embrace meditation, some Buddhists fear their religion's being co-opted by elites 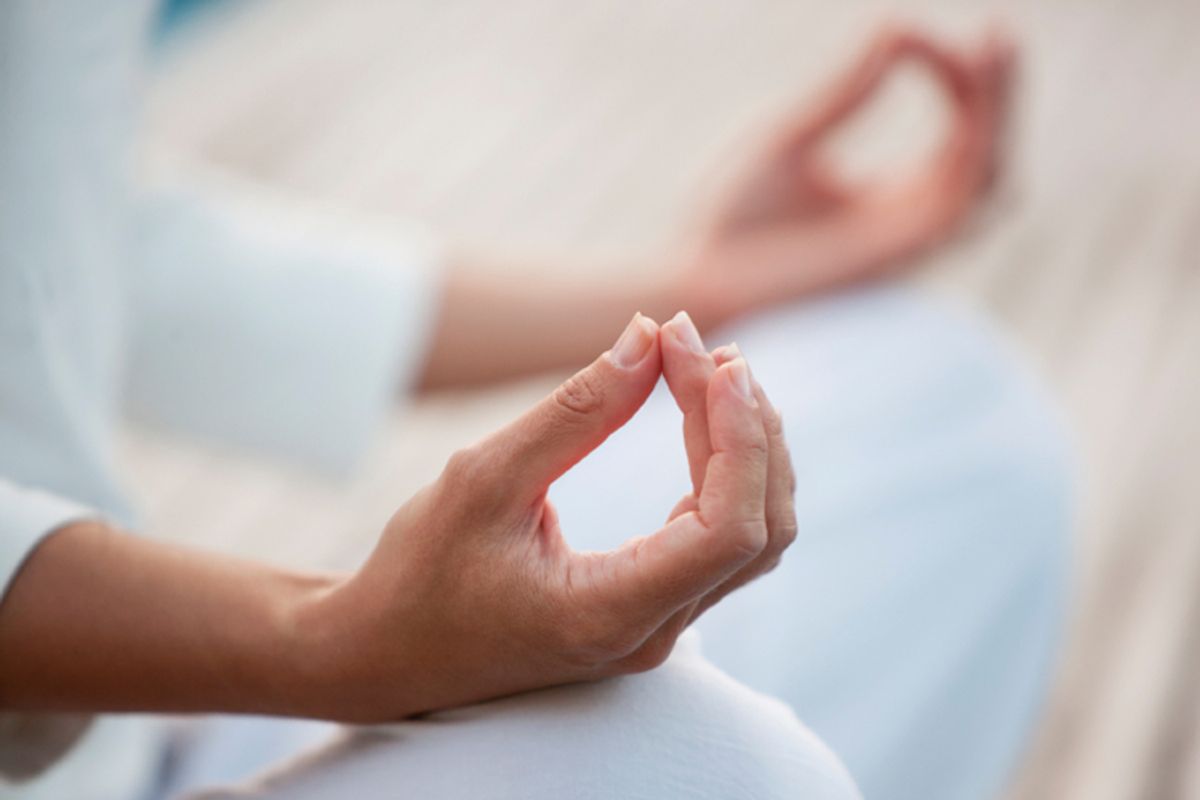 The protesters looked anxious as they rode down the escalator in San Francisco’s Marriott Marquis. A yoga bag slung over one of their shoulders hid a banner reading “Eviction Free San Francisco.” Another had a bullhorn tucked into her backpack. Two reached out to touch an inflatable, neon-blue lotus as they walked toward the conference hall.

They were there to disrupt “Three Steps to Build Corporate Mindfulness the Google Way,” a panel on Google’s corporate mindfulness program at the 2014 Wisdom 2.0 conference. As the panelists began their introduction, protesters walked onstage, unfurled their banner, and began chanting “Wisdom Means Stop Displacement; Wisdom Means Stop Surveillance; San Francisco: Not For Sale!”

The conference itself is an annual gathering of life coaches, tech elites and spiritual teachers now in its fifth year. It bills itself as a “conversation about the merging of wisdom and technology,” and topics range from mindful business and leadership to social entrepreneurship and innovation. Past speakers have included Buddhist teacher Sharon Salzberg, Twitter founder Biz Stone and Rwandan president (and possible war criminal) Paul Kagame. It even got its own “What to Wear” column at Forbes.

Ire at Google buses, tech-driven gentrification in San Francisco and Silicon Valley’s close collaboration with the NSA has been all over the news, but the demonstration at Wisdom 2.0 was different. It wasn’t just aimed at the tech industry; it was also aimed at what some see as an elitist streak in American convert Buddhism.

“Most of the workshops offer lifestyle and consumer choices that are meant to help people heal from the harm, emptiness and unsustainability associated with living under capitalism, but [they do so] without offering an analysis of where this disconnection comes from,” Amanda Ream, one of the disruption’s organizers, writes in a blog post for Tricycle Magazine explaining why she disrupted the conference. “The conference presents an evolution in consciousness of the wealthiest among us as the antidote to suffering rather than the redistribution of wealth and power.”

Buddhism first came to the U.S. with Japanese and Chinese immigrants. It enjoyed a brief period of popularity among urban elites around the turn of the century, but the current wave of convert popularity began in the 1960s. Today there are about 3 million to 5 million Buddhists in the United States, about 70 percent of whom are Asian-Americans. The remaining 30 percent tend to be white, middle-aged, highly educated and solidly middle to upper class.

Interaction among Buddhism, neuropsychology and the self-help movement has also launched a constellation of publications, gurus, life coaches and conferences that make up the mindfulness movement. Its proponents tout yoga, mindfulness and meditation as panaceas, good for everything from managing stress and increasing longevity to turning around poor urban schools and establishing world peace, all one breath at a time.

Corporate America has embraced mindfulness as a way to raise bottom lines without raising blood pressure -- much to the chagrin of people like Ream, who feel that Buddhism’s message is much more radical.

Of course, Ream’s criticism is nothing new. Marxist philosopher Slavoj Žižek has long argued that “Western Buddhism,” as he calls it, is an ideal palliative for the stresses of life under late capitalism -- their “perfect ideological supplement.”

“It enables you to fully participate in the frantic pace of the capitalist game,” Žižek explains in a 2001 essay for Cabinet magazine, “while sustaining the perception that you are not really in it; that you are well aware of how worthless this spectacle is; and that what really matters to you is the peace of the inner Self to which you know you can always withdraw.”

“Now, after sort of listening yesterday and also today, particularly today, I developed more respect about capitalism,” the Dalai Lama said after a question from Brooks about protecting individual property rights. “Otherwise, just my impression, capitalism only takes the money. Then, exploitation.” The other panelists were less ambivalent, regularly calling free enterprise a “blessing,” a “miracle” and a “savior” throughout the event.

In 1955, Mao Zedong reportedly told a 19-year-old Dalai Lama that “religion is poison.” Both Mao and Žižek’s criticisms of Buddhism are rooted in Marx’s well-known quip that religion is “the opium of the people,” an intoxicant that keeps workers from seeing how capitalism exploits their labor. But many Buddhists now fear their religion is turning into a designer drug for the elite.

Some are fighting back against this trend. Katie Loncke at the Buddhist Peace Fellowship wrote a passionate defense of the Wisdom 2.0 disruption. The country’s largest Buddhist publication, Tricycle, has moved toward covering more social and political issues. And many great American teachers -- Bhikkhu Bodhi, Danny Fisher, Justin Whitaker, Shodo Spring and Mushim Ikeda, to name just a few -- are working to articulate Buddhist challenges to injustice.

Still, they are few and far between. Most American converts still see Buddhism as a path to individual spiritual development through meditation. Few convert groups focus on building fellowship and camaraderie, engaging families or getting involved in their local community. Even fewer regularly do service work, much less activism. In that environment, groups like the Buddhist Peace Fellowship and Buddhist Global Relief often struggle for support.

“Just like the gentrification of a neighborhood where new, wealthy people displace people who have lived there longer,” Ream writes, “the dharma is undergoing a process of gentrification in San Francisco today.”

Powerful, well-funded institutions want to invest in Buddhism. They’ve been eyeing the neighborhood for ways to manage employee stress and put a more compassionate face on free trade. The only question is whether the current tenants will band together to disrupt them.