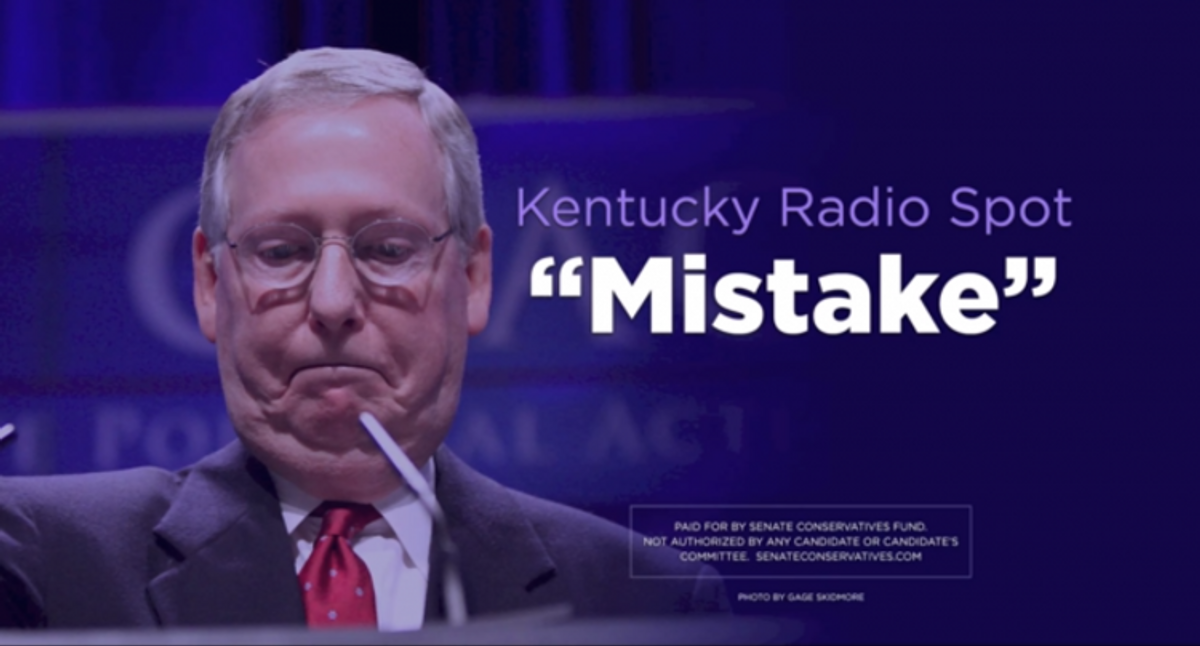 In the wake of U.S. District Judge John G. Heyburn II's ruling that Kentucky's ban on recognizing same-sex unions from other states is unconstitutional, gay marriage has suddenly become a major issue in the conservative Bluegrass State.

It's happening on both sides of the aisle, too. On the Democratic side, Kentucky's Dem attorney general, Jack Conway, recently announced he would not personally represent the state in its appeal (outside counsel will instead). For Republicans, meanwhile, the issue has become most prominent through a radio ad from the Senate Conservatives Fund, a Tea Party group that's backing Sen. Mitch McConnell's primary opponent, businessman Matt Bevin.

In the ad, two assumedly regular Kentucky Republicans discuss Heyburn's ruling, describing the George H.W. Bush-appointed judge as "liberal" and blaming McConnell for recommending him way back in the early 1990s.

"Unbelievable! Liberal Judge John Heyburn just ruled that Kentucky has to immediately recognize same-sex marriages from other states," says an unnamed woman in the beginning of the ad.

"Is that the same judge who overturned the ban on partial-birth abortions?" asks a man in response.

"Who recommended this liberal judge?"

After claiming that McConnell "praised" Heyburn for being "progressive," the woman explains McConnell's shocking support of the far-left Republican-appointed judge by alleging the Kentucky senator did it because of "cronyism."

"Heyburn donated money to McConnell," she says, "and served as a county chairman for his campaign."

The two then agree that McConnell should apologize for this ideological transgression and try to place it in a broader context of McConnell's secret liberalism.

"First it was funding Obamacare, then it was giving Obama a blank check to raise the debt ceiling, now it’s liberal judges," the woman says. "I’m voting for conservative Matt Bevin instead."

For all its bluster, though, the McConnell campaign doesn't seem to be taking the ad particularly seriously. And considering a recent poll shows the incumbent fending off his Tea Party challenger by an amazing 42 points, why should they?

"This is the kind of ad voters expect to hear from people who are days away from boxing up their personal effects and auctioning off the remaining printer cartridges in the office," said Allison Moore, a spokesperson for the McConnell campaign.

You can listen to the ad below: