With the right-wing confab starting today, here are some golden oldies -- like comparing gay people to alcoholics 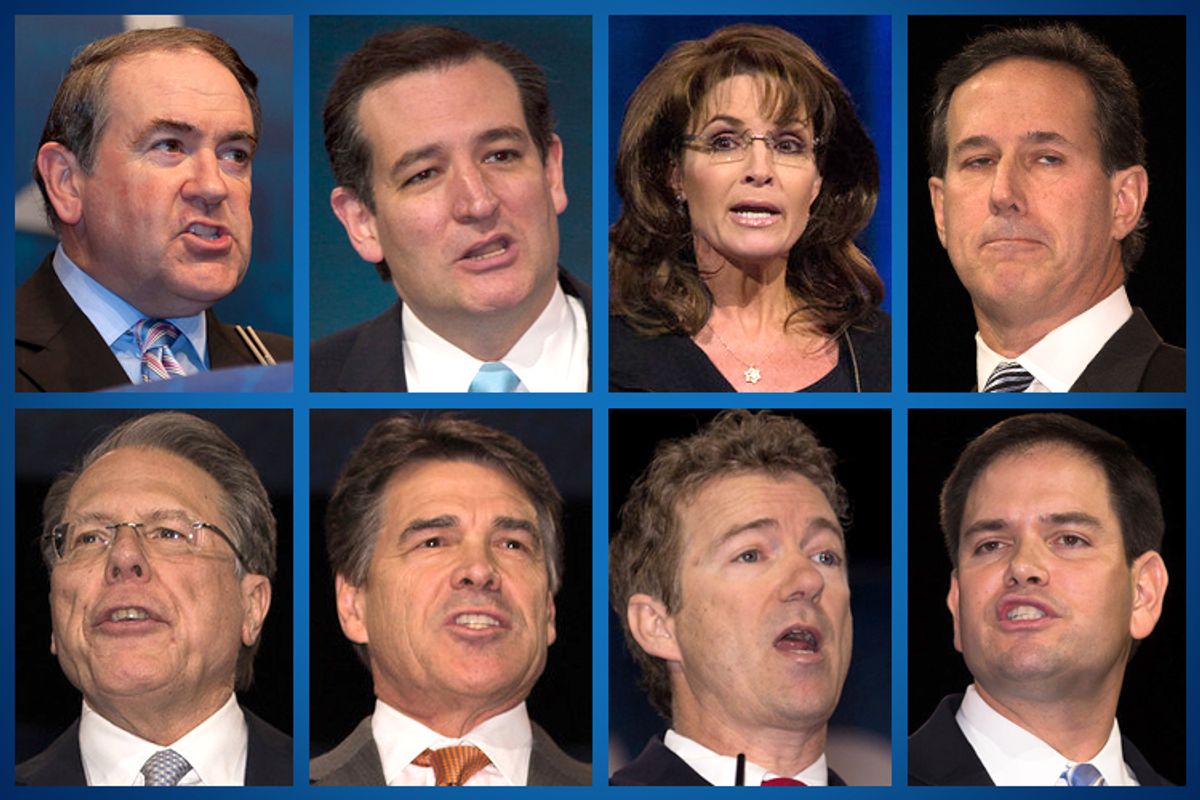 Starting today, conservative activists converge in Maryland – along with a healthy complement of journalists (this one included) – to hear from top Republicans and leading voices of the modern right. Controversy is basically inevitable.

But CPAC's top stars will have a high bar to clear if they want to outdo themselves in the provocation department. Here are some head-turning past comments from headliners highlighted on CPAC’s site -- on black people, gay people, "takers" and much more:

“After Hurricane Sandy, we saw the hellish world that the gun prohibitionists see as their utopia.” – Wayne LaPierre, 2013

“One of the things I will talk about, that no president has talked about before, is I think the dangers of contraception in this country … It’s a license to do things in a sexual realm that is counter to how things are supposed to be.” – Rick Santorum, 2011

“Probably the most heartwarming experiences I’ve had over the last several days is when naturalized American citizens, who have immigrated here from Germany, Iran, and other countries, they come up to me and they say: Why are we doing what so many have fled from? … [T]hese people who’ve lived under socialist type economies, and totalitarianism, they know where we’re headed if we don’t turn things around.” – Jim DeMint, 2009

“You know, something may go down tonight, but ain’t gonna be jobs, sweetheart.” – Chris Christie, 2012

“[I]f we can redefine marriage … based on social pressures as opposed to between a man and a woman, we will continue to redefine it in any way that we wish, which is a slippery slope with a disastrous ending, as witnessed in the dramatic fall of the Roman Empire.” – Ben Carson, 2012

“A president who is not bound by the law is no longer a president. And if you love liberty that should concern you greatly.” – Ted Cruz, 2014

“Having a dozen people murdered in a [Aurora] movie theater gets our attention … Ultimately, we don’t have a crime problem, a gun problem or even a violence problem. What we have is a sin problem. And since we’ve ordered God out of our schools, and communities, the military, and public conversations, you know we really shouldn’t act so surprised when all hell breaks loose.” – Mike Huckabee, 2012

“The Constitution doesn’t give Congress the power to redistribute our wealth.” – Mike Lee, 2010

“The trend in deregulation, beginning in the early 1980s, is one of the biggest reasons for the sustained economic expansion. I would like to see us continue to deregulate on many fronts, including the financial services industry.” – Pat Toomey, 1999

“It is a messed up situation when Miley Cyrus gets a laugh, and Phil Robertson gets suspended.” – Bobby Jindal, 2013

“Right now about 60 percent of the American people get more benefits in dollar value from the federal government than they pay back in taxes. So we’re going to a majority of takers versus makers in America and that will be tough to come back from that. They’ll be dependent on government [rather] than themselves.” – Paul Ryan, 2010

“Terrorism kills, and Barbara Boxer is worried about the weather.” – Carly Fiorina, 2010

“We need to know, for example, whether [Sonia Sotomayor]’s going to be a justice for all of us, or just a justice for a few of us.” – John Cornyn, 2009