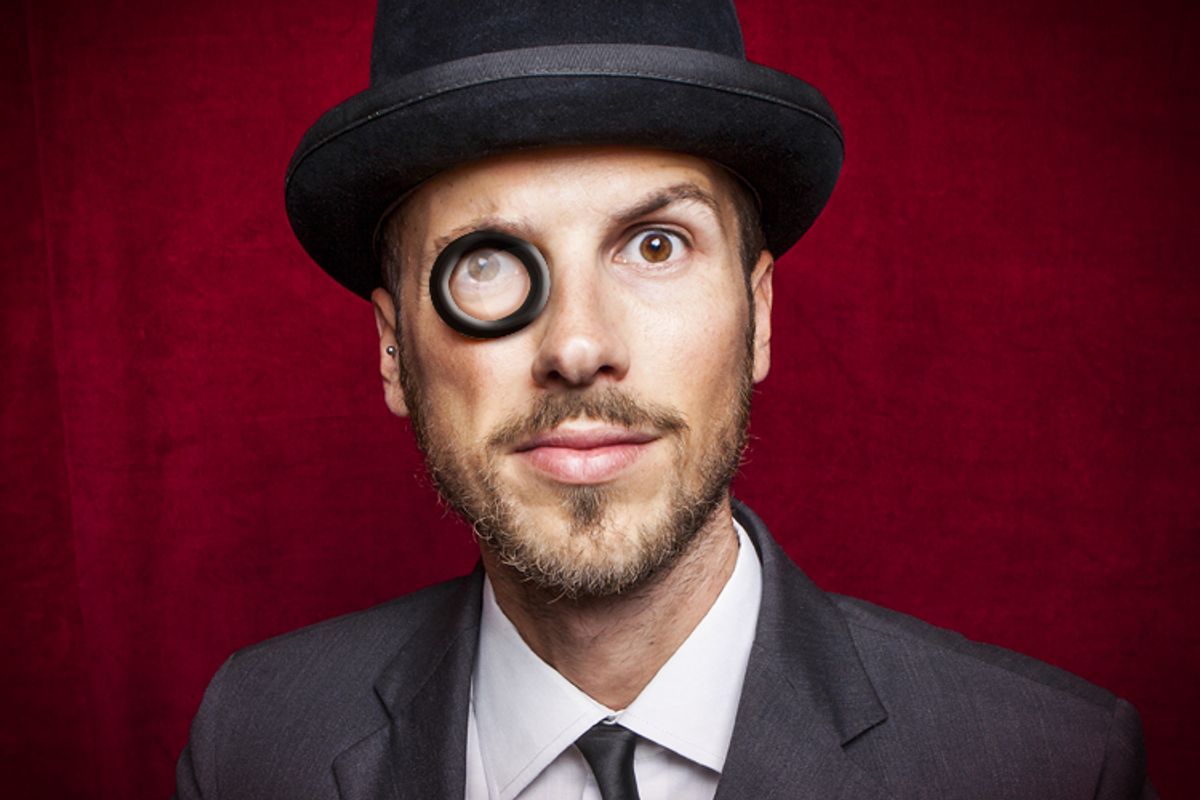 I swear to God sometimes I think the New York Times is just messing with us. Now it's monocles. Really? I wonder if they don't just routinely stare out the window, fix their attention on the first random thing they see or hear, decide that it's a trend, and then take bets on whether we'll fall for it.

Many years ago, when I very occasionally wrote a few Styles pieces, I had an editor there ask if I had noticed a sudden vogue for carnations, and if the subject was worthy of further exploration. Carnations. And sure, I nodded indulgently two years ago, when they declared "man buns" a thing. I didn't question its sanity when they said that an outbreak of "linguistic shoplifting"  was making Britishisms happening. A friend of mine once wrote the definitive story on eyelashes for them. I've watched them fret over baby name anxiety that leaves prospective parents "paralyzed" with fear, and announce "the midwife as a status symbol for the hip." And when, just a few weeks ago, they did a piece on the decline of the Brazilian, in a story that included the phrase "in full pubic bloom," I said, "I could already have told you so, Styles section!" But I would like to draw the line at this monocle business. I would like to draw the line right there.

In a Wednesday story with the only-in-the-Times headline "One Part Mr. Peanut, One Part Hipster Chic," Times writer Allen Salkin explains, "From the trendy enclaves of Berlin cafes and Manhattan restaurants to gin ads and fashion magazines, the monocle is taking its turn alongside key 21st-century accouterments like sharply tucked plaid shirts and certificates in swine butchering." Salkin then goes on to offer further compelling evidence that we are living in the age of "would-be gentlemen seeking to emulate the stern countenances of their stuffy forebears." Okaaaaaay.

As the Times notes, the monocle has recently shown up on such prominent faces as those of Alan Cumming and rapper Jose Vega. Ultracool eyeglass retailer Warby Parker now prominently peddles a "Colonel" monocle it says is "the perfect accessory for budding robber barons, post-colonial tyrants and super villains." (Not mentioned: insufferable dweebs.) And if you want further proof of the rise of the monocle, just do an Etsy search. Best anecdote in the whole Times story? It's a tie between the "trend forecaster" who reports seeing an entire group of Cape Town men sporting monocles "along with tiny brass telescopes kept in satchels" and the news that "clubby" restaurant NoMad offers monocles to patrons to assist them in reading the menu in its dim lighting. Hang on a sec – I have to go laugh my butt off.

The monocle, in much the same way that white girls wearing bindis was a thing for a while in the '90s, is a perennial attention getter – a defiant dare in the middle of your face. I don't dispute that. I am of the generation that watched Madonna flash a monocle in the "Express Yourself" video and Winona Ryder rock one in "Heathers," and briefly entertained the notion that we too could pull it off. Sadly for Generation X, we instead wound up pledging our allegiance to Team Scrunchie. So in hindsight, I get that the monocle should be having a moment again right now. It does somehow seem the exact right accompaniment for someone already in possession of an ironic mustache, or hoping to emulate, as cultural historian Toby Miller notes to the Times, a "London lesbian in the 1920s." At least we're not bringing trucker hats back just yet.

And I get that it's the job of the Times Styles section to write about what's bubbling up in fashion. But you've got to wonder if sometimes they're reaching just a tad, with their delightfully understated admission that "monocles are hardly everywhere." Walk around New York City right now. Filthy, poop-strewn, weeks-old snow -- now THAT is everywhere. Can I do a trend piece on it?

Frankly, I'm going to ride this whole single lens thing out. Where I'm from, the only thing likelier to get you face-punched faster than a Google Glass would have to be a monocle. I meanwhile continue to eagerly wait for the day when Walgreens readers on a chain and second-day unwashed hair are going to be deemed New York Times-worthy hot. Because I am totally prepared for that one.