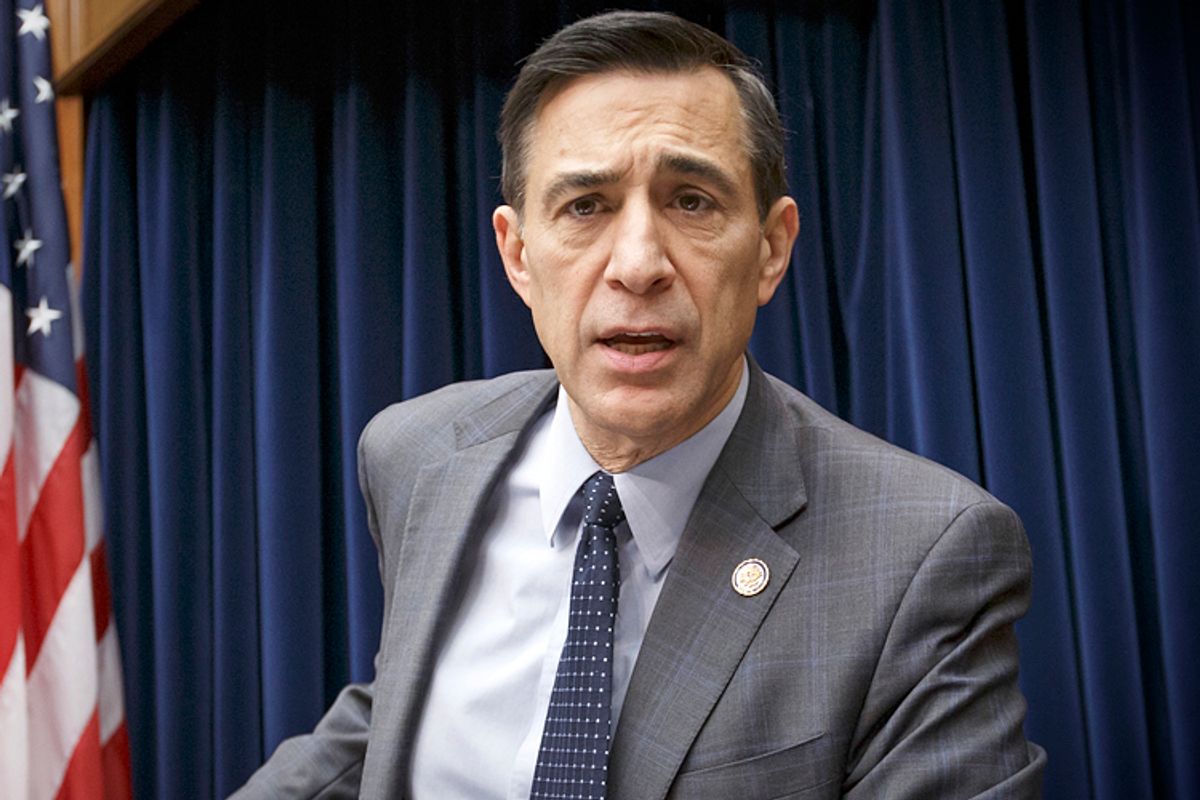 The farce that is Rep. Darrell Issa continues. He put on an amazing spectacle shutting down the ranking member of the House Oversight Committee, Elijah Cummings, on Wednesday, repeatedly cutting off Cummings' microphone and, finally, turning his back and walking away. I especially loved Issa’s little gesture pulling his finger across his throat like a knife, to cut the mic a second time. I called it “thuggish” on "Politics Nation" and folks on the right aren’t happy. That’s OK; it was thuggish.

Issa had once again called former IRS supervisor Lois Lerner to testify before the committee, knowing she was going to again use her Fifth Amendment right against self-incrimination. But what Issa didn’t reveal is that Lerner’s attorney had offered last month to share her answers to the committee’s questions via what’s called a “proffer.” That’s when the subject of an investigation reveals the rough outlines of what they know, which can also help determine whether they deserve immunity from prosecution (in order to get them to share more). But Issa rejected the proffer and staged a show trial designed to have Lerner take the Fifth again, in front of television cameras and a packed hearing room.

Cummings asked for time to make a statement, once Issa announced himself satisfied that Lerner wouldn’t testify Wednesday and tried to adjourn. That’s when Issa cut his mic.

"I am a member of the Congress of the United States of America. I am tired of this!" Cummings replied, though his mic was off. "You cannot just have a one-sided investigation. There is something absolutely wrong with that. It is absolutely un-American … Chairman, what are you hiding?”

On “Politics Nation” Wednesday committee member Rep. Eleanor Holmes Norton explained Cummings was going to ask about Lerner’s attorney’s proffer, and that was why Issa shut him down. Issa was trying to “keep us from revealing that we could have learned exactly what [Lerner] would have said,” Norton explained. Cummings’ office confirmed her account.

So why would Issa reject that proffer if he was committed to learning the truth about the IRS “scandal”? Because from the beginning he’s known it wasn’t a scandal. From the beginning Issa has selectively leaked testimony and other evidence from his committee’s investigation to Fox News – which he treats as a fourth arm of government -- consistently distorting the facts.

We now know that IRS staffers, overwhelmed by post-Citizens United political activism, used certain terms to screen groups on the right and the left to make sure they deserved tax-exempt status. Groups with “Tea Party” or “Patriots” in their names, as well as “Occupy” or “Blue,” were flagged for special scrutiny. So far the only known group to lose its tax exemption was a Democratic group, Emerge America, which works to elect Democratic women to public office.

But over and over again, Issa has leaked one-sided testimony designed to show a bias against conservatives. Over and over Cummings has asked him to make public all of the testimony and evidence gathered by their committee, only to have Issa refuse. A few times Cummings has himself released testimony, including that of a self-identified “conservative Republican” manager of an IRS screening group who said no one from the Obama administration had anything to do with the selection of Tea Party groups for scrutiny.

Issa showed remarkable contempt for Cummings on Wednesday, but he also showed contempt for the American people. Issa’s investigation has cost at least $14 million, and eaten up 97,542 hours of IRS staffers’ time. The agency has coughed up more than 500,000 pages of documents; 35 former and current IRS employees have sat for interviews. Treasury and IRS officials have testified at 15 separate congressional hearings. After all of that, a leader who wanted the truth would have listened to what Lerner had to say through her attorney. That’s not what Issa’s after. He’s trying to shame the White House, and Cummings makes a great stand-in.