5 myths about the Venezuela crisis 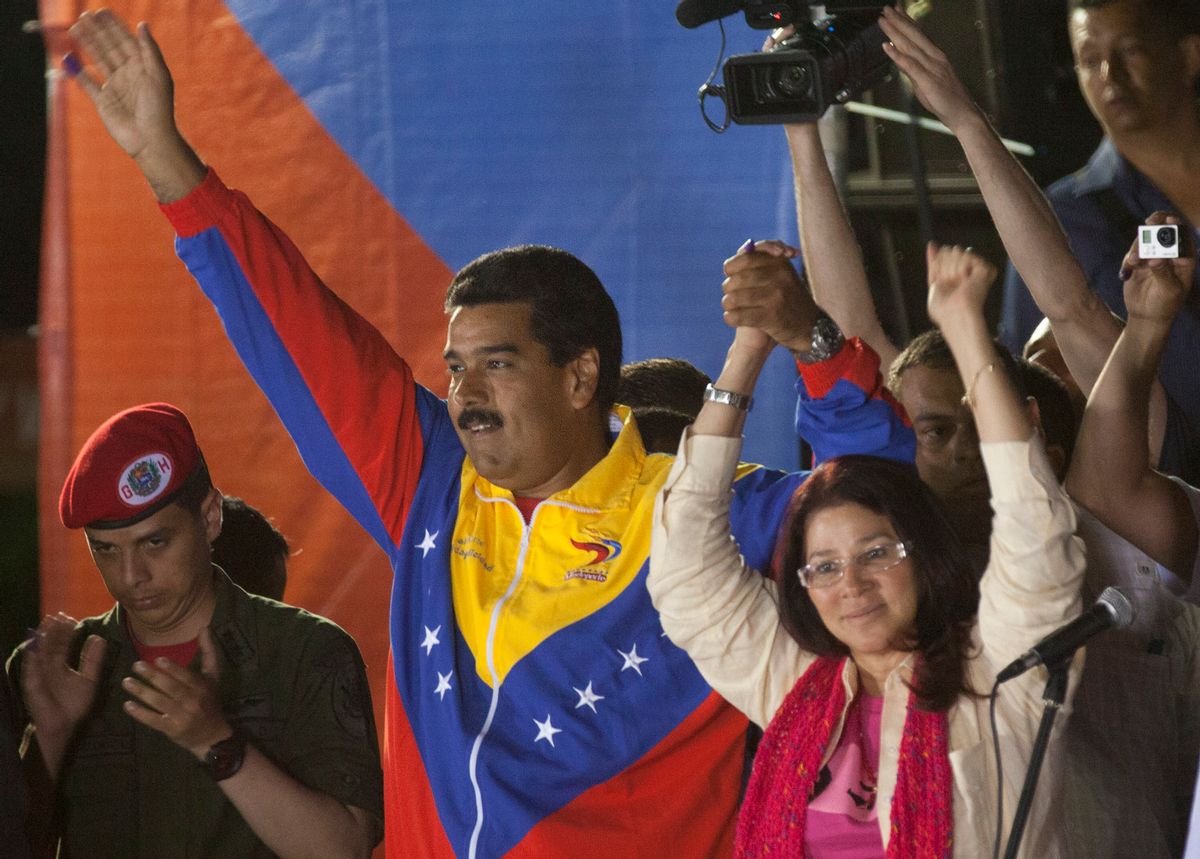 Hollywood progressives such as Oliver Stone and Sean Penn champion the government for its anti-poverty programs, while conservative pundits thunder that a "dictator" left Venezuela in shambles.

As Venezuela on Wednesday marks the first anniversary of Hugo Chavez’s death, and the protests against his political disciple, President Nicolas Maduro, enter their fourth week, GlobalPost sorts the facts from the myths regarding Venezuela.

1. Latin America is wild about Chavismo

Many on the left believe that Chavismo, the leftist movement launched by the late Hugo Chavez, has the backing of most Latin Americans. That’s not borne out by the research. Latinobarometro, a Chilean nonprofit that tracks public opinion in 18 countries in the Americas, found Chavez’s approval rating was mildly negative across the region for much of his time in office. On a scale where 0 indicates “very bad” and 10 “very good,” he scored between 3.9 and 5 over the period 2005-2011. Although there are no similar studies on his political heir, President Nicolas Maduro, there are reasons to believe he may be faring worse than his mentor. He won last April’s presidential election — amid a national outpouring of grief over Chavez’s untimely death from cancer — by a razor thin margin, 50.6 percent to his opponent’s 49.1 percent. Venezuela’s deep-seated economic problems have reached crisis proportions since Maduro took office, while even some of his supporters acknowledge he lacks Chavez’s personal appeal. Within Venezuela, Maduro’s popularity is falling. According to one study by pollster Datanalisis, his government’s approval fell from its peak of 55 percent to41 percent last November.

2. The opposition is a bunch of “fascists”

Maduro routinely dismisses the entire Venezuelan opposition as “fascist” and “coup-mongers” — even as he calls for national reconciliation. He gets away with it in part thanks to the US-backed 2002 coup attempt against the democratically elected Chavez, an event that discredited the Venezuelan right for years. But just how right wing is the new wave of younger opposition leaders? Not very, if you pay attention to what leaders such as Henrique Capriles, who narrowly lost to Maduro last April, actually say. His Democratic Unity alliance says it’scommitted to establishing a social security system “that works for all,” and strengthening the missions, Chavez’s revered social programs targeting the poorest. Capriles has also spoken out against discrimination against gays — in response to homophobic comments from Maduro highlighting his opponent’s singleton status. Meanwhile, the small Popular Will party of Leopoldo Lopez, the jailed leader awaiting trial for allegedly inciting anti-government violence, is affiliated with the Socialist International movement. To be a member, you don’t actually have to be socialist, but you do at least need to uphold European-style “social democratic” principles. Within the US, Capriles and Lopez might possibly feel at home somewhere on the moderate wing of the Democratic Party. As Harvard political scientist and Latin America expert Steven Levitsky has pointed out, their problem is not that they are “fascist” but that they are “posh,” a serious political handicap in a country still wracked by poverty and conditioned by 15 years of class war rhetoric

3. Chavismo is good for the poor

If Maduro and Chavez have a single claim to justify their combined 15 years in power, it’s that they have significantly benefited Venezuela’s poor majority. No one seriously questions that the percentage of Venezuelans classed as poor has dropped from around 50 percent to 30 percent over that period. The problem is that many other countries in Latin America, including staunchly free-market economies Chile and Peru, have registered similar progress over the same period. Just take a look at this graph by Argentine economist Lucas Llach. Meanwhile, the Venezuelan Violence Observatory, a research nonprofit, confirmed to GlobalPost that most of the victims of the horrific violent crime overwhelming Venezuela are poor. The country’s food scarcity and eye-popping inflation — 56 percent last year — also hurt the poor more than the rich, many of whom live in heavily guarded gated communities and have offshore dollar bank accounts. As if that wasn’t enough, there are serious doubts about the sustainability of Chavez’s social programs, which rely heavily on funding from the ailing state oil company Petroleos de Venezuela SA (PDVSA). It accounts for a staggering 96 percentof Venezuela’s exports and half of all government revenue from taxes. Any new administration wanting to maintain or improve the missions will first have to take the painful steps of sorting out Venezuela’s economic meltdown, and ending its addiction to easy petro-dollars.

4. The United States has influence

Some in the United States want the Obama administration to take a stronger stance against the Venezuelan government, most notably Sens. Marco Rubio (R-Fla.) and Bob Menendez (D-New Jersey), who are pushing for “targeted sanctions,” including visa bans, for Maduro and his senior officials. Although the US has much at stake in Venezuela — not least the 750,000 barrels of oil the US imports from the South American nation each day — Washington might do well to remember how it came to be viewed with such hostility in the South American nation. Many Venezuelans remember bitterly George W. Bush’s support for the failed 2002 coup against Chavez. That memory still provides high-caliber ammunition for Maduro’s speeches railing against US “imperialism.” Even the Venezuelan opposition now avoids being seen to associate with US officials. Using proxies to pressure the Maduro administration won’t work either, given the echoing silence coming from most Latin American leaders about events on the ground in Venezuela. Possibly, the smartest US strategy would be to do nothing, beyond offering verbal condemnation of Maduro’s repression, and let his government run aground all on its own. That appears to be exactly what the Obama administration is doing.

The anti-government demonstrations roiling Venezuela are based on a key premise: Street protests could actually topple Maduro, forcing him to quit in the face of overwhelming public anger. This strategy, promoted by Lopez, even has a name, “la salida,” meaning “the exit.” Unfortunately for the protesters, independent commentators, including even those highly critical of Chavismo, almost unanimously disagree. Maduro may well be a weak president, whose legitimacy rests on a disputed election and the personal blessing of Chavez as he was dying from cancer, but Venezuela is not Ukraine, they argue. As Eurasia Group President Ian Bremmer points out, unlike the ousted Ukrainian leader Viktor Yanukovych, Maduro has control of the military, police and congress, not to mention PDVSA, the goose laying the golden eggs for Venezuela’s sinking economy. Meanwhile, the poor have yet to join the largely middle-class protests in the kind of numbers that would prove that Maduro really has lost the bastion of Chavismo’s traditional support, Venezuela’s put-upon underclass. Barring surprises, Maduro looks well able to hunker down and withstand the current wave of protests.