It's all Seth Rogen's fault! Wingnut blames "Knocked Up" for glorifying weed

Bill Bennett's producer spars with an ex-cop, warns of "new generation of potheads" 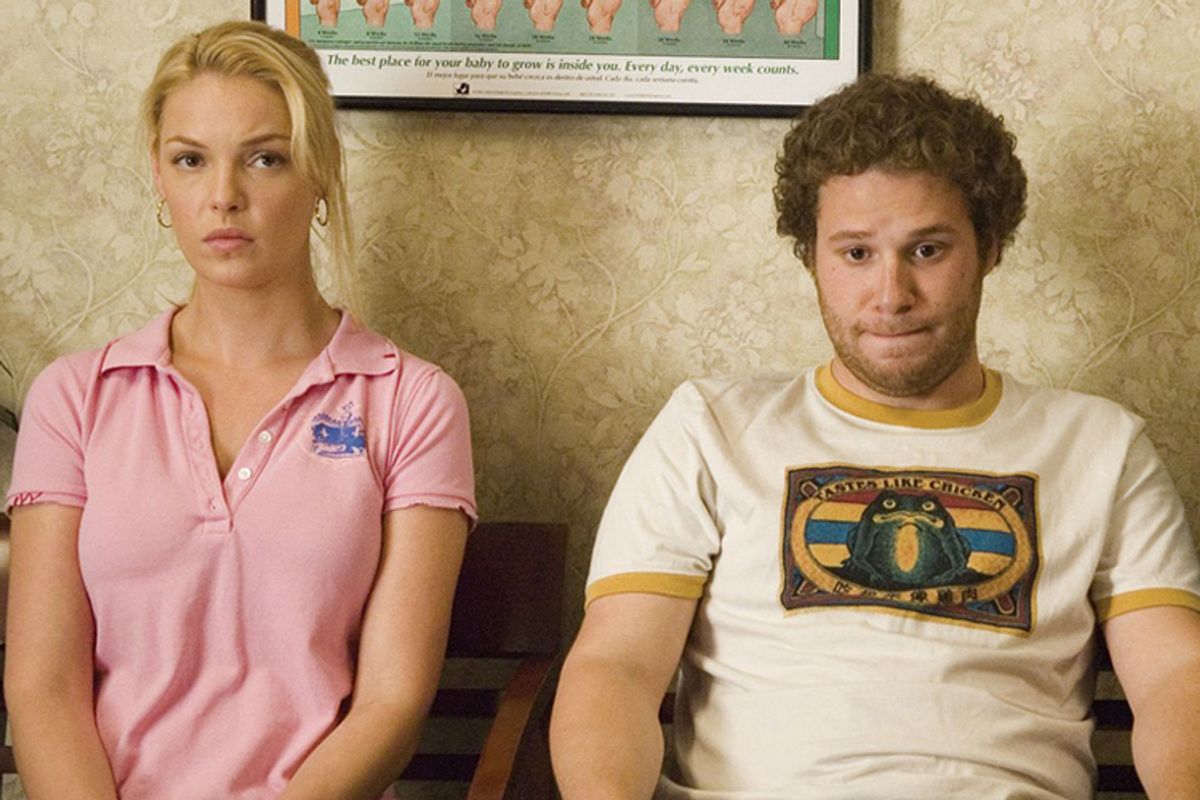 Katherine Heigl and Seth Rogen in "Knocked Up"
--

At a spirited and contentious CPAC panel on pot, an ex-drug czar’s radio producer debated a journalist who joked she’d been branded an accidental “weed girl,” had a testy exchange with an ex-cop, condemned movies like "Knocked Up," and suggested Singapore has boosted educational attainment by executing drug dealers.

“If you get caught in Singapore with trafficking any drugs, you’re basically put to death,” said Christopher Beach, the executive producer of Reagan drug czar Bill Bennett’s radio show. “Now, no one here is advocating that in any way. Although the numbers in Singapore -- I mean, drug use is extremely low … Also, interestingly enough, Singapore educationally is, last time I checked, 1 or 2 in the world education-wise. I think that’s because its students aren’t having to deal with passing drug dealers on the way to school.”

Beach made those comments in response to a question from Reason editor Matthew Feeney, who’d suggested that the persistence of drug use even under the Singapore regime might be cause for skepticism about the drug war’s potential. The exchange came midway through a cordial but impassioned Thursday afternoon panel debate between Beach and HotAir.com editor Mary Katherine Ham, moderated by Colorado state Rep. Janak Joshi.

“Why do we want to give people permission to use a drug that we know harms them, and we also know just makes them dumber …” asked Beach, who noted he had joined the panel because his boss, Bennett, was unavailable. “Do we really need more dumb people in America right now?” In a “dangerous and competitive world,” added Beach, “I don’t think [America]’s going to catch up by enabling a new generation of potheads.”

“Not everything is advisable for society,” argued Ham, “and yet not all of those things have to be illegal.” Citing dramatic disparities between arrest rates of black and white marijuana users, Ham told the crowd, “The problem is not just the inequality of that. The young people that I grew up with -- if you are put through the ringer of the criminal justice system … that process, I concluded, from knowing people who went through it, was far more damaging than smoking weed every now and then.”

Beach and Ham clashed over how marijuana legalization would affect the potency of the drug, the prevalence of drinking or smoking, and the power of drug cartels. “I do not think these people [in cartels] are worthy of our compassion,” declared Beach. “But you’re not lightening up on them by depriving them of a large part of their revenue,” countered Ham. Beach conceded that the “societal cost of marijuana” is “smaller, of course,” than that of alcohol and drugs, but contended that was “not a good argument” for legalization, because “the other two aren’t going to go down” by legalizing pot. Had we known earlier that nearly half a million people a year would die from cigarettes, argued Beach, “we might have reconsidered,” or handled them “a different way …”

Beach’s view was decidedly in the minority in the presumably self-selecting audience (one of six simultaneous CPAC panels). When he argued that the war on drugs “is expensive, but yes it has worked,” several people laughed. A battery of audience members directed critical questions at Beach, including Law Enforcement Against Prohibition co-founder Howard Wooldridge, who asked him, “How do you justify, morally, the death of dozens and dozens of kids every year selling marijuana, on the altar of prohibition?”

Beach asked Wooldridge to read aloud his T-shirt -- “Cops say legalize pot … Chase bad guys, not Willie” – and then retorted, “I would say don’t smoke the evidence either.” Wooldridge shot back, “That’s an inappropriate comment,” saying he hadn’t smoked in 35 years and that the claim “that marijuana makes you stupid” was a “red herring,” and saying marijuana was no more dangerous behind the wheel than alcohol.

Beach responded that “alcohol is bad” as well, and then, responding to Wooldridge’s claim the drug war had failed, said culprits, including “mixed signals from Hollywood,” had stemmed the effectiveness of prohibition. Decrying moves like “Knocked Up” that “glorify pot,” Beach argued, “kids watch these movies in high school more than they read their history books.”

“I watched ‘Friday’ about 30 times in high school,” countered Ham. “And yet I do not smoke weed now.”