GOPer touts Pope Francis: “He won’t change a single policy. But...he’ll go out there and talk about the good news" 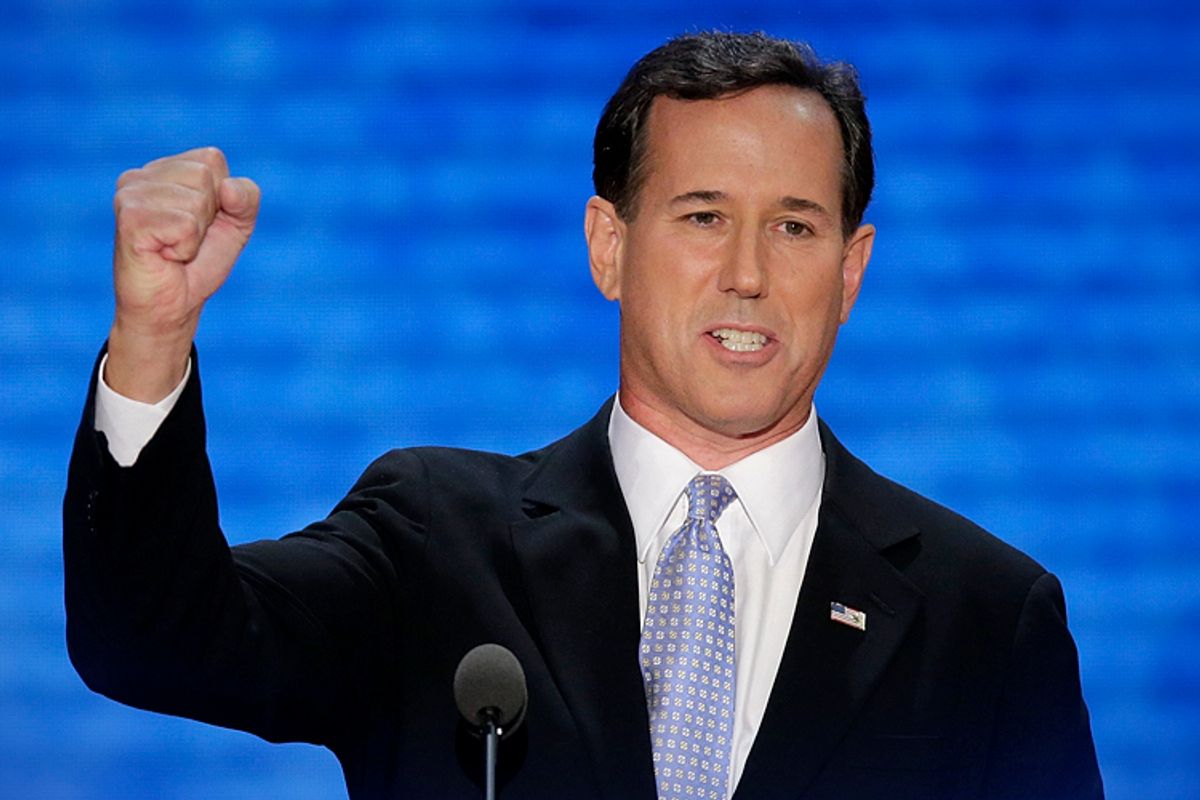 Rick Santorum knocked unnamed fellow CPAC speakers Friday afternoon, opening his speech to the conservative confab by saying he’d been hearing “a lot of ‘we have to win.’”

“They actually mean we have to lose,” he warned the crowd. “We have to lose those currently unfashionable stances on cultural and limited government issues that have been proven over time to give Americans the best chance for a happy, healthy life.” In a stretch of his speech that, like a State of the Union address, appeared to consistently draw applause from the same sections of the audience, Santorum charged that GOP leaders “keep apologizing for the principles they believe in, and then they wonder why they lose.”

The 2012 presidential candidate said the media had erred in attributing his appeal (winning “more states than any second-place finisher since a guy…named Reagan”), to just being a cultural conservative, when in fact “everybody in that race was a cultural conservative.” Instead, Santorum – and his billionaire funder Foster Freiss, who introduced his speech - argued that what set him apart was his ability to connect with working Americans. “All we’re talking about is cutting taxes for high-income people - it doesn’t exactly connect emotionally,” said the former Pennsylvania Senator, offering his campaign plan to cut taxes on manufacturing companies as a policy with more blue-collar appeal.

“We are the party who has the policies that will work best for these folks,” Paul told the crowd. But he said that Republicans were “out there talking as if everybody who’s a voter is like us: sort of high-energy, “Type A” folks who want to reach for the brass ring… We also need folks who are going to work 9 to 5, and coach little league.”

Santorum emphasized that Republicans should not talk about the “middle class,” because that was “class-envy leftist language that divides America against themselves. Classes in America? Do we really accept the fact there are classes in America?”

He illustrated his frustration with Republican focus on the rich, and his aversion to class struggle, in an anecdote recalling the 2012 RNC’s outsized focus on Obama’s alleged “you didn’t build that” slight. “We trotted out small business person, after small business person…after larger business person,” said Santorum. But “we didn’t send one server at a restaurant to go out there on that stage, and talk about how grateful she was that her employer sacrificed a lot to create a job for her. And then, we didn’t have that employer walk out on that same stage, put his arm around that server, and say, ‘I thank god for the work that you’re doing.’”

Santorum tied his case for focusing on “working Americans” to a case for focusing on marriage. Without directly referencing gay people, the ex-senator said he didn’t want “to talk about redefining marriage,” but rather about “reclaiming marriage as a good for our society” and economy. Citing the example of anti-smoking efforts, he urged renewed effort by government and business to promote marriage, and decried that “in neighborhoods, there are no dads.”

Santorum, whom Friess had introduced by saying he didn’t know anyone in the room who’d “seen more persecution than Rick Santorum,” closed his speech to get mere “railing on Obama…out of your system,” and to take a page from Pope Francis. “He hasn’t changed a single policy,” said Santorum. “He won’t change a single policy. But what he’ll do is he’ll go out there and talk about the good news…What we need to do is talk about the news of a good America.”