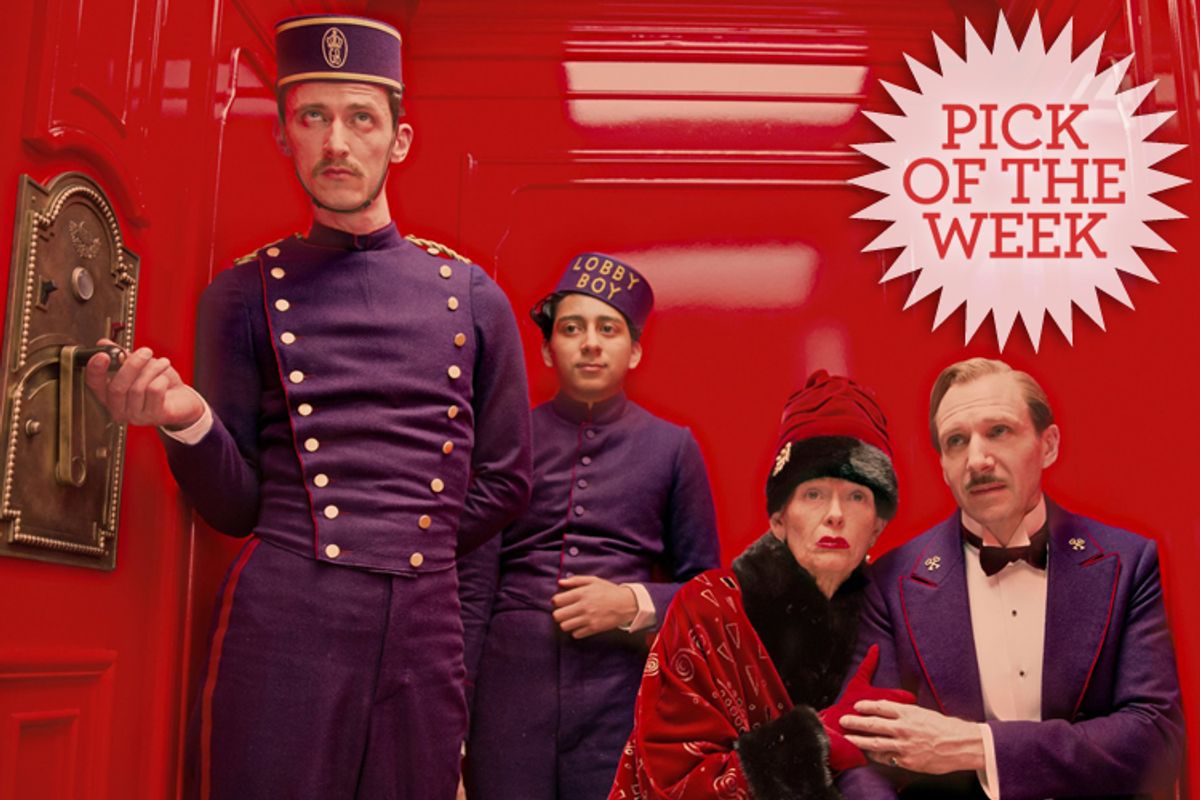 Wes Anderson is sometimes accused of building dioramas or puppet theaters rather than movies, of being more concerned with production design and with a tone of mannered or precious “kidult” whimsy than with telling a story. There’s an element of truth to that criticism, and indeed that tendency reaches its apotheosis in “The Grand Budapest Hotel,” an elaborate and delightful work of tragicomic confectionery set at an imaginary resort in an imaginary country (partly constructed with miniatures) that depicts the interwar years in Europe largely as a set of high-society high jinks out of 1930s Hollywood comedies. Anderson’s cast features one of Ralph Fiennes’ best performances and is loaded with peculiar delights, including cameos by Bill Murray and Owen Wilson. His script is loaded with zingers and divided into chapters with on-screen titles, while the camerawork — by Robert Yeoman, shooting on 35mm film, of course — whips around the set like Bugs Bunny outrunning Elmer Fudd. This is one of Anderson’s funniest and most fanciful movies, but perversely enough it may also be his most serious, most tragic and most shadowed by history, with the frothy Ernst Lubitsch-style comedy shot through with an overwhelming sense of loss.

I can fully understand that Anderson’s overdecorated, overstylized and highly self-conscious movies aren’t for everyone, but at least some of the criticism rests on a faulty philosophical or aesthetic footing. Do movies made in a more naturalistic mode, like mainstream comedies and dramas with their formulaic three-act plots, actually do a better job of reproducing human relationships or social reality? What about movies set in outrageously artificial universes, like action films or thrillers, where we simply agree to overlook the fact that everything that happens is wildly implausible? To move the question to a larger frame, since when are the movies supposed to create a convincing simulacrum of reality? American cinema, which remains the medium’s dominant model, hardly ever does and hardly ever has.

What irritates some people about Anderson’s films, I suspect, is the fact that their artificiality is right there on the surface. He resists both the convention of verisimilitude — where we accept certain kinds of ludicrous stories and settings as “realistic” because of the clothes and the cars and the dialogue — and the convention of psychological realism, in which characters will be revealed and explained, will change and grow, over the course of the three-act narrative. This leads in turn to the mistaken conclusion that there’s something childish or trivial about Anderson’s movies, that they consist entirely of wistful, privileged navel-gazing and never engage serious moral or emotional themes. That was never entirely fair, and it’s become more obviously untrue in his recent films. If the equally wonderful “Moonrise Kingdom” was a movie about the loneliness of adult emotional life wearing the skin of a teen romance, “The Grand Budapest Hotel” is a light comedy about the destruction of Old Europe and the perplexing nature of cultural memory.

M. Gustave, the rakish and demanding concierge played by Ralph Fiennes in “The Grand Budapest Hotel,” is never revealed to us in that change-and-grow, emotional-journey sense. (He goes on a journey, all right, but a stolen Renaissance painting and a bobsled borrowed from an Alpine monastery are involved.) Like nearly all Anderson characters, M. Gustave is inextricable from his setting; in a sense it’s not clear where one ends and the other begins. We never learn anything about his childhood, his parentage or his education outside the magnificent eponymous establishment, a school of hard knocks furnished in velvet, satin and exquisite little chocolate bonbons. If Gustave’s accent suggests a working-class Englishman who has clawed his way to relative privilege, his vocabulary suggests a Yank striver putting on airs. We don’t know and it doesn’t matter; his corruption, pretension, vanity and nobility are those of the hotel itself. Late in the movie, someone who knew him well observes that M. Gustave belonged to an era that had already ended before he came along – and that was only one of the occasions when I wondered about parallels between M. Gustave and Wes Anderson.

Perhaps M. Gustave is the protagonist of “The Great Budapest Hotel,” but even that is not clear. Certainly he is the film’s charismatic centerpiece, but Anderson’s screenplay (from a story he conceived with Hugo Guinness) spins M. Gustave’s tale as the third of three nested narratives, a story within a story within a story. Anderson has specifically cited the influence of Austrian novelist Stefan Zweig, who committed suicide during World War II, but at certain moments I couldn’t help thinking of Vladimir Nabokov, another European exile with a half-jaundiced, half-nostalgic view of the Old World. In the first layer, set in the mid-‘80s, a writer in late middle age (Tom Wilkinson) tells us about his visit to the Grand Budapest in 1968, when the once-glorious resort had fallen into Communist-era decrepitude, complete with hideous orange carpeting and fluorescent strip lighting. In that story, the writer as a younger man (Jude Law) becomes fascinated by an enigmatic older gentleman named Mr. Moustafa (F. Murray Abraham), who sits alone in the lobby but is treated with great deference by the hotel’s bored and desultory staff. (Anderson found his hotel — actually a former department store — and most of the film’s other exteriors in Görlitz, an unusually well preserved town in eastern Germany.)

Moustafa, it turns out, is the hotel’s owner, or at least he was before the Grand Budapest, and everything else in the fictional nation of Zubrowka, became the property of the state. It is he, in the course of a long dinner conversation with Law’s character, who tells us about his early life as a war refugee who became a “lobby boy” in the Grand Budapest, where he fell under the spell of the entirely reprehensible but irresistible M. Gustave. Played as a boy by the wonderfully deadpan Tony Revolori, the Zero Moustafa of the 1930s is a stranger in a strange land, an unspecific ethnic outsider (is he Arab? Jewish? Armenian? We never know) who worships M. Gustave as an embodiment of European propriety even through revelations that the latter is a cad, adventurer and hypocrite who’s running a lucrative side operation as a gigolo for rich and ancient ladies.

One of these ladies, Madame Céline Villeneuve Desgoffe und Taxis (played, briefly and hilariously, by Tilda Swinton), has recently departed this mortal coil, leaving M. Gustave a priceless painting and setting off a farcical round of double-crosses, chase scenes and murders that’s about as important as the plot in most Marx Brothers films. Adrien Brody plays Madame D.’s enraged son, who’s affiliated with a Zubrowkan political movement involving black jackboots and leather trench coats, which begins to seem slightly more sinister and familiar as the story progresses. Willem Dafoe, monosyllabic and terrifying, is his brutal right-hand man. Goodness, it would take too long to delineate all the great moments provided by this cast of Anderson regulars mixed with newcomers: Edward Norton as an upright military officer, Mathieu Amalric as a butler, Saoirse Ronan as the Zubrowkan baker’s apprentice who becomes young Zero’s paramour, Jeff Goldblum as a methodical attorney. Through it all moves Fiennes, slinging his Anglo-gangster quips in all directions, simultaneously standing for starched-shirt rectitude and unashamed debauchery.

Beneath the zany, colorful and exceptionally entertaining caper on its surface, “The Grand Budapest Hotel” is also a tale of tragedy and doom, and one that’s a lot more sophisticated about politics, history and nostalgia than it appears to be. Anderson has also mentioned the influence of Irène Némirovsky’s best-selling World War II novel “Suite Française” and the historical chapters of Hannah Arendt’s “Eichmann in Jerusalem,” and unlikely as that sounds you can feel it. On one hand, while M. Gustave is a phony and a con man, he isn’t a murderer or a maniac, like those who will overthrow his world. On the other, the old order of Europe he claims to venerate (and steals from) gave birth to monsters and ended in apocalypse. The Grand Budapest got Soviet-orange carpeting and then was torn down; Zero Moustafa and the Law/Wilkinson writer and Wes Anderson and you and I are left to look back at the lost past in mingled longing and horror, just able to see it but not quite to grasp it.