The surprising reason Americans might be obese, anxious and depressed 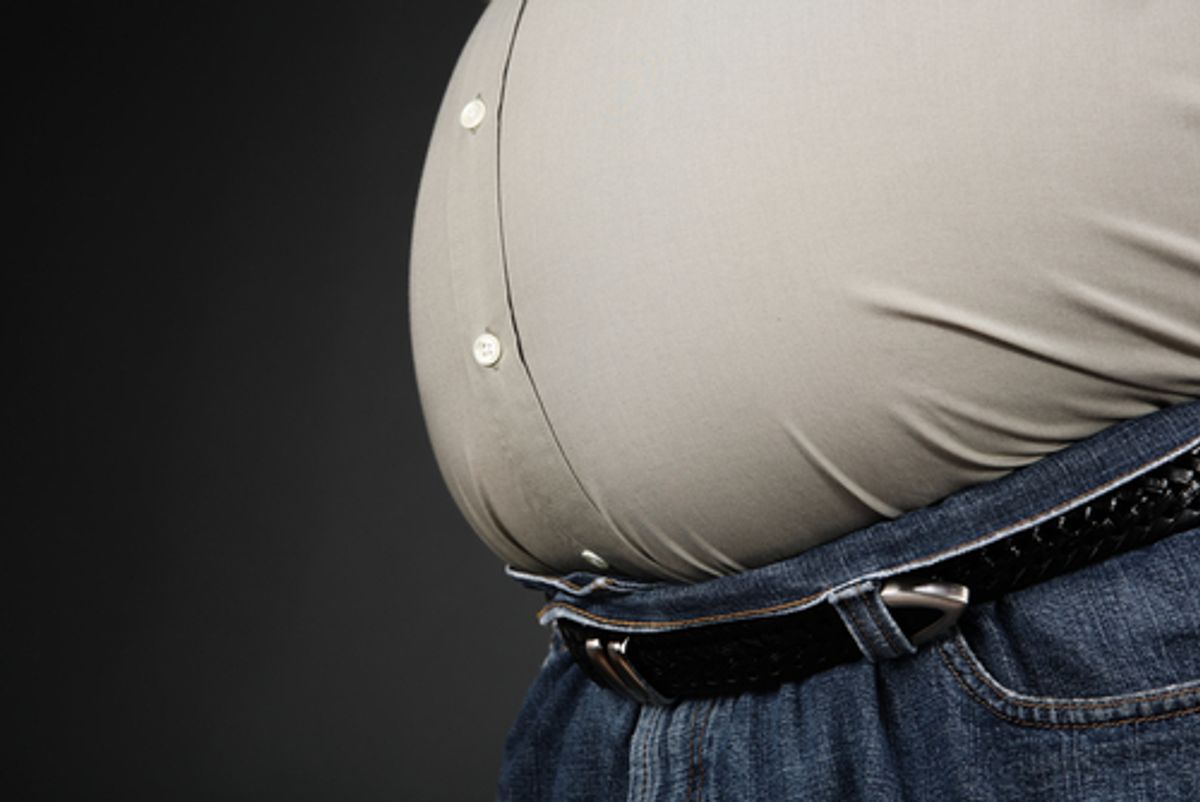 Do you remember the "hygiene hypothesis" of the late 1990s? It theorized that humans had so over-sanitized their environment with disinfectants and hand cleansers, our immune systems were no longer doing their jobs. So many consumer products like toothpaste, hand and dish soap, laundry detergents and even clothes now include antibiotics, said the theory, we seldom encounter the "bad" germs our immune systems are supposed to recognize and fight.

Since the hygiene hypothesis surfaced, there is growing evidence of its truth. In fact the theory that certain medical conditions, especially autoimmune ones, may be caused by a changing or declining bacterial environment in the human gut is gaining momentum and now called the "disappearing microbiota hypothesis."

The bacteria in our gut, collectively called our microbiome, is a huge, ever-changing universe of billions of microbes. Each person's intestinal ecosystem is so individualized and such a reflection of his unique inner and outer environments, "gut microbiota may even be considered as another vital human organ," says one scientific paper. The microbiome has also been called a second genome and even a second brain.

Most people know that taking antibiotics can change their microbiome by killing off the "good" bacteria with the bad. That's why antibiotics can cause diarrhea and many clinicians recommend taking probiotics with them. But what scientists are just beginning to learn is microbiomes are also affected by their outside environment including influences like house dust and even aerosolized matter when a toilet is flushed. They are also learning that gut bacteria is highly adaptive and one person's gut bacteria will take root and flourish in another's intestines. This explains the growing popularity of "fecal transplants" (yes, you read that right) between people who have been depleted of "good" bacteria and donors with healthy populations of microbes in their intestines.

Still, the most astounding research that is developing around the microbiome is the ability of our gut bacteria to affect our brain and "influence our mood and temperament," says food expertMichael Pollan. "If you transplant the gut microbiota of relaxed and adventurous mice into the guts of timid and anxious mice they become less stressed and more adventurous."

Here are some conditions which could be linked to the state of your gut bacteria.

One of the most detested microbes in the Western world is H. pylori which causes both acute and chronic gastritis and peptic ulcers and is highly correlated with gastrointestinal-related cancers. But even as antibiotic treatment has reduced and almost eliminated H. pylori in the gut of many humans in Western countries, there is a downside to H. pylori eradication. In the same time frame that "H. pylori infection rates have dropped from > 50% at the beginning of the 20th century to < 10% at its end…the incidence of many immune disorders has increased at an alarming rate," says a 2012 paper in the journal Gut Microbes. "Among these are allergic diseases such as hay fever, eczema, and asthma, but also auto-immune diseases (multiple sclerosis, type I diabetes) and chronic inflammatory conditions such as inflammatory bowel disease." Asthma is especially on the increase, say epidemiologists, growing by 28 percent in all US adults in the last decade and 50 percent in African-American children. Now researchers are asking whether H. pylori had provided asthma protection such as suppression of allergic airway disease and other immunomodulatory properties and whether the microbe could be harnessed for asthma prevention and treatment.

There is only one affliction that seems to be growing as fast in the US population as asthma, and that's obesity. The waning influence of H. pylori may also be a factor. In some countries less than 10 percent of school children now carry H. pylori anymore, say researchers, and "at the same time, the incidence of obesity among the same population group has been observed." H. pylori influences the hormones leptin and ghrelin, both of which affect weight and body mass. The increase in obesity also correlates with the indiscriminate use of antibiotics on factory farms, says a paper in Frontiers of Public Health and cannot be fully explained by "excess food energy intake, changes in diet and eating behavior" and increasing sedentary lifestyles. Antibiotics likely increase weight in livestock by strengthening microbes that absorb nutrients, so why would they not increase human weight in the same way? Both obese mice and humans have lost weight when the intestinal microbes of lean mice and humans were insertedinto their systems. And there is another environmental source of antibiotics. Triclosan, found in products like Colgate's Totaland Ajax and Dawn dish detergent is an antibiotic that also acts as an endocrine-disruptingpesticide. Traces of it have been found in earthworms from agricultural fields andAtlantic dolphins. Endocrine disrupters like Triclosan are also suspected of causing early pubertyby impairing hormonal regulation.

Could the microbes in your gut—or lacking in your gut—actually affect your mood? Yes, say several studies in medical journals, which link gut microbes to depression, anxiety, stress, mood disorders, and even eating and sleep disorders! Cross-reacting chemicals may provide a link between your brain and your gut and "Alteration of this link may contribute to several neuropsychiatric disorders, emphasizing the key role of nutrition among other factors influencing gut content and intestinal permeability," says an article in the journal Current Opinion in Clinical Nutrition & Metabolic Care. Gut bacteria influence the behavior of serotonin, dopamine and GABA—three substances many psychiatric drugs target. Many recent studies in scientific journals are exploring the link between your brain and gut, now referred to as the "microbiota-gut-brain axis." "The expression 'thinking with your gut' may contain a larger kernel of truth than we thought," writes Michael Pollan. Depression may also be caused by another action in the gut, inflammatory responses says another paper in the scientific literature which postulates that is why it is so "common in the context of autoimmune and inflammatory diseases."

Remember the old explanation for acne—that it was caused by chocolate, fried foods or pizza? Increasingly, scientists are linking acne to what’s going on in the gut, so maybe the original theories had a kernel of truth. While acne has traditionally been treated with antibiotics to kill the "bad" bacteria, the idea of adding "good" bacteria in the form of probiotics is now gaining favor. It is a "gentler and more effective way to ease problem skin," says Huiying Li of the David Geffen School of Medicine at the University of California, Los Angeles. Researchers know now that not all bacteria linked to acne are bad. Some may cause problem skin, but other appear to protect the skin and keep it healthy and the latter may have genes that may even fight the former, researchers now suspect. A 2013 study in Journal of Cutaneous Medicine and Surgery suggests that probiotics "may be considered a therapeutic option or adjunct for acne vulgaris" and an article in Gut Pathogens agrees that gut bacteria "have important implications in acne." The research is so promising, a project at the Genome Institute at Washington University is now underway "to investigate the relationship between acne and the microbiome, or community of microbes, residing underneath the surface of the human skin."

Research is still preliminary, but gut bacteria may also play a role in childhood  problems. James Greenblatt, a psychiatrist and clinical faculty member at Tufts Medical School, successfully treated a teenager with obsessive-compulsive disorder (OCD) and attention deficit hyperactivity disorder by boosting her "good" bacteria with high-powered probiotics reported ABC news. Symptoms begin to subside after six months and after a year, they had disappeared and the patient had recovered. Studies have also found a byproduct of one gut bacterium elevated inautistic children. "Researchers need to complete additional studies to confirm the existence of abnormalities in autistic individuals intestines," said an article in Alternative Therapies In Health And Medicine. The gut bacteria of a mother may even affect her baby. Researchers now suspect the reason babies born by C-section are more likely to be overweight or obese by the time they are adults is because they are deprived of important bacteria from the mother during the birth process. "Members of the mother's gut microbiota are transferred to the child during vaginal delivery," say researchers and "caesarian section leads to an altered colonization pattern of the infant's lower intestine."