Ware explains why he doesn't read his work, and why there's less and less time for art at his daughter's school 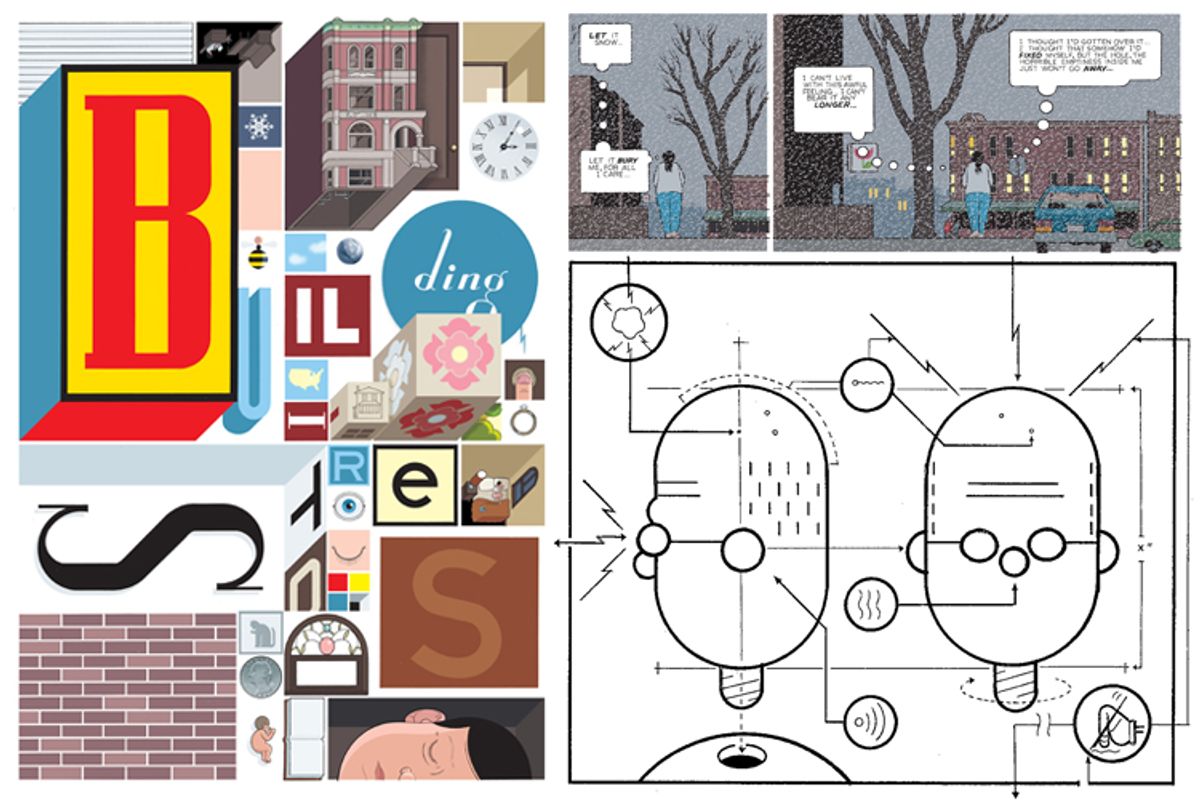 On Feb. 18, 2014, cartoonist Chris Ware took part in a conversation with his friend Chip Kidd as part of the Portland Arts & Lecture series. Kidd, a gregarious, award-winning book designer and graphic novelist, joked with Ware as they talked through Ware’s development as an artist.

It took Ware many years to complete the boxed set "Building Stories" (2012), a complex exploration of a Chicago brownstone and its inhabitants, especially a woman with a prosthetic leg. His drawing style is clean and charming. Pages of wordless panels might focus on someone sleeping. Yet when the character wakes and thoughts break in, they’re often bleak, detailed in Ware’s meticulous handwriting.

Composed of 14 objects, from broadsheets to small books to a foldout game board, "Building Stories" lets the reader break apart the traditional narrative impulse of tracking a beginning, middle and end -- chronological time, point of view and focal point on a page (if there is a page) are all up for grabs. Even the heavy rectangular box presents a message. Its back has a diagram of the contents and where they might be read.

Ware said he wanted the set to replicate the process of meeting someone new. We start in a moment, generalize about their clothes, actions and gestures, then slowly put the pieces together.

Five to six years into the "Building Stories" project, he and his wife became parents. He said, “I didn’t have a child; then the child divides the entire life” into before and after. His recent New Yorker covers burrow into modern family complexities. The cover, titled “Threshold” (for the Jan. 7, 2013, issue), appeared after the Newtown school shootings. The image shows backlit urban parents watching anxiously as their children enter a school’s hallway, shepherded by a teacher.

Ware comes from a family of journalists, including a great-uncle who wrote a Pulitzer Prize-winning essay on a race riot in 1919. “I became a cartoonist,” he added. “The DNA strand broke.” Ware responded to email questions after he returned to Chicago from Oregon. When he writes about his daughter’s talents, it’s clear the DNA strand is strong.

In Portland, you told me you love drawing with your daughter, and that she’s a better artist than you are. Can you explain more what you mean? I get the sense that you’re never satisfied with your art -- how do you keep that self-criticism from affecting your daughter?

I meant that she’s simply more relaxed, open and uncritical than I am. She even makes fun of me for it, drawing a complete comic strip in the time it takes me to letter two word balloons. She’s wonderfully resistant to suggestion, as well, almost always rejecting any editorial suggestion I might have for her, which I think is good. I hope she stays that way.

Kids often enter into writing by drawing and labeling pictures, but over time they learn or are told that drawings make the writing babyish, or are used as support and need to be removed from the final product. Yet our culture is extremely visual, and we’re constantly manipulated by images/words in advertising. How do you support your daughter as an artist knowing that school, in general, doesn’t support it?

You’re very smart to point out this ridiculous cultural contradiction. At a recent conference with my daughter’s teacher, I expressed my frustration with the increasing lack of time for her to draw in school, and her teacher said that the new Common Core standards not only didn’t include it, they didn’t allow for any extra time for what are considered “non-literate” endeavors. Of course, this attitude is asinine; one only needs to see the drawings that Nabokov did for himself to understand Tolstoy and even his own books. To controvert this, my daughter takes weekend art classes and draws on her own whenever she feels like it, and I’ve encouraged her to still take one of her sketchbooks to school regardless of what her teacher says. Maybe it’s even good to have something to “work against” at her young age, I dunno.

About two years ago I interviewed your longtime friend, the cartoonist Daniel Clowes, for the online arts journal Propeller. Because Dan has created themes about bullying, I asked him about a project at Salon in which writers interviewed bullies from their past. So I’m curious: What would you ask a bully from your past? Or which comic would you direct him/her to?

The chapter of “Rusty Brown,” which I titled “Lint” [published as part of the ACME Novelty Library series], was my attempt to understand the so-called bully mentality, and was sort of a condensation of various personalities of the kids who used to make my childhood miserable. I wouldn’t direct any of the real people to read it because I don’t think it would do any good, as I presume most of them have long outgrown if not completely forgotten their part in it. At the same time, one of my classmates did actually apologize to me once, which I greatly appreciated. Bullying is a relative phenomenon, actually; it’s all about pecking order, and the bully frequently finds him- or herself the bullied when someone who might be perceived as weaker enters the picture. At least that’s been my personal experience.

You’ve said how much Joseph Cornell has influenced you. Years ago I saw a show of his shadowboxes in New York City, and the gallery was fairly empty. The boxes were laid flat on small wooden tables, so you could get close and examine them. In Portland we saw slides of your sculptures that you said could be and should be manipulated. Have you wanted to move things around in Cornell’s boxes when you’ve seen them in real life? Is it enough to see a reproduction of his work, or is that frustrating to you? Would you want to own one of his boxes, or do you think they should be in museums for people to look at for that brief, transcendent moment?

I guess you’ve caught me in a feedback loop of my own devising here; he definitely wanted his boxes to be handled and affected by handling (so much so it makes one wonder how up he was on quantum theory, actually). I had the experience once of being at a party in Hyde Park in Chicago and seeing an imitation Cornell box on a coffee table, which I thought was sort of sweet. I found out later that it actually was a real Cornell box, and my memory of it completely changed, which gives one a real sense of how legend and the power of notoriety can change one’s perceptions of both art and reality. In short I don’t know how to answer this. I think it’s good most of his work is now in museums so that people won’t set drinks down on them, though.

My son and his dad have read "Tintin," "Bone," "Calvin and Hobbes" and other comics together for years, and my husband does all the voices. Do you talk to yourself in the characters’ voices as you create? Is that how you find a “soul” within the character?

I don’t, actually, and I don’t do readings of my strips, either; comics for me seem to demand that sort of soundless voice that only reading to oneself can provide; there’s something already almost vulgar in their physicality that introducing any more concreteness to it, at least in the case of my own stuff, doesn’t exactly help the experience. Plus I’ve found that trying to read comics out loud to my daughter necessitated my pointing at each character as I did the “voices,” which made for a very awkward sort of performance interface. Maybe it’s just my problem, though.

Do you visit exhibits or installations of so-called outsider art, visionary art, etc.?

I love Henry Darger’s work and A.G. Rizzoli’s, and it pains me to think of them as outsider artists when really they’re just artists. Such labels seem to have more to do with defining the strange monied world of art than with actually describing the work or the artists themselves.